Ban the boredom spring 2022: Sticky static, how Preservation Hall brings us all closer together

Editor’s Note: May we Mayke a suggestion? No, our suggestion is not that we stop using cringeworthy puns, but it is to think ahead! We know what’s coming: the summer. The time when the air is heavy, the tourists have abandoned ship, and us locals are left to enjoy our city, heat and all. That’s where we come in! All the month of May we are going to prepare you to “Ban the Boredom” by giving you the best places, the best restaurants, and the best event, but since we never do anything “normal” at ViaNolaVie, we are basing these suggestions around various psychological states! If you’re a total introvert, we’ve got a spot for you! If you have a disability, we’ve got the places that actually don’t discriminate and let you get down the way you want to get down. We’ve got something for everyone because New Orleans is the city for everyone! It’s often a place for tourists, but with tourists gone for the summer, writer Benjamin Patterson shows just what Preservation Hall preserves for New Orleanians. 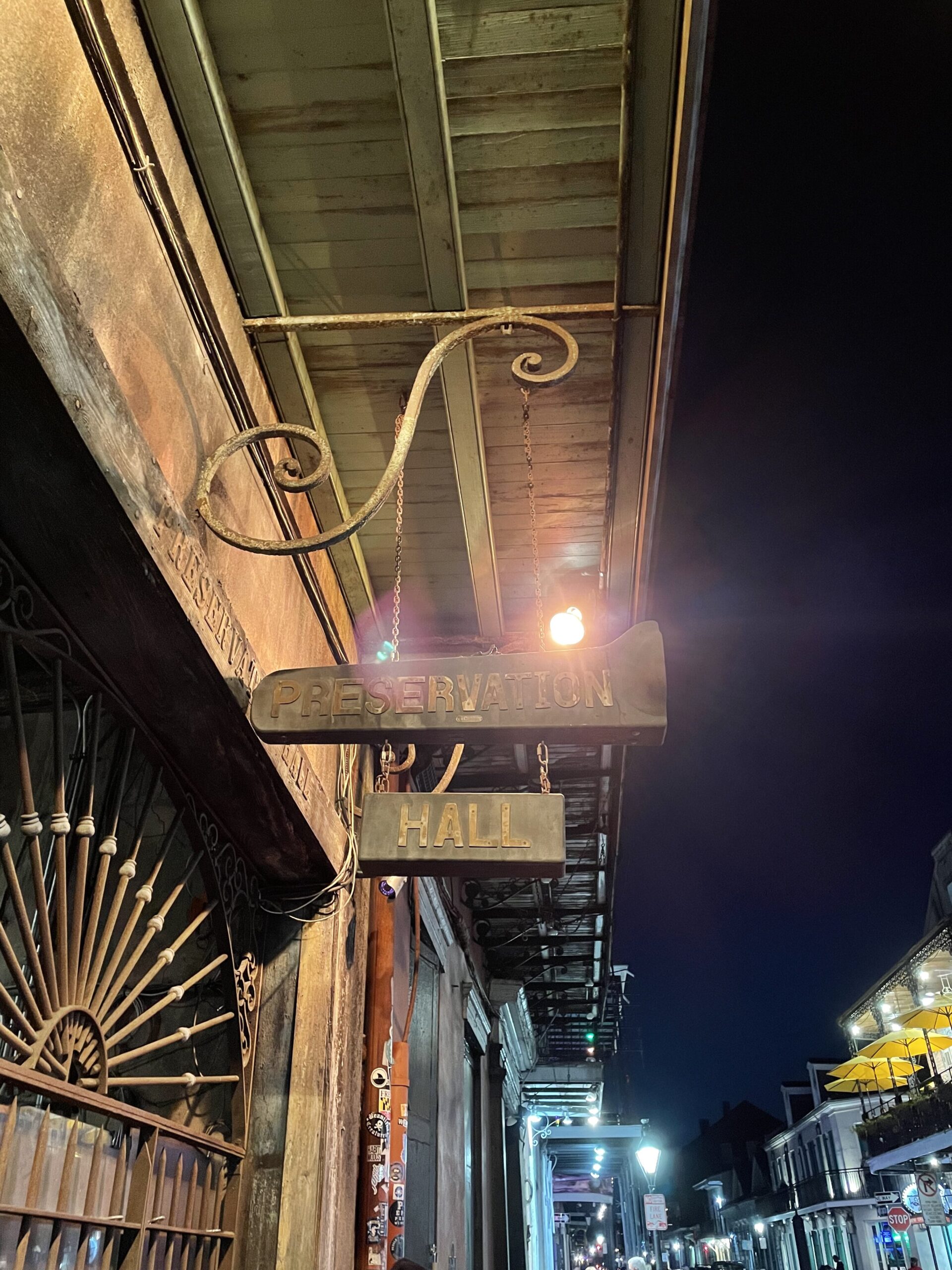 “Uh, you sure this is it?” my friend quivered while sliding open the doors of our Uber driver’s minivan. As we got out, surveying the ground beneath us to avoid craters disguised as potholes and foggy puddles of fire water, our eyes met. Accepting that it was too late to turn back, my friend looked back down and relaxed his jaw to the sound of our ride slowly bouncing down the street of

cracks and sunken concrete. “Trust me, man. Trust me,” I repeated over and over again. After a defeated sigh following some uncomfortable laughter, we sauntered up to the closed gate displaying aged metal work that separated us from the dim, exclusive

hallway within. The face of the building spelled “not up to code” with its rusted hinges bolted to decaying shutters that hung closed on the walls riddled with chipped plaster and bruised paint. Its golden brown color set it apart from the other colorful French Quarter buildings such as O’Brien’s. Above the slanted balcony riddled with wires and rusted supports hung two old instrument cases inscribed with some worn, mended brass letters that read:

The jazz venue is sandwiched between Bourbon and Royal St. The chaotic clubs and pubs on Bourbon house patrons that sing Piano Man out of tune while the tranquility of the Jackson Square park and riverwalk on Royal’s side welcome couples who might want to get intimate or others who need to sober up and reflect after their Bourbon St. marathon. Where these two drastically different environments collided, Preservation Hall stood, mustering up a kind of New Orleans limbo which isn’t a surprise considering the building’s long standing attachment to the history and culture of the city. The physical foundation, untouched since 1803, was a tavern before being converted into an art gallery that eventually housed the world famous jazz venue we know today. The establishment of the Preservation Hall group was actually an unintentional stroke of serendipity that stemmed from the many bands that performed during Larry Borenstein’s art exhibitions during the 1950s. Due to the group’s intense popularity among both tourists and locals alike, it was finally founded in 1961 with the goal of preserving traditional New Orleans jazz music. Since then, the building itself has stood by New Orleans through its highs (2010 Super Bowl victory) and lows 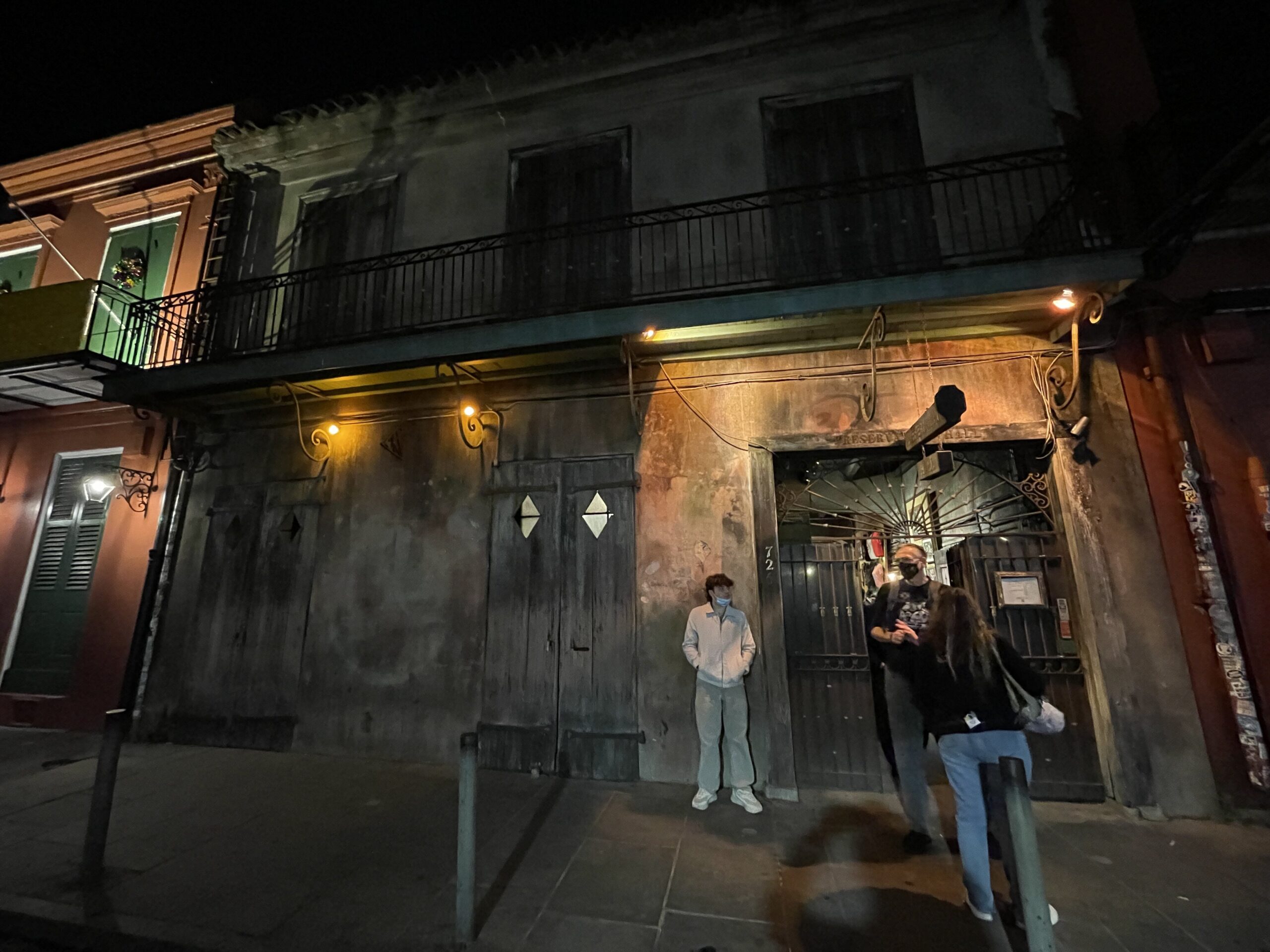 In front of Preservation Hall during a live sessions: visually quiet but audibly bustling. (Photo by: Ben Patterson)

(Katrina 2005). Although its sunken foundation may steer someone away, the faint laughter and music that squeak their way through the cracks sprawled across its walls and shutters yield the attention of about 150,000 visitors per year. I wanted to find what lay underneath the rough exterior of the venue that could consistently attract this amount of modern consumers.

As my friend and I loitered under the abstractly tilted balcony full of rusty nails and railings, more patrons started to swarm behind us. The scent of rotting Victorian wood lined the shutters and the dim, cavernous hallway seemed to hide old secrets and treasures that drew them in like metal to magnets or gnats to scraps. The building must’ve housed sirens, putting its victims into trances before devouring their nerves, leaving nothing to waste.

We were met with the thick aroma of both wood and brass upon crossing the threshold into the shade. The hallway, with its

cobbled path and walls coated in various styles of art, served as a portal dividing the intense chaos that raged outside and the subtle coziness that cracked from within. In the main room, lowered lights coated the surfaces of aged and weathered planks in a warm shade of dark gold. Like static dust on vinyl, the room perpetuated an ambience that set a mood for the music to come later. Crooked paintings and portraits randomly dangled from all sides in an orchestral performance of chaotic originality. The venue was built like a colonial church exhibit with wooden, backless benches covering both the walls and floor. Up at the “altar”, the instruments sat waiting for the musical worship that would inevitably take place. The building rejected all modern amenities such as air conditioning, sound proofing, and amps to stay true to its uniquely antique core. This venue was the definition of “au naturale”. As the rest of the audience shuffled and packed themselves into their seats or positions, the musicians cruised out onto the bandstand. 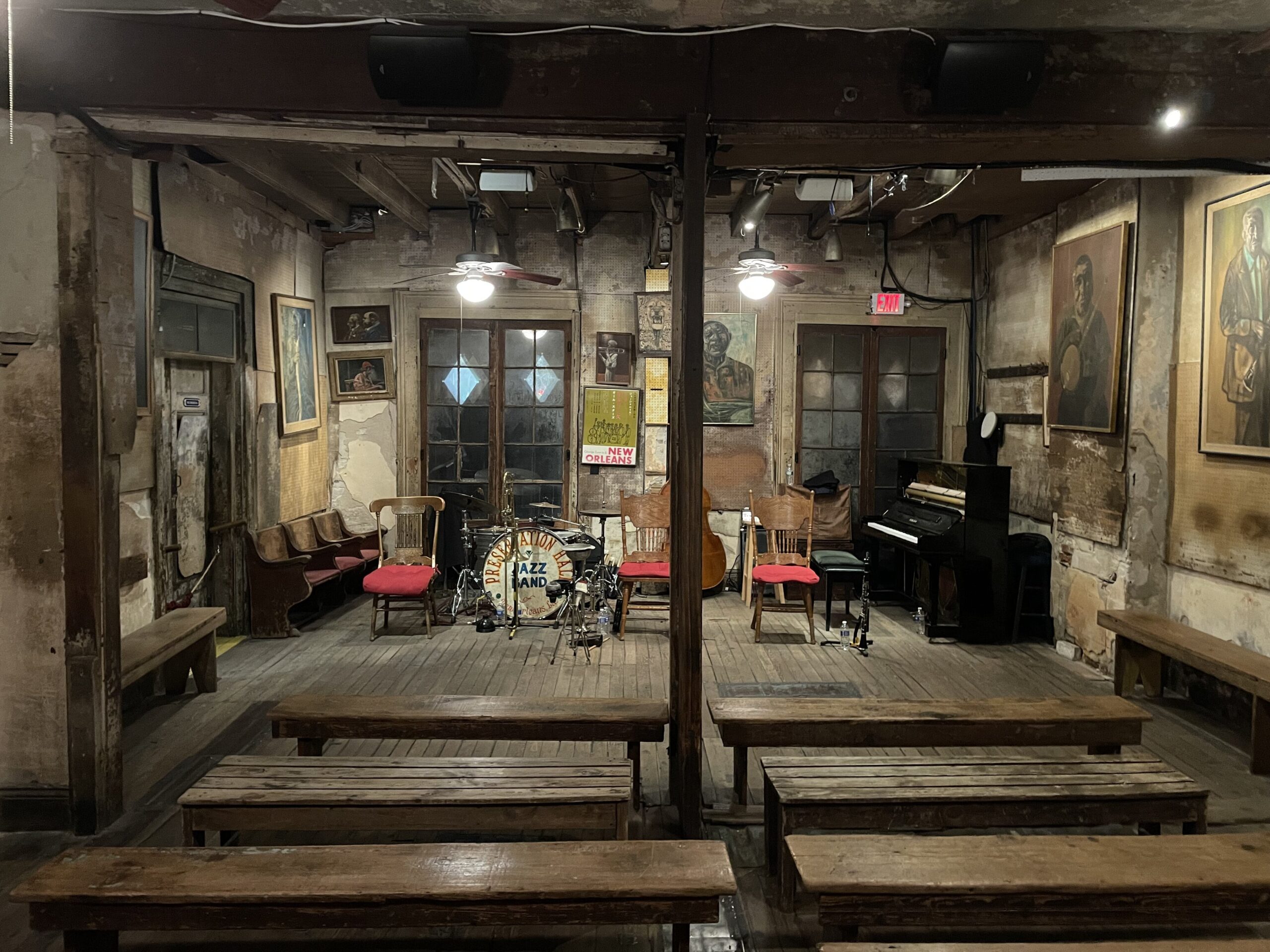 First ones to arrive: the interior and venue of Preservation Hall with its backless benches (Photo by: Ben Patterson)

When the musicians entered, they suddenly pulled taut the loose thread of attention tied to the audiences’ necks like dogs that needed to heel. An entrance that firmly stated, “We’re here, so get ready!” They dragged the thread so tightly that people in the front row leaned in together to get a better view of the stage. Throughout the set, both music and interaction flowed past each other seamlessly which looked unusually staged but witty nonetheless. A group of women shouted out, “Hey! We got a bride over here! Give her something to make her feel sexy!” to which the trumpet player and singer responded, “Let me tell you. I don’t know what this next song actually means, but maybe one of y’all… will be able… to tell me.” The band then began playing a hard, raunchy blues tune titled “You Got the Right Key, but the Wrong Keyhole” by Virginia Liston, which contained too many sexual undertones to count and made one of the girls, who was obviously the bride-to-be, sink into her designer woolen scarf from first-hand embarrassment. I turned over to my friend, and in a sarcastic tone I said, “No, you got the wrong key.” My friend and I bursted out in laughter, much due to the emotional energy that emanated from our shared experience of the tune in both sound and setting. After getting our breath back from laughter’s violence grip, the set continued.

Toes were tapping to the spacious rattles of the snare, heads were bobbing under the star-studded trumpet’s stinging whistle, and eyes stayed shut hoping to catch each ping that reverberated from the piano’s keys. As some watched intently, others occasionally 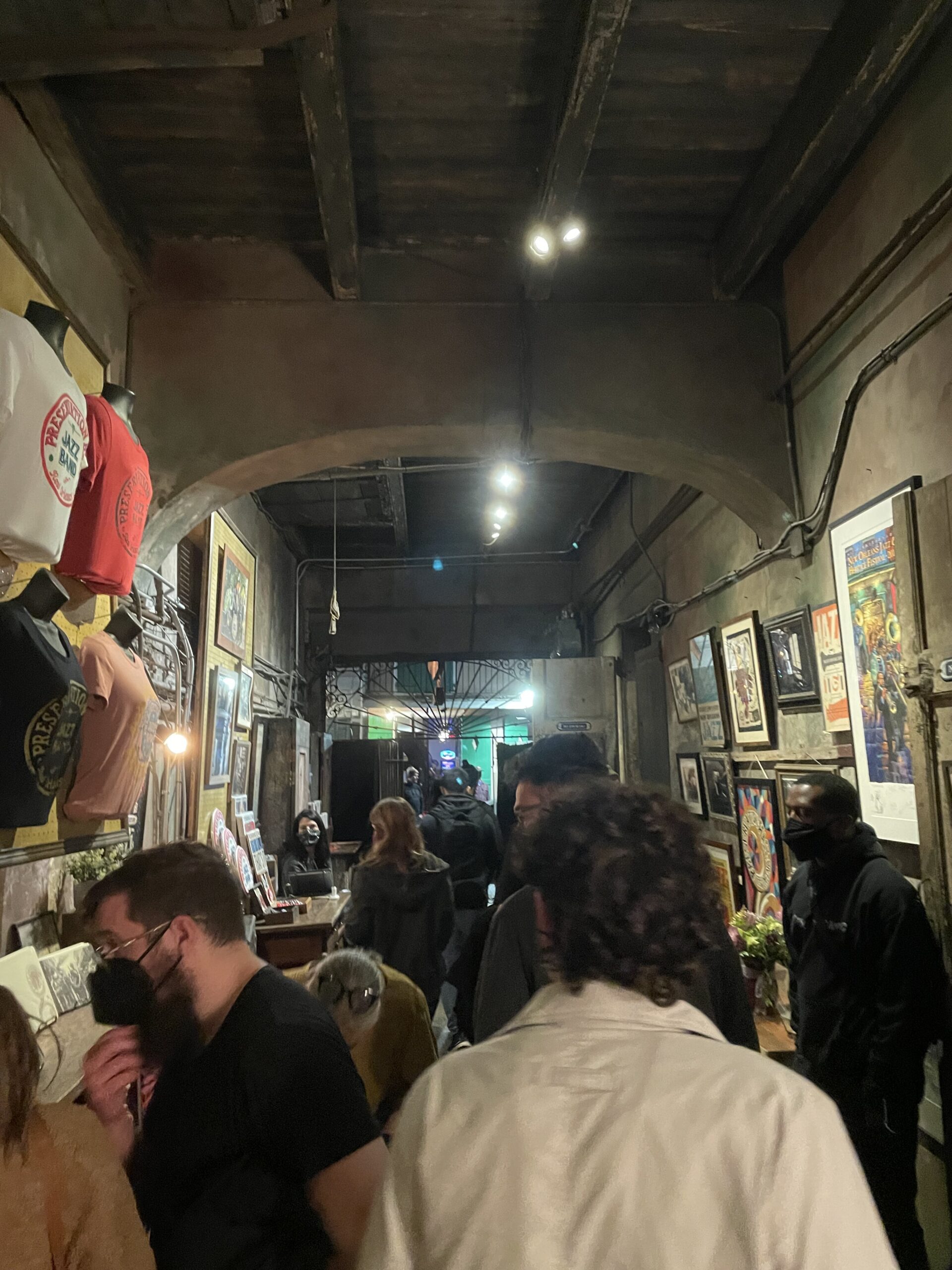 Lining up to exit the venue through Preservation Hall’s hallway (Photo by: Ben Patterson)

slapped their friend on the shoulder in awe of the band’s ability to gesture to each other while maintaining a collective and immaculate sound and rhythm. Combine all these facets of the show, and you get one massive symphonic masterpiece: ear euphoria. As the set went on, we felt like we were falling further and further into a pit oozing with comfort and warmth, being caressed by the presence of a collective experience that emitted such a personal and intimate nature. Then, it was over before we knew it. The set ended so unexpectedly that we at first felt scammed out of our full forty five minute time slot. Like a drug, we just needed a little more of that euphoria or else we weren’t completely satisfied.

There’s no secret formula as to why Preservation Hall could create such an intimate atmosphere with strangers; there was no gargantuan mass of people, overbearing concert noise, or mosh pits that would make introverts uncomfortable. It still maintained a participatory facet which catered to extroverts as well. A beat we can all swing to. Preservation Hall offered a collective experience as well as a personal one. We were packed in an audience of different colors. Some were silver foxes, others were hipsters, a few brought selfie sticks. Even my friend and I were different. His baggy skater-boy jeans coupled with his coconut curled hair clashed with my formal attire and wavy golden mop. Nevertheless, once that short 45 minute set finished, we left smiling at one another in mutual understanding, forgetting how to speak. The music spoke for us, dispelling the need to tire ourselves with drabby adjectives or overused phrases. It created a musical connection.

After the show, I remember thinking about my friend’s skeptical approach to the building before entering, much like how some may approach social gatherings. It was understandable that my friend was fearful of crossing through those metal gates, but when the worn and deteriorated exterior had him second guessing whether or not he should take the next step, he was seduced by the intimacy that lay inside. Once he finally crossed those rusted orange walls of wired bars, he found that the static wasn’t as suffocating as it may have seemed and ultimately became the sticky adhesive that brought us together, much closer than before. 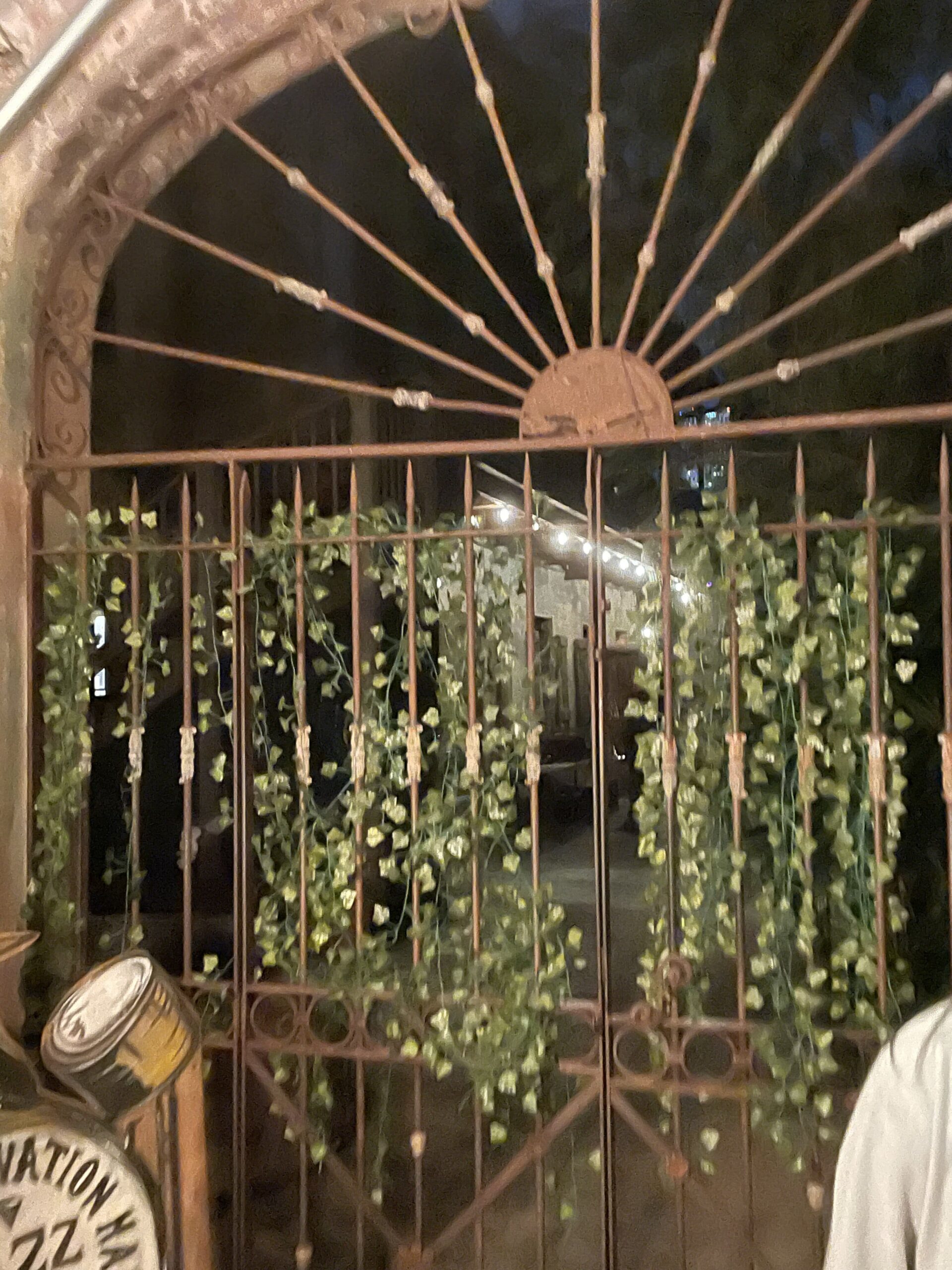 The rusted gates behind the main public venue that lead to the exclusive musicians courtyard wrapped in vines. (Photo by: Ben Patterson)