Each week on their WWNO radio segment, TLP explores issues ranging from healthcare and WhoDat, to tattoos and transportation. Listeners are able to contribute via TLP recording devices at local libraries or via a text messaging service, which then became source material for these programs. This piece aired on November 8, 2013. 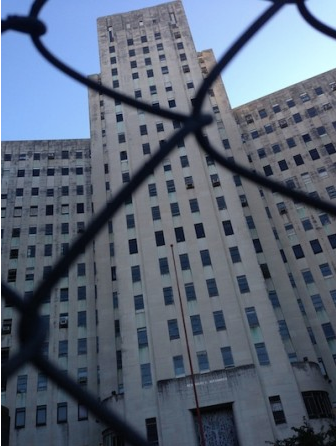 The Charity Hospital building has been vacant since Hurricane Katrina. (Photo by: Steve Myers)

The 1939 Charity Hospital building served the healthcare needs of generations of the city’s poor. However, its basement flooded during hurricane Katrina, and for the past eight years the building has remained vacant.

WWNO’s Listening Post collected audio from its two regular recording locations — at Norman Mayer Library in Gentilly and HeadQuarters Barbershop on Broad Street — to hear what people had to say about the redevelopment of Charity Hospital and the surrounding area. The Listening Post asked people these questions:

Many New Orleans residents are still passionate about reviving Charity for its original purpose, to provide health services:

“I think they should re-use the Charity Hospital building because it was one of the best hospitals of the state, saved a lot of peoples lives, and I think we should all fight to get it back”

“This particular facility should not be torn down. Charity Hospital was a great place for individuals who were sick in the state of Louisiana. It was number one in trauma; I think they should preserve the hospital. It was a training ground for a lot of doctors and nurses.”

“The poorer people of the city cannot afford medical care at most of the hospitals in town. And Charity has been part of the life of this city for over a century or so. It really needs to be reopened, if they could possibly do that. If not, they could use it for other medical purposes.”

But nostalgia doesn’t appear to be winning out in this case. With two new medical facilities being built up the road, the Depression-era art deco building is almost certain to take on a new responsibility. And many understand that:

“As a young girl I was a candy-striper there; I volunteered there one summer, when I was out of school. So it would have a lot of memories for a lot of people, but the thing is, is it worth reviving as far as the cost and everything goes? And with the new building coming up, I think we would have enough health care facilities around. And if its not worth reviving, we can tear that one down and do something else with that space.”

Mayor Landrieu is leading an effort to relocate City Hall and the Civil District Court to the Charity Hospital building, but he needs additional tenants to take on the leftover space… and help pay for renovations. Real estate developer Pres Kabacoff has proposed turning a wing of the building into a neuroscience research facility. Listening Post contributors had some other creative ideas for the powers that be:

“I think they should make it as a mall.”

“We give it to the artists, give them a space, give them a floor. Let them turn it into something beyond what it is. A lot of people would love to do something with that energy.”

“Another grocery store, for the Canal Street location, like a Winn Dixie or a Wal-Mart.”

And what they don’t want:

“There’s too many condos going up in the CBD area, in New Orleans period. They’re constantly building more apartment condos everywhere. I know I would be against turning in to anything like that.”

The fate of the Charity Hospital building is still undecided.

Transportation: Voices from The Listening Post
Audio and Podcasts