What’s your experience with violence in New Orleans: Voices from The Listening Post

Each week on their WWNO radio segment, TLP explores issues ranging from healthcare and WhoDat, to tattoos and transportation. Listeners are able to contribute via TLP recording devices at local libraries or via a text messaging service, which then became source material for these programs. This piece aired on August 14, 2014. 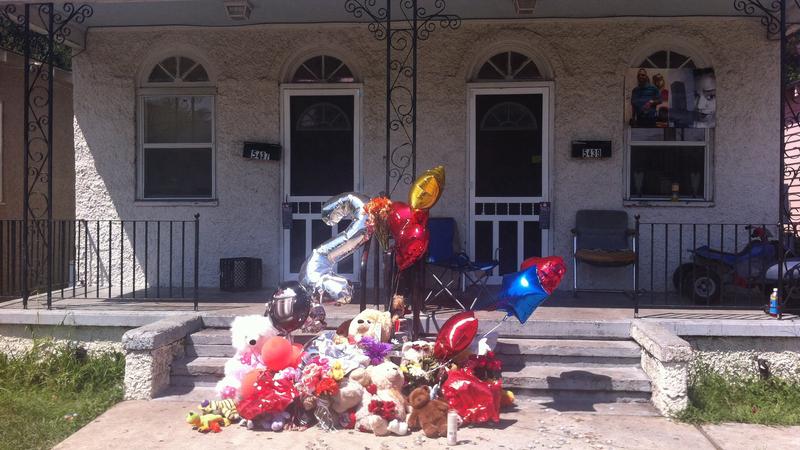 Family members and neighbors of the victims have put up a memorial in front of the house where the shooting took place. (Photo by: Jesse Hardman)

On August 10, 2014, two people were killed and five were injured in a drive-by shooting in the Lower 9th Ward. Two children were severely wounded in the incident.

Listening Post producer and host Jesse Hardman lives a few blocks away from where the shooting occurred in the Holy Cross neighborhood. He set out to talk to some of his neighbors about what happened.

Karen Rogers and her fiancée Troy Blazio live on the 5400 block of Burgundy street in the Lower 9th, two doors away from where the shooting took place. They heard the gunshots that night and hit the floor in their front living room. A few moments later Troy ran outside to see what had happened.

“I keep picturing — this child ran up to me with a hole in his head. I had to put something there, the blood coming out, to stop the blood. A guy gave me his shirt,” Blazio says.  Meanwhile Karen Rogers called 911. “Then I got off the porch and walked over there and I said, ‘Oh my Lord, my God, no, its more than a child. It’s two children, I told them it was three females and a male. I just couldn’t believe the sight I was seeing. It was unreal,” Rodgers says.

Despite the tragedy, Rogers says that her block is usually a friendly place.

“We get along with all of our neighbors,” she says.  “He be outside, they be over in that lot playing horseshoes. Sometimes the neighbor here puts on his music. We barbecue, we play dominoes, we play spades.”

Mayor Landrieu hosted an event at the new $7 million 5th District police facility, which serves the Lower 9th Ward. And while the message was renewal, talk quickly turned to the shooting on Burgundy.

“This is a very very serious problem this city has had for a long time and it is not going to end until all of us pull together,” said Mayor Landrieu.

Police Chief Ronal Serpas asked residents to share any information they had about the shooting, and said he and his department are well aware of ongoing drug activity in the Lower 9th.

Back on Burgundy, Karen Rogers is processing how she feels.

“Nothing happens here, it’s just one stupid person, and I call that person stupid. Honestly, he doesn’t even act like a human being. A human being has compassion. But this person here has none, in order to shoot children like that,” she says.

Rogers and her fiancée Troy Blazio say they are ready to move… but not too far away. The Lower 9th Ward is home, so maybe just a few blocks.

“We had to take off from work yesterday because I couldn’t focus. To see stuff like that, to see that girl lying on the ground. Haven’t been sleeping at all,” Blazio says.

We sent out a text message asking people about their personal experiences with violence in New Orleans. And also what they thing causes it, and what can be done to prevent it. Here are some of the responses we got back:

“My students are being shot at. They are dying. I am heartbroken.”

“I was appalled to hear the listening post comment this morning that we need more police to make New Orleans safer. That’s like saying we need more prisons to fix our criminal justice system. It’s obvious that drugs, especially rapidly increasing heroin use, are behind a lot of the increase. We desperately need more and better mental health services. There are also WAY TOO MANY GUNS available in our community.”

“I believe that if we all, as owners of this city, would act the same towards crime, and not worry about race, we would be more focused on solving some of the crimes and not just pointing fingers at the other race! The black community really needs to stand up and call it what it is. It’s crime within their own community against each other. Drugs!!!! These poor innocent bystanders (children) are paying the price to these modern day monsters! I’m so tired of hearing the excuses about “it’s because I’m black”. What about all the crime all the killings is it still “it’s because I’m black”? No one teaches their child how to work hard for a living anymore they just want the easy way out. They certainly don’t care who they hurt trying to get it!! We all need to have a talk!!!!”

“I and my friends have lost a number of students to violence. A focus on alleviating poverty and it’s side effects (unstable housing, chronic stress, mental health issues, malnutrition) is half the solution. The other half is making police officers accountable community members. Every time a cop runs a red light or speaks disrespectfully to a citizen, it erodes the relationship and makes policing more difficult. Why trust you to protect me from threats if I can’t trust you to follow basic traffic laws?”

“The ongoing violence in New Orleans & around the country highlights a systemic problem—black communities suffer a disproportionate level of violence, receive inadequate criminal justice support and are targeted as arbiters of violence without evidence.”

“Thanking God I have had no personnel experience. I think drugs causes most of the problems. More officers without a doubt and more education in schools. More after school and weekend places for kids and young adults to go.”

“As a police officer, I have seen first hand the results of this violence. There are a variety of problems in my view. One unique to new Orleans is ourlazzes fare attitude. Society cares more about crawfish boils and saints games than the crime problem. When we focus on these issues, we can begin tomake progress. It is a lack of empathy.”

“Put poor NOLAW to work you aren’t killing if you are working and proud of your job 🙂 Have kids understand how good school can be llll them.for kids that are really bad off let’s have a live at school program for them.”

“Was at a show last night at one eyed jacks and saw a ton if blue light on bourbon, turns out someone was stabbed to death. I’m not even going to mention it to my out if town guests.”

“Lack of fundamental education for all AND opportunity to utilize that education. All people need to believe there is a reason to strive for more in life. two tiered (PARENT AND CHILD) education compulsory for public assistance to all parents under 22, but also make the resources to make this realistic, available.”

“What causes violence = lack of education and access to jobs.”

“I have had 2 close, personal friends be victims of personal violence in Nola. One was shot 3 times sitting in his vehicle in front of his house, 2 blocks from my own home. The other person was stabbed multiple times, during daylight hours, outside of the quick-e mart on prytania. Both people survived, luckily. Both incidents occurred in uptown, and both cases are still unsolved as far as I know. Making Nola safer is so hard. I think we need to rehabilitate people and help people, not just incarcerate them. People are released from incarceration with little To no workable skills or support to better themselves upon release. People need help, not more and more jail time.”

“I’ve lived in NOLA all my life and have never been the victim of a crime, or even known anyone personally who was. I think if you avoid drugs and gangs, you’ll be fine.”

“There is evil in this city, inscribed from its birth.”

“We need a WPA job program to guarantee work to every person ages 16-25. The murder rate is a crisis, let’s treat it like one: bold, expansive, sustained.”

“Pretty much everyone I know has been mugged at gunpoint. I’ve had one friend murdered, no suspects. I was attacked by a 19 year-old, no gun, though. He was caught. I testified to put the perpetrator on jail. He got out at age 26, attacked someone else with a gun and was shot dead in that exchange. New Orleans will be somewhat safer with fewer guns, opposing beyond drug-selling. But that is tied into problems with the changing global economy and a lack of jobs in general. Finding opportunities in growing industries and getting young people into training programs *might help. Pretending everyone is college bound is ridiculous.”

“No personal experience, knock on wood. Street lights could help.”

“I’m an ER nurse. I’m at the hospital when many GSWs arrive both dead and alive. I was there last Sunday when the 3 children, the mom And the 33 year old woman came from burgundy and flood. These killings are drug and gun related and the killers and targets are loaded (drugs) when they come in. To avoid traumatogy you must first… Know your drug dealer and second pay your drug dealer! Seriously we have to ban automatic weapons and do routine and random searches and stops We have to ensure gun carriers have lisences. Conduct focus groups among killers to develop methods that work. We need to fly witnesses out of this area to protect them and help them start over. People are not talking because they are scared and have to return to their homes without protection. We need to involve the mothers to be able to get their kids help before they are another casualty.”

“In New Orleans, poor kids attend some of the worst schools in the country and their streets are patrolled by infamously corrupt and incompetent police. People with means send their kids to private school and hire security companies to keep their neighborhoods safe. Most other places in the US would see this as a fundamental breakdown of the social contract.”

“I hope you will continue these texts. I can help you. Desiree”

“Over the last two years, there have been three shootings on the same corner next to where I live, resulting in one death. All three appeared to be crimes of passion, but you never know. A safer New Orleans will require a change in our culture, which will take many generations, but certainly worth the effort.”

So far in 2014 there have been 82 reported murders in New Orleans.