Car-free transportation in the Big Easy is hardly ever care-free. For the New Orleanian without a car,figuring out the best mode of transit from home to to the grocery can feel as challenging as choosing what recipe to make. Amid time-shortages, potholes, frequent showers, and Louisiana heat, choosing the best form of car-less transit can be tricky. This grouping of articles explores and appreciates the different forms of transit in New Orleans, no driver’s license or car necessary.

Some walk. Some take the street car. Some take the bus. Some bike. Some drive. New Orleanians share first-hand accounts as to how they commute, their biggest challenges while getting around the city, and their favorite stories from previous travels through New Orleans in this podcast originally published on NolaVie on February 6, 2020. 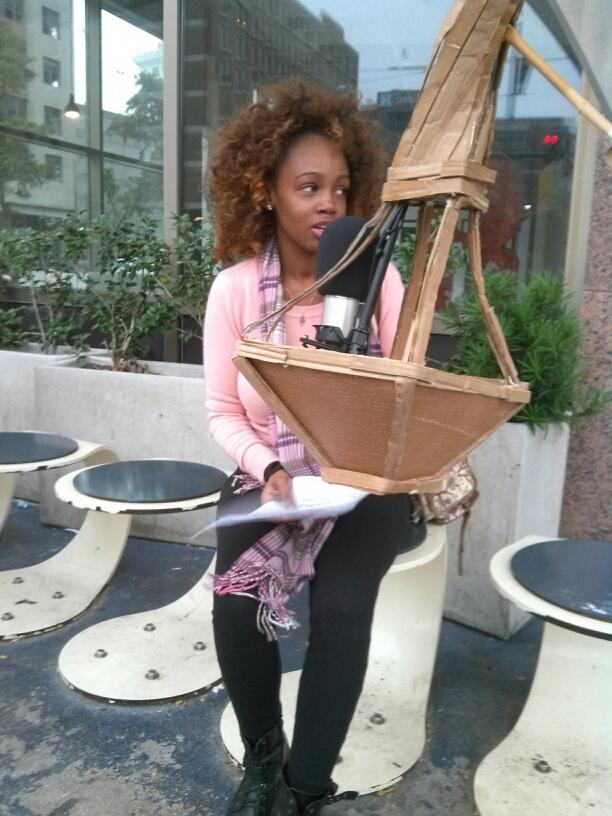 The Listening Post visited a bus stop in the CBD to hear how people get around town. (Photo by: WWNO/Listening Post)

Getting around New Orleans can be tricky. Whether they have a car, ride a bike, or use public transportation, Crescent City commuters face unique obstacles — from potholes to parades.

WWNO’s Listening Post collected audio from its recording locations at Norman Mayer Library in Gentilly and HeadQuarters Barbershop on Broad Street, as well as the Mirliton festival in the Bywater and the bus stop at the corner of Tulane and Loyola. The Listening Post asked people these questions:

“I walk a little bit and I drive mostly. I’m 72 years old and got pretty bad lower back issues. I’m hoping to get a nice three-wheel bicycle.”

“What’s the hardest part about your commute? Potholes!”

“The hardest part about my commute is schlepping kids from one end of the city to the other because my neighborhood school two blocks away is not great. It would be really nice if our kids could go to school in the community in which they live versus hauling them from one end of town to the other.”

“I catch the bus. I love catching the bus!”

“I take streetcars, buses and sometimes I ride my bike. My favorite story of traveling in New Orleans is one time I walked all the way from the Lower 9th Ward on the other side of the canal to Canal Street to go to the aquarium”

“The hardest part about my commute is that I constantly get pulled over by the police. I got pulled over on the way here. I didn’t run no stop signs, I didn’t commit no traffic crimes, but they just wanted to pull me over.”

“No matter where you go in New Orleans, you will always end up back at Canal Street. You can catch a bus anywhere down here, and it’s affordable. You put $3 on a card and all day you can go wherever your heart desires. And I like that. It’s just the waiting part that’s so long.”

“I mostly walk and bike around New Orleans. And sometimes my roommates and friends drive me in their old Buick. The hardest part of my commute sometimes is being afraid of street harassment, being a physically queer person.”

“I’ve had the pleasure through my 50-something years in this city to get around various ways. Any means necessary to go to the grocery store. Since I’m single at this point, I usually go to the store four or five times a week, but I only get two or three things, so I can walk or I can travel by any means. Anytime you travel in New Orleans, it’s a favorite story.”

Each week on their WWNO radio segment, TLP explores issues ranging from healthcare and WhoDat, to tattoos and transportation. Listeners are able to contribute via TLP recording devices at local libraries or via a text messaging service, which then became source material for these programs. This piece aired on December 5, 2013.