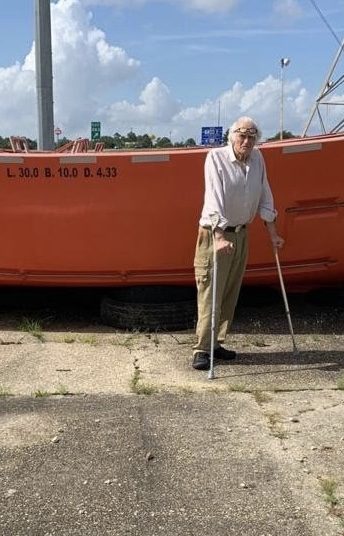 The world of art exists in a realm that is subjective, free, and abstract. This, however, does not mean the art world – and the artists that exists within it – have escaped critique, challenge, and controversy. Artists are constantly rejected and ridiculed because their artwork does not fit within society’s expectations of what art is. This question of what constitutes art has haunted the artistic community for hundreds of years and is still asked and debated today. This is the question that Robert Tannen approached with his display of Lifeboat.

Tannen displayed Lifeboat at Hancock Whitney’s White Linen Night on August 3, 2019. Lifeboat, as the title implies, is a 30-foot bright orange emergency vessel that Tannen transported to the Warehouse District to be viewed by art spectators. While this object may not normally be considered art, Tannen tried to challenge this notion with his piece. This concept of questioning the qualifications for art, however, are not unique to Tannen. One of the first artists to attack this controversial question was Marcel Duchamp, a French-American artist.

Duchamp’s works often created massive disruptions in the artistic community. The first of such works was Fountain in 1917. Fountain is a sculpture (or readymade) constructed from a bathroom urinal that has been turned upside down, placed on a pedestal, and signed “R. Mutt 1917.”

Duchamp’s labeling of this commonplace object as a piece that deserved artistic merit was both mocked and frowned upon (1). The artistic world of the early 1900s could not understand how a bathroom urinal – reserved for one of the most private and personal human activities – could be considered a “sculpture” (or art for that matter). Not only was a urinal created for a very intended purpose, but it was extraordinarily ordinary. Any individual with the means to do so could purchase the same exact mass-produced urinal and put it on display as Duchamp has. While these critiques are what led many to disregard Duchamp’s work, it ultimately portrayed exactly what Duchamp was attempting to achieve. Duchamp used mechanisms of manipulation and confrontation on Fountain to challenge the public’s view – which are the same mechanisms that Tannen mirrored in his creation of Lifeboat.

Duchamp in Fountain successfully blurred the lines between art and the mundane. Prior to his creation, the art world had seldom pondered what true art was. Individuals remained under the assumption that great artists create great works. And those great works would be displayed in spaces that were deemed to showcase great art – museums, galleries, etc. Fountain, thus, made individuals question how great art is created. Marcel Duchamp was able to remove the mundane urinal from its original environment and manipulate it – calling it art. It is this removal from an object’s original context and the manipulation that transform the mundane into art. Duchamp’s simple actions of turning the urinal upside down, placing it on a pedestal, and then casting an authorial signature upon the piece were the intentional alterations that made individual’s question its intention. This manipulation completely changed the object’s original function. The piece could no longer serve its original purpose and now had to be reconsidered in its new state. It is this manipulation of the commonplace and everyday that makes Duchamp’s work so powerful and reactionary.

Tannen’s use of manipulation in Lifeboat is even more minute than that of Duchamp’s. The only physical alteration that Tannen made to the life vessel was painting on the side of the boat in black, capital letters, “NOLA.” While this change was small, it is a defining aspect of turning the boat into art. The inclusion of the painted “NOLA” is what grants the piece true meaning and new purpose. Just as Duchamp used the rotation and signing of the urinal to remove the urinal’s function and transition the object to sculpture, Tannen attempts to achieve a similar goal. The painted alteration is not only a plea to be considered art, but to draw attention to a growing societal issue: Climate Change.

Specifically, Tannen is concerned with the disappearing coastlands of New Orleans. Louisiana is currently losing coastal lands at unprecedented rates. From 1932 to 2010, Louisiana has experienced a net loss of -1,883 square miles of land, losing 25% of its 1932 land mass (2). Tannen’s addition of “NOLA” painted on the side of the vessel is intended to direct conversations about this environmental crisis to our home. By using a life vessel, which carries connotations of maritime crisis and survival, in conjunction with the painted “NOLA,” Tannen is drawing crucial connections between Lifeboat and the environmental issues at hand. These issues are ever-present and Tannen’s piece functions to address them.

The other key aspect to Duchamp’s work and method is confrontation. While the manipulation of the mundane is important for reassigning function to an object, where that object is placed determines how it will be defined and received. In Duchamp’s case it was his assignment of the urinal on a pedestal in an art gallery that finally led individuals to accept the piece as art. Had Duchamp placed his urinal in a different environment, the urinal would have received a different meaning. It was the context of the art gallery that allowed Duchamp to force audiences to confront the piece and truly question what art is – allowing him to accomplish his goal. It is this strategy of confrontation and manipulation that force individuals to think about concepts that are often overlooked or ignored.

Tannen’s confrontation took the form of removing the boat from the prop shop parking lot from which it was purchased and placing it in a parking lot on the 600 Julia Street block of the Warehouse District, where Hancock Whitney’s White Linen Night occurs. By placing the readymade in the middle of an art exhibition, Tannen is demanding that the piece be considered art. Tannen when asked about the readymade’s artistic value, stated that “It’s art because I’m taking it out of context…This is an illustration of a problem. It’s no longer a lifeboat, and not just because I bought it.” This tactic is the same as Duchamp’s placement of the urinal in the art gallery. However, Tannen’s function also goes a step further. He is not only demanding that spectators view and ponder the art piece – as it is much too large to ignore – but also the intentions behind it. He is forcing spectators to understand and confront the issues of coastal land loss. His deliberate choice of situating the readymade in a parking lot in the middle of an art exhibition serves a purpose greater than qualifying the object as a piece of art. By placing the boat onto dry land, he is foreshadowing – while possibly in an exaggerated manner – that this parking lot could quickly become consumed by water. This piece is attempting to incite environmental activism that will help combat this growing problem. 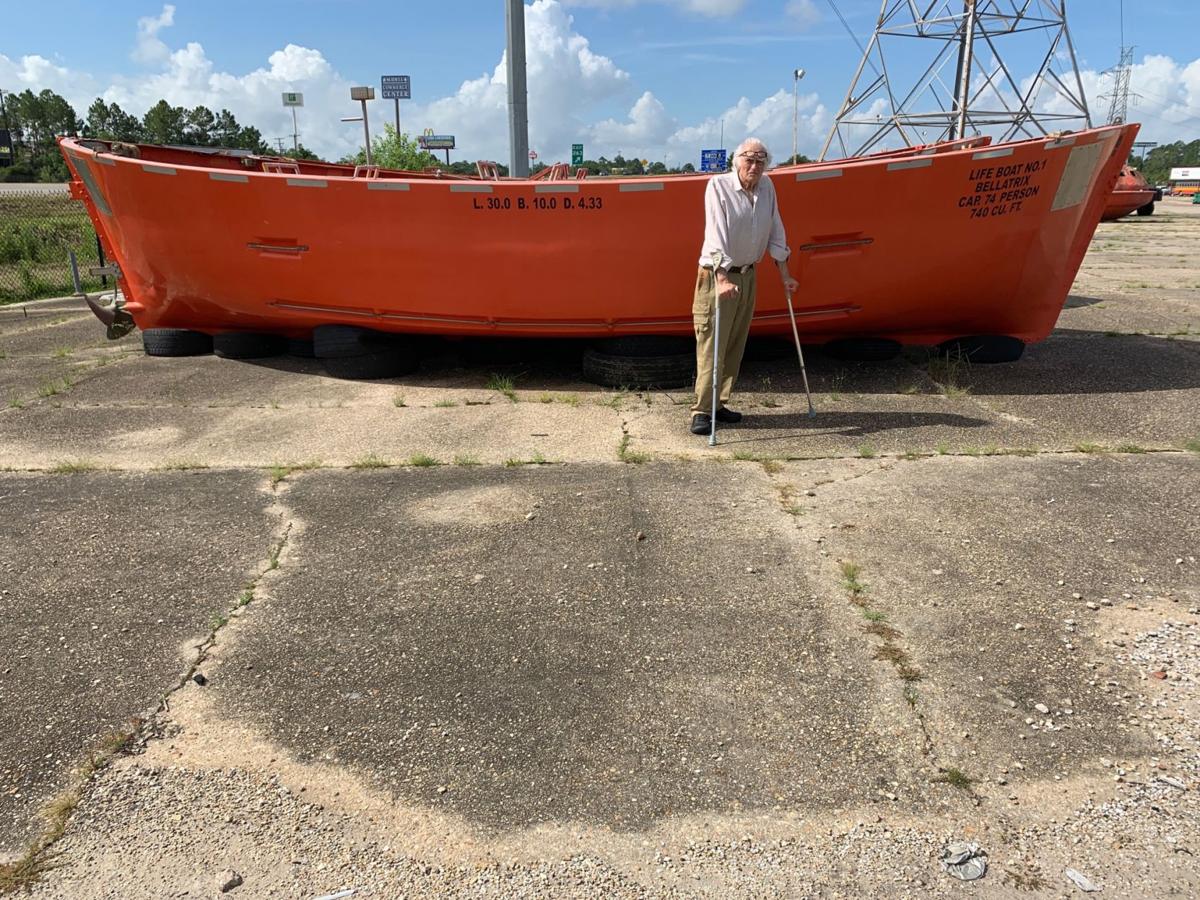 Photo of Robert Tannen with his lifeboat. (Photo Credit

Through the sheer size of Tannen’s readymade, Tannen was able to make a big statement. The confusion or deliberation over whether Lifeboat should be considered art, forces the audience to focus long enough on the piece to truly start to understand Tannen’s purpose. As Tannen grew up in a small gated community on Coney Island, where the ocean played a large part in his childhood and adolescent years, this issue is of extreme importance to him. His readymade serves as a bridge to facilitate conversation about our planet’s survival (specifically in New Orleans), which is only made possible through the use of manipulation and confrontation.

Without the use of Duchamp’s strategies of manipulation and confrontation upon his ready-made, Tannen would not have been able to successfully label his 30-foot life vessel as a work of art. However, unlike Duchamp, he was not just questioning the definition of art. He, instead, used art as a medium to make society address serious environmental issues that are affecting us right here, right now. So whether or not you may think this piece should be considered art, this modern-day Duchamp still accomplished his goal of sparking conversation and questions about the implications of climate change.