Footprints: An unexpected leap into the psychedelic with Box of Artificial Flowers #6

As I stepped out of my car and walked towards the crowded, hectic corner of Poydras St. and Loyola Ave., I approached what resembled a fever dream. A giant sculpture, competing in size with the surrounding neutral ground foliage and even coming up only slightly short of the nearby office buildings, stood tall and proud for all onlookers to see. Painted with vibrant and varying shades of yellow, blue, green, orange, red and purple, and contrasting patterns of stripes, crisscrosses, and polka dots, the “Box of Artificial Flowers #6” serves as a focal point of this busy city intersection, only otherwise noticeable because of its proximity to New Orleans City Hall (3). Located so close to City Hall’s “six decades old and run down” main office, the sculpture stands in stark contrast to a government building in need of a serious facelift (1). The City Hall building has become overgrown with time and is only getting worse for the bureaucrats forced to work within its walls. The city has, thus, been forced to spend millions of dollars each year to relocate government workers out of the ramshackle space at the corner of Poydras and Loyola (1). 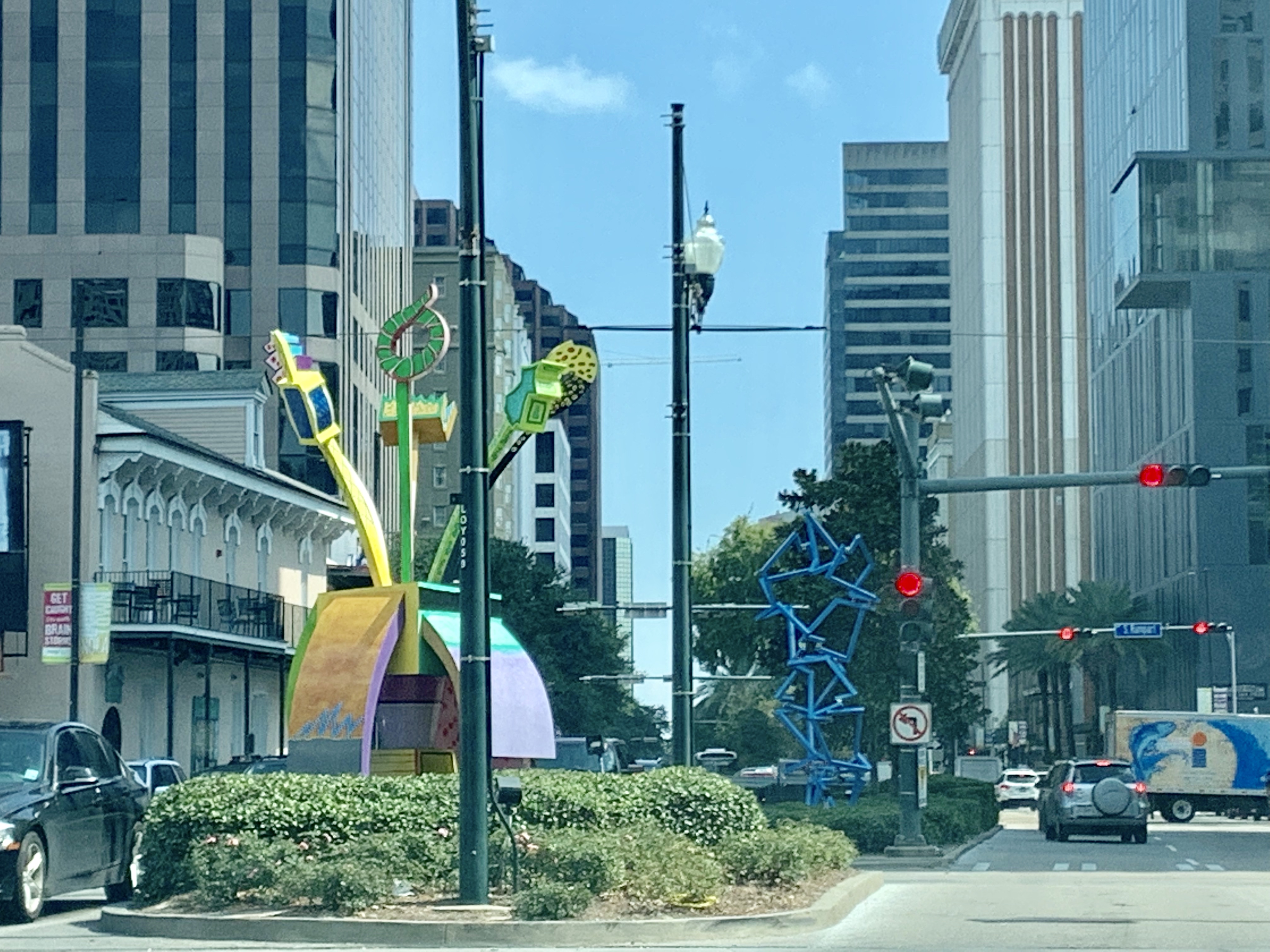 In contrast, the bright hues and avant-garde shapes reminiscent of musical notes overflowing like a waterfall that make up the “Box of Artificial Flowers #6” cause the sculpture to stand out in comparison to the bleak, overworked New Orleans city skyline. The flowers take on an unnatural quality, evocative of a childhood drawing or a comic book page come to life. With cars racing by, pedestrians walking, and people talking on phones, this street corner is nothing but ordinary. However, by blending the artificial with the real grit of the city, a hectic metropolis is forced to confront spectacle, as spectacle otherwise would not exist in such a space. Blending both the fake and the real, the “Box of Artificial Flowers #6” transports the viewer to a psychedelic wonderland where whimsy and the city can mix into one and blossom into an intrepid attempt at an unlikely love story.

The “Box of Artificial Flowers #6”, originally designed by late artist Ida Rittenberg Kohlmeyer. Originally, the sculpture was intended to be displayed in front of the New Orleans Museum of Art (NOMA). However, over 35 years ago, the “Box of Artificial Flowers #6” was purchased by a private collector in Chicago, only to be reacquired by the Helis Foundation in 2018 (3). Today, the sculpture is a staple of New Orleans’ Central Business District, bringing light and whimsy to an otherwise dull city street intersection.

While ordinary in theory, the placement of this sculpture is a statement beyond what originally meets the eye. Even though the manufactured flowers make up the majority of this piece, the message the artwork sends is much more intricate. The “Box of Artificial Flowers #6” spreads a beacon of light—the flowers are whimsical and in full bloom. There is an element of hopefulness to the lifecycle of the natural world. Flowers and the like all remind us to be childish and appreciate the eccentricity of life. Viewers are encouraged to peer out their banal office windows and see the brighter, more uplifting part of their days. The stems, long and sloping, are painted intricately with colors changing from brown to white to blue to green as the eye gazes from tip to stem, expressing the creativity that most cannot in their mundane, everyday lives. Each individual flower serves as a unique divergence from one another. The design of every blossom stands in contrast to one another: one is black covered in red and green polka dots, while another is yellow, blue, and looks more like a candlestick than a flower at all. Consequently, the flowers are simultaneously cohesive. All arranged precisely within the boxy vase that serves as the sculpture’s base, the flowers work as a unified bouquet against the backdrop of an unkempt metropolis hobbling on its last legs.

Even more, the flowers keep the “worker bee” alive and inspired. They remind the hardworking proletariat to embrace their childish side and appreciate the extraordinary. The same way that psychedelic medical intervention forces its patients to experiment with an out of body experience, the “Box of Artificial Box of Flowers #6” encourages the average onlooker to transcend habituation and embrace “abreaction, catharsis, understanding, acceptance, and forgiveness” (4). It forces the viewer, who otherwise is stuck in the daily rut of work without play, to become one with his or her surroundings. It evokes the outlandish, the unusual, bringing out something almost other-worldly to the bleak, politically charged city intersection.

Just like the reintroduction of psychedelic drug experimentation in psychotherapy, the “Box of Artificial Flowers #6” provides a rejuvenation to New Orleans’s otherwise uninspiring business center. The way in which psychedelic drugs are able to play with an individual’s emotions is paralleled to the potentially intended reaction from “Box of Artificial Flowers #6”. The feeling of being born (or re-born), as happens with patients experiencing psychedelic rehabilitation is something that the city gravely needed (2). A rebirth from psychedelic intervention helps patients not only to solve physical and mental illness, but also to “facilitate creative problem solving” (2).  New Orleans was asking for artist G. Paul Lucas (student of the creator, now late Kohlmeyer) to restore and refresh not only the sculpture, but also the city.

For New Orleans, a revival is on the cusp, but not as we normally imagine it; we must examine what New Orleans really needs, and that might just be something a little bit off the beaten path. For example, the healing effects of psychedelic, alternative medicine enhance the overall “aesthetic value” of one’s creativity (2). By reevaluating the origins of New Orleans as a mecca for creative experimentation and avant-garde expression, the “Box of Artificial Flowers #6” is able to encourage the reemergence of eccentricity and whimsy to the city. Thus, this message can only be so powerful in a scenario as dreary as a city intersection on the brink of death (one of many which require more attention than most other bright and burgeoning cities). The contrast between the heavy, sluggish Central Business District and the “Box of Artificial Flowers #6” is a reminder to intertwine the outlandish and the need for the strange, but beautiful, in our lives. This sculpture is a form of complete healing, indicating the usefulness of eccentricity to redirect problems in our lives towards something positive (4).

The flowers themselves indicate growth and rediscovery, which are always on the horizon in the environmental cycle of life. More specifically, the death of a single rose is necessary in order to reignite the flame of a once forgotten meadow—one full of daisies, tulips, peonies, gardenias, sunflowers, and roses (all of which are indicative of a prosperous and positive melting pot). The “Box of Artificial Flowers #6” is also unique in that it doesn’t prescribe itself to one particular norm. The design is outlandish, painting flowers in obscure ways, to look less like nature and more like a psychedelic fever dream.

At first glance, the artwork is unconventional and out of place. It is an artificial representation of something earthy and pure. But, the flowers are reinvented: they are capped with circles, crowns, and torches, all of which are contained within a vase-like box that bleeds colors of orange, yellow, green, and blue together. Ultimately, however, the growth and change the “Box of Artificial Flowers #6” represents is much larger than the sculpture itself—it is a signifier of rebirth and redesign from old habits into new murky waters. The change brought about by these flowers is not only inevitable, but it is needed, as it connects the viewer to a primal, more underrepresented part of the human psyche.

Norah Lovell: A visual translator
Artists
We use cookies to ensure that we give you the best experience on our website. If you continue to use this site we will assume that you are happy with it.Ok