Footprints: The Tourist sculpture comes and goes but New Orleans is forever 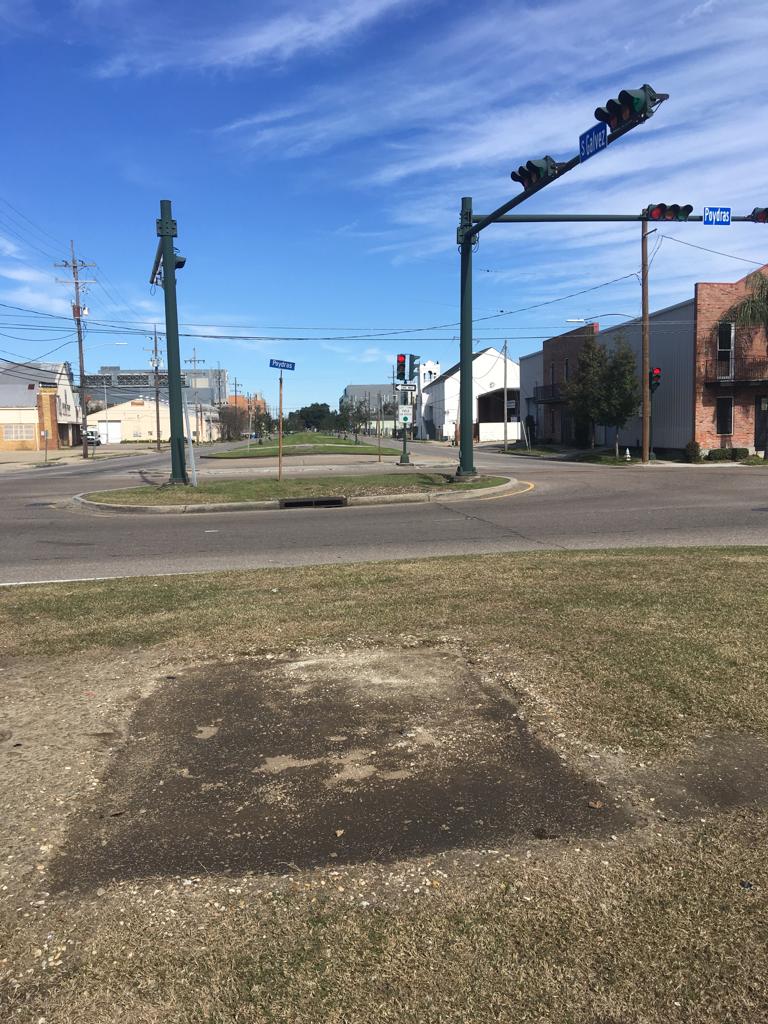 Where The Tourist once was. (Photo by: Ishanya Narang)

New Orleans is considered to be one of the most attractive tourist spots in the United States. U.S. News ranked the city #13 on the “25 Best Places to Visit in the USA.” With the mix of Caribbean and Senegalese architecture as well as artists like Frank Relle and Big Freedia, New Orleans’ cultural horizon offers a place to explore, question, and let loose — no matter what a person’s age. In 2017, the New Orleans Convention and Visitors Bureau estimated the total number of visitors at approximately 17 million, generating over $8 billion for the city in revenue. Tourism remains one of the largest employment industries for the city, offering jobs to around 73,237 New Orleans residents.

In the same vein, the summer of 2016 saw the arrival of a unique guest to the Big Easy. As part of an art series titled, “Avian Avatars” by artist collective Myth Makers, a sculpture of a Victoria crowned pigeon was installed in June. The sculpture, called The Tourist was installed at the corner of Poydras and S Galvez Street.

Constructed entirely out of wire ties, saplings, and other found objects, the twenty-foot tall bird is accompanied by four other pieces by the same curators. The New Orleans exhibition of Donna Dodson’s and Andy Moerleins’ bird sculptures is an expansion of the Poydras Corridor Sculpture Exhibition put up by The Helis Foundation. “New Orleans is an iconic North American city with wide variety of cultural roots nestled in a vulnerable environment,” Dodson and Moerlein say. “Known as a trendsetting art vortex, the city’s rich blend of peoples, music and foods create a gumbo of possibilities” (2).

Through the sculpture series, the curators intend to convey a message of transformation (1). Specifically, The Tourist embodies the goal of highlighting how “visitors drawn to the vibrant city shape culture with their impulsive consumer behavior,” as a legend surrounding the sculpture states (1). In doing so, making the bird a perfect symbol of a New Orleans tourist — a visitor who engages with the culture, grandeur and expansive scope of the city while also creating revenue for its people. From eating at local restaurants to buying Mardi Gras-themed clothing at a boutique in the French Quarter, the tourists that New Orleans invites generate a plethora of monetary opportunities for the natives of the city.

The Myth Makers explain that, “Like many who are visiting New Orleans for the first time, the lively bird wants to experience it all” (3). The tall pigeon figure was installed almost strategically in the vicinity of the Mercedes-Benz Superdome, one of the most prominent tourist destinations of the city. This juxtaposition of the Superdome — which was built over 40 years ago and has come to represent the city’s cultural connection to American football — with the fleeting existence of The Tourist, defines the true essence of what New Orleans represents. The Superdome stands as a symbol of the permanence and resilience of the people of the city and creates a wonderful contrast with The Tourist, that is not only made of perishable materials but also, as I was soon to find out, would be a short-lived guest.

As a temporary resident of the city myself, I was eager to see The Tourist in the flesh; to experience its embodiment of the energy that tourists bring to the city when they visit. So on a beautiful Saturday winter afternoon in January, I set out on my journey to find the sculpture and experience it myself. I took an Uber straight to Poydras Street. After a 15-minute drive, I was ready to see, and touch and bask in the glory of the pigeon. I was finally going to be able to understand the scale and magnificence of the sculpture. But when I arrived at my destination, I was left disappointed. Where I expected to see the bird, a little over three times as tall as myself, was now a 4-inch deep dent. There had to have been something wrong. The sculpture couldn’t have just been gone, could it? Maybe I was not in the right place. I looked up the address on my phone one more time. Sadly I was exactly where I supposed to be. I could see the Superdome to my right. On an average day, that makes me really excited. But not then. I couldn’t stop thinking about the sculpture I was there to see. I stared at the big empty rectangular dent that the bird had left and then tilted my gaze about 20 feet upwards imagining where and how tall the sculpture would’ve been. That is all I could do. I could only imagine how great The Tourist would’ve been. My quest to admire the sculpture in the flesh was left unfulfilled. I felt like an explorer whose great hopes of finding something truly amazing were shattered by the impermanent nature of art. 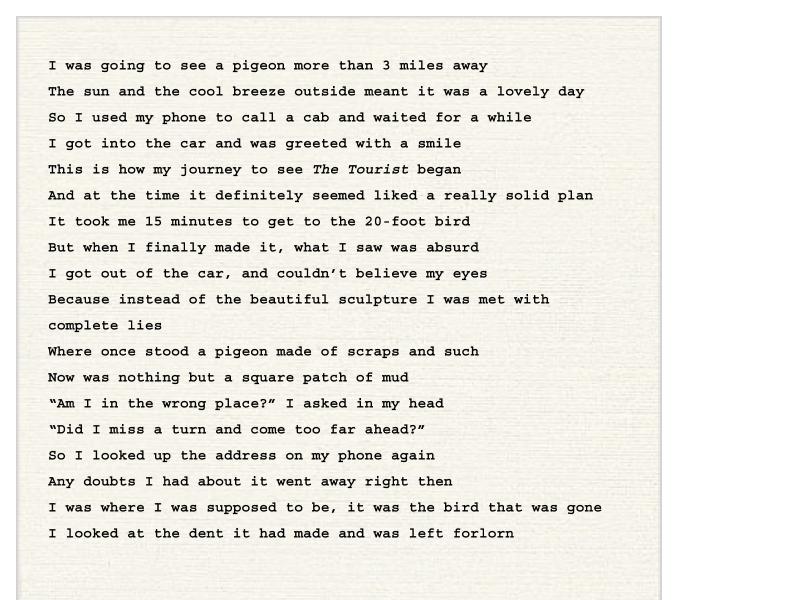 Disheartened, I requested a ride back to my home using the app on my phone. I got into the car and immediately started telling my driver the story of the missing piece of art. We talked about my disappointing experience for the entire drive and one thing that he said during our 15-minute long conversation really prompted me to think. He said, “I definitely remember something being here, but honestly I couldn’t tell you what it was even if I tried.” The sculpture had been in the same spot for over a year, and yet there were so many people, just like my Uber driver, who had no memory of it ever existing. This made me wonder about the people who visit New Orleans every year. Although they remember the city, and leave their own marks around the French Quarter, eventually their memory of the city fades away, and their imprints on the muddy parts of the sidewalks around town are washed off by a heavy unforeseen New Orleans downpour.

Just as The Tourist had made its quiet exit from the city, so do millions of tourists every year. They come, experience, give to and take from New Orleans, and then leave (5). This is what makes the Big Easy one of the greatest cities in the world. The exchange of ideas, the coming together of people from different places, and the sharing of experiences. An amalgamation of thoughts, opinions and cultures that eventually all disappear but leave a mark, if you look close enough.