Footprints: Vandalizing vandalism and the measures to protect Banksy 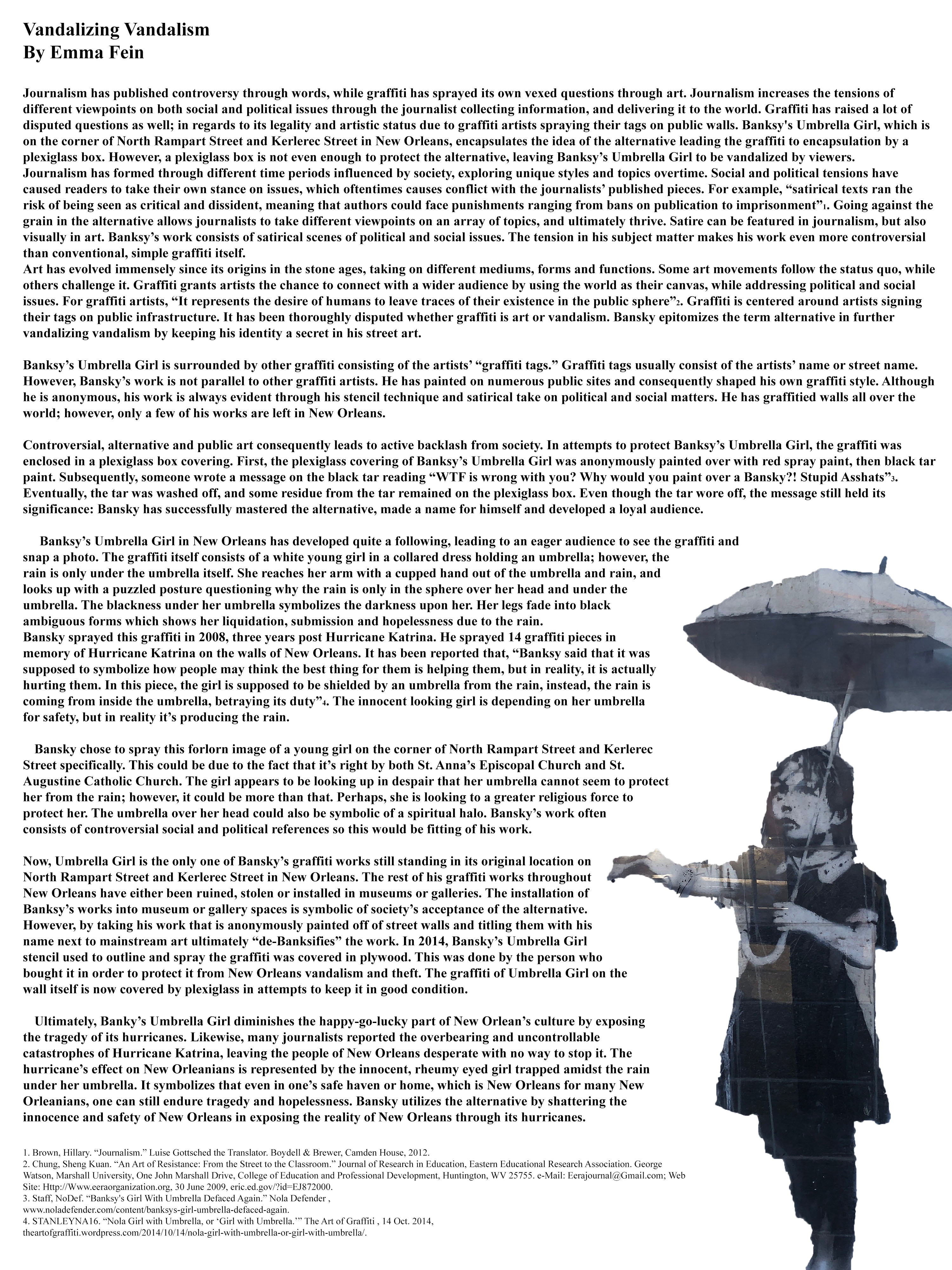 Journalism has published controversy through words, while graffiti has sprayed its own vexed questions through art. Journalism increases the tensions of different viewpoints on both social and political issues through the journalist collecting information, and delivering it to the world. Graffiti has raised a lot of disputed questions as well; in regards to its legality and artistic status due to graffiti artists spraying their tags on public walls. Banksy’s Umbrella Girl, which is on the corner of North Rampart Street and Kerlerec Street in New Orleans, encapsulates the idea of the alternative leading the graffiti to encapsulation by a plexiglass box. However, a plexiglass box is not even enough to protect the alternative, leaving Banksy’s Umbrella Girl to be vandalized by viewers.

Journalism has formed through different time periods influenced by society, exploring unique styles and topics overtime. Social and political tensions have caused readers to take their own stance on issues, which oftentimes causes conflict with the journalists’ published pieces. For example, “satirical texts ran the risk of being seen as critical and dissident, meaning that authors could face punishments ranging from bans on publication to imprisonment”1. Going against the grain in the alternative allows journalists to take different viewpoints on an array of topics, and ultimately thrive. Satire can be featured in journalism, but also visually in art. Banksy’s work consists of satirical scenes of political and social issues. The tension in his subject matter makes his work even more controversial than conventional, simple graffiti itself.

Art has evolved immensely since its origins in the stone ages, taking on different mediums, forms and functions. Some art movements follow the status quo, while others challenge it. Graffiti grants artists the chance to connect with a wider audience by using the world as their canvas, while addressing political and social issues. For graffiti artists, “It represents the desire of humans to leave traces of their existence in the public sphere”2. Graffiti is centered around artists signing their tags on public infrastructure. It has been thoroughly disputed whether graffiti is art or vandalism. Bansky epitomizes the term alternative in further vandalizing vandalism by keeping his identity a secret in his street art.

Banksy’s Umbrella Girl is surrounded by other graffiti consisting of the artists’ “graffiti tags.” Graffiti tags usually consist of the artists’ name or street name. However, Bansky’s work is not parallel to other graffiti artists. He has painted on numerous public sites and consequently shaped his own graffiti style. Although he is anonymous, his work is always evident through his stencil technique and satirical take on political and social matters. He has graffitied walls all over the world; however, only a few of his works are left in New Orleans.

Controversial, alternative and public art consequently leads to active backlash from society. In attempts to protect Banksy’s Umbrella Girl, the graffiti was enclosed in a plexiglass box covering. First, the plexiglass covering of Banksy’s Umbrella Girl was anonymously painted over with red spray paint, then black tar paint. Subsequently, someone wrote a message on the black tar reading “WTF is wrong with you? Why would you paint over a Bansky?! Stupid Asshats”3. Eventually, the tar was washed off, and some residue from the tar remained on the plexiglass box. Even though the tar wore off, the message still held its significance: Bansky has successfully mastered the alternative, made a name for himself and developed a loyal audience.

Banksy’s Umbrella Girl in New Orleans has developed quite a following, leading to an eager audience to see the graffiti and snap a photo. The graffiti itself consists of a white young girl in a collared dress holding an umbrella; however, the rain is only under the umbrella itself. She reaches her arm with a cupped hand out of the umbrella and rain, and looks up with a puzzled posture questioning why the rain is only in the sphere over her head and under the umbrella. The blackness under her umbrella symbolizes the darkness upon her. Her legs fade into black ambiguous forms which shows her liquidation, submission and hopelessness due to the rain.

Bansky sprayed this graffiti in 2008, three years post Hurricane Katrina. He sprayed 14 graffiti pieces in memory of Hurricane Katrina on the walls of New Orleans. It has been reported that, “Banksy said that it was supposed to symbolize how people may think the best thing for them is helping them, but in reality, it is actually hurting them. In this piece, the girl is supposed to be shielded by an umbrella from the rain, instead, the rain is coming from inside the umbrella, betraying its duty”4. The innocent looking girl is depending on her umbrella for safety, but in reality it’s producing the rain.

Bansky chose to spray this forlorn image of a young girl on the corner of North Rampart Street and Kerlerec Street specifically. This could be due to the fact that it’s right by both St. Anna’s Episcopal Church and St. Augustine Catholic Church. The girl appears to be looking up in despair that her umbrella cannot seem to protect her from the rain; however, it could be more than that. Perhaps, she is looking to a greater religious force to protect her. The umbrella over her head could also be symbolic of a spiritual halo. Bansky’s work often consists of controversial social and political references so this would be fitting of his work.

Now, Umbrella Girl is the only one of Bansky’s graffiti works still standing in its original location on North Rampart Street and Kerlerec Street in New Orleans. The rest of his graffiti works throughout New Orleans have either been ruined, stolen or installed in museums or galleries. The installation of Banksy’s works into museum or gallery spaces is symbolic of society’s acceptance of the alternative. However, by taking his work that is anonymously painted off of street walls and titling them with his name next to mainstream art ultimately “de-Banksifies” the work. In 2014, Bansky’s Umbrella Girl stencil used to outline and spray the graffiti was covered in plywood. This was done by the person who bought it in order to protect it from New Orleans vandalism and theft. The graffiti of Umbrella Girl on the wall itself is now covered by plexiglass in attempts to keep it in good condition.