History of the warehouse at Chartres and Piety Stree: Gone but not forgotten 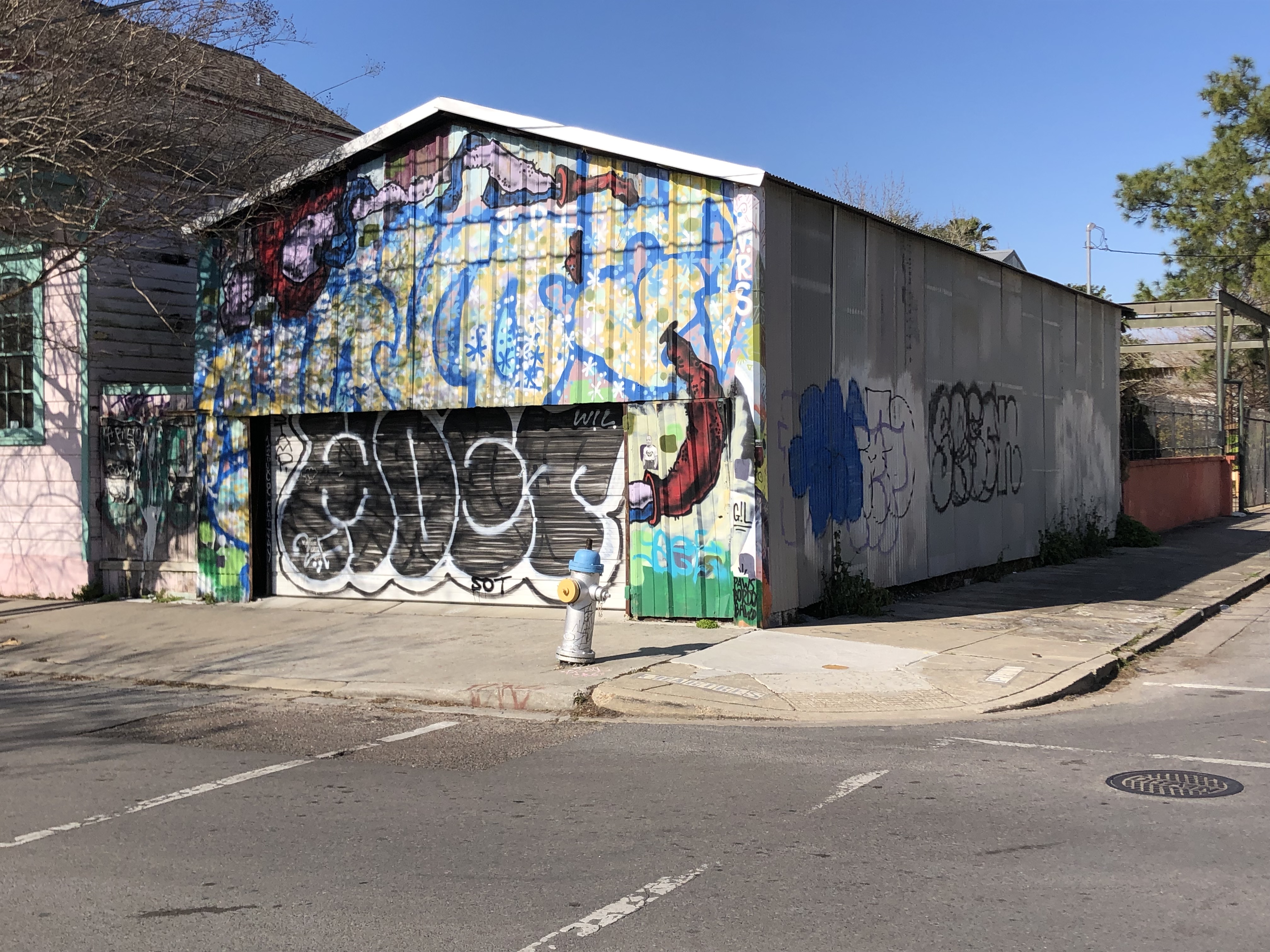 The warehouse as it is today; the entire mural is covered up and the building is tagged with graffiti.

On the corner of Chartres and Piety Street in the Bywater of New Orleans is a warehouse constructed from rough sheet metal that’s covered in graffiti and street art. It has been covered up so many times that it’s easy to miss if you happen to pass by; I did, even while specifically looking for it on Google Maps in a car going no more than 5 mph and holding up traffic. The building was once decorated with a vibrant and powerful mural dedicated to cultural awareness — originally targeted at the rapid gentrification of the Faubourg Marigny in its recovery and rebuild after Hurricane Katrina before other elements were added by a number of other street artists. As I began researching the piece, I came to find that very little information exists about it. As a result, much of my analysis of the piece comes from my own observations and inferences about the piece based on what little information I was able to find.

The piece was originally created in the summer of 2009. Rex Digler, street artist and founder of NOLA Rising, an art campaign supporting street art that provides a positive impact on the community, lead the effort [4]. Digler along with Ivan Petrovsky, a Russian street artist also known as Mustart, and a New Orleans street artist known as TARD, teamed up with a group of teenagers from New Orleans and New Jersey from the NOLA Preservation Society, an organization operating out of the northeast United States, whose goal is to bring teens to the city of New Orleans and teach them about the culture of the city through, music, art, food and more, to create the beautiful piece.

The background of the Chartres Street side of the mural is made of multi-colored pastel paint. The random and distorted splotches likely represent the numerous parishes of Louisiana, or potentially the neighborhoods of the city. The vibrant yellows, blues, purples, and greens create a great contrast and grab the attention of the pedestrians walking by, and a reflection of the surrounding area, whose classic New Orleans architecture is some of city’s most colorful. Providing a call to preserve the neighborhood’s beauty and combat the gentrification that continues to spread. Yet the pastel paint creates subtle tones to allow for the other elements of the piece to come to the foreground.

Centered at the top, just above the door are the words Rise & Preserve. A message focused on the rapidly gentrifying neighborhood of Faubourg Marigny, where the mural is located; a problem that several neighborhoods all across the city are facing. The words are a call to residents to rise up and help preserve the city and neighborhood from the rapid gentrification, before it is changed forever.

Two bare trees are located on either side of the mural to create a framing effect. In the tree on the left, a strange looking red bird with small delicate wings and a large head is perched on a branch. Its bug-like eyes, green beak, and orange teeth showing through its creepy smirk add a surreal and less serious element to an otherwise intense and powerful mural. This is most likely a reflection of the city itself, whose laid back, party mindset is juxtaposed against the crime and poverty that it is plagued by.

On the bottom right of the wall is a clenched fist rising out of the ground. The fist, a common symbol of the Black Power movement, is a focal point of the piece, and a message to rise and protect the black culture and history that flows throughout the neighborhood and city from racism and gentrification.

On the left portion of the Piety Street side of the mural is a piece by Brooklyn street artist Alison Buxton. The multi-color spectrum, ranging from reds and oranges to blues and greens, in the background provides a pop of color to the piece. This section depicts a beautifully detailed brown pelican, the state bird of Louisiana, rising out of an oil spill. It connects to the original message of the mural, to “Rise & Preserve.” The pelican represents Louisiana and the oil spill represents the numerous environmental issues that are impacting the state, many of which have to do with the massive oil industry operating out of the Gulf of Mexico. To the right of the pelican is the Katrina Cross or X-Code. This X is a FEMA “Search Code” used during Hurricane Katrina. The code would be written on a house by a search and rescue team recording any people found inside, alive or dead. This X became a symbol of the devastating hurricane and the death and destruction it wrought on the city. In the mural, the codes have been replaced with the letters spelling out N.O.L.A and the whole X is on fire, another symbol for the destruction of Hurricane Katrina and the lasting impact it has had[9]. Although not part of the original piece, this element is nonetheless impactful in the way that it depicts the deep connection between New Orleans, the oil industry, and the infamous storm whose presence is still felt through ruined buildings and infrastructure more than a decade later. 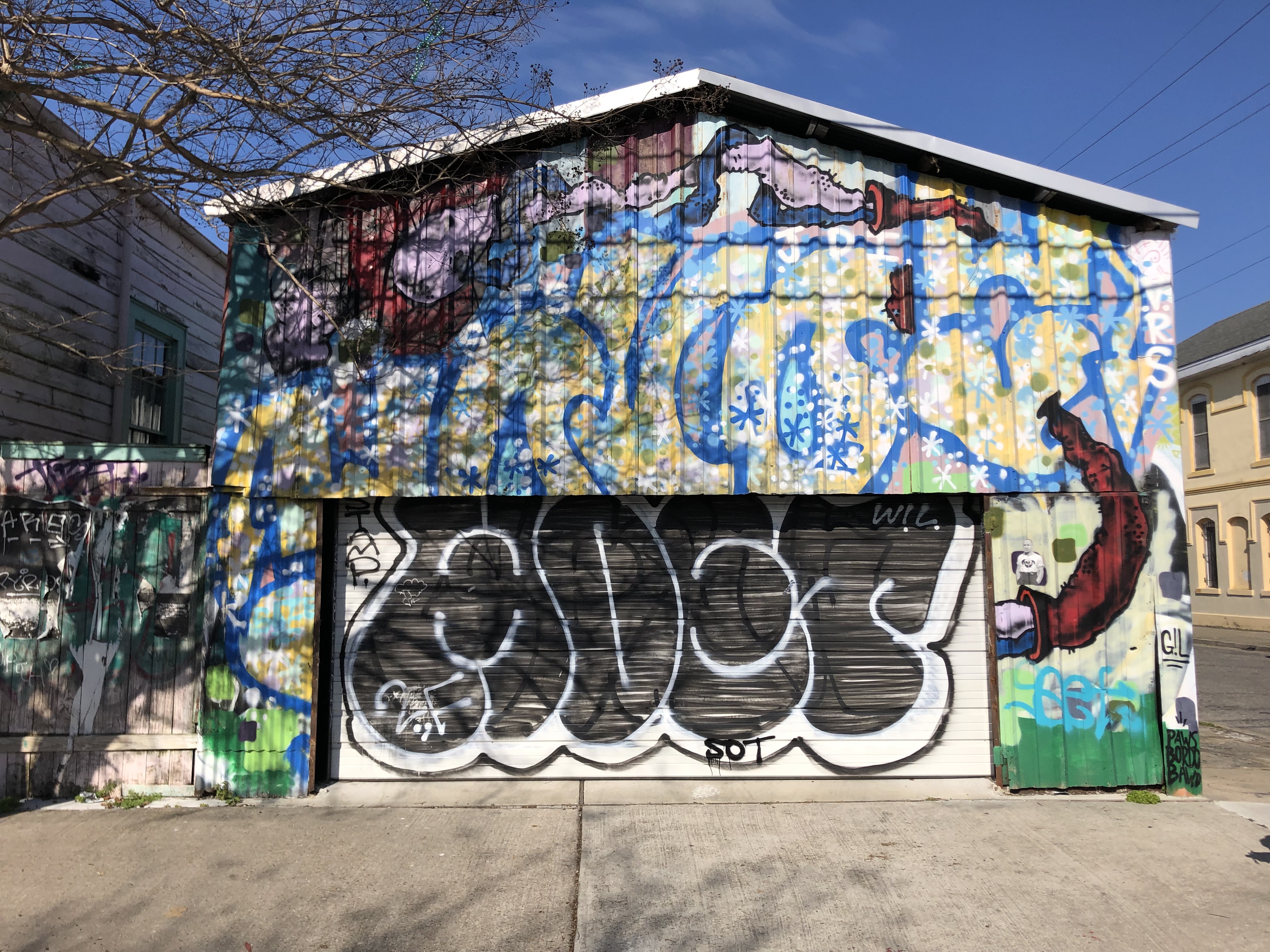 The Chartres Street side of the warehouse as it is today.

To the right of the Pelican piece on the Piety Street side of the mural is a piece by an Australian muralist. It depicts a massive, vibrant and colorful rooster in the foreground, painted with incredible detail. Every feather is meticulously painted; from the vibrant yellows, reds, and oranges making up the body and head and a spectrum of soft blues, purples, and greens creating the tail. In the background is the moon setting. This is a symbol for waking up, or rising, harkening back to the original sentiment of the mural, Rise & Preserve, calling on the residents of the neighborhood to wake up and pay attention to the various issues being addressed by each element of the mural.

The last piece on the Piety Street side of the mural is a piece I found absolutely no information about. In the background is a blue, cloud-like shape dotted with splotches of white, green, black, red, yellow and orange, drawing the eye to the piece. Also in the background appear to be cups of soda, possibly a depiction of the gluttony and obesity that plagues our society. A particularly bad problem in Louisiana, with 36% of adults[1] and 19% of children[10], ranking it 6th and 4th highest in the country respectively. In the foreground is a massive and painfully distorted mouth protruding out of the ground. Next to the mouth is a wallet with a deformed arm coming out of it holding a dollar bill, feeding it to the mouth. To me, this seems like a depiction of the self-feeding materialistic and capitalistic culture and society that we live in, which is contributing to the gentrification of the neighborhood and city. Although this symbolism is just speculation, it seems to be a fairly aggressive piece with a clear message, connected to the mantra of the mural, to point out major issues in our society, specifically in the New Orleans area.

Sadly, since its creation back in 2009, the mural has quickly become covered in graffiti tags and smaller random pieces by other street artists. By 2017, as seen on Google Maps, the entire Chartres Street side of the piece had been covered up by graffiti, with the Piety Street side being left relatively untouched. However, at some point, the owner of the building painted over the entire structure in grey paint. As of 2019, the bare structure has once again been covered in random graffiti tags. The once powerful and beautiful mural is now sadly gone. Street art such as the Rise & Preserve Mural that have a political theme are, “almost always integral to the movement,”[3] that they are associated with. It sad to see pieces like this be destroyed,  but such is the nature of public street art; eventually, other artists are going to come along and make their mark.

Rise & Preserve sets out to give a wake-up call to the residents of the Faubourg Marigny neighborhood, to “rise and preserve,” the area where they live. To prevent losing the culture that thrives in the area and city at large from gentrification and several other social issues, and it does so in a profound and beautiful way. Art and drawings are the oldest form of journalism, dating back to the cave paintings of our primitive ancestors[5], this mural is an example of how that form of journalism has persisted throughout history, even today in the age of technology and social media. Through images spray-painted on the side of a sheet metal warehouse in the middle of New Orleans, an artist is able to convey a powerful message about the issues in our society. 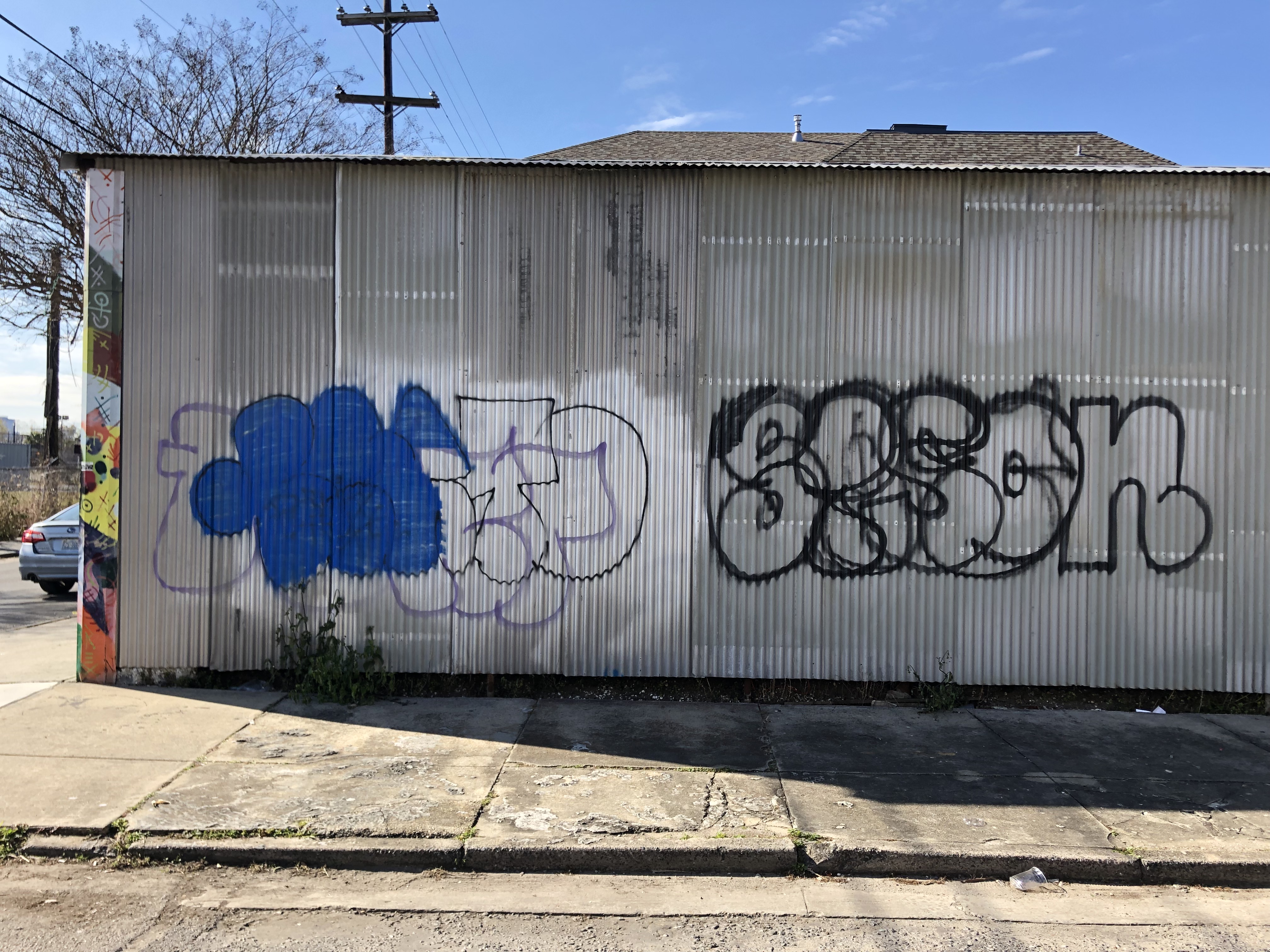 The Piety Street side of the warehouse as it is today.