The King of Kings: A look into the psychology behind Eddie Rhineheart’s King Cake scuplture and the treat we love 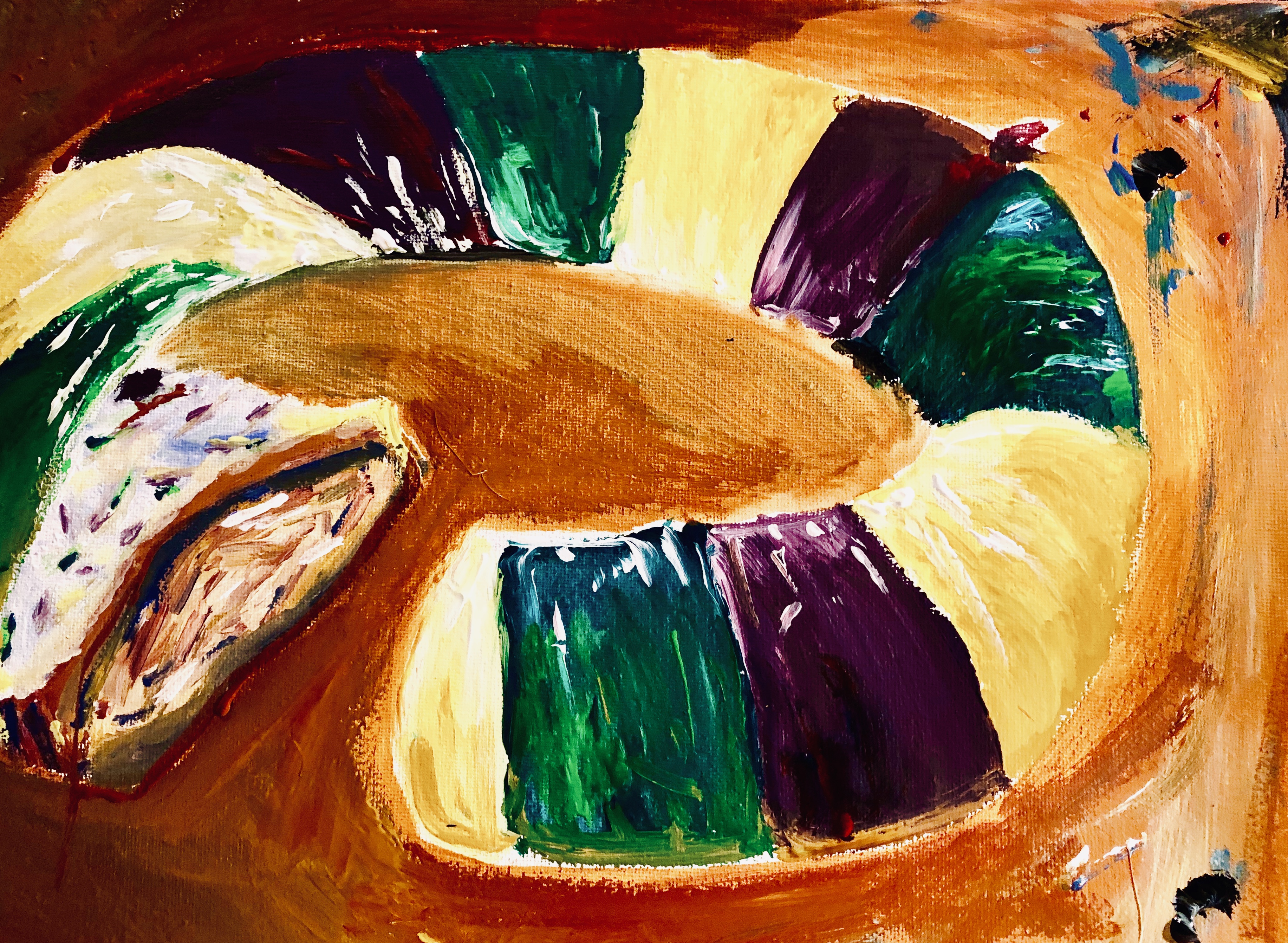 Have you ever heard the saying you are what you eat?  Well, according to scientific research, there may be some truth to that theory.  Throughout our life, especially in the early stages, we make strong connections to the food we eat. We can accredit this enigma to the attachment theory, explained by Elizabeth von Essen and Frederika Mårtensson, of the Swedish University of Agricultural Sciences.  As von Essen says, “The Attachment theory, the framework adopted by the authors, proposes that the ‘secure base’ you form in infancy provides you with the greatest resilience toward the challenges you face as you develop into adulthood and beyond” (6).  Other studies explain that the strong connections we have with food derive from our schema, which is the part of the brain that functions to organize knowledge and guide cognitive processes and behaviors.  In fact, Carole Counihan, a Professor of Anthropology states that, “Cognitive anthropology proposes that culture is a shared tacit knowledge, which is learned, socially transmitted, and organized into cognitive schemas. Cultural models are common schemas shared by members of a cultural group.  The information is communicated through social interaction and forms the basis of a cultural model. Individuals rely on memories that are constructed from stored information or current beliefs and are evoked by emotions.Through emotions, beliefs and values are internalized, creating meaning” (3).  Thus, these associations and emotional connections we have with food  play a huge role in the narrative we create for our lives. “Your food memories can sustain and influence your psychological as well as your physical well-being,” von Essen and Mårtensson says (6).

The modern crusader Eddie Rhineheart, a New Orleans chef turned artist takes us on a king-size journey through his work of art displayed in The Esplanade Mall in Kenner, Louisiana.  There in the middle of a hidden gallery in the shopping center is a giant King Cake sculpture.  Yes, I said it, a giant King Cake.   As I observed this life-size pastry, grinning ear-to-ear, I thought  to myself: What the hell am I looking at? The sculpture started off as a painting, then transferred to a small clay model, and then it was re-created again…only 12 feet larger. The sculpture is structured in the shape of a large oval and painted in rich colors of green, purple, and gold.  It stands at 12 feet long by 6 feet wide and looks good enough to eat; however, the sculpture consists entirely of twine, styrofoam, cardboard, and basically a long list of inedible materials. Rhineheart’s work of art may be completely for show; however, his realistic depiction of the cake allows the onlooker to make the same connections linked to memories.

Food strikes a nerve because it embodies the people, places, and roots our soul is homesick for, and this also includes the King Cake, which historically was The “Twelfth Night Cake” that “…paid homage to the Three Wise Men visiting the birth of Jesus after he was born” (5).  Since then, the King Cake has become closely associated with the Carnival season. According to medical anthropologist John S. Allen, there is scientific evidence that supports the belief that the connection we have to food lies in the memory storing part of our brain, which includes how we think and feel about it.  As Allen says, “Food is an effective trigger of deeper memories of feelings and emotions, internal states of the mind and body, evolution has seen to it that food in general may be a privileged target of memory in the brain. There is a part of the brain called the hippocampus (one in each hemisphere) that is critical for memory. The hippocampus is particularly important for forming long-term, declarative memories—those that can be consciously recalled and which contribute to the autobiographies that we all carry around in our heads(1).  Rhineheart emphasizes the strong correlation between food and how it shapes our world by accentuating the size and shape of the King Cake not only to highlight the absurdity linked to Mardi Gras season, but to focus on the true significance of the holiday associated with the cake.  Resting on the top of the sculpture lies a life-size baby sculpture coated in luminous gold spray paint. This additional piece serves as the focal point of the sculpture to illustrate the true context of the holiday. Rhineheart comments, “We get so lost in all of the Mardi Gras hoopla and lose sight that the little baby haphazardly shoved into the king cake, isn’t a curse to buy the next one, but a blessing to remind us that the baby died on the cross and suffered for your sins(2).  Rhineheart creates this “in your face” piece to force the onlooker to really reflect on the deeper meaning behind the notorious pastry.

Wrapped around the perimeter of the cake, there is airbrushed white frosting sliding  down the edges in this realistic “drooping” effect. Rhineheart states, “The dripping icing represents washing away our sins and how He died on the cross for our sins” (2)   The use of this small details help him convey his deeper message in an artful and functional way.  Even the circular shape of the king cake represents something greater than a function of stability.  Rhineheart claims, “The king cake paintings, sculpture and some new stuff in the works was originally based off of a Halo; that is why it’s floating. It’s to tell the story of God and Jesus” (2).

Rhineheart addresses deeper issues and sheds light on the importance of our identity by transforming food into an art form, which allows the onlooker to draw their own connections based off this representation. He accomplishes this by playing around with color, shape, texture, and size to capture the true essence of  the King Cake. Rhineheart implements these complex elements on the sculpture , which play a role in sharing his beliefs and narrative to the world. As Rhineheart says, “My gift is to Glorify God with my talent and my responsibility with this talent is more than painting a random “Jesus Piece” and saying that I’m a Christian artist. It’s to witness to others and to dig deep and address the issues people don’t want to deal with, it’s about not being comfortable and stepping out and taking a leap of faith” (2). In the case of the mysterious giant King Cake, your truth lies between the layers.

This piece was written for the class “Alternative Journalism,” which is taught at Tulane University by Kelley Crawford.