We’ve got your weekend: Exhibits, pie, and lots of other sweet things! 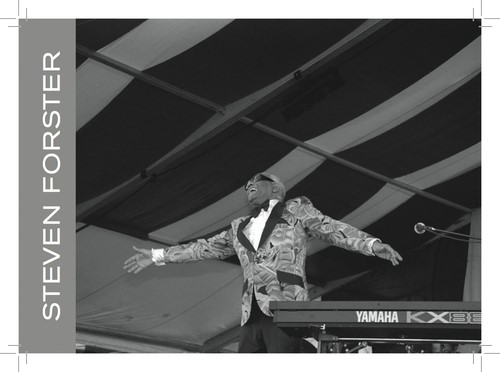 Cost: Free and open to the public

What: An exhibit that features over 40 years of Forster’s work behind the camera photographing beloved New Orleans figures and pop culture icons. Born and raised in New Orleans’ Lower Ninth Ward, Steven Forster has deep ties to The Crescent City, having previously worked at The Times-Picayune for nearly 20 years and has pieces in the permanent collections at numerous local museums. His exhibit is closing soon, so we are putting it at the top of the list.

Wednesday, January 22/Contemporary Arts Center (900 Camp Street): Science fiction, historical drama, and comedic farce are thrown into a genre blender in Sigrid Gilmer’s provocative comedy (preformed by NolaProject) Harry and the Thief.  What’s the plot? Mimi’s cousin Jeremy has a PhD in physics, a brand-new time machine, and a plan: He’s sending Mimi, a professional thief, back to 1863 to alter history by providing Harriet Tubman with modern-day guns. Lots and lots of guns. Ten performances will take place only at the Contemporary Arts Center, New Orleans. Tickets are between $20-$30, the performances are at 7:30 PM, and for more information, check out  NOLAProject.com/harry

Thursday, January 23/Jack Rose (2031 St Charles Avenue): It’s National Pie Day! Did you know this? We didn’t know this, but we are happy to celebrate it, and Jake Rose is embracing this not-so-known-holiday with their Mile High Pie. This elaborate three-tier pie consists of layers of chocolate, vanilla, and strawberry ice cream made in house, topped with merengue, and finished with a chocolate drizzle. Do you feel like you need more pie? You’re in luck because Copper Vine (1001 Poydras Street), will be offering buttermilk pie. Made with Vietnamese coffee ice cream, fresh berries, berry coulis and fresh thyme, this pie is the perfect treat for National Pie Day. So go celebrate and have a slice of pie!

Thursday, January 23/Tulane University (Jones Hall): There’s an opening reception for Tulane University Special Collections’ new exhibit, Where We Stand: Zines from New Orleans. The reception runs from 4:00 PM to 6:00 PM in the Special Collections 2nd Floor Gallery in Jones Hall. They’ll be exhibiting self-published zines, which are made from readily available materials, often sold at infoshops or zinefests or traded for other zines. Made by anyone, photocopied or hand-printed, and easily accessible, zines can be the perfect repository for personal experiences, politics, art, or writing that might not be visible in mainstream culture. And now you can dive into them. Refreshments will be provided by Martin’s.

Friday, January 24/454 Julia Street:Artist pop-ups are the new…well, pop ups, and Yellin in My Ear is a solo exhibition of the paintings of Ann Marie Auricchio. Auricchio presents her on Julia Street in order to ideally display her large scale abstract paintings. The title of this show not only expresses the loud energy of the work itself, but the unrelenting inner voice of the artist. In true to form DIY spirit, she shows us that sometimes we have to unapologetically tell the world who we are. There’s an expression of energy, and the visceral response to both physical and psychological places, which sounds like exactly what should be happening on Julia Street. The exhibit will be on display until February 5.

Sunday, January 26/Neighborhood Story Project (2002 Lapeyrouse Street): Where is Yakni Chitto? The Neighborhood Story Project will celebrate the book release of Return to Yakni Chitto: Houma Migrations, a collection of photographs and essays by Monique Michelle Verdin with stories, Houma arts, and oysters! At this book release, they’ll be talking about tracing  the indigenous Mobilian Trade Language words for “Big Country” to the area between the Mississippi and Atchafalaya rivers. The book also includes an opening essay by Houma historian and philosopher Michael Dardar, poems by Ray Moose Jackson and stories by ArtSpot Productions director Kathy Randels and Mondo Bizarro co-director Nick Slie. It begins at 2:00 PM and goes until 5:00 PM. For more details, check out their event page here.

Sunday, January 26/Jewel of the South (1026 Saint Louis Street): We hear a lot of brass instruments in New Orleans, but unless you’re getting up before the sun to venture out for Eos, bagpipes aren’t something we are often privy to. Until now.  Jewel of the South and Monkey Shoulder are having bagpipers from 7:00 to 8:00 PM and an “Address to a Haggis” to honor poet, Robert Burns. Established in the United Kingdom but celebrated worldwide, Burns Night pays homage to the Scottish poet and lyricist Robert Burns (25 January 1759 – 21 July 1796) who was known as the “Ploughman Poet” among many other epithets. Having become a cultural icon and well-loved poet on an international scale, Burns Night celebrates both his life, death, and the wonderful works he’s left behind. Imbibers will have the opportunity to see bar man Chris Hannah work his magic behind the bar and enjoy cocktails like the Rusty Nails made with Drambuie and Scotch whisky; and the Bobby Burns made with scotch, vermouth and Bénédictine liqueur. A haggis special and the full à la carte menu will also be available. So go get your hour of bagpipes!

We’ve got your weekend: Retreat, dance, bingo, and fest! Sounds about right!
Events