“An artist is someone who produces things that people don’t need to have but that he – for some reason – thinks it would be a good idea to give them.”

As Andy Warhol conveyed in this quote, “there are endless means for creating art but every artist has his or her own reasons for doing so.” Helen Escobedo, who sculpted New Orleans’ Rain Towers, is no exception. The Mexican sculptor, who died in 2010 at the age of 76, was among the first installation artists to give attention to the environment in her work. Her generous donation of Rain Towers to the city of New Orleans is very fitting for numerous reasons.

Located downtown in front of the public library, the three-part sculpture is made of bent steel, with the larger and taller middle piece displaying rain gutters that face outward. Conversely, the identically sized outer two sections have their gutters facing inward.This is very interesting because the rain water will always be part of the sculpture and build up in the center, much like New Orleans, which is sinking below sea level more and more every year. By having the gutters face inward, it shows that no matter what is done to help with flooding, eventually the water will be too much. The artist uses steel here rather than a different material to show that even if the city is flooded, this art piece would stand sturdy. The steel represents the improvements to the city and shows that New Orleans is ready for whatever disasters the future may bring. Even more, Rain Towers has trees on one side that bring it shade, while the other side gets hit directly with sunlight, perfectly representing the constant changing weather of New Orleans where it can be pouring rain one minute then be completely sunny the next.

Rain Towers is a perfect New Orleans sculpture because of the amount of rainfall the city receives, as well as the constant hurricane threats. New Orleans gets an average of 64 inches of rain per year, which is one of the highest levels of rainfall in the United States. This becomes very problematic because the city is located below sea level. Due to the amount of rain and the constant threats of hurricanes, Rain Towers perfectly depicts an image of safeguarding the city from overwhelming amounts of water that have devastated it in the past. However, these towers can only protect for so long, until eventually the excess water leads to a flood. Yet due to the steel that protects this piece of artwork, it will remain intact even if the city is underwater.

We have learned that one of the best ways to exhibit the “alternative” in society is through art. Looking at this artwork from a journalistic perspective, it can represent a different type of flood: the overflow of negative news we receive on a daily basis from the media.

We are constantly seeking and receiving information through media. In fact, 42% of the total population uses social media. Our technology is now so advanced that news coverage is presented to us in real time in a variety of manners. Social media sites have surpassed print newspapers as a news source for Americans: One in five U.S. adults say they often get news via social media. The majority of news cycles report 24 hours a day, allowing us to stay informed on news by the minute. For example, CNN was the first 24-hour news network, giving people information whenever they want. However, with so much negative news being reported in this world, this can be psychologically dangerous. Rain Towers is a perfect example of this due to its location and material. The towers are outside, uncovered and very tall. Thus, when it rains the chutes are flooded just like the media floods us with negative news. In addition, the rain towers look like they have antennas on the top, depicting the different news outlets that report negativity every day. 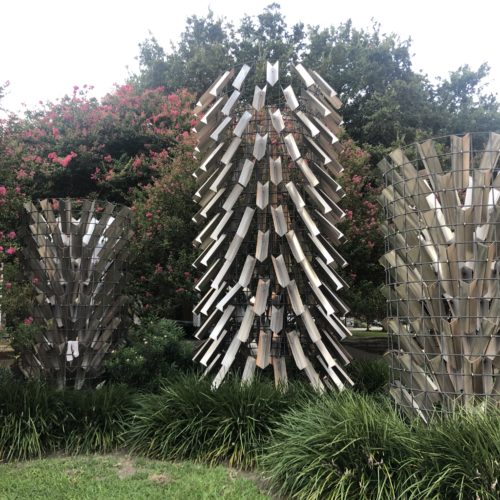 This picture was taken by Braden Olthoff and this picture shows the three different rain towers as well as some of the nature surrounding them.

The negative images being played on our televisions, popping up on our phones, or being shown to us even when we do not want to see them can have an impact on one’s mental health. In fact, a study done after 9/11 found that watching coverage of the event on television could trigger symptoms of post-traumatic stress disorder. Another survey done by the American Psychological Association found that more than half of Americans say the news causes them stress, and many report feeling anxiety, fatigue or sleep loss. The survey shows the more coverage one watched, the more severe one’s symptoms were(3). Similarly, when Rain Towers gets continually rained on, the chutes poor the water inward until the bottom of the sculpture can hold no more and the result is flooding. Although the height of the piece prevents water from reaching the top, the bottom gets filled.

In addition, while some may debate about whether the world is getting worse or not, the amount of negativity shared in the news will make us believe that it is. The Rain Gutters overflow with rain almost every day due to the amount of rain the city receives. It can be sunny all day and show no signs of rain and then pour for a few hours and cause flooding. Likewise, the news can begin with a few positive things that happened in the community, then show show story after story of negative incidents, impacting the health of viewers. 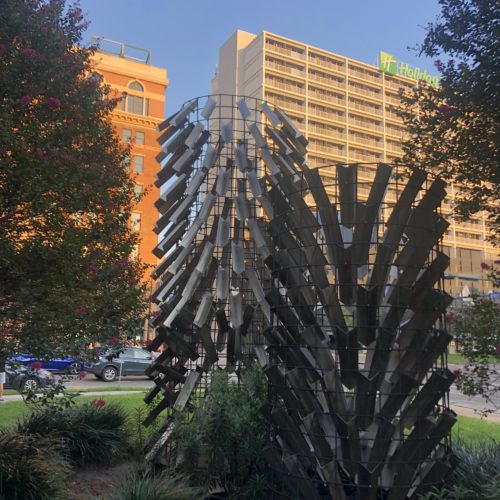 This picture was taken by Braden Olthoff and it shows the different heights between the three towers as well as some of the background from a different angle.

Interestingly, the towers make no noise when water isn’t present but when it rains, the sound of water rattling can be heard all the way down the sculpture, since the steel is symmetrical on all three towers. Much like the rain starts at the top and has a trickle down effect, so does the media; when one reports a negative story, the rest report on it, as well.

Another issue that can result from negative news is misperception, which is also evident in Rain Towers through the outside towers facing inward. These towers have water flow within, instead of having it flow away. However, the center tower has gutters facing outward so I believe it is set up like this to protect the middle tower from flooding while the outer towers soak up the water. For instance, when asking people about their neighbors and their city, they may have many positive things to say but if questioned about any place they are unfamiliar with, that’s where the problem occurs. The only knowledge they have about those places may be through the news, which often delivers the most extreme and negative things. Consequently, “when you can have news of every civilian death in Gaza or every Islamic State military advance streamed to you in real time,” you are going to have a negative image of the world around you (3).This is because if Americans don’t know much about these places, when they do hear something about them, they tend to form stereotypes. The artist shows this point in her sculpture with rain gutters that are different sizes and point different ways. An outside viewer would not understand, but looking at it from a deeper perspective it makes perfect sense.

Adding to the problem of negative news is emotion. Although reporting stories, whether they are good or bad, is part of a broadcaster’s job, whenever the news is negative broadcasters have a tendency to emotionalize it, no matter how low risk it is. A study was done in 1997 where two different 14-minute news bulletins were shown to a group. One featured all positive news and one included all negative news. Individuals who saw the negative content were found to be more anxious and sad, as well as were more likely to perceive their own worries as much worse than they actually were(1). In relation to Rain Towers, the more rain the towers receive, the more likely they are to fill up with water and ultimately flood. A little rain will not cause much harm, but the more that comes down, the worse it will be, just like negative news leads to problems for humans.

The amount of negativity that is reported on is astounding. News outlets feel that they need to give us the most emotional and terrifying stories they have. This flood of negativity impacts us psychologically and has been proven to not be healthy. Rain Towers is perfect for the city of New Orleans due to the amount of rainfall, flooding, and hurricane threats it receives. Rain Towers reflect the weather and the social climate of our current world, as well as the constant threat New Orleans continues to face. Escobedo’s piece is supposed to make its viewers take a look and see the deeper meaning while still understanding its importance to the city of New Orleans. The rain will continue to fall through the chutes of Rain Towers in New Orleans until one day when it may be too much, and it could take the city with it forever, just like the media will continue to post these negative stories and hurt lives. 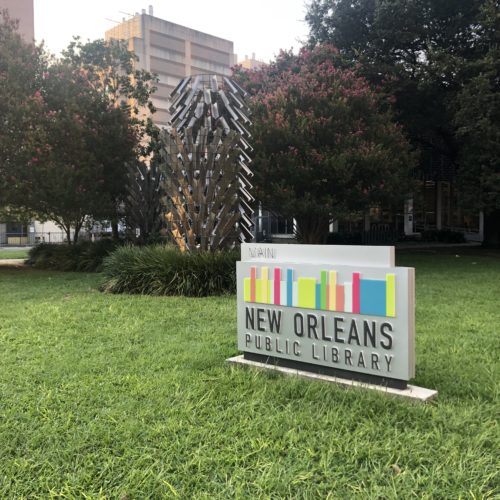 This picture was taken by Braden Olthoff and shows the location of Rain Towers. Rain Towers is located right in front of the New Orleans public library.