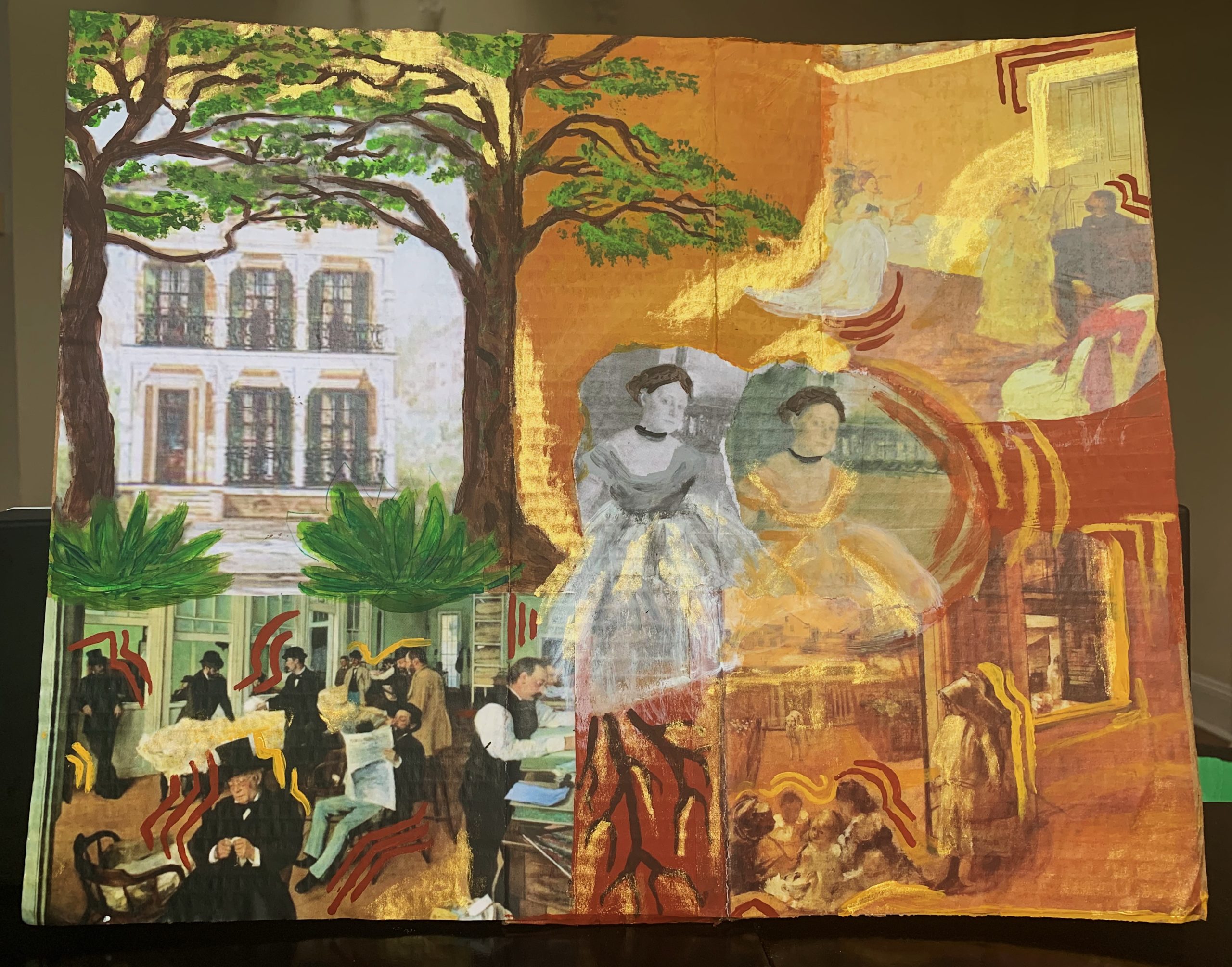 (Photo & Art by Sophia Schlager) Mixed Media – Art collage of Degas paintings he did in NOLA and layers of paint in Sophia’s own renditions.

Sitting in an old wicker chair in the Degas House at 2306 Esplanade Avenue, one wouldn’t expect their ears to be cocooned in a silent bubble of sound – fuzzy levels of white noise oscillating between different strands of monotonous buzzing. In a place that holds history surging from the walls, there’s an occasional thread of murmurs and soft tonalities of voices brushing against the edges of this silence bubble. The droning hum is enveloping, and the feeling of thickness adding pressure to your eardrums and at times becoming thunderously deafening.

This experience of silence and white noise vastly contrasts with the vibrant soundscape outside; the exterior of this museum has air rich with sounds of nature and cars zooming by on Esplanade Avenue. This silence, at its core, symbolizes power; it reflects an ordered reality that has come about through discipline (2). In research done by Gilkey, it’s exposed that silence is used as an instrument of power through how, rather than being a form of self-expression, it is imposed upon people and gives power to those who dictate it (2). In society, this power is seen and cultivated through the stipulation of acceptable behaviors in particular environments, such as museums. Within museums, viewers are expected to be silent, keep conversations to a minimum, and hold themselves to a “standard of dignity.” However, when looking at the American Alliance of Museums website at their code of ethics or core standards for museums, there is no mention of conduct rules that specifically request this behavior from attendees. How are these disciplined behaviors, and thus power, executed and maintained in the absence of blatant rules? What’s the purpose of it?

In 2012, a study done by Tröndle examined the relationship between social behavior at museums and the impacts of sociality on the reception and experience of the exhibits (3). Those who didn’t converse during exhibits were more deeply affected by the artwork, had more focused attention on the medium, and were more able to enjoy their experience (3). They concluded that the ability to immerse oneself into displayed artwork and analyze the impact, emotions, and intent mainly occurs when one doesn’t participate in the conversation (3). While this study demonstrates that silent conduct in museums is actually beneficial for the absorption and learning experience of museums, it still begs the questions; who instilled these practices in the first place?

Museums weren’t always public amenities where society could gather to learn; they used to be places of distinction only accessible by elites (3). After years of battles, the first round of museums finally opened up to the public in the eighteenth century and created expectations that there’s something valuable to be gained after going through exhibitions (3,4). Visitors not only have access to these spaces now but enter with the intention to further supplement their lives through the exhibitions. These practices of introspection and self-actualization exercised by higher-members of society paired 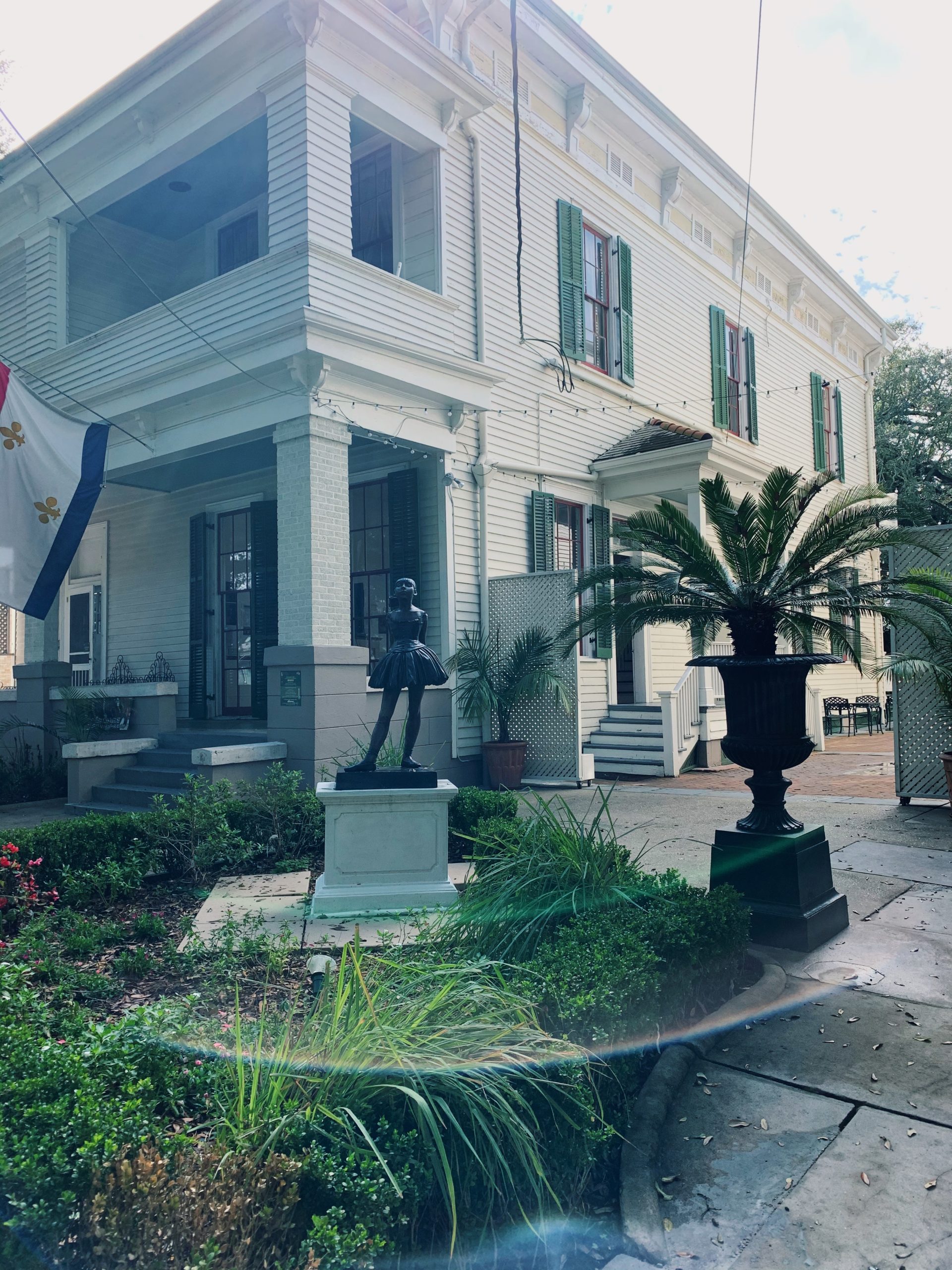 with these intentions were pressed upon the public as a way to maintain the prestige of museums (3). Museum visits were seen as a privilege granted to the public rather than a right (4). However, if all this happened years ago and museums are fully considered within the public domain, why do people still uphold these rules of conduct? The persistence and preservation of silence in these spaces demonstrate a larger phenomenon at play here; the museum experience is a display of social norms in effect.

However, it’s not enough to only have a social norm. Tesar, in his study investigating the influence of social norms and expectations on individual behaviors, shows that existing social norms don’t always mean that there’s compliance to it (6). The main factor that contributes to the conformity of norms is an air of expectancy; one obeys a norm when they assume that others will follow the norm, and when others expect that person to comply with the norm as well (6). Based on this study, the social norm of silence is upheld because not only does one expect others to be silent, but they feel that the community of visitors also expects them to be silent. When at the Degas House, this compliance is heard through the dominant sounds of silence from museum attendees; they are all silent because of these interplays of social expectations and conformity. But, in the recording, one hears the occasional breaking of this silence with the murmurs from workers cleaning the hotel rooms above the museum.

This breaking of the reigning silence, which is used through social norms as a means of control over people within society, is particularly significant in the Degas House. It highlights how there’s a difference in experiences between attendees and workers who maintain cultural spaces. The visitors and collections within this museum are the main focus and are at the forefront of the exhibitions, whereas the employees and the work they do to maintain that space are invisible; they are hidden and silenced. However, the fact that it was workers, not attendees, who broke this silence symbolizes how working classes push at edges of social norms in attempts to change them. This encapsulates the same dynamics that Degas was observing and capturing in his paintings in 1872 when he was in New Orleans.

When Degas visited New Orleans, it was during the height of Reconstruction and there were tensions between the New Orleans elite class and the newly freed working class (5). Slaves who had been silenced now had a voice as a result of the Civil War, and they were using it during Reconstruction to lead efforts to enfold newly freed workers into New Orleans society. (5). However, the attachment of white Southerners to their ways of life was still strong and they were determined as ever to preserve it (5). Among this class were Degas’s relatives who were wealthy cotton owners in an industry that was rapidly dwindling (1). Degas’s family members were trying to hold onto the social norms they were used to, in keeping their mansion on Esplanade, going to the opera, trying to keep servants in the house, entertaining guests, and having visits from trained ‘aestheticians’ (1).

These social norms of the elite were built on and sustained through the silence of lower classes, such as slaves; they were able to be powerful and exert power over others because of this control of silence. However, once workers started resisting this silence by breaking it, it brought about change and reconstructed the power dynamics of social norms. Degas, in his paintings, captures his family struggling to reconcile this new reality with their dreams of the past. The Degas house, in being a cultural space that both maintains social norms, with museum attendees’ silence, and a constant challenger of them, with the breaking of this silence through the workers, stands as a place that reveals the fickleness of social norms and power dynamics.

This piece was written for the “Hear/Here” series, which is an on-going public art and sound investigation through the class Alternative Journalism at Tulane University. This class is taught by Kelley Crawford.

Bursting bubbles : Disparities of the Trans-experience in NOLA
Gender and Sexuality