Hear/Here: Bringing peace to the chaos of Katrina

The sounds of birds chirping and blissful wind blowing is continuous. Every now and then, voices appear and then disappear quickly after. Cars drive by, and bikes turn the corner. Life seems to be moving by, but the sound of peace is steady. As cars continue to drive by, the busy street of North Rampart is accompanied with what many people would walk right by and not even stop to notice, Banksy’s Rain Girl. 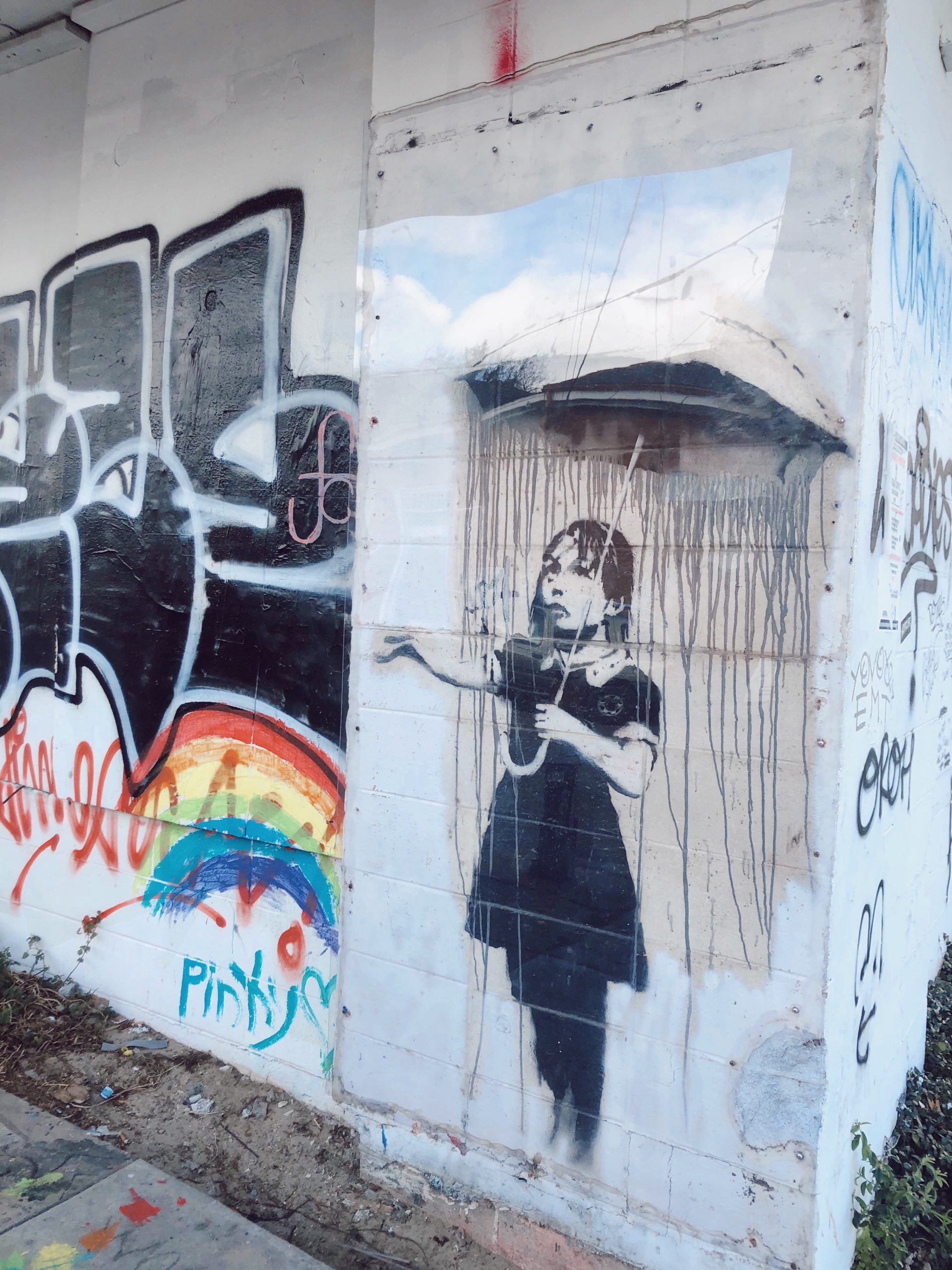 Still of Banksy’s Rain Girl on the corner of N. Rampart Street in the Bayou of New Orleans

On the corner of N Rampart and Kerlerec is a small white building located in the Bayou of New Orleans, a section of the city that was primarily affected by Hurricane Katrina in 2005. Katrina was one of the top three  deadliest hurricanes to hit the United States; in fact, 80% of the city was underwater for weeks afterwards, and it was recorded that “more than 1,836 people were killed” during this murderous storm (3). The levee system was not strong enough and led to many deaths and destruction. The aftermath of Katrina did not only affect and uncover  information about the city of New Orleans, it also “revealed as much about American society and the inextricable link between race, class, gender, and age in our nation as it did about nature’s fury” (3). Yet, as these facts reference water and the devastation it caused, there is not a single sound of water during my recording. As hurricane Katrina destroyed New Orleans, the poverty and inequality of specifically African Americans became so blatantly clear to the entire country of the United States. Katrina brought this awareness to the country, and it was clear that something had to be fixed.

After hearing about how hard the Bayou was tragically hit by Hurricane Katrina, I expected to hear rage and discourage, but as I stood on the corner in the Bayou, and stared at the street art of Banky’s Rain Girl, fury was not what I heard. In fact, fury was quite the opposite. I heard the sound of constant wind blowing through the air. I wonder if the birds would be chirping, and the wind would be blowing as softly as it was the other day. As the footsteps quickly approached, the sound of friction was not present. The people walking by seemed to be living their lives and going about their day with no worries or anger to be heard. Susan Toth, a well renowned author of many publications described that, “robins are loudly singing in the lilacs, so perhaps the rain will hold off for a little while longer” (3). This concept that when the birds are chirping, there will be no rain proves that the birds are at peace, and are not worried about another natural disaster occuring anytime soon. It is almost as if they are singing of joy. This translates into the people walking by, with no fear or concern, chirping just like the birds.

Post Katrina, Banksy went around and painted hurricane street art all throughout the city. Street art has been defined as a “form of public communication” (2). It is important to understand that street art is supposed to be understood and appreciated by the entire community, not just artists. Banksy used street art to bring peace, and take away fury, from the city of New Orleans and specifically, the Bayou area. The presence of natural noise, and not machinery noise which Susan Toth describes represents “trouble, money, time, and worry” (3), indicates that Banksy brought the opposite of worry and trouble; Banksy brought peace and contentment, which is portrayed through the sounds of wind, gratified voices, and cars driving by.

I now wonder what noises I would hear if I stood in that exact spot in the year of and after Hurricane Katrina. While I do not know what their lives consist of, or what their brains were thinking, I listened to their content gate. I heard a constant pace. Nobody ran past in a hurry, and nobody stomped by with anger. The sound of a car even drove by, with the windows down, and a beat loudly playing through the radio. I also heard soft voices of the people walking down the street. Some people stopped to look at the painting on the side of the building, some didn’t notice it at all. These soft voices represent contentment. As Phillip Hubert once said, “the original use of the sense of hearing was to enable man and animals to perceive the approach of danger and thus avoid it, whether it was a loud roar of the tempest, he put himself on guard” (2). In the case of the Bayou, I heard soft voices, rather than loud voices, because the inhabitants were not feeling at danger. If they were to feel unsafe due to Mother Nature, they would have been much louder and in a panic.

Street art has a lot of power to change its environment. Post Katrina, the city of New Orleans was in pieces, physically and mentally. Street art’s purpose is “to advance the cause of an idea” (2). In Banksy’s case, the Rain Girl’s purpose was to reassure the city of New Orleans that they would persevere and one day be ok again. The birds are chirping as a constant reminder to keep going, and to not give up. The New Orleans inhabitants are reassured, and therefore carry on talking with one another. Though it probably took a lot of time, the presence of this piece of art on the side of the small white building, was a sign of hope for the future. It has been described that street art, “identifies problems, questions values, makes claims, and suggests alternatives” (2). These problems included, “80% of New Orleans being flooded for several weeks and competition between parishes for resources which led to an unstable city dynamic (4).  The sounds of chirping birds, wind blowing, and the soft voices of inhabitants, proves that these “alternatives,” that Cowick references, have worked. Instead of losing all hope, and giving up, these sounds represent what the street art has offered, alternatives. These alternatives include inspiration of art and coming together instead of turning to competition. The noises of birds chirping and wind blowing replace what could have been the noise of flooding water, “a sound of something emptying, something else spreading and filling up” (3), in the case of Katrina, the flooding water that destroyed the peace of the city. If Banksy’s Rain Girl has proven anything, however, it is that when a community comes together, the birds will chirp with joy and the people will walk without worry. Both of these sounds represent an umbrella that is blocking the rain, and because of this umbrella, the community will come out on the other side. 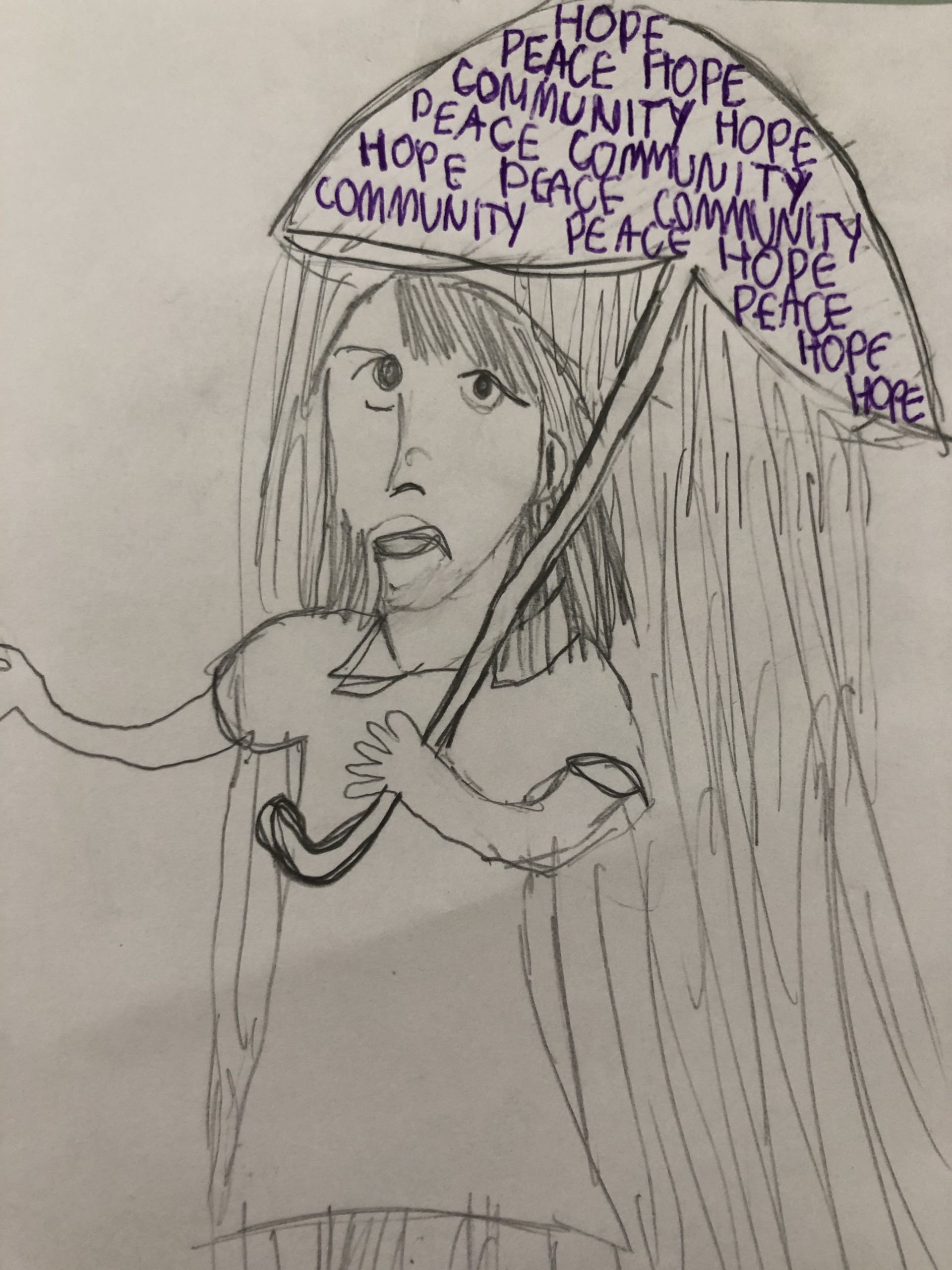 Towards the middle of my recording, there is the sound of the wheel of a car going into a puddle. The car continues to drive by, “as the motor vibrates steadily and loudly, we will get to where we are going” (3). This noise of cars passing by indicates that the people of New Orleans know that there is good ahead. They will get through their current struggles, and end up on the other side. I understood this noise as perseverance in the community. New Orleans is no longer afraid of the rain. Mother Nature has always been after humans. Unpredictable natural disasters occur everywhere and often. Humans have learned how to persevere through. A lot of this perseverance comes from the support of other humans. New Orleans is a great example of this. If anything came from Hurricane Katrina, it was the support that was offered not only from survivor to survivor, but from other states as well, that were not affected by the natural disaster. Storms come through often, and there are few days when puddles are not present. Instead of being afraid, or brought down however, the cars keep driving by, and the people continue to be okay. As my recording comes to an end, the last sound that sticks out is the wind chime that is right around the side of the building. It is a peaceful end to what exists on this street corner. Wind chimes remind me of tranquility, and rest, two things that New Orleans wouldn’t have expected would ever exist again after Katrina. Yet, here on the corner of N Rampart and Kerlerec exists peace, and here on the corner, exists Banky’s Rain Girl.