Each week on their WWNO radio segment, TLP explores issues ranging from healthcare and WhoDat, to tattoos and transportation. Listeners are able to contribute via TLP recording devices at local libraries or via a text messaging service, which then became source material for these programs. This piece aired on October 15, 2013. 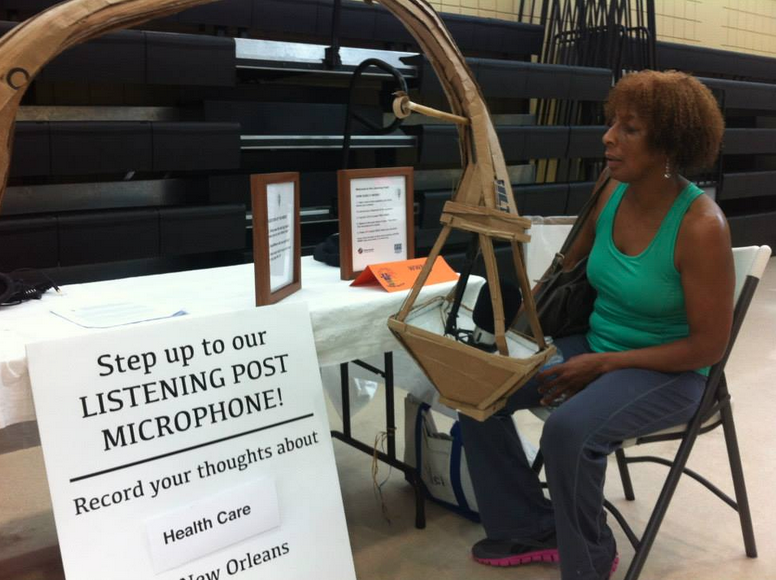 The Listening Post visited a health fair in Tremé to hear what people have to say about healthcare in the city.
(Photo by: Jesse Hardman)

Hundreds of thousands of Louisiana residents don’t have health insurance. The number ranges from about 600,000 to 900,000.

The federal health insurance exchanges opened for enrollment on Oct. 1. The idea is to get uncovered people into an insurance plan, with a mix of government subsidies and a co-pay from the recipient. However, many people below the poverty line will still need to rely on Louisiana’s safety net hospitals.

WWNO’s Listening Post project set up digital recording stations in Mid-City, Gentilly, a health care fair in the Tremé, and a senior citizens meeting at the Harmony Oaks housing development in Central City to hear some local voices on health care issues. The Listening Post asked people to answer these questions:

Here are some highlights:

Wayne Benjamin (aka Wild Wayne — the afternoon host/DJ on New Orleans’ Q93) describes a hospital visit for his young daughter’s severe stomach pains. The problem turned out to be minor, but he was charged over $1,000 due to an insurance mixup.

Gloria  is in a senior citizens group at Harmony Oaks. She says that after Katrina she had a blood clot and had to walk across the bridge from the West Bank to go to the hospital. She had a triple bypass, which she paid for with Medicare and Medicaid. “The health issues over here for the elderly are really really poor,” she adds. “The don’t have transportation; they have to wait until their family members come to go to the doctor. And I think that is really sad.”

Jamal from the Headquarters Barbershop says that he had to get surgery on his hand, but he didn’t have any insurance so he had to pay the $5,000 out of his own pocket. Furthermore, the surgery left his hand permanently impaired. “I think that by me not having insurance, I wasn’t able to get the top notch health care that I would have had if I did have insurance,” he says.

Other participants lament the lack of healthcare facilities in New Orleans East and lack of coverage for people coming out of prison.

From a Central City porch: Voices from The Listening Post
Audio and Podcasts
We use cookies to ensure that we give you the best experience on our website. If you continue to use this site we will assume that you are happy with it.Ok