In search of radical equity: In conversation with Lucky Art Fair’s Rosalie Smith and Regina Parkinson

A few months ago, I sat down with two of the co-founders of the Lucky Art Fair to talk about their two-weekend long residence at the Lucky Inn Hotel, what their goals were for the events, and what they hope to do in the future. This interview has been edited for length and clarity

David Benedetto: So, how did the art fair come into being?

Rosalie Smith: It was a very New Orleans beginning. I ran into somebody I hadn’t seen for years in a bar, and he was like, ‘Hey! I have this friend who is developing a hotel and he wants artists to like do something with it before it finishes being renovated.’ And I didn’t believe him for a second, but then I had this idea three weeks later watching Art Basel happen with these feelings of growing frustration with the political currents and the themes that the art world focuses on– [how] it all kind of evolves and becomes more progressive with time, but [that] the financial structure continues to only serve a really select group of people and remains stagnant. So, I wanted to come up with an art fair that was essentially socialist in nature, where art that was not conventionally marketable would be valued equally. Basically where artists are getting paid for making unmarketable work.

After I had the idea, I immediately put together a team with Regina Parkinson, Kate McCurdy and Taylor Balkissoon and we later brought on Kelsey Scult. We also worked with Ernest English during that time too. Yeah, I have some kind of administrative dream team thing going on. I think we think we all worked really hard. So what ended up happening with our model is that artists are paid via donations that we get [from] a sliding scale entrance fee. And then the donations are pro-rated based on the artists’ individual sales. So we ended up being able to pay artists between $150 and $500 for their contributions to the fair, and we worked with over 30 [artists], so that felt really great.

DB: What kind of feedback did you get from the artists at the event?

RS: The [feedback] was immensely positive. I don’t want to be super self-aggrandizing, but I think the best thing about it was that we managed to create an artistic community where people really felt nurtured and no one felt like the administrative structures were oppressive to them. We also were able to work with lots of incredible performers and curators of film and music ,and we were able to pay all of those people as well, and that feels so good. It feels so good to give money to artists for the work that they do. That never happens so… [Laughter]

DB: Could you go into what it takes to get this event off the ground?

Regina Parkinson: When you start off with an idea like this it’s so easy to get really grandiose in the way you want it to be and the fun part for me, which I don’t think this is normal for most people, is breaking that down into minute steps. So, I’ve run an art gallery, I’ve done my own curated projects, and so it’s a lot of starting small. Honestly, the first thing that we talked about a lot was which artists we wanted in this and how are we going to find them and what’s the scale? When they come in and they send in our application, how are we rating that scale?

It’s a really small scene in New Orleans. We all knew that our friends, people we knew or like were one degree away from, were going to apply. And so the rubric we had set up was actually you’ve lost a point if you knew us or you’ve gained a point for being from New Orleans as a way of being better about finding those people that are too scared to apply to this. And I would say I do feel like there’s always room for improvement and diversity in who gets shown and whose voices get heard. Always. But I felt really proud of how many artists [that] this was their first time applying to something or– even better– when they were like, ‘I didn’t expect to get in at all!’ And I was like, ‘That’s why we want you.’ 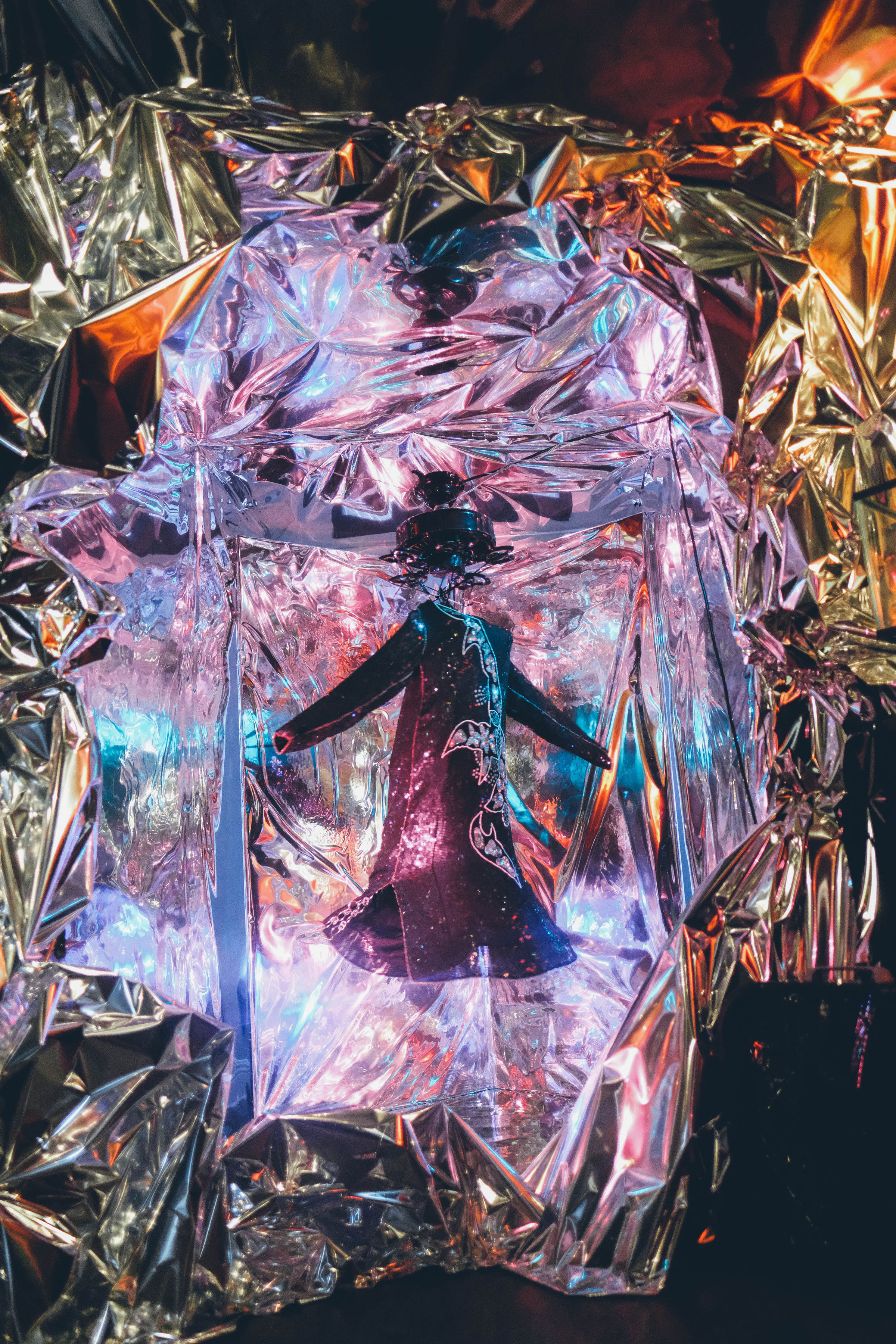 DB: One of the taglines you had on your poster was ‘Radical Equity in Income and Opportunity,’ and I think that is really important. I was wonder if you could talk about really enacting that tagline and making it happen in action?

RS: The structure that I came up with for the fair was based on my own experience as an artist in New Orleans and in the world in general and [also] the experiences I had heard from so many friends.  The big thing that I observe in the New Orleans art scene is that we kind of see the same people shown over and again, and opportunities are given to people who have proven themselves. I think it was just trying to be as intentional as possible about creating a space that would include people of all financial and social backgrounds.

We really valued artists who were doing something experimental with their work, we valued people who were doing installations and work that’s not conventionally marketable. And normally that work ends up being a major drain. That’s the kind of work that I make, and I spend a bunch of time and money making it, and then I don’t get anything in return. [Mostly] I get a bunch of people saying, ‘Wow, this was amazing. Good job. Thank you so much. Bye.’ There’s no financial return from making that kind of work, and that’s the kind of work that I think we actually need to see more of. [Work] that is more challenging and can create these incredible emotional responses in the viewers.

RP: I think it’s radical to acknowledge the financial needs of artists. I think a lot of other art organizations in the city are trying to do similar work as us are  focusing on including a diverse group of artists as we also are, but that inability to sustain a livelihood is rarely acknowledged. Like maybe these opportunities, shows, or workshops are given, but that doesn’t equate actual money in peoples’ hands. And Lucky, we ended up having about 30% of our artists who were people of color and a little over 30% of people who were born and raised in New Louisiana or New Orleans. I think that that’s really important, and those are both numbers that we would like to be a lot higher in the future in order to really achieve the radical equity that we are searching for.

DB: Rosalie, you also have your own art and projects– how would you describe your practice or your art to someone who’s never seen it before?

RS: I’m attracted to different sorts of artifacts or materials that tell us a story– normally one about injustice of different kinds. I do a lot of site specific work. The work that I showed at Lucky entirely used objects from the Lucky Inn Hotel, which is a former hourly hotel. So I found a Bible that was really well loved and somebody had  just written notes all over it and underlined tons of stuff, and I used that Bible to completely wallpaper my room there. Then, in the center of the room, there was a desk that had belonged to a long term tenant there, and it had all of her personal belongings still in it. So I poured resin in that to perfectly preserve that.

Then, I was taking apart box springs thinking I was going to make a piece of them, but I found this lining in them that had this beautiful imprint of the grid of the box spring — it just shows the weight of bodies [that slept on it] so well — so those two things were hanging on the walls as well. And all of that work really felt like it was about documenting the labor that took place in the space. And a lot of a lot of my work is about seeing these metaphors and finding these objects and re-contextualizing them to tell a story and [to] create an access point to somebody else’s lived experience for the viewer.

DB: What about you, Regina?

RP: Admittedly, I’m a little more scattered just in the sense that I have so many multiple interests that really revolve around creative business making. I’m a just certified Doula, and I’m starting my journey on that path– which I know seems unrelated, but actually I was just talking about how the empathetic connection between women is incredibly important to me. So I tend to really be attracted to female artists that are making that kind of art [as well as] other parts of the world that are doing that.  I also have been curating shows at Art Klub, and I’m starting to get involved at 912 Julia, which is another small interesting art pocket on Julia Street. So, I’ll just keep making shows whenever I can.

DB: What are you looking at for the future? How do you see this event and organization growing?

RS: We’re very excited about the future of Lucky. Because this was successful in the ways that we wanted it to be, we feel pumped and ready to do it again. So we have some smaller shows that we are hoping to put together over the course of the next year, and then we’ve got our eye on trying to do Lucky 2.0 about this time next year or even next fall. What that involves is finding the right space so we are on the lookout for developers that really liked our project and think that it would help their space. Developers that are invested in connecting on a deeper level with those people creating in the city.  That’s what we have on the docket. It’s going to be a very interesting and a natural exploration as we try to progress into non-profit status and try to figure out the internal structure of our organization.

RP: I did want to mention that Kate McCurdy who’s also here in the studio is one of our core organizers ,and she had the idea of doing a Lucky Art Fair fashion show. And we would structure that similarly with donations, prorated sales, and incorporating lots of different voices in the city [considering that] we’re a site for really unique clothing makers. So people should keep an eye and ear open about that.

More information about Lucky Art Fair can be found at www.luckyartfair.com.