Making a madman: In conversation with People Museum’s Claire Givens and Jeremy Phipps 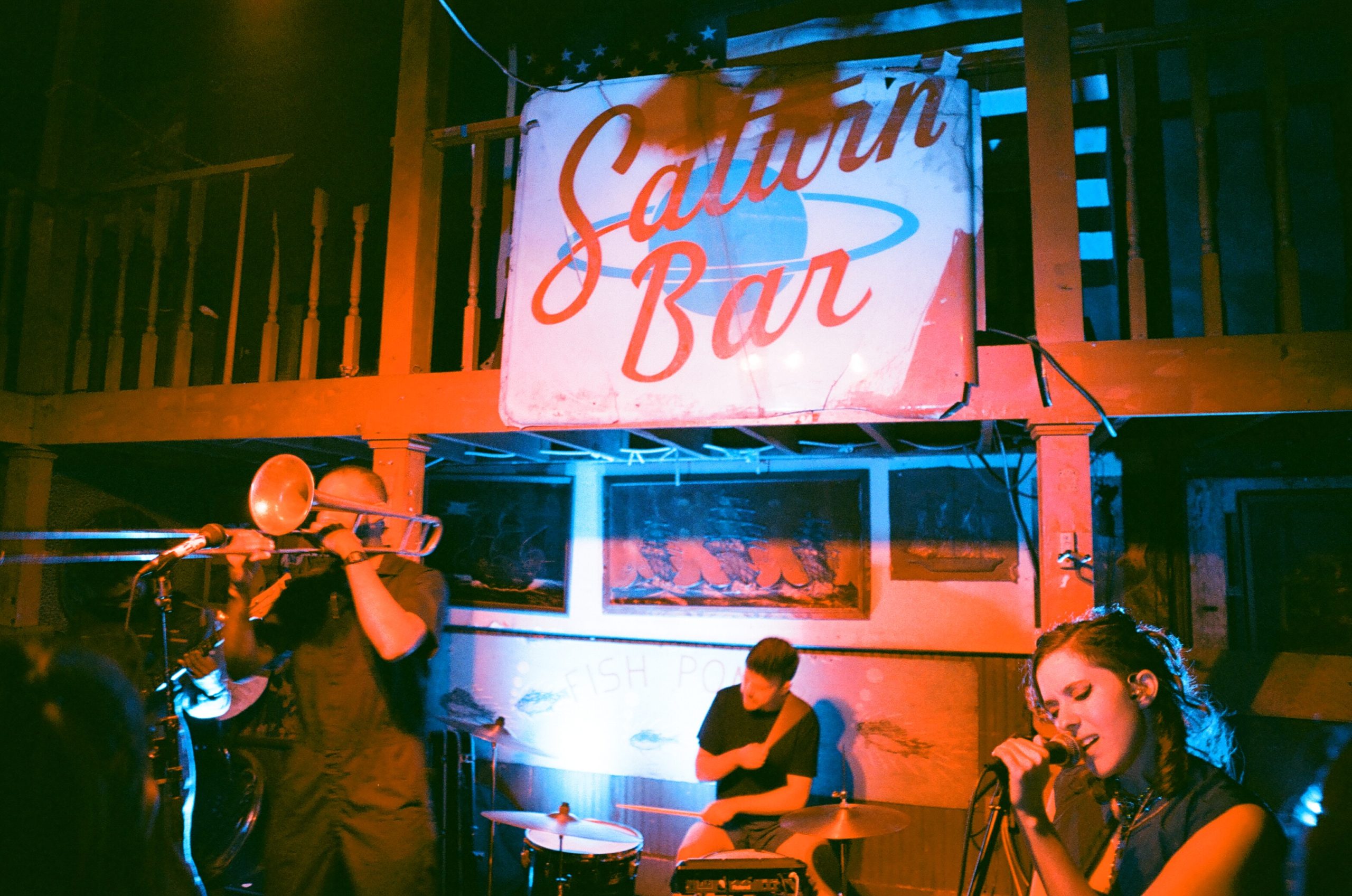 Local alternative pop group People Museum is out with a new EP and will be performing on Friday (Jan 31st) at One Eyed Jack’s in support of the band Riarosa. Earlier this month they stopped by the studio to talk new songs, putting brass at the forefront, and what goes into their musical collaboration. Check it all out below:

David Benedetto: To get started, I know you have this new EP out and I wanted to know how long you’ve been working on it?

Jeremy Phipps: It’s been kind of a short process. We started writing the songs on their like a year ago I think. And then the recording process is usually pretty fast– I think it took us like a month or two to record and then to mix. And then we put it out.

Claire Givens: So we have a small band [of] four people. And we put a lot of stuff into tracks. So we have to have everything put together to play a song regardless. So we basically had the formation of all this stuff ready to go a year ago. Our drummer’s the engineer, so we were just basically perfecting everything in a month.

DB: That’s really cool! Did the creative process for you all change since your first EP in 2017?

CG: It’s kind of exactly the same? Like the way that me and Jeremy work– basically Jeremy will send me a track of like basic drums, basic beat, keys, synthesizers. And then I’ll write vocals, melodies, [and] harmonies on top of it and then we kind of join together after that. It’s a separate process that we bring together at the very end.

JP: Yeah, that’s what we do pretty much– I just like to do things in the same way a lot of times. I eat breakfast at the same spot, I get coffee at the same place. [Laughing]

CG: I mean it works so well for us!! Jeremy is so good at what he does, I feel like I know what I’m good at and it just kind of works together. It’s a good mix. 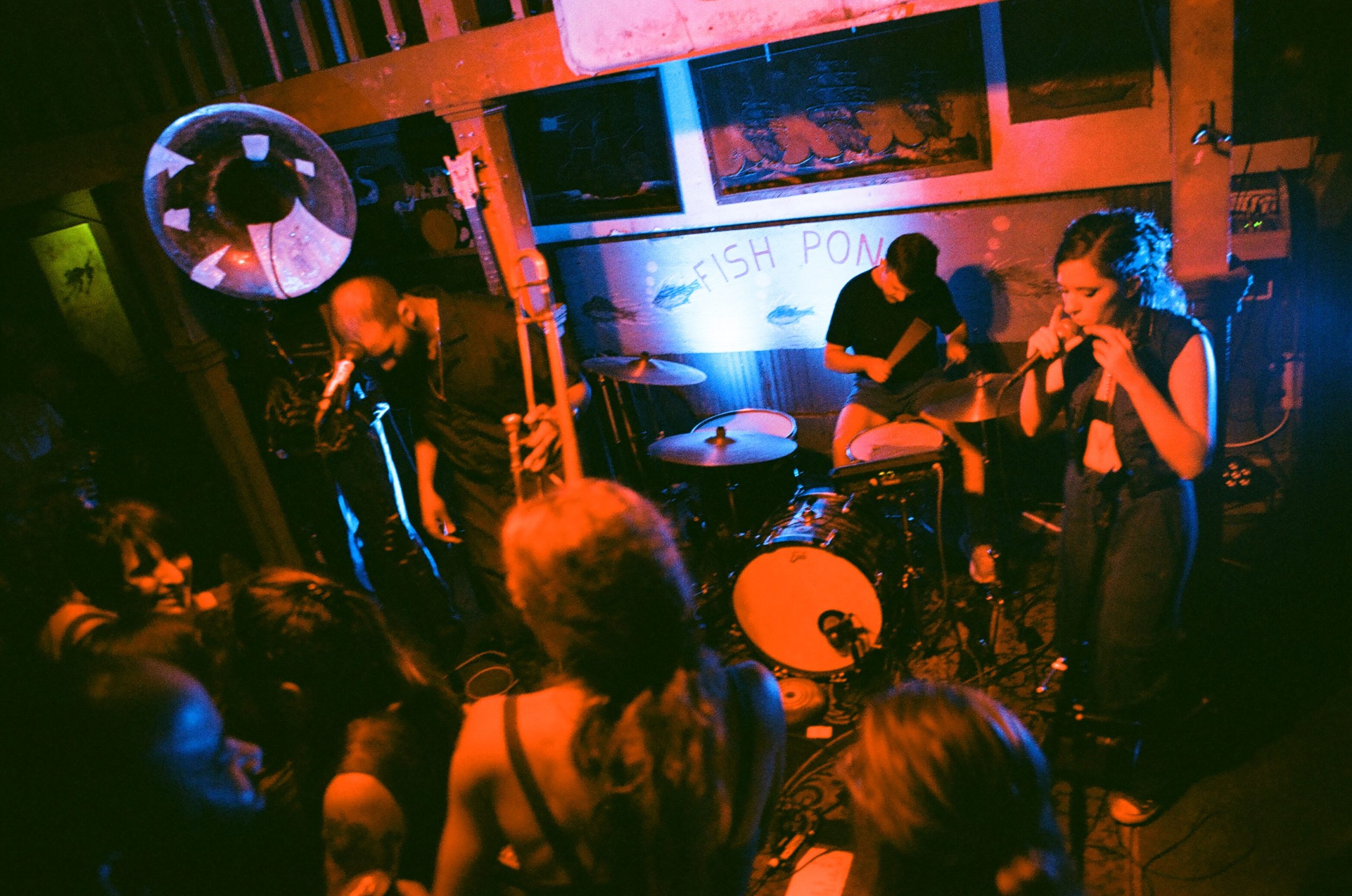 DB: I know you started this project back in 2016 right. What were the goals you had for this project and how do you think those have changed over the years?

JP: I did a lot of projects before this not in a very collaborative sense. It was a lot of like, “I’m gonna’ do everything myself!” But my goal with People Museum was to do something where I’m collaborating with somebody– which is Claire– but also just trying to find like the best musicians [or] people that I love to play with and trying to get them involved.

It’s been nice so far because we love our drummer’s drumming and I love our bass player’s bass playing and I love Claire’s singing and like the people who’ve worked with us visually. I really love everybody involved and [that] it’s not so much of, “Me! Me! Me!” you know?

CG: I definitely agree! I think my goal was to make music that I wanted to listen to and that kind of healed me while it was healing other people– kind of like this cathartic thing that I wanted to happen. And that happens when Jeremy sends me a song and I can articulate myself with that song and then maybe other people listen to it and they’re like, “Oh! This makes so much sense. Now I can work out this thought process in my head because of the song.” That was the whole thing for me from the beginning. 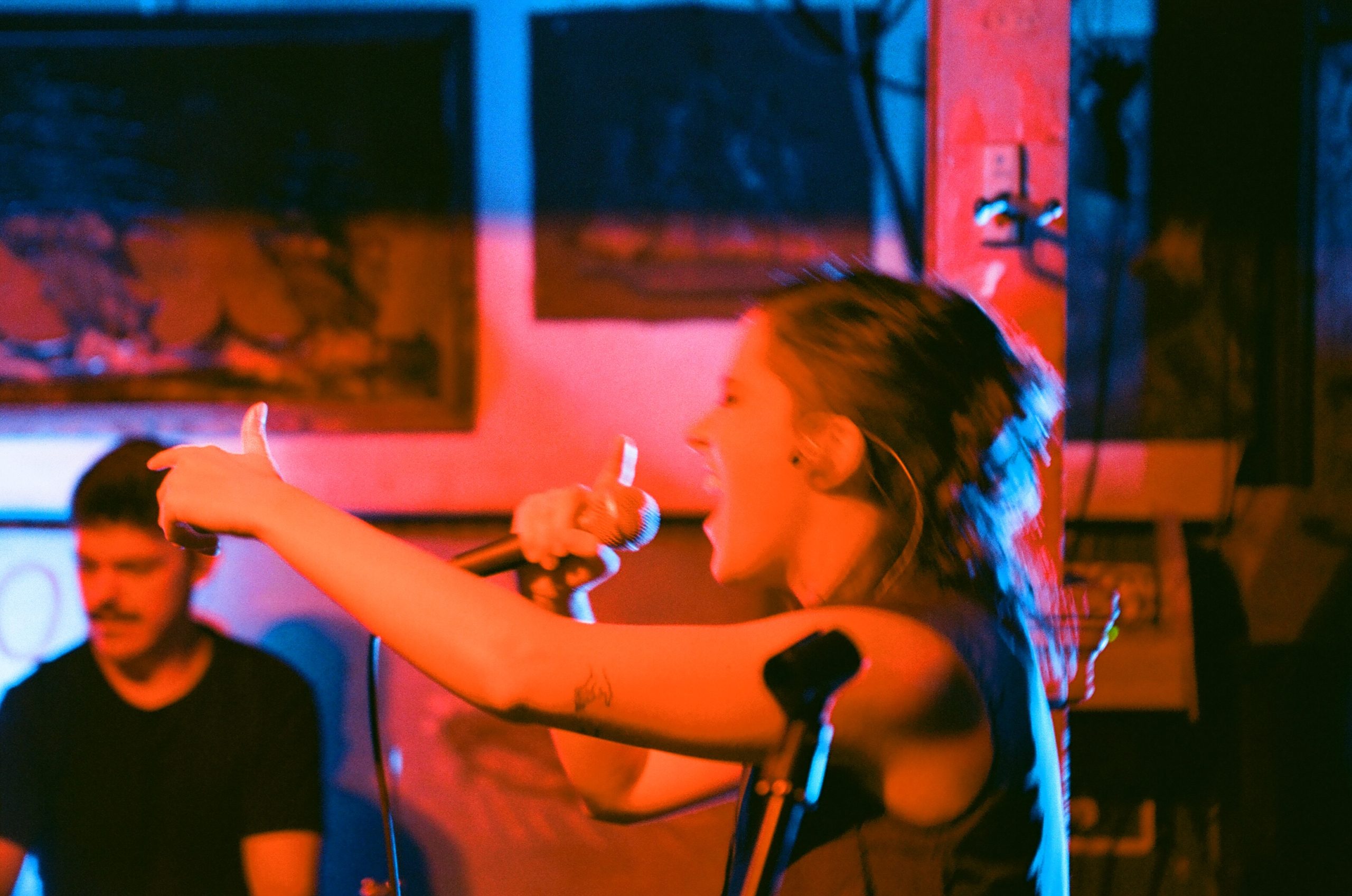 DB: Claire, I know you in particular have a classical and choral background. What was the transition like from that into the pop-alternative range?

CG: So I still to this day like a love choral music [and] classical music. I still do it. I still work at a church– my mom’s a choir teacher and my dad’s a choir teacher. I love that music, but when I was in school doing that music I was really frustrated because I [felt] like I could do something else that could be helpful to myself and helpful to other people maybe.

And I was also really frustrated with having to be perfect. This perfection is possible thing was ingrained in me as a little kid so I was like, “Okay, I’m gonna move to New Orleans when I graduate from college and I’m going to just do whatever I want to do.” And I met Jeremy and then the ball got moving and I got a fire under me to make music myself.

DB: That’s really cool. Kind of like giving yourself permission to explore and to be in a new context.

CG: Yeah, for sure. New Orleans definitely gives you the confidence to just be a creative person in all aspects of your life.

DB: Jeremy, to kind of turn it on to you– I know growing up in New Orleans and playing trombone in jazz bands and touring with the likes of Solange and Rubble Bucket. It’s interesting to see you transition into a genre that uses brass and strings more as an ornament than as an integral part, but I feel like the brass and the trombone in particular is very much at the core of People Museum’s sound. Could you talk about writing music like that?

JP: It’s one of the things that I care about the most as far as being a brass player. But it’s also like the hardest thing to accomplish because you don’t want to just come across as an ornament and be in the background, but at the same time you don’t want to clutter the music with horns. And that’s something in every single song and every single performance I think about.

Sometimes I get it perfect and sometimes it’s just like, “OH, a little bit too much horn!” or, “Woah– you’re not like even there!” Playing with bands like Rubble Bucket I feel like it really taught me how to like make that balance a little bit better [and to]respect the minimalism. Because as a horn player it’s so tempting to just go and impress other horn players. 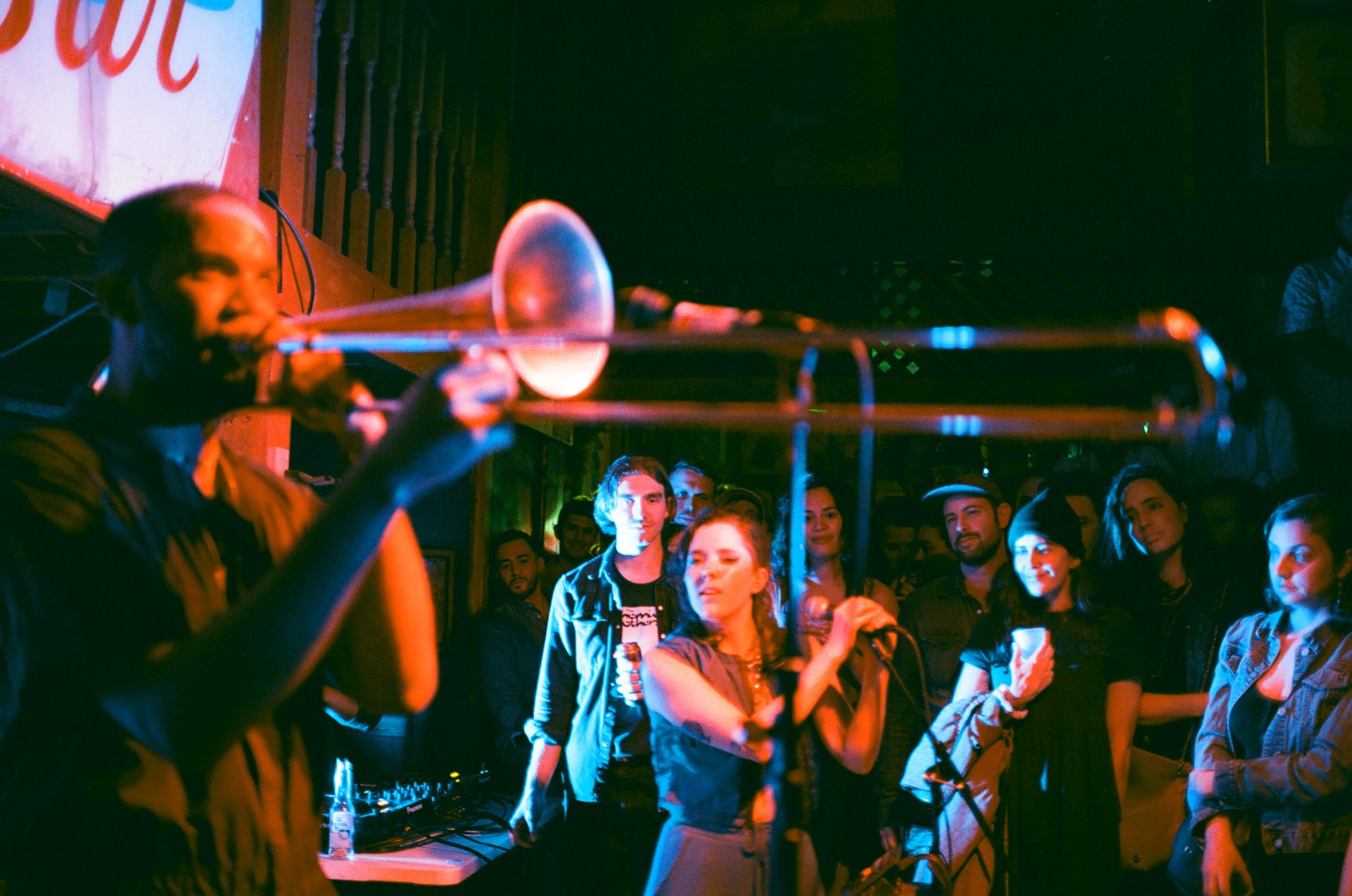 DB: I know in a lot of your bios that I’ve read there’s a phrase that keeps coming up about, “…looking for a sound that incorporated the feeling of New Orleans in a non-literal way.” I was wondering what that means to you?

CG: Yeah…that was me. [Laughing] Well, I mean Jeremy was raised here. I’ve lived here since 2014 and New Orleans, as you know, is huge on tourism and on like remembering the past. But there is a culture in New Orleans that’s happening with young people that is so interesting and so cool and I don’t think that it gets the respect that it deserves.

A lot of the time some people get praised over and over again– the same people over and over again– when young people are really innovating brass sounds and [other] sounds of the past and they’re taking it to the future. And so basically that’s what I was saying about what we are trying to do. We love New Orleans. We love what New Orleans has done, but we want to take it to the future. We want to just mix things up and make it fresh and new and young.

DB: Yeah, I think that’s really interesting. I think people see New Orleans music as like a monolith that you can’t touch, but every single generation there are people in this scene that are reinventing and remixing. It’s really cool to see y’all playing a part within this period.

CG: Yeah, and I don’t want to ever leave New Orleans, but I think New Orleans [artists] are like, “Yeah, I gotta’ go somewhere else to make this thing happen,” and we want this to happen here and now. Because I think you can live here as an artist [and] you can really thrive here. And I want people to stay around and I want amazing artists to come here because it only makes everybody else better.

People Museum’s new EP “I Made a Madman out Of Me and You Laughed” is available now wherever music is streaming and more information about Friday’s show can be found here. Keep up with the band via Facebook, Instagram, or Soundcloud.

NOFF 2019: In conversation with Angela Tucker, director of All Skinfolk, Ain’t Kinfolk
Artists