Do you worry about coastal erosion: Voices from The Listening Post

Editor’s Note(1): The following series “Big Easy and the Environment” is a week-long series curated by Lindsay Hardy as part of the Digital Research Internship Program in partnership with ViaNolaVie. The DRI Program is a Newcomb Institute technology initiative for undergraduate students combining technology skillsets, feminist leadership, and the digital humanities.

March is the beginning of spring in New Orleans, the trees are changing, the pollen is falling, and the humidity is just starting to creep in. As the seasons quickly change each year, and New Orleans becomes warmer, it makes people start to question: how quickly is New Orleans climate and environment changing?  This grouping of articles explores and appreciates New Orleans’ changing environment as it relates to film in the past, present, and future. “Do you worry about coastal erosion: Voices from The Listening Podcast” was originally published on The Listening Podcast on April 2nd, 2015, and was published on NolaVie on January 23rd, 2020. Through the podcast the show works to include voices from members of the New Orleans community and get their take on important topics. Through this specific episode readers are able to hear/read about the specific environmental change of coastal erosion, and how it affects New Orleans.

Editor’s Note(2): ViaNolaVie is working with the founder and producers of the The Listening Post. TLP is a community media project that aims to meet residents deep in their own neighborhoods, on porches, at libraries, in barbershops, and start conversations about local news in New Orleans and both get and share important information about life in the city.

Each week on their WWNO radio segment, TLP explores issues ranging from healthcare and WhoDat, to tattoos and transportation. Listeners are able to contribute via TLP recording devices at local libraries or via a text messaging service, which then became source material for these programs. This piece aired on April 2, 2015. 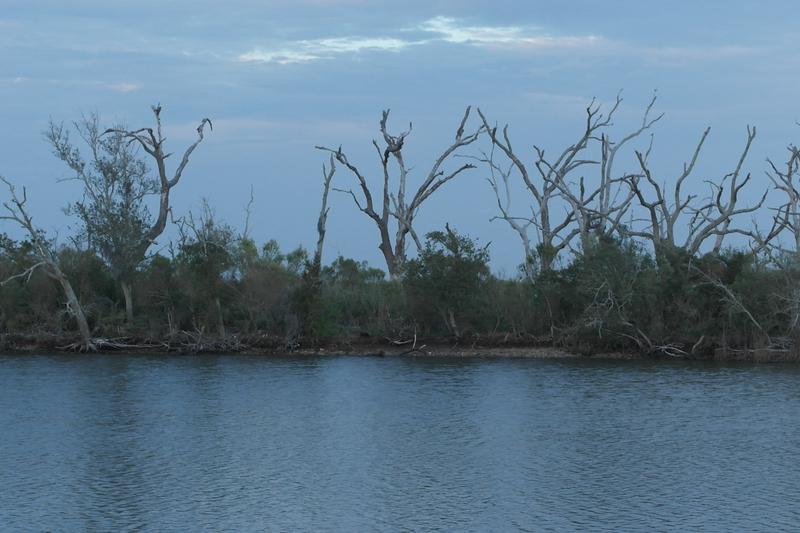 Saltwater intrusion has killed many cypress trees in the swamps of southeast Louisiana. (Photo provided by: The Listening Post)

WWNO’s Listening Post project asks questions about local news in New Orleans and the Gulf Coast and reports back on the community’s response. This week the Listening Post joins forces with WWNO’s Coastal Desk to present the Listening Coast. How do residents of southeast Louisiana feel about and plan for their uncertain future?

Louisiana’s land loss over the last 80 years is equivalent to the size of Delaware, and the potential of losing another Delaware looms large in the next 50 years if salt water intrusion, sea level rise and subsidence continue to eat away at Louisiana’s boot.

Terrebonne Parish resident Wendy Billiot knows the environmental score. She used to work in oil, and now runs a charter boat company. Her back yard is full of dying trees, compromised by saltwater. Her dock is getting farther and farther away from the banks of the bayou where she accesses her boat. That land is subsiding. 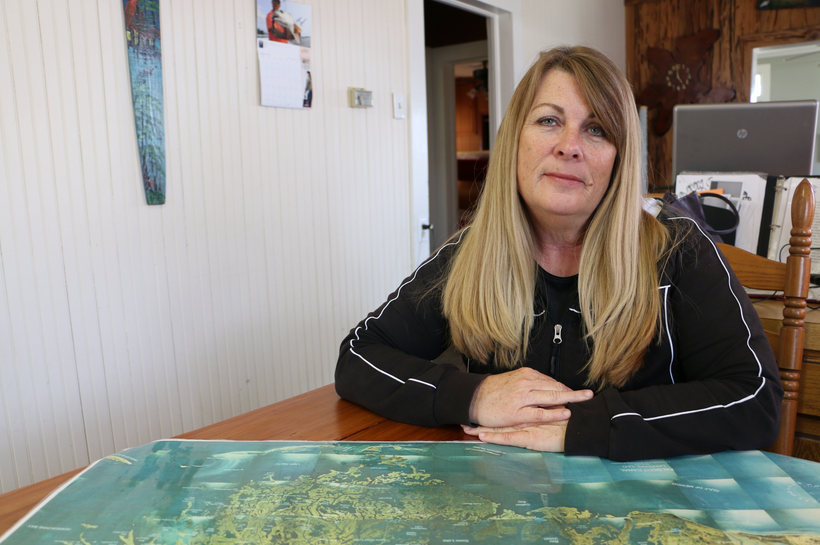 Terrebonne Parish resident Wendy Billiot is considering a move to Houma because she lives outside the levee system. (Photo by: Jesse Hardman)

And her house, where she raised her four kids, is outside the levee system currently being extended to protect some communities.

“If you live outside of that levee system, it weighs very heavily upon you to decide: when do I sell out and cut my losses?” she says.

Billiot says that as her kids move north to Houma to find work, she’s considering joining them. She loves her life and work as a charter captain on Bayou Dularge, but she’s trying to be realistic.

“What we have down here: our homes, our shrimp boats, oyster boats, and crabbing boats, our infrastructure does not meet the Army Corps of Engineers’ cost benefit ratio to be worth saving and protecting,” she says.

We wanted to get a sense of how these coastal issues are effecting other residents of southeast Louisiana. The #ListeningCoast teamed up with the Wetlands Youth Summit, which took place last month at the South Louisiana Wetlands Discovery Center in Houma, Louisiana. High school students interested in the challenges gulf coast communities are facing came together to learn from each other, and talk solutions.

We asked summit participants what they’re most concerned with, and whether or not they see themselves living on the coast later on down the road.

Here’s what people wrote in via text:

What’s the biggest environmental concern where you live?

-Trash in the bayou

Do you think you’ll stay living on the coast as an adult? Why/Why Not?

-Yes, because i grew up here and i enjoy living here.

-I should’ve been born in England.

-I hope so…I want to contribute to our culture, but land loss is a factor. Job opportunities will decline if land loss and emigration increases.

-Yes because I love it here and it’s my home.

-Yes, but on high ground.

-No; Personally, I want to target another audience in my field of work as a future cardiac surgeon.

-Yes because this is where I grew up and I love it. I wouldn’t want to live anywheres else.

-Perhaps. Depending how having a job as a biologist works out.

-Yes because my family is from here. I don’t think I’ll ever want to leave this culture.

-Yea because i’ve been here all my life and its all I know.

-No, because I’d like to experience life in different locations.

-Probably not depending on where I can receive a good paying job.

-Yes because I love living down the bayou and I don’t want to stop living here.

-I would like to, depends on whether or not it is feasible with flooding/ land loss.

One community is a step closer than most to leaving the coast. Isle de Jean Charlesis a tiny barrier island in the wetlands southeast of Houma. A small group of members of the Biloxi Chitimacha-Choctaw Indian tribe live there. But salt water intrusion has whittled their 5 mile wide strip of land down to just a quarter of a mile.

Chief Albert Naquin is trying to raise money to move his community to higher ground somewhere north of Houma.

“We’re trying to make a model community, where other communities that are facing what we’re facing will come and look at our community and see what we’ve done so they probably can do the same thing,” Naquin says. 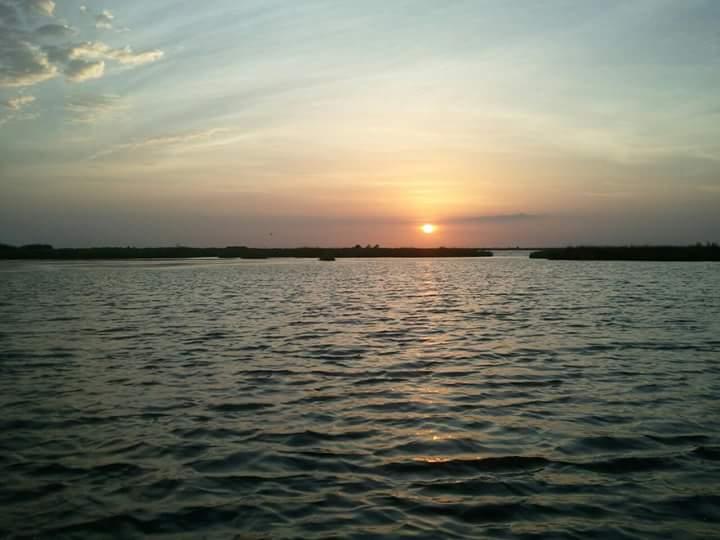 A coastal resident submitted this photo of a sunset over the bayou. (Photo provided by: The Listening Post)