Footprints: The four men at Gasa Gasa on Freret that I am setting free 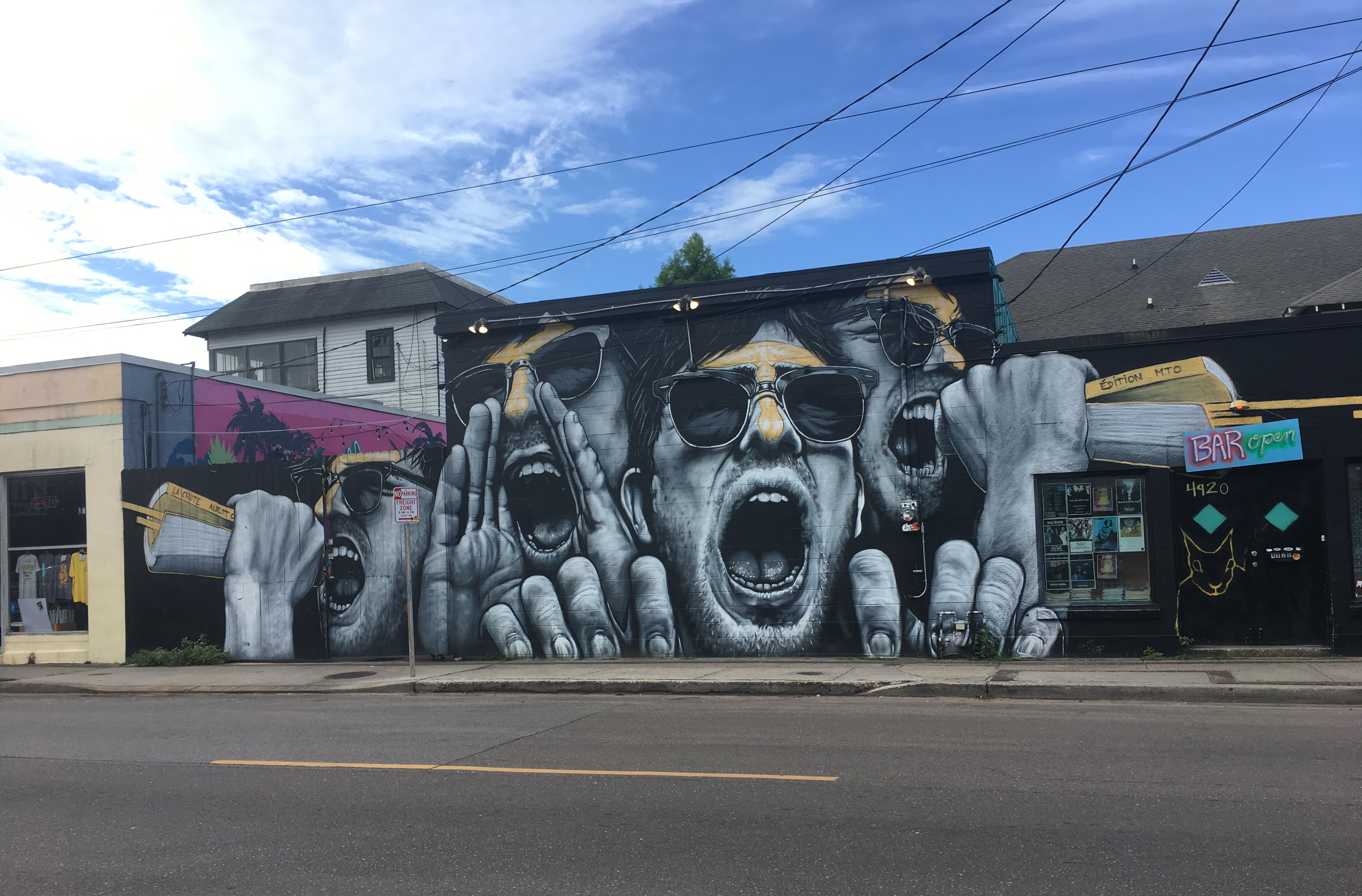 On Sunday, January 26, 2019, on the corner of Freret and Robert street, I observed four men, yelling out to those who walked past. These men were spray painted in style of a mural, on the walls of the upscale music venue, Gasa Gasa. This mural was named “Gasa Gasa in Nola,” and was created by Berlin-based graffiti and street artist, Mateo (MTO). When I first glanced at “Gasa Gasa in Nola”on a chilly Sunday afternoon, I was instantly drawn to the detail, and the selective choice to create the mural in mostly black and white. I believe that MTO did this so that viewers could focus on the image, rather than the colors. I also appreciated the use of hyperrealism to make the subjects appear life-like. The men in the photo look as though they are actually screaming at those who walk by. The choice to make them so realistic-looking, removes the barrier that exists between the art and the viewer, which allows them to connect with the men that they see in the image. I believe that MTO wanted people to see the true meaning behind the art, and to sympathize with the struggles and deep emotion expressed on the faces of  the men in the mural.

During my initial observation, I stood across the street from the mural in order to see it from a wide-angle perspective. The first thing I noticed were the angry expressions on the faces of the four men. They are wearing sunglasses, preventing viewers from seeing the look in their eyes. The open mouths and clenched fists of the men indicate that they are shouting. The men on the sides are screaming into books, perhaps mimicking a microphone, as Gasa Gasa is a music venue.  It seems that MTO strategically chose to create white men that appear to be acting out, in order to say something powerful about society and the culture that exists today. White men, especially in the South, have the reputation of acting with aggression and taking on an oppressive role. In the past, white males were slave owners that acted aggressively towards minority groups. Today, “57 percent of all sexual violence perpetrators are white and 99 percent are male.” 5 We also live in a society that is dominated by powerful males, such as President Donald Trump. Perhaps this is why MTO decided to create the men in his mural this way, to exploit the aggression of white males, in a society that is heavily focused on the actions of minorities.

In order to see more detail in the mural, I walked closer and I noticed the use of blending of the color yellow on the noses of the men, and the inclusion of small words on the books. The book on the right is inscribed with “Edition MTO.” I interpreted this as the artist’s signature. It is subdued and placed in the work rather than separate from it. I interpreted the placement of his name as MTO’s way of signing his work, and emphasizing the power of white men, while also hiding behind this power he holds as a white man in this day and age. 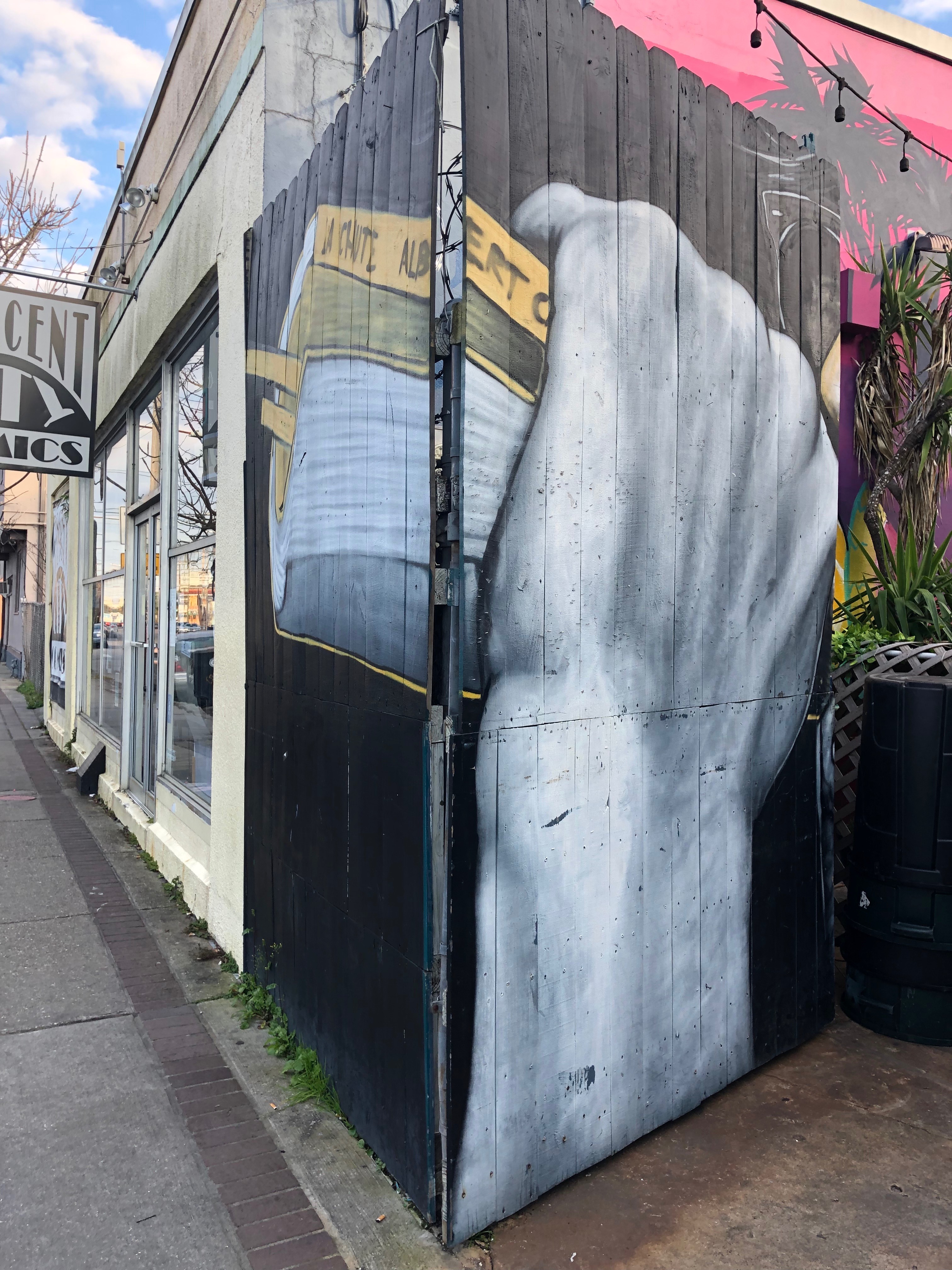 MTO inserts himself into his mural while also using his “street art” style to create this striking mural for the public to see. Street art is constantly changing over time and is hard to define.  The term first appeared in in 1975, when Robert Sommer used it to refer to wall paintings and mural art.1 While there is no singular definition that exists, it is often understood that, “Street Art consists of self-authorized pictures, characters, and forms created in or applied to surfaces in the urban space that intentionally seek communication with a larger circle of people.” 1 Street Art is controversial, as it can be seen as vandalism and destruction to property. Some people even think of it as an art crime. I, however, think that it adds beauty to ordinary things.

“Gasa Gasa in Nola,” is different in that the owner of Gasa Gasa sponsored the creation of the mural, commissioning the beautification of the external wall of his venue.  Since the mural was sponsored, it took away some of MTO’s creative freedom, and with it the “vandalism” tag that many associate with street art. Had MTO been given full creative integrity and painted on a random wall without the permission of anyone, perhaps he would have added more people, included more abstract elements, or incorporated more color like he does in some of his other pieces. Compared to his other work, this piece is not nearly as eye-catching or interesting. In many of his other pieces, he uses graffiti and more color to emphasize the art itself. Because he was creating a mural for Gasa Gasa, I believe he focused more on the message of the piece rather than the artistic elements.

There is a line in the film The Cave of Forgotten Dreams that came into my mind  as I viewed this mural. The narrator of the film says, “Looking at the paintings, what will they make of them?” Nothing is real. Nothing is certain.” 2  This line came to my mind, as I found myself asserting my own meaning to this painting. While I was able to infer some of the significance  based on the artistic elements, there was nothing included in the mural that made me certain that my interpretation was correct. Based on what I saw, however, I believe that MTO strategically created the men screaming out, to align with the meaning of the name “Gasa Gasa,” which translates to “rustling; dry or rough feeling.” 4

Furthermore, in the mural, MTO includes a book that says, “La Chute.” I soon learned that La Chute is a Philosophical novel called The Fall by Albert Camus. The novel is a story about  Jean-Baptiste Claim and his confessions to people at the bar. 3 The novel delves into the conflict of  “(modern) man- caught between the inner and outer worlds, between inner vision and the need to act.” 3   Similarly to how Jean-Baptiste Claim goes through internal conflict, it appears as though the men featured in the mural are trapped, yearning for something more because of the way that they are shouting out to viewers. The goal of Gasa Gasa is to be “rough in demanding the best from everyone involved in our events.” 4  The mural is essentially an artistic representation of the events in the novel, La Chute. The novel deals with the idea of crisis and the need for something more. The men in the mural appear to be angry, crying for help, and in need of saving. This is perhaps why MTO chose to include this novel.

A search of “Gasa Gasa” on Instagram and other social media platforms shows people posing in front of the mural for pictures, which makes MTO’s mural the representative face of Gasa Gasa.  The mural catches people’s attention so much that it becomes a visual locator for the music club. I wondered if this was why the owner sponsored MTO, rather than just having the outside wall painted with the Gasa Gasa logo. It seems as though it was a strategic marketing tactic. While I understand how MTO may have designed this mural to align with the goals and names of the venue,  perhaps he could have made the men look more excited, as music is commonly associated with euphoric feelings. Additionally, New Orleans is known for its parades, festivals, and music events. Millions of tourists visit the city each year to experience the unique culture. Other works of art in New Orleans feel more inviting and representative of the eclectic and lively scene of the city.

Taking the creative license that maybe MTO didn’t have due to his work being commissioned, I have a completely different vision of how this mural should look. Since New Orleans is a hub for music of all kinds, it would be effective to include not just well-known musicians from New Orleans, but musicians from all different backgrounds and genres.  The recognizable faces can attract more attention. Additionally, the musicians can appear passionate, excited, and invested in their music. This image that I envisioned for Gasa Gasa is more inviting and is clear that Gasa Gasa is a place to listen to good music. Additionally, I added in the phrase: “la musique est la liberté,” which is French for, “music is freedom.” I chose French because of MTO’s routes. Rather than trapped, I believe that the men in the mural should appear free.