Down the bayou: The mosquito bitten dream

Editor’s Note: Chad Burge took part in Richard Goodman’s Master of Fine Arts nonfiction writing workshop at the University of New Orleans, where the students take a kayak trip down a southeastern Louisiana bayou in order to observe the issues and conditions that make the bayous beautiful and precarious. Once they finish their full-day kayaking adventure, the students reflect and write, creating pieces that encapsulate their experience and give new awareness about the bayous. ViaNolaVie will be running these pieces as a continued series every week, and you can also read more student writing here and here. 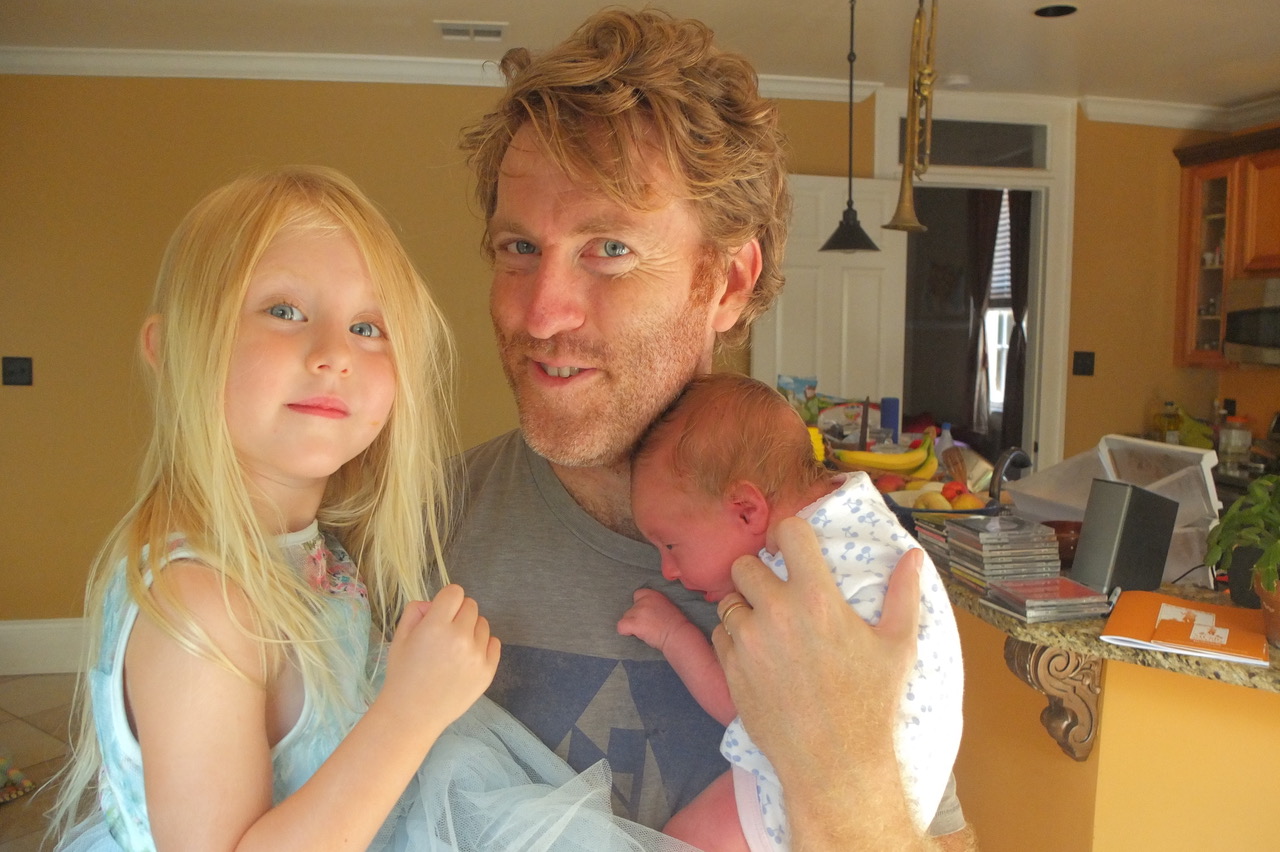 Chad Burge with his children. (Photo provided by: Chad Burge)

I wanted to smack my classmate Jackie’s back with my kayak paddle to clear it of the mass of mosquitoes that were sucking her blood. I’d have to ask before I could, and it felt like too odd a request, ‘might I smack your back,’ so I did nothing. We were at the tail end of our class’s kayak crew. She occasionally put down her paddle and scrambled her hands across her shoulders. Some of the mosquitoes flew off but quickly resettled and punctured another section of exposed flesh. The welts on her back looked like the marks of a lashing, not bug bites. I had my own mosquito problem, and watching her being devoured made me squirm. Jackie soldiered on through the swamp. At times she gave up on her paddle and grabbed onto the dense foliage on the sides of her boat to pull herself along. I continued trying to use my paddle, digging into the green tubular plants with hopes of hitting water and creating a resistant push forward, but really I was just scraping myself along too.

The trip to the bayou with my creative writing classmates had started out easy. We’d put our kayaks into a large open body of water that was right off the road. After passing two large pillars of concrete, the legs of an interstate bridge, the waterway had narrowed to the width of a two-lane highway. It was easy to navigate. Our guides had pointed out an old cypress tree and just past that a small crocodile that blended into the gray log it was on. Butterflies flew around the bayou, and there were bubblegum pink caterpillar-looking things on the stalks of big leafy plants that I pointed out to Jackie. She told me they weren’t actually caterpillars but apple snail eggs. I circled around, slowed down, and basically did whatever I wanted on the water.

That freedom to explore was something that I now missed as we slogged through the channel just wide enough for each kayak. Making it through took thought and planning. Keeping momentum was everything in this thickly entwined world of plants and mosquitoes. You needed speed to get past the floating logs, but if you got going too fast you’d end up on the butt of the kayak ahead of you, and then you’d have to force yourself to a complete stop before the boats collided. I’d tried lagging behind to avoid any full stops, but the waiting only invited more mosquitoes to attack.

My classmates and I were writers, and we were on this journey together. It never felt like anything but camaraderie, but that didn’t change the fact that we were being eaten alive because we’d put ourselves in this harsh environment. In the end, it was hard work that we had to do on our own. There was only one way out of this bayou now. It was too narrow to turn around.

I’d spent the last four years of my life focused on my writing and raising a kid with my wife Anne-Marie. A job waiting tables brought in some cash, but mostly I was banking on something happening with my writing to save me from being a complete loser. I could wait tables again. It was money. Money was getting more important than I’d ever imagined, especially after our second child had been born less than a month ago. It felt possible to let Anne-Marie be the breadwinner with one kid, but now with two it felt like the workload was being stacked too high against her for me to continue playing out a silly dream. But I was here in the bayou, with my classmates from grad school where I was getting an MFA in creative writing, and Anne-Marie still believed in that dream even when I couldn’t. I dug into the crud and careened my boat around a log.

There was hopeful talk between Jackie and I that maybe the way back would be a different route, though I think we both knew better. After about twenty more minutes in the tight channel the waterway opened back up. The bayou spilled into a lake where all the waters mixed together. It was here that my classmates and I relaxed and ate the peanut butter and jelly sandwiches that had been made for us.

I paddled out deeper into the lake and stopped near a cypress tree that looked dead. In this lake the water met the horizon, which made it look like the ocean to me, because I’ve always lived in mountainous regions where fresh bodies of water have a backdrop of hills and trees. It was calm out there in a way that was different for me. Most of my nature serenity had been found in the dark cover of woods. This felt vast, open, clean. The sun was coming and going from the behind the clouds and there was a whiff of salt to the air. It was warm out and the gentle rock of lake waves moved the kayak up and down like a fishing bobber. I looked around me before I settled back into a full recline on the boat. A few of the group were still at the initial waterway into the lake, and the others were off on their own little explorations. I lay back and closed my eyes. The up and down slap and lap of waves took me to a still place. I might have even dozed off for a second.

We stayed there a good amount of time but eventually one kayak headed back towards the others, and we all began to regroup without much instruction. Right before we took off a classmate flipped his kayak. Our professor stepped out of his boat to help him get the kayak right side up. A cell phone and shoe were lost in the process but nobody seemed that bothered.

And then the rain came. It was heavy, and when it hit the water mist rose from the splatters. The rain felt like our last gift before we departed back through the terribly tight trail we took in. Our guide praised the rain. “It will help keep the mosquitoes down.”

I wished it were true.

Chad Burge is a proud father of two wonderful girls, husband to an amazing woman and finds joy writing about all the things that lead him to his current life.

Really lovely piece, Chad. Sure makes me remember that afternoon!

Down the bayou: Monster in a Straitjacket
Creative Writing
We use cookies to ensure that we give you the best experience on our website. If you continue to use this site we will assume that you are happy with it.Ok