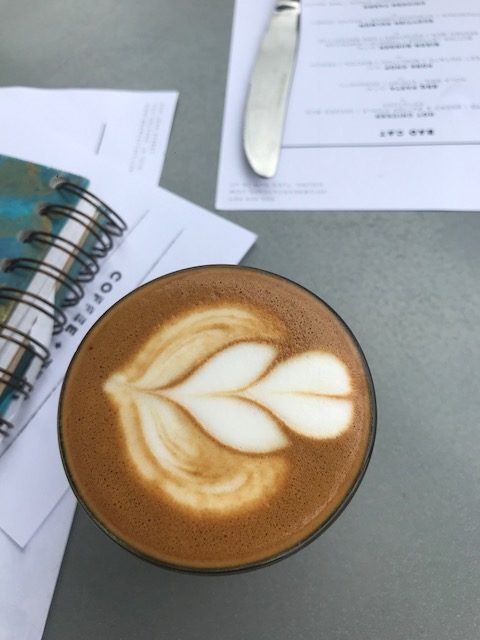 Free-trade coffee served with love marks may not translate to love for employees. (Photo: Renee Peck)

In New Orleans, coffee culture is an integral part of the breath of the city. Some even credit the city’s slower pace and laid-back attitude with creating the mid-morning coffee break. Whether that’s true or not, it is hard to deny that coffee is an integral part of the city’s atmosphere. Visit any of the Big Easy’s nearly 100 coffee shops and cafés and you’ll find a hub of activity: tourists looking for the traditional treat of coffee and beignets in the French Quarter, busy executives and employees in the Central Business District in for their morning pick-me-up, artists looking for inspiration in the afternoon, and of course, hospitality and service industry workers needing a jolt to get through their long day. New Orleans coffee shops are busier than ever.

Less Than a Living

Unfortunately, the profits those shops make don’t always translate to better salaries for the hardworking shop employees. In fact, many of the coffee shops around the city pay shockingly little. Though the state minimum wage is officially $7.25 per hour, several shops pay less. Rue de la Course starts their employees at $7.00 per hour. The popular PJ’s Coffee starts employees anywhere from minimum wage down to $5.00 per hour. And District Donuts starts baristas at $5.00 per hour. In a city where the estimated living wage for a single adult to remain above the poverty line is $11.40 per hour, these low starting wages seem almost criminal.

How It is Legal

But how do companies get away with paying below the state’s required minimum? The answer is simple: tips. All of the coffee shops mentioned above allow their employees to keep their tips, and they estimate that each employee will receive enough in tips to raise their income to or past the minimum wage. Unfortunately, very few patrons are aware of what the base salary of many of their baristas is and thereby do not know just how much the baristas are relying on their tips, and those that do tip, often tip very little. Even some etiquette experts recommend tipping only $1 per beverage, and only then if the order is complicated. If you’re a regular, a $5 tip per week is considered appropriate. Unfortunately, these paltry tips from the patrons who bother leave many baristas feeling the pinch when it’s time to pay the rent.

Fortunately, there are a number of bright spots around the city’s many coffee shops. One of the city’s more popular coffee stops for locals, Cherry Espresso (located in Uptown on Laurel St.), actively encourages tipping while still starting employees at $9 per hour (all while making a profit and maintaining a positive atmosphere for employees and customers alike). Stumptown Coffee Roasters on Carondolet in the CBD pays baristas $15 per hour and offers health insurance options as well. It’s no wonder you’ll find cheerful, motivated employees there any day of the week.

Of course, low pay isn’t the only issue that New Orleans baristas face. Like any service industry position, employees often face poor treatment from both customers and management. In one recent example, the very popular Pulp and Grind coffee shop on Camp Street was forced to close for an entire week when employees walked out en masse. According to one of the former employees, Megan Kosmoski, the walkout occurred when the owners fired the shop’s manager, LaShaun Crawford, going as far as calling police to escort her out of the shop. The employees felt that both the firing and police escort was unjustified, having witnessed Ms. Crawford build a community around the shop for the past three years in spite of increasingly poor treatment from the owners. In an email, Kosmoski stated:

“The abuses I have seen LaShaun suffer over the past year will not allow me to work at P&G any longer, nor will I patronize Satsuma or any other venues of the parent company.”

While it has been suggested that Ms. Crawford was interested in buying the shop, and may have engaged in inappropriate activity to do so, no evidence has been brought forth. We were unable to reach the owners for comment. Several of Pulp and Grind’s employees gave interviews in defense of Ms. Crawford’s character to a YouTube channel started to support her. You can view them here.

Coffee is an integral part of the day for most. Coffee shops provide everything from a leisurely morning break from the office, to a comfortable place to get some work done. They’re places we go to meet up with friends and to conduct business. In New Orleans, coffee is central to one of the treats the city is known for. So the next time you’re placing your morning coffee order, consider putting a touch more into the tip jar. Your baristas will bless you for it.

If you like Jenn’s writing, check out here piece from July’s edition on the connections between New Orleans and Puerto Rico.