Editor’s Note: We at ViaNolaVie know the importance of words and how powerful those words can be when they are spread. We strive to produce a space where equality and fairness can shine. We are reposting Chris Thomas King’s piece “The 2019 Grammy Awards ban African American Bluesman Chris Thomas King from ballot” in honor of his work, his voice, and his struggle that reaches many. This content was originally published with Big Easy Magazine, a publication dedicated to being a progressive voice for New Orleans and a soapbox for residents in every neighborhood. You can find this article and more content all about the Big Easy here. 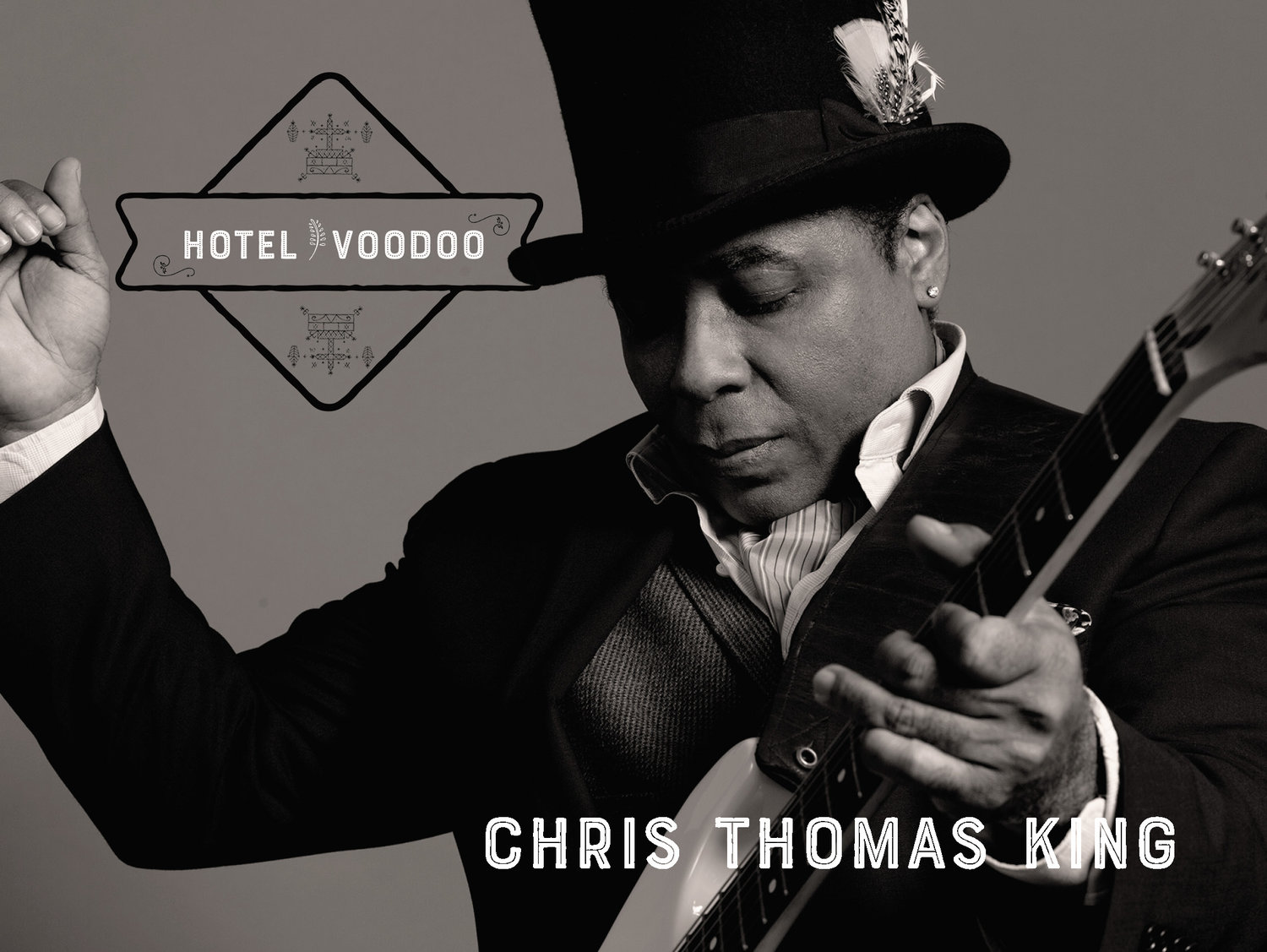 It’s official, the blues is no longer an African American music genre. I submitted my latest album “Hotel Voodoo” to the 2019 Grammy Awards for consideration for “Best Contemporary Blues Album.” But I learned from voters my name had been removed from all blues categories.

Indeed, as an African American blues guitarist who came of age in my father’s ramshackle juke joint, Tabby’s Blues Box and Heritage Hall, in Louisiana, and was the last twentieth century “folk-blues” artist to be discovered by a folklorist from the Smithsonian Institute in Washington D.C., I was told I no longer fit the Grammy’s criteria for blues.

This is not personal. It’s larger than me. It’s about the usurpation of my culture. My new album—which he admitted several times was outstanding but didn’t meet their notions of authenticity— featured my popular anthem “Les Bleus Was Born In Louisiana.” Apparently, a controversial artistic statement in blues circles. Clearly, the Grammy committee saw my music as an iconoclastic threat. Now, in 2018, African Americans can be banished from participating in their own musical culture.

It’s incredulous, the realization that I have been forced out of the blues to make room for Mick Jagger. Yes, that Mick Jagger, the billionaire Englishman, and his Rolling Stones. Indeed, Sir Mick Jagger and the Rolling Stones won the 2018 Best Traditional Blues Album Grammy last year for “Blue & Lonesome.” The Rolling Stones, and others like them, have returned to gentrify what’s left of our marginal music industry landscape. Proving, they won’t let us African American blues people have nice things.

It’s cultural appropriation at its most shameless, to have the “World’s Greatest Rock ‘n’ Roll Band” steal a Grammy nomination away from a more deserving African American blues artist. The 2019 Grammy Awards are continuing a racist trope in my opinion.

In 1964, for their debut album, the Rolling Stones recorded “I’m A King Bee” by Baton Rouge, Louisiana, trailblazing bluesman Slim Harpo. A few years later, in 1968, Mick Jagger, in his first in-depth Rolling Stone magazine interview said, “You could say that we did blues to turn people on, but why they should be turned on by us is unbelievably stupid. I mean what’s the point in listening to us doing ‘I’m A King Bee’ when you can listen to Slim Harpo doing it?”

The irony was, Sir Mick Jagger and Keith Richards’ new album sounded like their earlier albums, but their early albums were ostensibly rock and roll, not blues. However, we in the African American blues community always knew the appellation “rock and roll” was a veiled segregationist term meaning African American blues created by whites for whites.

In the mid-twentieth-century, rock and roll merchants and musicians seized the most lucrative aspects of the blues music landscape for themselves. They dominated commercial radio play, filled stadiums, and sold millions of records. Meanwhile, they left the African American blues community dive bars, honky-tonks and juke joints, like the one I grew up in, otherwise known as the “chitlin’ circuit.”

Mockingly, the Grammy organization nominated Mick Jagger and Keith Richards in the traditional blues category, allowing them to compete with elderly unsung black men and women who, most likely, can’t afford Obamacare, not to mention a pricey Rolling Stone concert ticket.

Indeed, last year’s Blues Grammy Awards was like a Roman vomitorium, where gluttonous billionaire rock stars flew in on their private jets, puked up lavish meals pilfered from the sweat and tears of bluesmen and women, to make room for the chitlins. This travesty reveals rock and roll’s dirty little secret. From its inception, it was a segregated musical sphere developed during the Jim Crow segregation era to usurp billions of dollars and prestige that would have otherwise gone to the African American blues community.

Today, the criteria for the blues is only a few degrees removed from blackface minstrelsy. For those unfamiliar with the hateful history of blackface—like poorly informed former NBC News personality Megyn Kelly—I will point to a dangerous new book published in 2017, The Original Blues: The Emergence of the Blues in African American Vaudeville by Lynn Abbott & Doug Seroff. A book which claims blackface performers originated the blues. The inference being, according to the Grammy’s pseudo-criteria, minstrelsy is the tradition I should be perpetuating to be on their ballot as a blues artist. I have written a book to counter such fallacies. I was recently featured on the cover of Living Blues, America’s premier blues magazine, dispelling such outdated racist fairy tales and superstitions about my culture. The Grammys have chosen to silence me. But I will not be silenced.

Today, the rock and roll record business is no longer the cash cow it once was. Both, aging rockers, and aspiring rockers covet our cultural space. Seems our humble chitlins are looking mighty good suddenly. What’s more, continued encroachment on the small niche once reserved for the African American blues community is a threat to our livelihood. A Grammy nomination helps the blues artist achieve belated recognition, but more importantly, better-paying gigs. Besides, there is an entirely separate award ceremony called the Latin Grammy Awards, so why can’t the Blues Grammy have an African American cultural bent?

Because I chose to speak up for my community and give voice to the gentrification of our musical and cultural landscape, the powers that be at the Grammys have decided to eliminate me from participating in my own culture. I will not boast about my talent nor my successes, nor my authenticity in this open letter, except to inform the casual observer that throughout my career I have been on the vanguard of blues; my body of work has largely defined the contemporary blues genre.

Moreover, I lobbied the Grammy Awards to create the Contemporary Blues award in the 1990s. I served for nearly a decade—at my own expense—as a member of the Blues Committee in Los Angeles. I resigned a few years ago in protest. There were knowledgeable and influential African Americans on various committees, with whom I had the pleasure of serving such as Randy Jackson and Mathew Knowles, Beyoncé’s father. Many African Americans have worked to protect the integrity of the Grammy process. But when it comes to the blues category, the African American aesthetic is all but ignored.

We blues people don’t have the megaphone to call attention to outdated racist tropes, stereotypes, and appropriation of our music and culture. We need intellectuals and those with strong voices and means—from all cultural backgrounds—to join us. The blues Grammys are in need of an “Oscars So White” reformation.

Finally, the blues Grammy Awards has become a farce. But worst, the blues, America’s greatest musical art form, is no longer welcoming to African American artists like me—the question is, does anyone really care. “First they came for the blues …”

Guitarist Chris Thomas King is a Grammy and Country Music Award-winning blues artist and actor, based in Prairieville, Louisiana. His latest album is titled “Hotel Voodoo.” His as yet unpublished book is titled “The Blues: The Authentic Narrative of my music and culture therewith.”