Editor’s Note: New Orleans is a city that is considered to be one of the top tourist destinations in the United States, receiving almost 20 million tourists a year. One of those reasons is the unique architectural styles found throughout the city, such as French influence and shotgun homes. Another is the unique style of city planning that began in Jackson square and follows the form of the Mississippi River. The history of the unique architectural styles is something New Orleans natives and those who visit should be informed on — everything from street tiles to not-so-tall buildings. This piece on I-10 was originally published on November 23 2021. 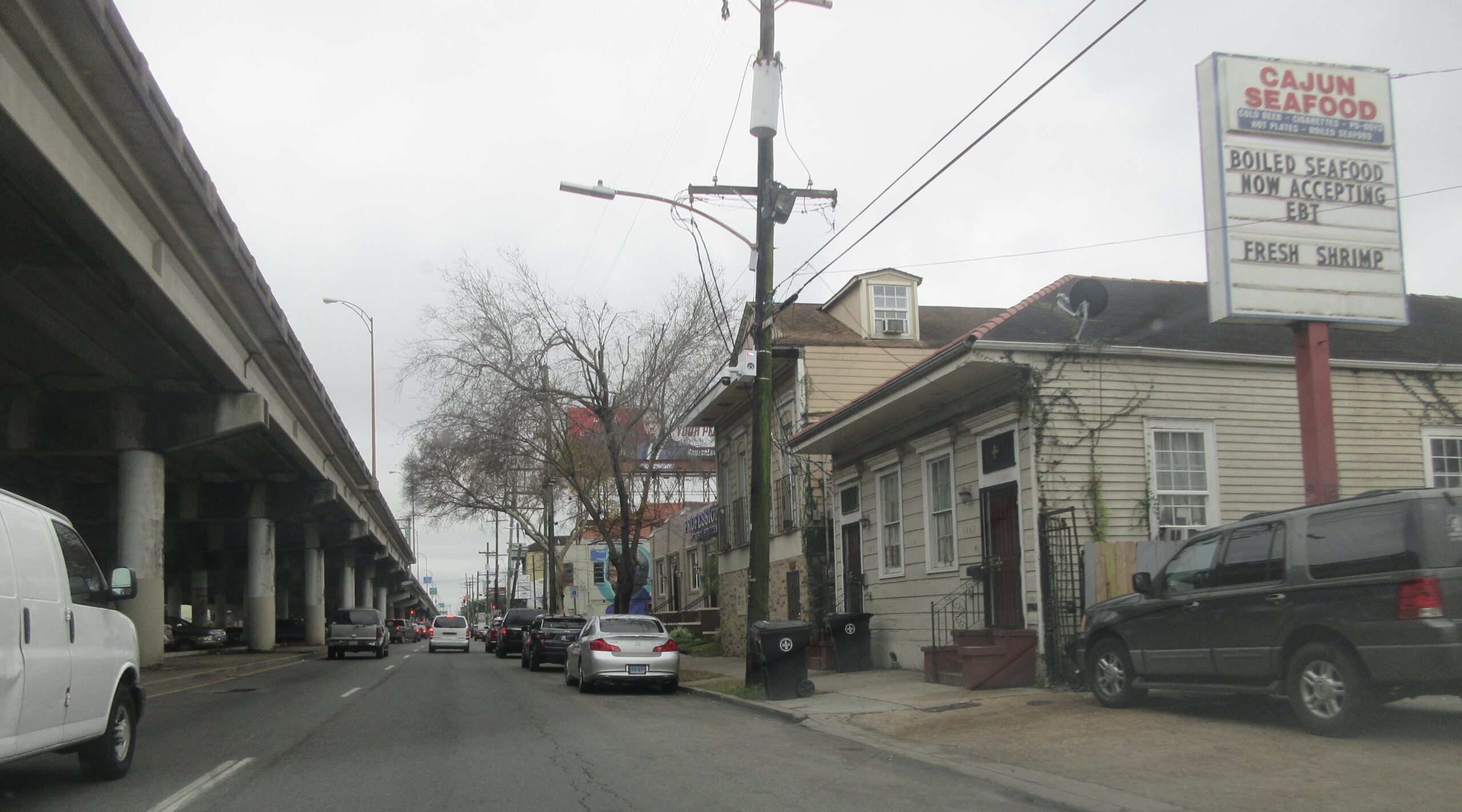 Claiborne Avenue next to I-10. (Photo by: Infrogmation of New Orleans).

Just the other day, Google Maps suggested I go on I-10 to get from Uptown to the Marigny. This route had the quickest estimated time of arrival, so I chose it and went on my way. After the dozens of stoplights on South Claiborne, the road slowly elevated as I merged onto the Pontchartrain Expressway, a local name for I-10.

By then, I was driving on a platform so tall that I could see the whole city up to and past the Mississippi River. However, the fast-moving traffic kept my eyes on the road in front of me. When I made it to exit 236B onto North Claiborne Ave, I had barely processed my brief time on the interstate. My way back, however, took much longer. At 6pm, I returned to a full and slow-moving I-10. As I inched along, I was able to watch a saturated pink and orange sunset engulf the city in all directions. From the top, the city was beautiful and sparkling. Even the Hard Rock Hotel wreckage took on a new beauty in this landscape. The only direction I couldn’t see was what was underneath me. 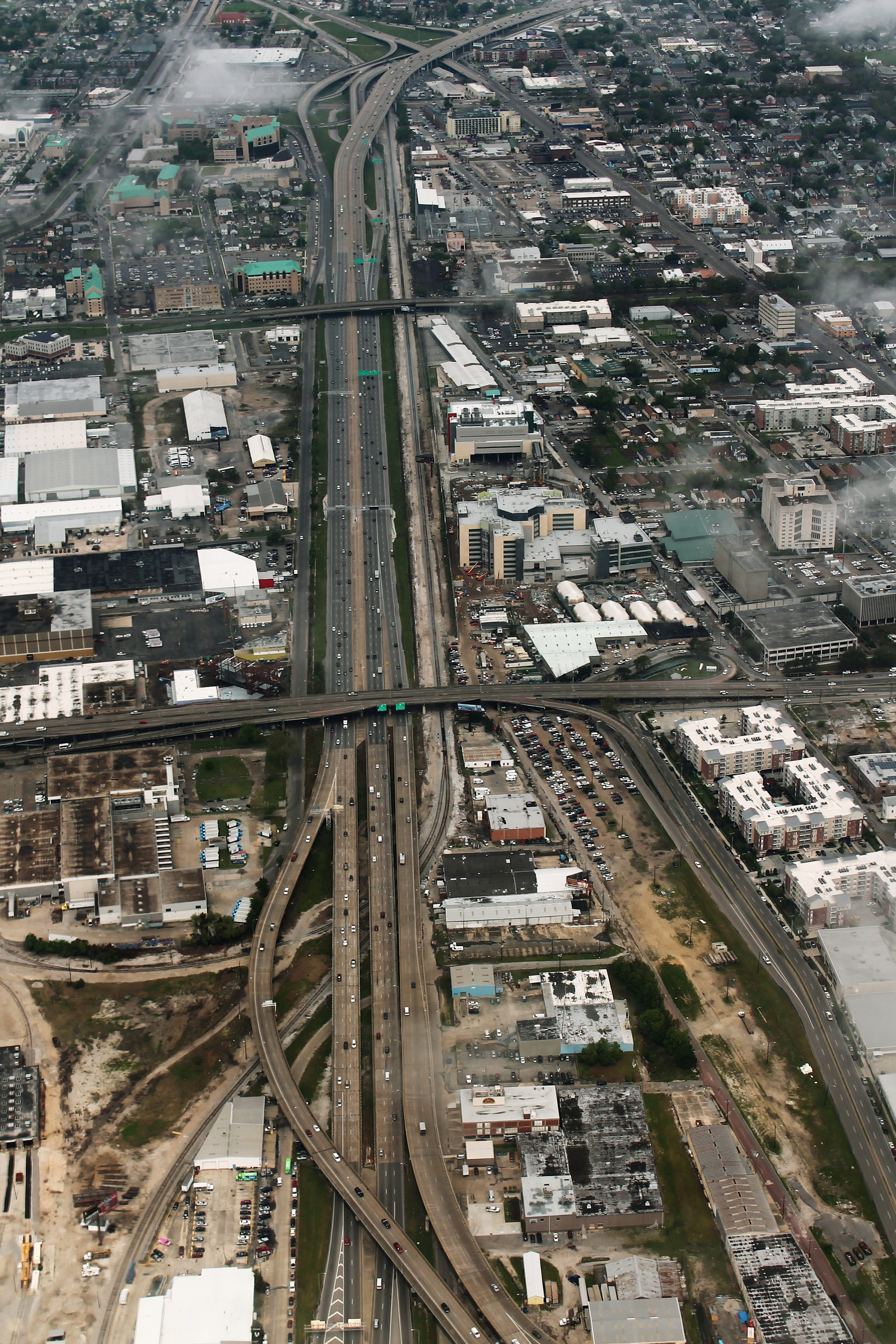 Ariel view of I-10 near the Claiborne Corridor. (Photo by: Wikimedia).

In the shadow of the dominating expressway lies the Claiborne Corridor. Separated by only a few blocks, the corridor, and I-10, run parallel to the grid of the French Quarter. Defined by its relationship with the interstate, or the “bridge” as many locals call it, the Claiborne Corridor is what remains of a sprawling Black neighborhood. Currently, the area surrounding the corridor is 62.7% Black. The six-lane expressway stands over what used to be the oak lined neutral ground of Claiborne Avenue. The grassy neutral ground was so wide that children would often play soccer or football there on the weekends or after school. In 1950, 123 businesses lined the streets of this neighborhood. Blocks away from the French Quarter, Treme, the neighborhood of the corridor, was the economic center for many Black New Orleanians:

“[…] even when Black New Orleanians could not join the police force, swim in public pools, or do their shopping alongside whites on Canal Street, Claiborne was an economic and cultural ecosystem that covered the needs of Black New Orleans.”

Local Dodie Smith-Simmons can’t overstate the importance of the Claiborne ecosystem for Black New Orleanians. For the Treme community, Claiborne Avenue was more than a street, it was “a place of pride and belonging.” So, when the city of New Orleans commissioned the I-10 freeway to be built through the main street of the neighborhood in the 1960s, it was essentially “an economic assassination.”

To build the expressway, the city acquired 155 private properties, displacing families and destroying local businesses. The construction was completed in 1972 and by 2000, there were only 44 businesses left in the area. Next City estimates that the construction project caused over 300 Black-owned businesses to close down. This targeted destruction was in part due to the legislation of the time that did not require community involvement in city planning. During the time of the I-10 proposal and construction, a select group of city planning officials had near full control over the destiny of the land. These officials desperately wanted freeways so that New Orleans could compete with the technological advances of other United States cities. For them, the auto industry was the route for New Orleans to assimilate with the rest of the U.S. and Europe.

In the years following World War II, the car industry was booming and many American cities were building freeways inspired by Germany’s autobahns. The New Orleans government wanted to join this trend and commissioned multiple freeways to be built throughout the city, including the Riverfront Expressway and the Pontchartrain Expressway. Both of these expressways were meant to connect into a complex I-10 system throughout the city, but the Riverfront Expressway was never completed. As Bill Borah, an attorney and native New Orleanian, believes, New Orleans so desperately wanted to assimilate to the rest of the United States that it risked losing its unique culture and communities:

Bill Borah and community members successfully stopped the plans for the Riverfront Expressway between Jackson Square and the Mississippi River. The Treme neighborhood, however, did not have the political sway to stop the Pontchartrain Expressway from decimating their community:

“Tremé was widely considered a slum by the mid-twentieth century, and while the community was opposed to the expressway’s construction, the voices of its disenfranchised residents were ignored and site clearing began in February 1966.”

At the time, there were few if any politicians that could represent the Black Treme community and explain how valuable Claiborne was in the local economy. So, just as the Civil Rights Movement made headway across the United States, the city of New Orleans was pouring concrete over Black economic centers.

“The very materials, masses of concrete and steel, make structures like the Claiborne Overpass seem inalterable. Their towering, unyielding presence is enough to refute even the possibility of change.”

Around and beneath this “monster,” there still exists a community, as fragmented as it is. In an attempt to reclaim their home, the Claiborne Corridor has become a center for Black Mardi Gras, music, and food stands: “the Claiborne community created a new world beneath the overpass, where the sounds of brass bands reverberated in testament to the bridge’s superlative acoustics,” says Devon. Local Entrepreneur Tyrone Henry opened Veggie NOLA in the underpass, offering juices, pre-packed meals, and snacks. Founder Gary Netter created Next To Eat in the neighborhood, selling healthy foods and kitchen services to other companies. The two founders have a shared dream to turn the corridor into “Backatown Plaza,” an area full of local entrepreneurial spirit and businesses.

As resident Asali Ecclesiates says, “we just take it back with our feet, with our music, with our art.” The very concrete pillars that hold up the massive freeway are now painted as beautiful oaks: “For as far as the eye can see, the concrete pillars that hold up the elevated interstate are painted with the images of oak trees. It’s like a grove of concrete trees,” says Ecclesiates. Despite the concrete attempt at assimilation on the part of the city government, the culture of the Claiborne Corridor seeps through.