Kids’ words take the stage with Goat in the Road Productions 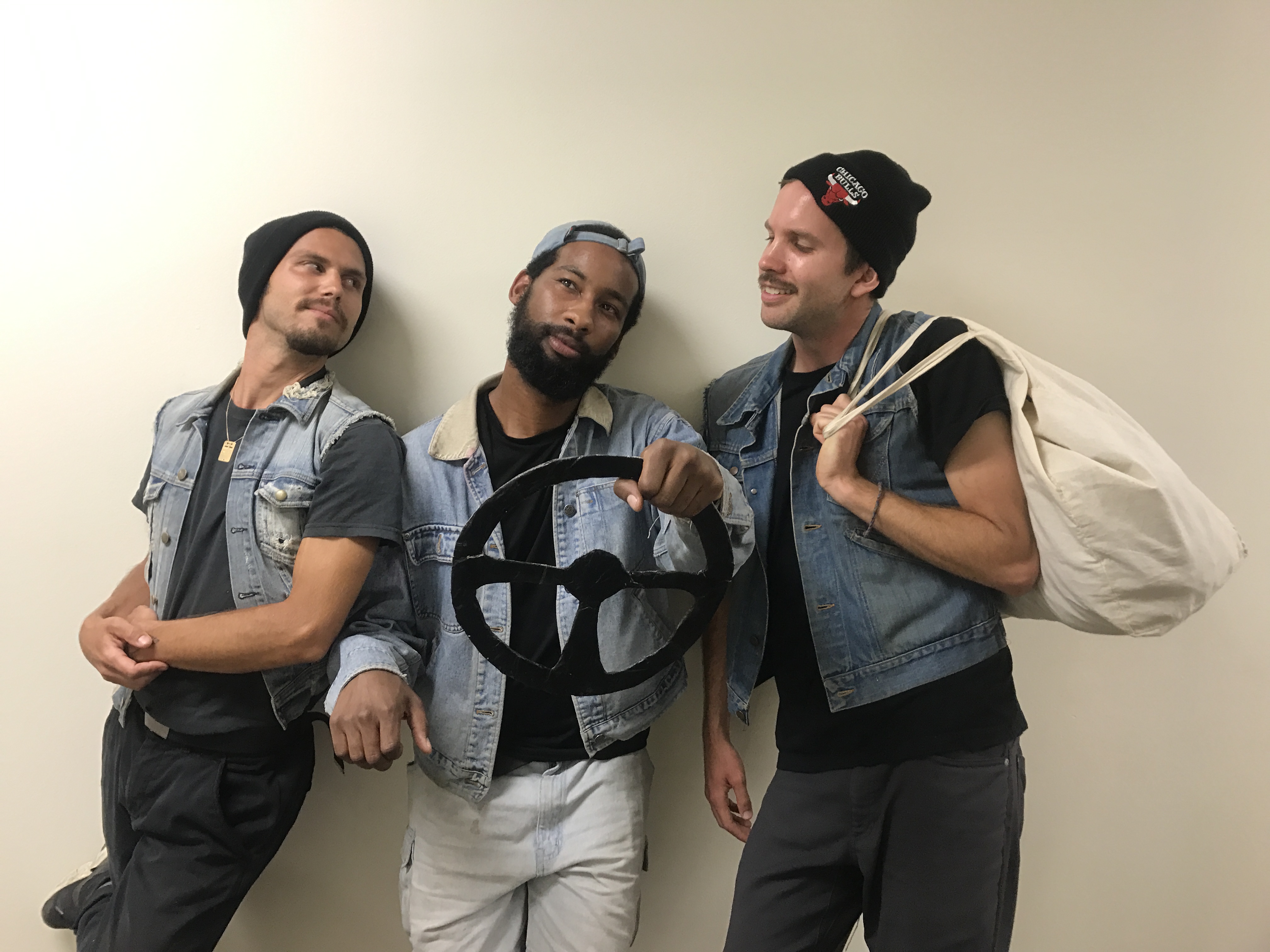 Everyday dramas in kids’ lives often revolve around minor conflicts, such as who ate the cookies, who gets grounded, and a dad who won’t stop sleeping on the couch, but their stories may also be peppered with disturbing aspects like zombies, car crashes, anarchy and police brutality. “The treehouse is where everything started…” Goat in the Road’s Ninth Annual “Play/Write” Showcase May 14th was the culmination of 20 weeks of intensive, creative, classroom work for 11 gifted, young playwrights.

Shannon Flaherty and Chris Kaminstein, Goat in the Road co-artistic directors, instructed 260 students at four schools–St. Mary’s Academy, Success Preparatory Academy, International School of Louisiana’s Uptown Campus and Young Audiences Charter School–in acting, improvisation and playwriting techniques. Students wrote a play every class, but just a few were chosen by a panel of artists and educators to be performed for the festival.

Monday night, each dramaturg sat in the limelight in an upholstered armchair to watch his or her original play unfold. Producing the works was equally challenging for six professional theater and dance companies. Although stage directions were sometimes written into the scripts, the actors applied their creativity to embellish the presentations.

“We were pretty excited by ‘Rednecks vs. Buffalo’ because the play, the form and the situation were strong,” says Grace Kennedy Woolford, an actor with Intramural Theater. Her offbeat company focuses on producing original scripts, using live music, dance, sculptural and visual arts to create an immersive experience. “Being exposed to a younger generation was a testimony to how anything can be theatricalized,” Kennedy says. 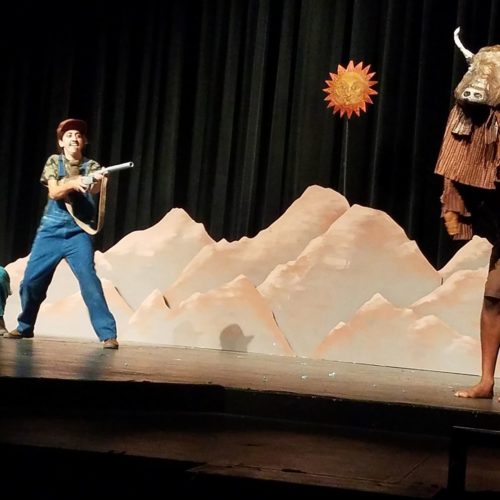 Scene from Rednecks versus Buffalos in Play/Write performance (photos by: Mary Rickard) 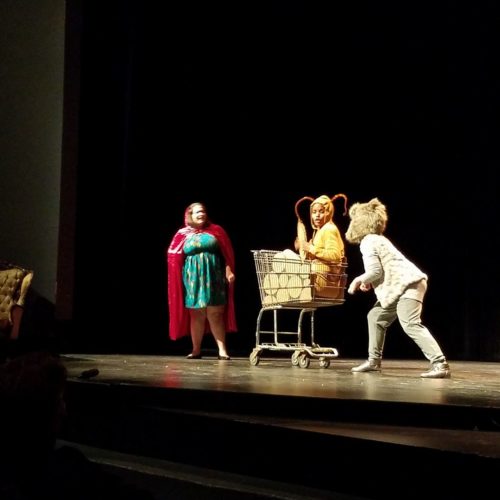 From the performance of Stolen Cookies (photos by: Mary Rickard) 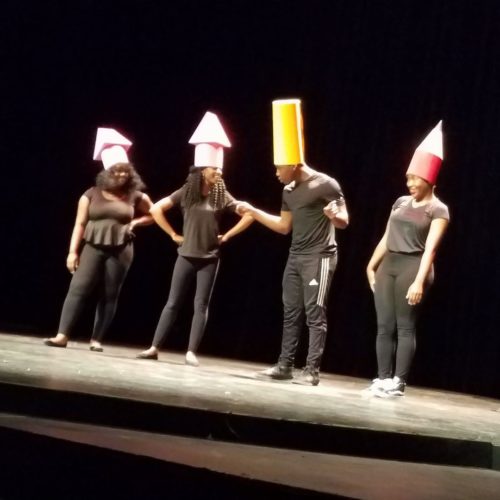 “Rednecks” playwright, Dylan, had already published several short stories in the International School of Louisiana’s literary magazine, so his school teacher Kyle Scott encouraged him to try his hand at playwrighting. The class was learning about the human impacts on the natural environment; Dylan was inspired by seeing an image of buffalo remains.

“It was way better than I imagined,” exclaimed twelve-year-old Dylan after seeing the production. “They made it feel alive!”

The fifth and six-graders learned how to create storylines through “See-Think-Wonder,” a routine that stimulates curiosity and inquiry through careful observations. Students might focus on a sound effect or visual image to think up the first lines of a play. Then, they must develop a conflict. “What does the main character want? What are the obstacles?” explains Flaherty. In Interrupted Movie, written by Tamico from Success Preparatory Academy, for example, the main character insistently begs her brother to fetch popcorn while watching a movie. When he refuses, she runs away and gets lost.

One of the playwriting exercises used the “Little Red Riding Hood” to inspire a 15-line play. That fairy tale was evident in The Stolen Cookies by Kamden from Young Audiences Charter School wherein, Louisiana style, a cockroach makes off with the cookies.

Three student plays incorporated songs by Michael Jackson, including “Thriller” and “Billie Jean,” specificed by Bryce, a Young Audiences Charter School student, for his nefarious play, The Government, also directed by Intramural Theater. “Michael Jackson has this staying power because his is the only music parents and children enjoying listening to together,” Kirschner said.

Youngsters are accustomed to quick changes of locations and timeframes in movies and video games, but those shifts don’t translate well to stage. Although transitions were not written into the scripts, Kirschner avoided using blackouts, keeping the plot’s momentum with theatrical devices.

One of the simpler, but more sophisticated plays, A Pencil and Eraser Story, featured a group of writing implements at risk of obsolescence. Directed by Ray Vrazel and played by Dillard Players Guild actors, the tools yearn to be bought and taken home. The pencil feels jubilant when he is purchased, but distraught after his head is sharpened!

The Cook Theatre audience was wildly enthusiastic about the performances, but the most important outcomes were that students had learned how to brainstorm ideas, craft interesting stories and work with a creative team.

You can learn more about the upcoming productions from Goat in the Road Productions on their website.