Speaking out for a patriotic Fourth, local actors read The Mueller Report 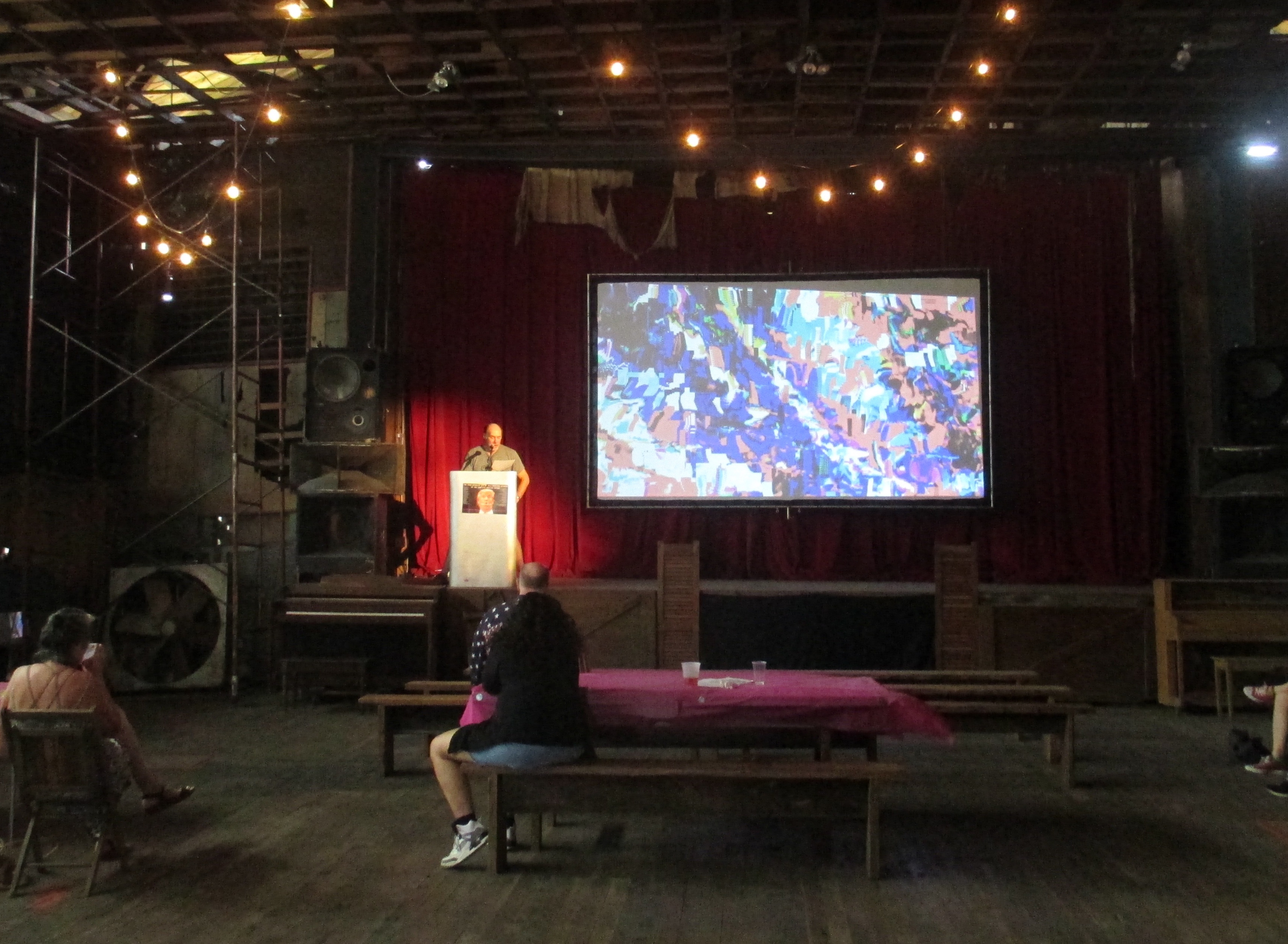 Crowds were modest for the patriotic entertainment of Impeachable You held on July 4.

While average Americans were firing up the barbecue on the Fourth of July, local thespians performed dramatic readings of the most perplexing legal document in contemporary America during a marathon reading of the Mueller Report, entitled Impeachable You. Starting at 6:00 AM, 50 performers were scheduled for 20-minute stints to tackle obtuse legalese, detailing Russian interference in the 2016 U.S. presidential election and charges of obstruction of justice by President Trump. The machinations of lawmakers, lawyers and handlers were unraveled for public entertainment, despite slim attendance in the uncomfortable, un-airconditioned playhouse.

Happyland Theater’s recitation was not the only dramatized reading focused on the demanding document. Hollywood celebrities staged a spellbinding, 77-minute play adapted by Pulitzer Prize and Tony Award-winning screenwriter and playwright Robert Schenkkan in New York. The Investigation: A Search for the Truth in Ten Acts, features an 18-member cast, including an outraged John Lithgow as Trump, a judicious Annette Bening and an unperturbed narrator Kevin Kline, which can be viewed in its entirety on YouTube, Facebook and other sites (#theinvestigation). New Orleans’ production was a page-by-page reading of the actual 448-page document that continued ’round the clock ’til 2:00 AM Friday.

Not much of a morning person, I arrived at the theater around page 80 as Carl Palmer, veteran Le Petit Theatre character actor, was describing George Popadopoulos’ meteoric ascent to power. After graduating from DePaul University in Chicago in 2009 and studying at University College in London, he did a four-year, unpaid internship at a conservative think tank; immediately afterwards, he landed a top position as a policy advisor for the Trump Campaign. (Popadopoulos had contacted Corey Lewandowski via LinkedIn who, after googling, decided he had the right credentials, offering him a plumb position as policy advisor.) A week later, Popadopoulas was inflight to Rome for a meeting with a Maltese named Joseph Mifsud who just happened to have Russian contacts, one of whom headed the social media campaign that interfered with the U.S. election. A few more days and a meeting with Olga Polonskaya and a meeting with Vladimir Putin was in the offing. Popadopoulas was terminated in October 2016, however. 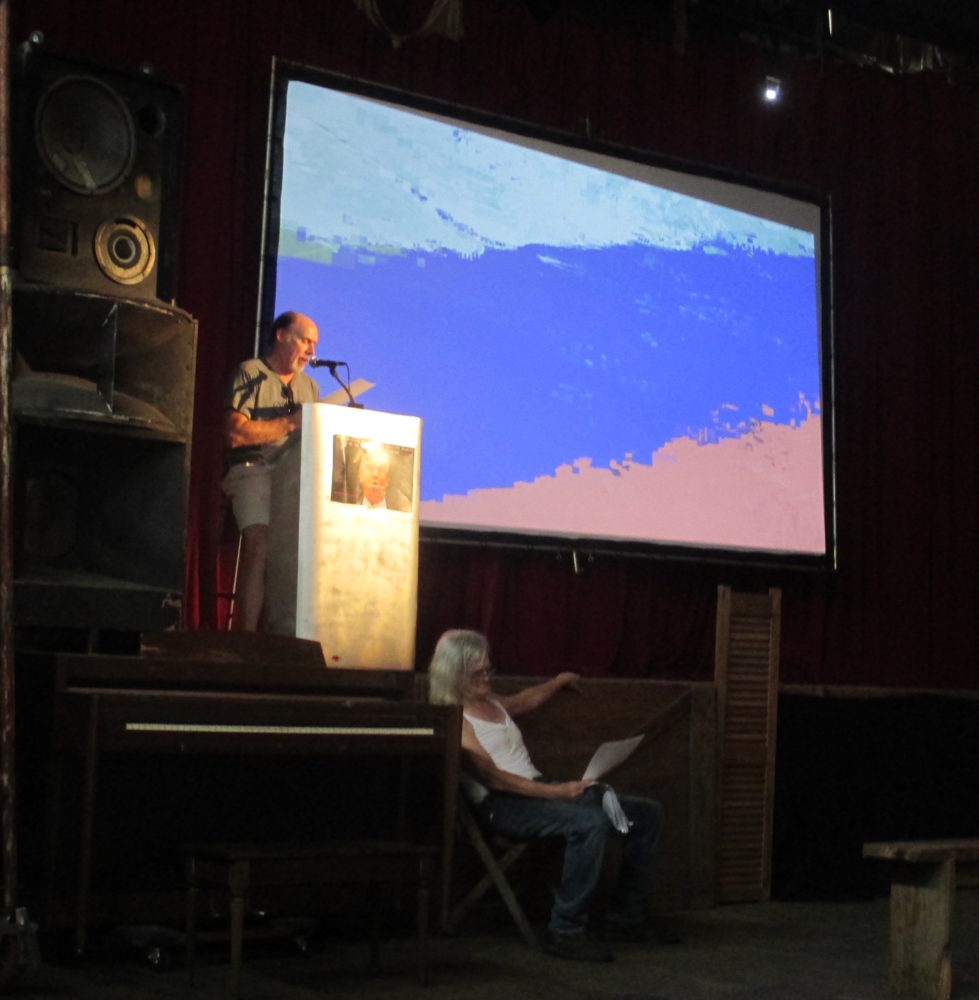 “What jumped out at me was the relentlessness of the Russians to contact the Trump team,” Palmer said after his stint. “Russians contacted the Trump team 140 times. It’s all there in the report, and you wonder what’s been redacted.”

New Orleans actress and photographer Kate Adair, who later read, reflected: “This is a massive document that the majority of us are only exposed to as memed information or clips, but I feel it is important for us to have an understanding of the immensity of the document and the care that was put into it.” Adair read the juicy parts about Donald Trump Jr.’s meetings with Russians regarding dirt on Hillary Clinton:

“According to Akhmetshin, Trump Jr. asked follow-up questions about how the alleged payments could be tied specifically to the Clinton Campaign, but Veselnitskaya indicated that she could not trace the money once it entered the United States… Kaveladze similarly recalled that Trump Jr. asked what they have on Clinton, and Kushner became aggravated and asked ‘[what]hat are we doing here?'”

Sunshine Martinez took the microphone, following the investigative trail, and read about Carter Page’s nine-month’s work on the Trump Campaign. Page was deputy branch manager for Merrill Lynch in Moscow, executing transactions involving the Russian energy company, Gazprom, when he sent an email to senior Campaign officials, stating he’d “spent the past week in Europe and ha[d] been in discussions with some individuals with close ties to the Kremlin” who recognized that Trump could have a ‘game-changing effect…in bringing the end of the new Cold War.'”

Six months later, Page made two speeches in Moscow, criticizing the U.S. government’s foreign policy toward Russia and its “often hypocritical focus on ideas such as democratization, inequality, corruption and regime change.”  A Trump Campaign spokesperson later denied any relationship with Page, claiming the Campaign was “not aware of any of his activities, past or present.” Page was also soon terminated.

Is this report starting to resemble a Peter Sellers’ movie with actors wearing raincoats and fake mustaches?

Dressed in a red, white and blue flag shirt, theater director Harold Gervais stepped up to the mic, continuing where Sunshine left off. He focused on CNI, the Center for the National Interest, a think tank with expertise in and connections to the Russian government. On March 31, 2016, Dimitri Simes, president and CEO of CNI, had a one-on-one meeting in Kushner’s New York office at which time Simes suggested a meeting with candidate Trump might help develop his foreign policy approach.

Key issues were outlined, including “a new beginning with Russia.” 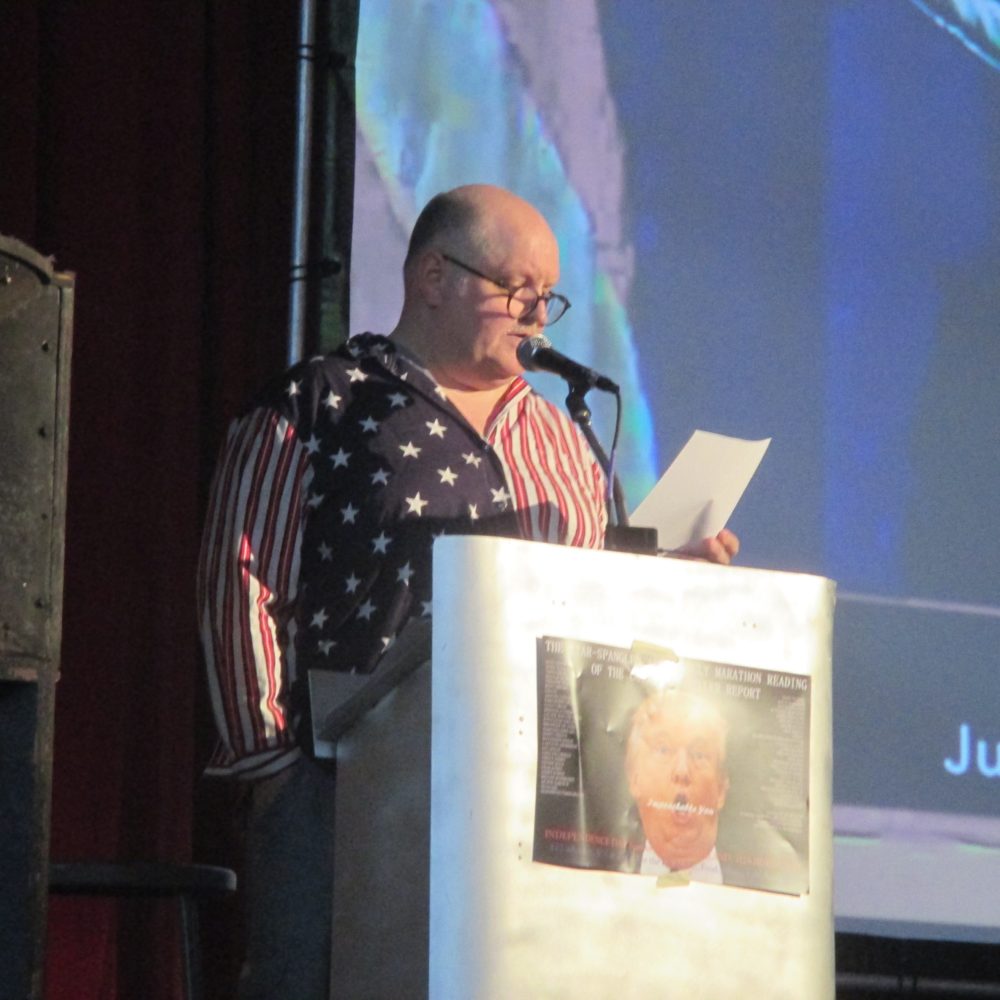 Harold Gervais: “I am going to read to you about a bunch of traitors.

A VIP reception ensued — held at the Mayflower Hotel where invitees, including Cimes and Russian diplomat Sergey Kislyac, would create an opportunity to be introduced to Donald Trump. (No one who attended the event could remember meeting or speaking to anyone else.)

Following his reading, Gervais shared his belief that public readings of the Mueller Report are vital because 83% of Fox-TV viewers believe the Special Council’s investigation completely exonerated Trump. “They were going to launch impeachment proceedings against Nixon for less,” he noted.

Fox news has been able to wrest control over American viewers, Gervais said, because of the loss of the Fairness Doctrine (an FCC policy that required broadcasters to present controversial issues of public importance in an honest, equitable, and balanced way. The law was repealed in 1987 under Ronald Reagan.)

Taking a trip to the ladies and visiting the cocktail bar, I missed several pages, detailing multiple meetings and correspondences with various Russians named Sergei or Dimitri.

“On June 9, 2016, senior representatives of the Trump Campaign met in Trump Tower with a Russian attorney expecting to receive derogatory information about Hillary Clinton from the Russian government. The meeting was proposed to Donald Trump Jr. in an email from Robert Goldstone, at the request of his then-client Emin Agalarov, the son of Russian real-estate developer Aras Agalarov. Goldstone relayed to Trump Jr. that the ‘Crown prosecutor of Russia … offered to provide the Trump Campaign with some official documents and information that would incriminate Hillary and her dealings with Russia as ‘part of Russia and its government’s support for Mr. Trump.’“

Then there was the notorious part where Trump Jr. emails: “If it’s what you say I love it.”

Written answers submitted by President Trump, claim he has no recollection of knowing about the meeting at the time, and the Office found no documentary evidence showing that he was made aware of the meeting–or its Russian connection–before it occurred.

Despite small attendance, Adair felt, “When people come together and shine a light, even if it looks really small, every action helps.”

The script for “The Investigation” is available for downloading free from Lawworksaction.org. Come on, theater groups, do it. Heck, I’d even read a part.