Balloonacy is popping up at The Lighthouse Building 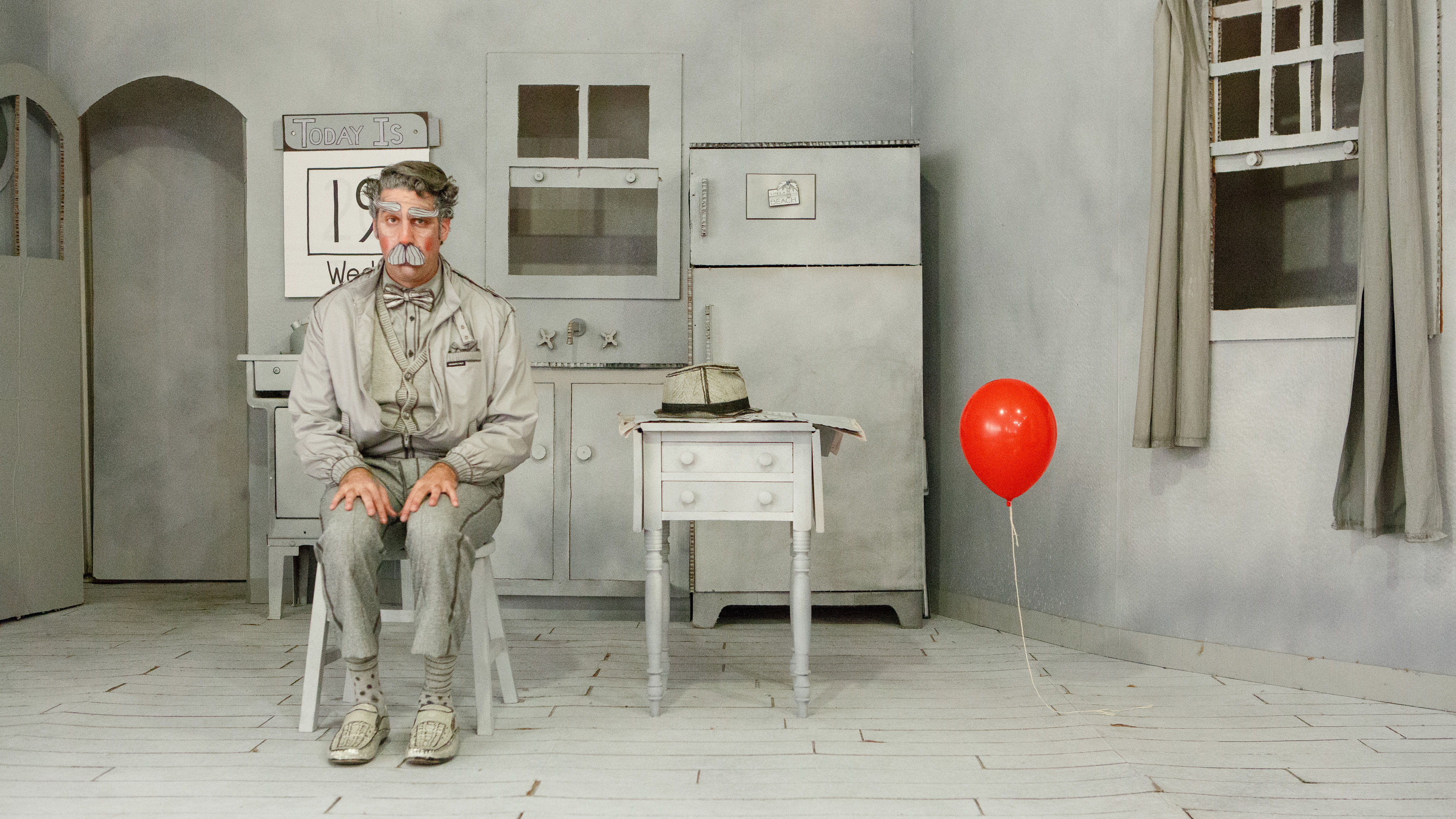 Watching Balloonacy, a children’s play produced by the Radical Buffoons in The Lighthouse Building, I was reminded of the 1920s silent film star Buster Keaton, the subject of a recent documentary film. Keaton proved dialogue is completely unnecessary in making people laugh. Like Keaton, Buffoon actor Jon Greene’s poker face leaves audiences wondering what he is feeling and what is bound to happen. Children are particularly stimulated by pantomime and imagining the outcome.

In Balloonacy, written by Barry Kornhauser and directed by Darci Fulcher, Greene essentially puts on a one-man show – one man, that is, without counting the character of a frisky red balloon that does almost as much onstage as the actor. The play focuses on a lonely curmudgeon whose only activity is reading the newspaper. His drab existence is reflected in a monotone apartment with appliances, clothing and, of course, newspaper devoid of color. The story opens on his birthday with the delivery of a greeting card from a secret friend.

Soon, a party balloon appears at his window, attempting to sneak inside. But its arrival is an annoyance and disturbance in the man’s stodgy life, so he tries unsuccessfully to get rid of it. (Backstage manager Hannah Pepper-Cunningham is kept busy behind the scenes, poking the balloon into cabinets, through windows and popping up at the doorway at various levels of helium, seemingly indicating its mood.)

Like the coconut in the movie Cast Away, which becomes the imaginary friend of a lonely plane crash survivor, the balloon assumes a personality. Over the course of an hour, it teases, nuzzles, hides and quarrels with its human friend.

As in silent films, music accompanies and accentuates the action. Keyboardist Brian Coogan follows Green’s every move and also uses drum, snare and harmonica to illustrate the relationship dynamics. Audience members can lie on a mat at the foot of the stage to participate and shout out advice.

Kornhauser originally developed Balloonacy for children, ages 2-5 years old for the Children’s Theatre Company, which received funding from the Bush Foundation for early child development. “One of the many things made abundantly clear in that process was that early learners come into contact with reality less on a linguistic-discourse basis than on a bodily-sensory one,” Kornhauser said. In addition, “without dialogue, the play becomes accessible to children who, for one reason or another, might be facing language barriers beyond those of the developmental sort. These would include refugee or immigrant youngsers with limited English skills or even kids who are deaf.”

Balloonacy is entertaining to children and adults, with valuable lessons about loyalty and friendship to take home.

The play continues daily at 10:00 AM and 2:00 PM through December 30th at The Lighthouse Building (743 Camp St. between Girod and Julia). Tickets and information are available at radicalbuffoons.com.