Ayahuasca is a psychoactive drink that is made by boiling leaves of the Psychotria viridis shrub with Banisteriopsis caapi vines that are native to South American countries. The psychedelic part of the substance is referred to as DMT, classified as an illegal Schedule I controlled substance, and “induces vivid hallucinations”. While the drug has been used in its originating countries for hundreds of years, more Americans have been participating in ceremonies in the past few decades. Many of them fly to countries like Peru or Costa Rica for the experience, and some retreats have opened in America in the past few years. Media exposure brought from celebrities like Lindsay Lohan has increased interest in it, and television programs like “Nine Perfect Strangers”, a show where a group of people go on a retreat to have their minds altered and perspectives on life changed, showcase society’s growing obsession with psychedelics. 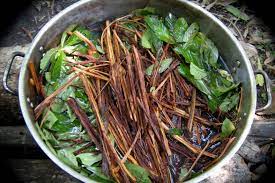 An ayahuasca ceremony, often taking place over the course of a week, first puts visitors into a state of comfort by pampering them with spa treatments, yoga classes, and healthy food. This is to prepare the body and mind for the emotionally taxing experience to come at night after drinking the thick, potent liquid. An opportunity in Costa Rica called Behold Retreats boasts that, “you will feel like you’re living on a cloud during this transformational wellness retreat.” For a mere $6,500 guests are invited to indulge in sharing circles, private consultations, sweat lodges, and more. After going through the luxurious parts of the experience, it comes time to set intentions for using the drug. This serves as an anchor which is needed because “many of us are confronted with parts of our own subconscious and can end up in some unknown and dark places. If you can put the effort in to remember your intention, to remember what brought you to explore or heal in the first place, that remembrance can recenter you.” Such intentions include, “what do I want to learn about myself?”, or “why did I end up in the place I am?.” Coming back to these queries helps participants stop themselves from mentally spinning out of control. According to one user, Sean Illing, despite trying to set oneself up for success, going into the first night is often the hardest because of the adjustment of what you thought was going to happen versus what actually does. He realized that trying to fight the medicine was useless, and only served to create a mental struggle that stemmed from trying to think his way out of the experience, leaving him without any meaningful takeaway. For those stuck in their own heads or in need of guidance, the presence of the shaman, or leader, is essential. They help to soothe discomforts by checking in on participants and recentering their thoughts through chants or physical touch. 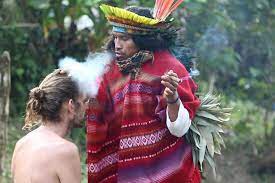 A shaman taking part in an ayahuasca ceremony

There are multiple shamans present at ceremonies, and while there are no precise measurements behind the ratio, the exact number of leaders depends on the size of the group of people taking the drug. Some shamans are native to their countries, but there are no physical characteristics or backgrounds that must be met to hold the position. Nora Dunn served as a shaman’s apprentice in Peru, helping with voice chants called icaros which can be sung in many languages like Spanish and Quechua. About the service she offered during ceremonies she said, “sometimes it was a matter of answering questions, providing assistance, doing bodywork, or simply offering a much-needed hug.”  She explained that the process of training was frustrating because it did not entail as much textbook learning as it required intuition and natural wisdom. These skills were then passed onto participants during their time on the drug. One user said he was asked by his shaman during a moment of panic, “‘Are you all right?’” and responded, “‘Yes’… and to my surprise I realized that I was all right”. They act as a voice of reason and point of contact with the regular world at a time when it seems impossible to connect to a normal headspace. Their responsibilities include dealing with strong emotional and physical reactions without being in the mind of the person experiencing such feelings, as they are referred to as “healers, diviners, and custodians of religious mythology”. They must be equipped to deal with many types of trauma and be held accountable for human lives and sanity.

Something that many users experience is a reflection on how the people they’re close to have shaped their current way of being. Transcending the typical state of being often results in anger as users lash out in physical or mental ways that they themselves don’t understand until the drug shows them the life experiences that led to such reactions. This is because “individuals transcend their primary identification with their bodies and experience ego-free states”. One user, Noah Kagan, described how he ran from the retreat as his visions took over his mind, and left all of the resources that were provided at the site. Upon his return, he thought of his dad and how “…he’s not here to love me so I have to love myself. And I am not loving myself. I am running away from things.” The realization of this fear put his everyday actions into perspective and showed him how they have hurt other people who were trying to reach out. The reaction to a traumatic event often causes people to shut out others to avoid a repetition of that pain. However, the freedom ayahuasca offers of being in an ego-free state allows users to see situations objectively and learn how to look past being damaged and get on the path to being healed.

With drugs like alcohol or opioids, after the experience is over the user must deal with the fallout of what they have done or thought in their altered state like performing violent behaviors or emotional outbursts. Ayahuasca differs because many people leave with a sense of clarity or purpose instead of regret. Their challenge is then to apply what they have learned to real life. This is easier said than done, and one large reason is because the majority of society will not be on the same page as a person who has just ingested a mind-altering substance. Illing said about encountering a stranger, “I looked at him until he looked back, assuming I’d strike up a conversation. But once we locked eyes, I could sense his agitation and we both turned our heads…”.

Finding inner peace is not always easily translated to others, because changing one’s demeanor all at once feels unnatural and no matter what the shift is, it is coupled with judgment from others. The common theme among most ayahuasca users is that while experiencing the most painful memories of one’s life in a week long timespan is emotionally taxing, it is equally freeing and educational.