Punishment and redemption: Mental illness in the prison industrial complex

In state prison, over half of the inmates have an indicator of a mental health issue. However, about one-fourth of the prison population have actually been offered professional aid since admission. Prisons are suffering from a lack of doctors and nurses, which lead them to hire under-qualified doctors, who cannot provide the proper care to those who need it. The Marshall Project reports that a lot of inmates refuse treatment and do not reach out for help as they do not trust prison staff. This was particularly bad during the COVID-19 pandemic as inmates hid symptoms of their illness, allowing it to spread. 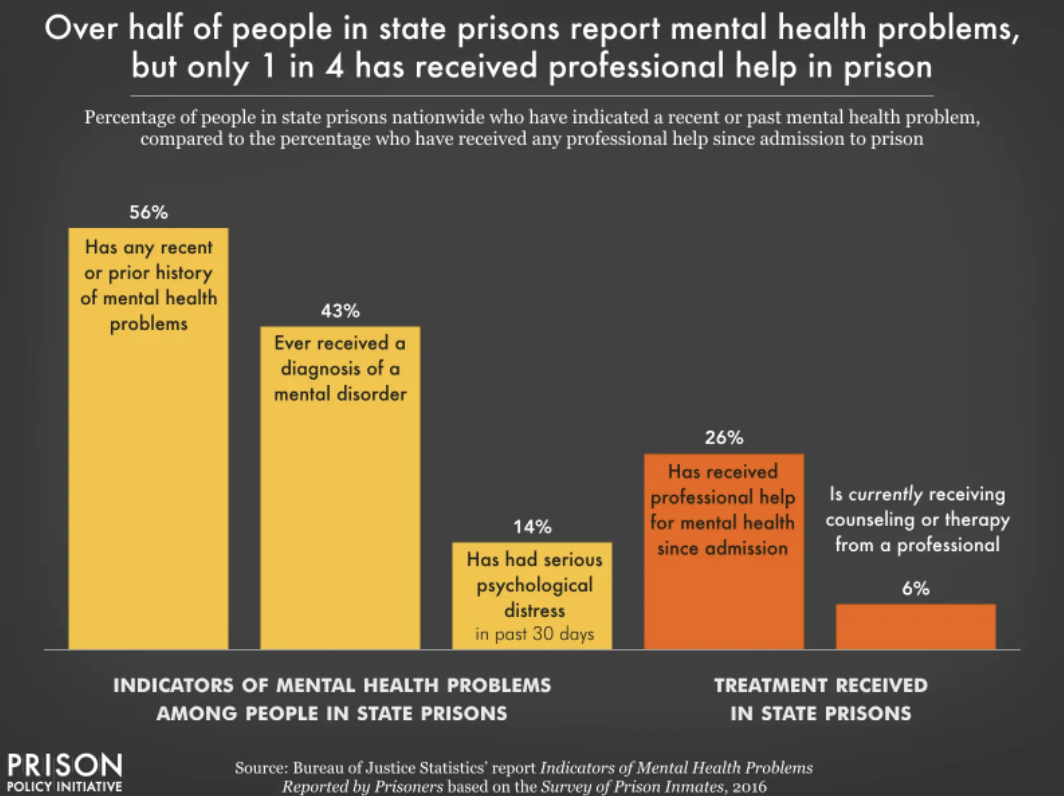 Source: Bureau of Justice Statistics’ report Indicators of Mental Health Problems Reported by Prisoners based on the Survey of Prison Inmates, 2016

An inmate’s mental health is affected by the conditions in prison including prison overcrowding, solitary confinement, and trauma from experiencing and witnessing violence in the prison setting. Prison overcrowding is one of the biggest problems the prison industrial complex is facing at the moment. Overcrowding means very poor conditions for inmates in prison. Overcrowding also plays an impact on the mental health of an inmate. With more inmates in prison, prisoners spend more time in their cells, they have less privacy, and healthcare becomes less accessible. In 2018, the University of Georgia did a study on how punitive approaches and overcrowding corresponds with aggression and depression.

The prison industrial complex can exacerbate previously existing mental health problems or even create new ones. Solitary confinement is another punishment in jail, which forces an inmate into isolation for periods of days to decades at a time. This plays a great toll on one’s mental health. Humans are known to be social beings who require interactions with others. An article in the Journal of the American Academy of Psychiatry and the Law explains how depriving one from human interaction causes pain to the same extent as physical pain. Dr. Sharon Shalev, author of A Sourcebook on Solitary Confinement, shares some issues that those in isolation can experience. These symptoms include anxiety, depression, hopelessness, anger, hostility, worsened preexisting mental health issues, outbursts of violence, and even self-harm or suicide. Research shows that those in solitary confinement are more susceptible to suicidal ideation.

It is known that prison is a very violent environment due to fights between inmates and the aggressive treatment of inmates by guards. Witnessing this violence can worsen preexisting mental health conditions or lead to the evolution of post-traumatic stress indicators such as anxiety, depression, hypersensitivity, and suicidality. If treatment is not provided to those who have mental health illnesses in prison, these issues can get worse. Inmates with untreated mental illnesses can pose as a threat to public safety once being released. Even more so, inmates without proper mental health care may also be a threat to themselves. 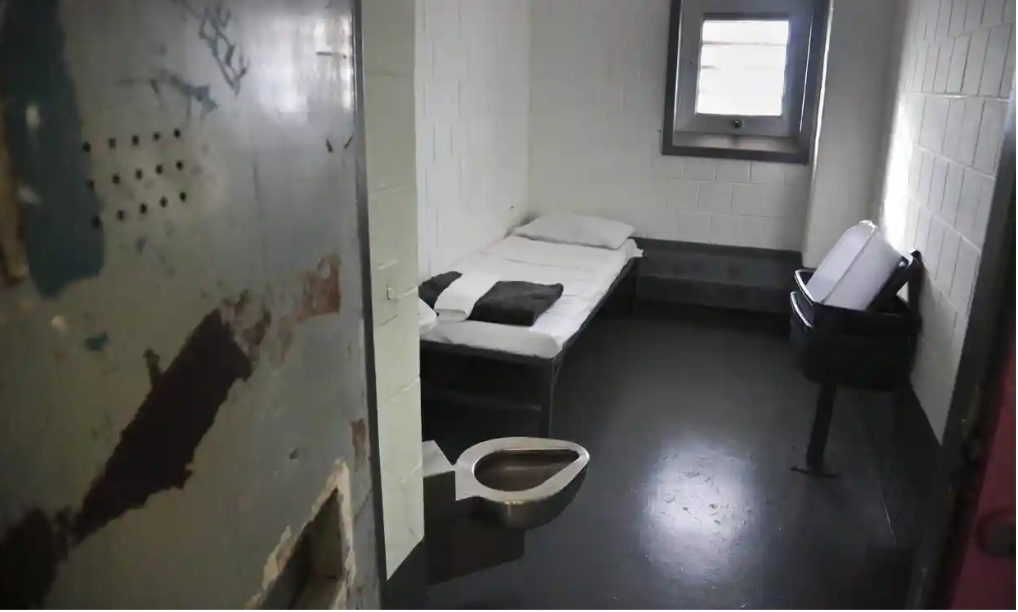 This was seen in the case of Kalief Browder. The film 13th, directed by Ava DuVernay, tells Browder’s story. In the film, ex-offender, Kalief Browder, spoke about how he had been put in jail as a teenager for a crime he did not commit. The crime being allegedly stealing a backpack that contained valuables. He spent 700 days in solitary confinement. Unlike many others, he chose not to take a guilty plea deal; rather he chose to go on trial — despite being threatened with a larger consequence due to mandatory minimums.  Browder hanged himself at only 22 years old. It was later discovered that Browder was convicted of a crime he did not commit.

Recently, Louisiana has been working to recognize the mental toll that solitary confinement has taken on inmates, specifically in youth. The governor of Louisiana signed a law limiting solitary confinement for youth in prison. This law will go into effect on August 1, 2022, following the suicide of two young boys in juvenile detention centers in 2019. Solan Peterson was a 13 year-old boy who ended his life in the Ware Youth Center in Coushatta. He had been sent to solitary confinement after being accused of setting a toilet dispenser on fire. Solan suffered from a very rough past as he had been in the foster system throughout his childhood. He was diagnosed with PTSD and ADHD prior to his detainment, but the prison staff ignored Solan’s medical history and did not give him a physiological evaluation within 72 hours of his arrival. Just 72 hours beforehand, 17-year-old Jordan Bachman hanged himself in the Ware Youth Center as well. The prison’s lack of attention to mental illness resulted in the loss of these two boys’ lives.

Louisiana’s ratification of Solan’s Law, which focused on evaluating a child’s risk level before jailing them, is a step forward in recognizing the physical and mental pain inmates endure in prison, especially at-risk youth. Ultimately, one inmate’s lack of treatment does not only threaten their well-being, but it also threatens the lives of others. The health of inmates must be prioritized to mitigate the post-traumatic stress that develops within prisons. Moving forward, rehabilitation in prison should be one of the top priorities to the criminal justice system, as should inmate mental health awareness and treatment.

If you are in a crisis, contact the national suicide and crisis lifeline by calling 988 or refer to their website.