Following hurricane Ida evacuation, I was told by my roommates after a long day of travel that our utilities were turned off. I then walked into my bedroom to discover water damage across my ceiling. It was undeniably a tough day, as all I wanted to do was take a hot shower and figure it all out in the morning. Yet, true to NOLA-style, my roommates and I decided to make the best of the situation and have a fun night out now that we were all back together, so we got ready and walked over to our favorite neighborhood music venue and bar. We didn’t even check the schedule online to see if someone was playing, we just knew we wanted to spend our night at Gasa Gasa, the place we call home in a different way.

Tucked away between Crescent City Comics and Domino’s Pizza on 4920 Freret Street, stands a building with a hand-painted black and white mural towering over 15 feet tall. The street-facing mural features four angles of a male face. It depicts him wearing sunglasses with his hands held up to his mouth singing and shouting to music. There’s pops of gold color highlighting his forehead and nose to contrast the monochromatic style on the black background. The shear size and dramatic expressions of the image make it hard to miss when passing by. The building is known as Gasa Gasa, the neighborhood music venue that highlights uptown New Orleans nightlife.

Outside, the property has a full, wooden bar and seating area filled with blue square tables and pink chairs that can seat up to forty guests. The patio is illuminated up by warm colored string lights canopying across the wall murals. On one side, a blue wall covered with a painting of a blue dinosaur brings a childhood favorite animal to the adult venue. On the other side, a pink and purple gradient background features a cursive “Smell ya later” with palm trees and a pineapple. The popular imagery often associated with vacationing, suggests symbolism of hospitality as it welcomes the guests. The pink, purple, and blue color palette provides a feeling of passion, youthfulness, and friendliness, all of which contribute to the welcoming and inclusive atmosphere. 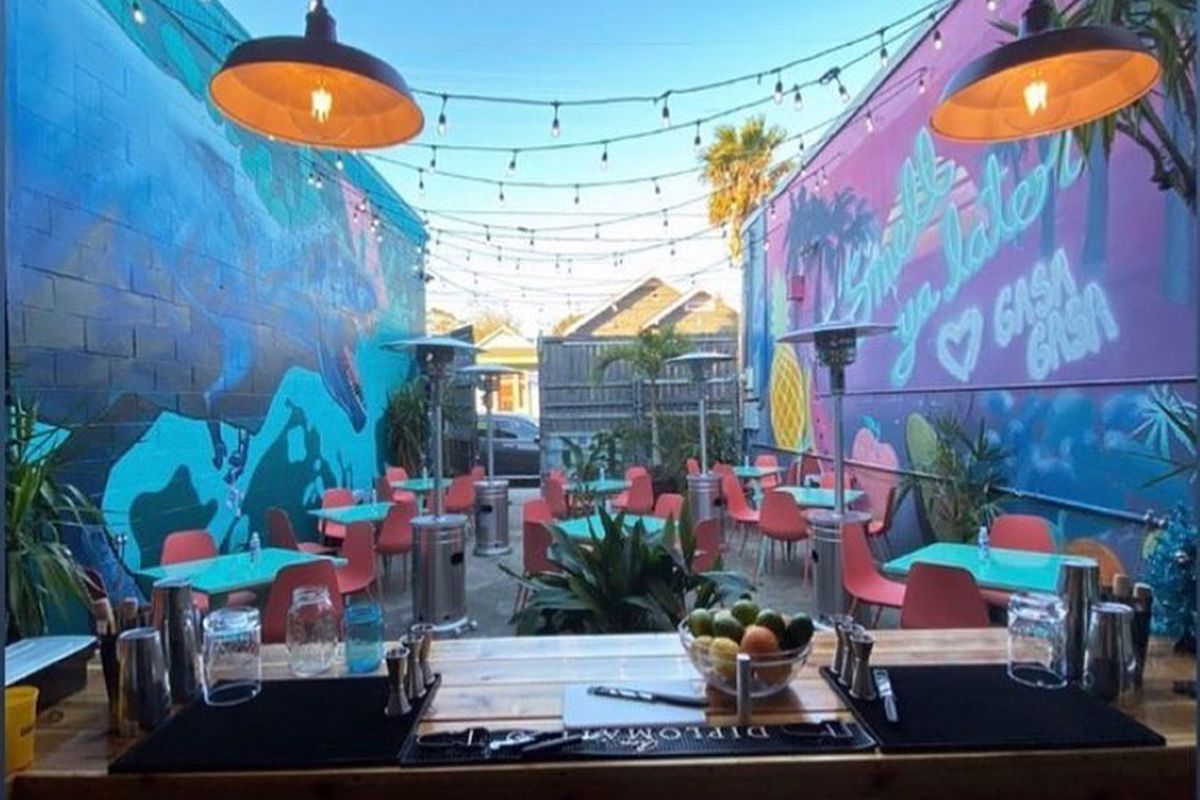 Nestled between the tables are plenty of tropical plants and heat lamps that give the area a fun, youthful energy that can be comfortably used year-round. As you step inside, you’re greeted with a darker interior equipped with another full bar, high tables with seats, and an intimate, elevated stage with a mirrored backdrop. While the property as a whole is rather small, there’s plenty of room for attendees to stand or dance. Even the bathrooms are a show themselves, covered in stickers, graffiti, and painted designs. From a sticker on the women’s mirror stating “You don’t need to be pretty” to handwritten writing in the stall saying “burn your bra, eat the rich”, the hole-in-the-wall treasure speaks for itself. The friendly colors and socially forward quotes, some of which could be considered taboo by some, create an alternative environment that is inclusive of thoughts and opinions. The ability to have an open dialogue between the patrons and the space along with bold and playful murals make the space feel unpretentious and freeing. The term Gasa Gasa, is Japanese slang for “doing too many things at once”, which truly captures the essence of the venue. This feeling justifies the name’s meaning, as it does too many things at once by accepting anyone and anything. 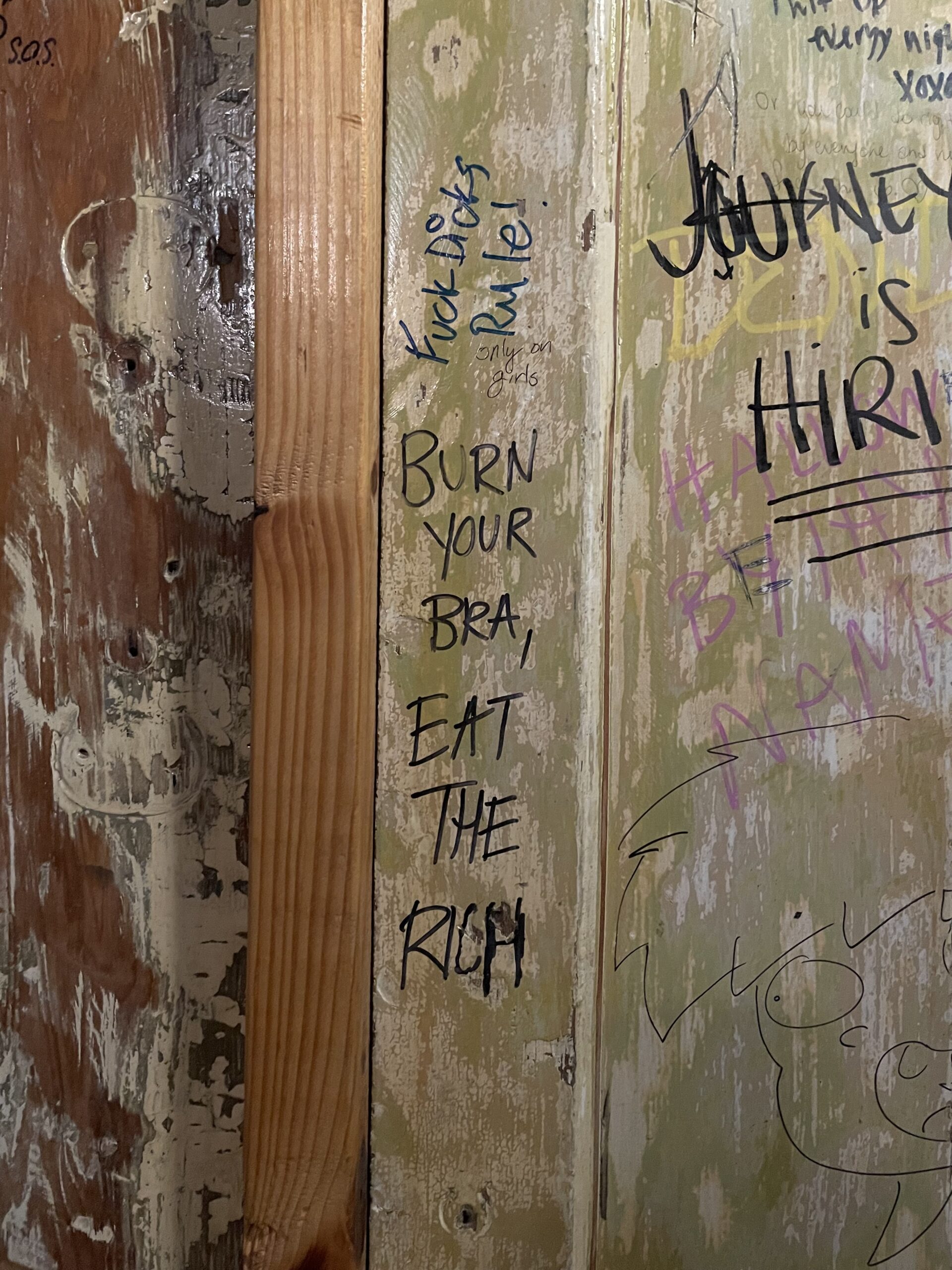 As we walked up to the venue, we were informed that the show had already started and they weren’t sure how many more songs they were playing that night. We took the chance, paid the ten dollar cover and stepped inside. We saw a crowd of maybe 20 people, ranging in ages, styles, and energys. There were a few older couples in the back sitting together at the tables, smiling as they sipped their cocktails and nodding to the music. A friend-group of young women in their twenties, wearing cowgirl boots, bell bottom pants, and crop tops, drunkenly danced at the front of the stage while yelling to the lyrics. A couple wearing all black and covered in tattoos stood near the bar, holding each other and smiling ear to ear as they swayed.

What makes Gasa Gasa so unique is this feeling it creates. The venue clearly has a focus on the indie and alternative scene, featuring local artists from country singers to rock bands. Each night is a different vibe, and the people in the crowd have notably different aesthetics as well. As a college student, I try to venture out from the college “bubble” as much as I can. Other forms of nightlife, such as fraternity parties or bars closest to the university are targeted specifically for college students of that college. While I do enjoy going to these places from time to time, Gasa Gasa is catered towards anyone who lives in New Orleans. There is no pressure to act or dress a certain way. While going to Gasa Gasa, I’ve talked to singers that will travel across the country in a van just for a one night performance. I’ve met an actor from Long Island who had some of the best accent impressions I’ve ever heard. I notice myself feeling more confident wearing whatever I feel like that night, whether that’s casual, dressed up, or just plain outside of my comfort zone, simply because I know that anything goes and everything is accepted. 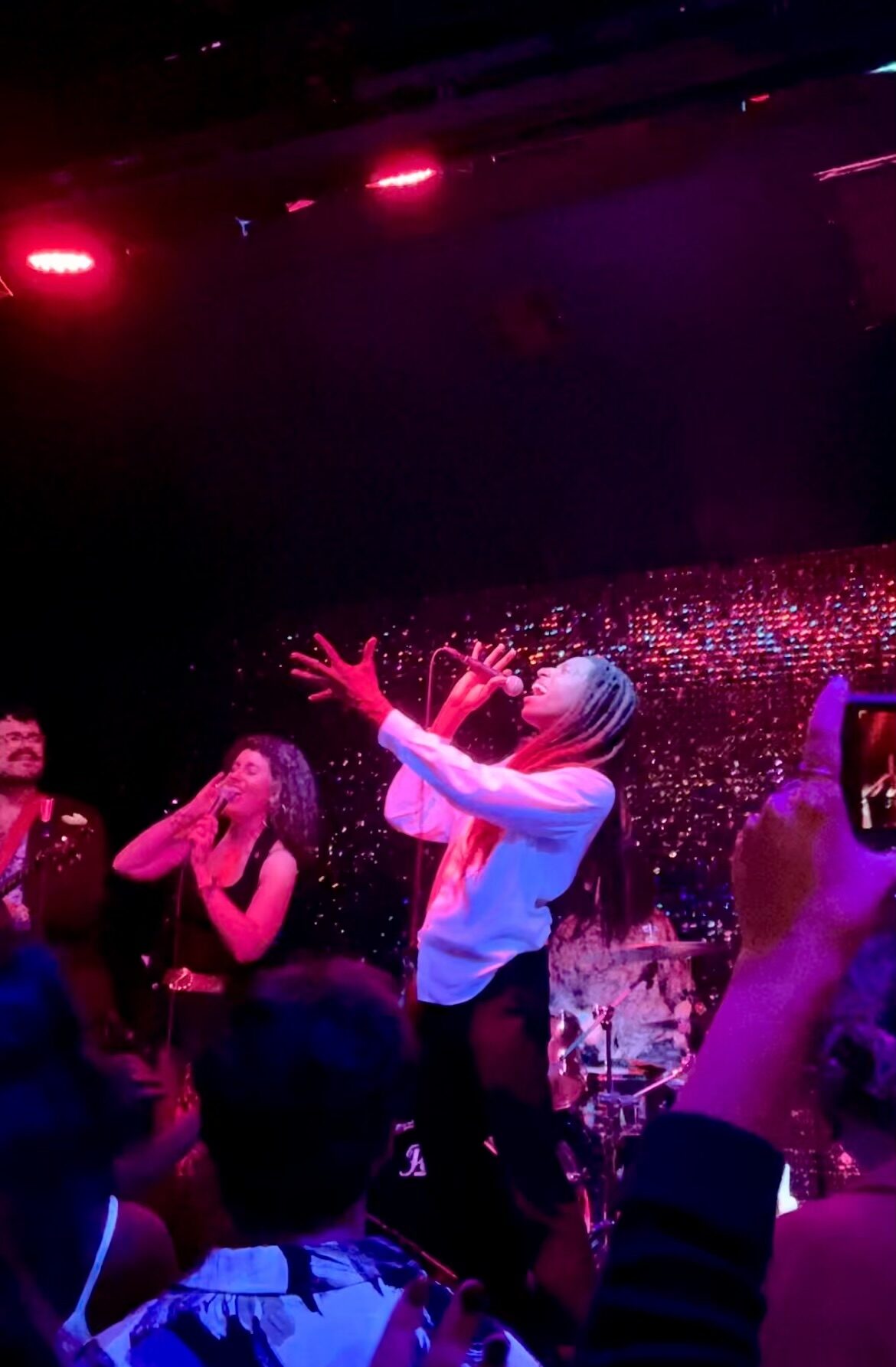 Two key reasons communities form are when one or more individuals want to connect with others possessing similar values, beliefs, and interests, in addition to being co-located. However, what creates a successful community is when there is freedom of expression among its members. Positive communities are those who have its members feeling comfortable to be who they are and speak their minds about what is important to them. New Orleans prides itself on being an especially unique city, and is world-renowned for its distinctive music, iconic Creole cuisine, unique dialects and traditions. In a city that encourages this individualism, it’s only fitting that the audience of Gasa Gasa showcases people of differing social circles gathering in this space to enjoy music together. The atmosphere of Gasa Gasa encourages these aspects of a positive community, from the writing in the bathrooms to the design of the space.

In an article from Offbeat Magazine, it states that, “the ethos of New Orleans encompasses inclusion, community, and creativity”. Gasa Gasa encompasses these New Orleans ideals all under one roof. The music venue and bar is “too many things at once” in the best way, a true New Orleans style gumbo. Everyone, 21+ of course, is welcome, and everyone is there to have a good time.