Getting your ready for the weekend and sending out our #WCW: The Queen Diva Bounces to the Top 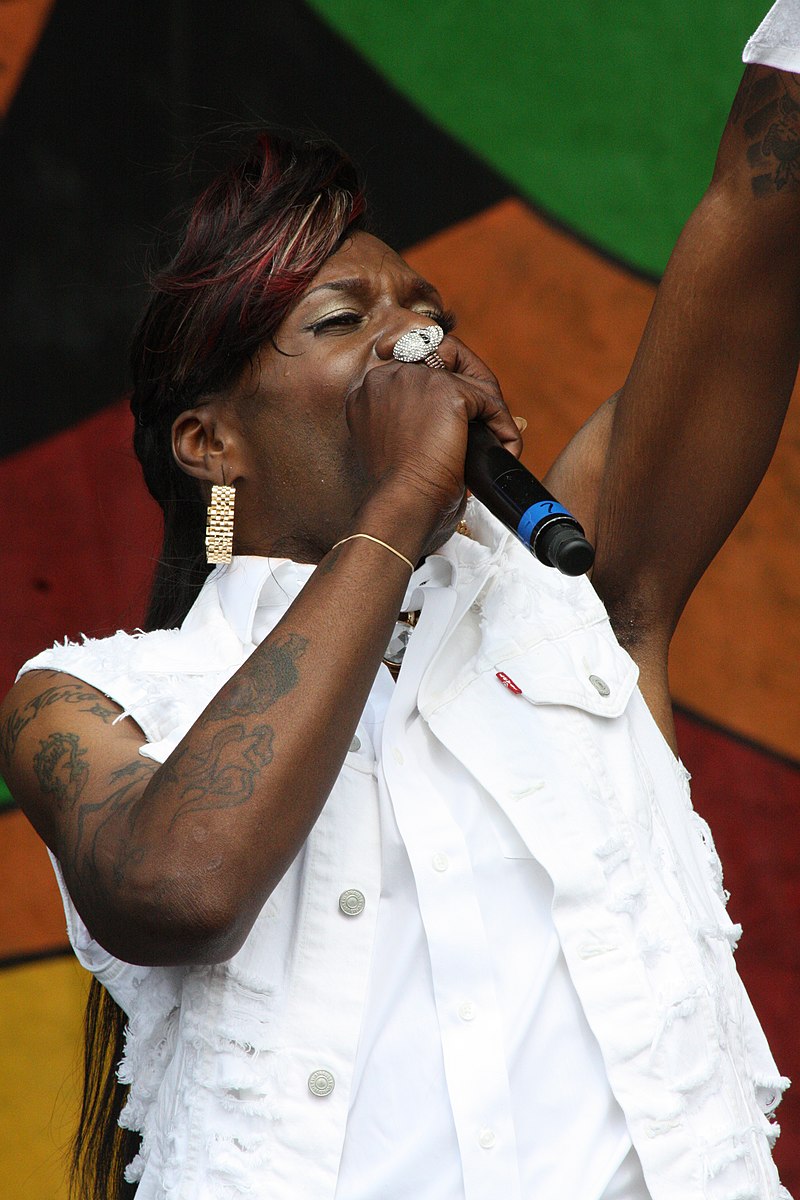 In 2013, 300 New Yorkers got together to break the world record of most people twerking in one place. People of all ages were dancing the infamous move showcased by Miley Cyrus’s 2013 VMAs performance, but the person responsible for breaking the world record was the Queen of Bounce, Big Freedia. When asked what setting the record meant to her, she said it meant, “Opening the door for Bounce music, setting a record for Bounce music. And letting the world know that we been twerking for a long time.” Though Freedia is largely responsible for the spread of Bounce music, she faced discrimination within her community for her sexual orientation and gender ambiguity.

In the late 1980s, Bounce music originated from New Orleans’ housing projects. Big Freedia was part of the underground recreation of Bounce music that many people in the community doubted because it put women’s pleasure at the forefront. Although Freedia identifies as a gay man, she says that her fans prefer her to be called “she,” and she does not care what pronoun people use because she is comfortable being who she is.

Freedia’s Bounce music involves call and response chants and up-tempo rhythms. At Big Freedia’s performances, she brings women on stage to dance and encourages other women in the crowd to “shake.” These hypersexual displays are a stark difference from Freedia’s upbringing in the Baptist church. Freedia says many people in the church did not accept her homosexuality but she continued her dream of becoming a Bounce star without changing her identity.

Freedia continued chasing her dreams and embracing her femininity, as she is often seen with different colored wigs, long acrylic nails, and a full face of make-up. Society, however, was not accepting of people like Big Freedia. The Human Rights Campaign explains that gender non-conforming and transgender people are being murdered at alarming rates, and many of the stories go unreported. Freedia was shot in 2005, she says “What the motive was, I don’t know to this day still.”

During this time, Bounce music was “Gangsta” music mainly created for and by straight men. Freedia faced challenges within her community, as many people categorized her music as “sissy bounce” and not mainstream bounce music. Since Bounce music was dominated by straight men, many abandoned the genre as they saw non-Bounce rappers, such as Lil Wayne, become famous around the nation. Straight male Bounce rappers would critique Freedia’s sound for “going pop,” and not staying true to New Orleans’ Bounce. 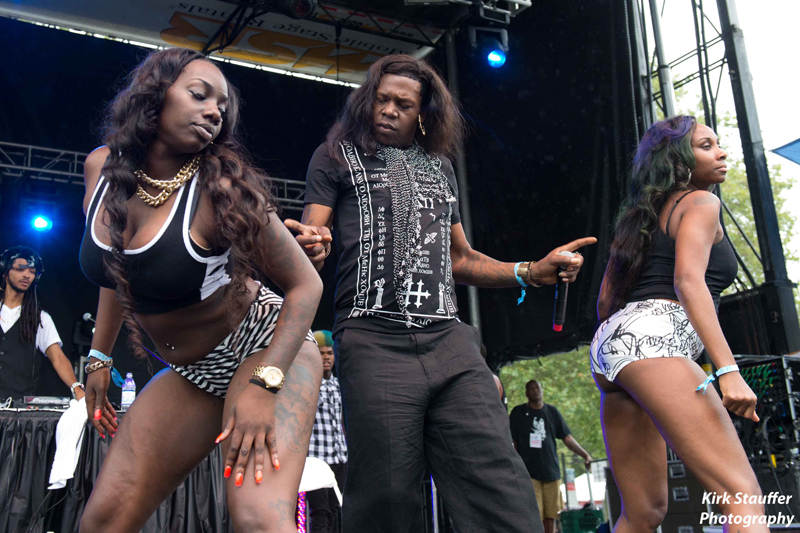 Big Freedia and her backup dancers twerking during her performance at Bumbershoot in Seattle, WA. (Photographed by Kirk Stauffer. Photo from Flickr.)

Freedia ignored the critiques from the straight male rappers and stayed true to her sound. She quickly became famous in New Orleans, regardless of the criticism she received. Her song “Gin in My System” is even listed on Rolling Stone’s list of “20 Essential New Orleans Bounce Songs.” In 2011, she appeared on a critically acclaimed TV series Treme with fellow Bounce stars Katey Red and Sissy Nobby. Later in 2013, she developed her own reality TV show. Freedia even published her autobiography, Big Freedia: God Save The Queen Diva!

One of the biggest milestones in Freedia’s career was in 2016 when Beyonce released “Formation” that sampled Big Freedia’s voice. Later in 2018, the artist Drake sampled Freedia’s voice for his number one hit “Nice for What,” a song about women not owing anything to men. Freedia, however, is not credited as a feature artist in the song. These songs solidified Bounce as a genre, but artists like Drake do not give credit to those who helped develop the sound. Black womxn are often invisible or criticized for things they create, but later on the mainstream popularizes it and does not give them credit.

Andrea Ritchie describes how “Historic representations of Black femininity coupled with contemporary memes—have rendered Black girls subject to a public scrutiny that affects their ability to be properly situated in the racial justice…” Although Big Freedia does not identify as a woman or transgender, she as a Black androgenous LGBTQ person faces more injustice compared to Drake, a black cisgender straight man.

It was reported that in 2019 at least 25 gender non-conforming and transgender individuals were murdered, and 91 percent were Black. Though Freedia does not identify as transgender, her gender ambiguity and racial identity puts her at risk of violence and unequal opportunities. Black Lives Matter cofounder Alicia Garza says that the Black Lives Matter movement “affirms the lives of Black queer and trans folks… and all Black lives along the gender spectrum. It centers those that have been marginalized within Black liberation movements.” Freedia received criticism from the Black community for her “sissy bounce” and was originally excluded from the Bounce movement. Later on, when attempting to break into the mainstream, she is discredited for her art. 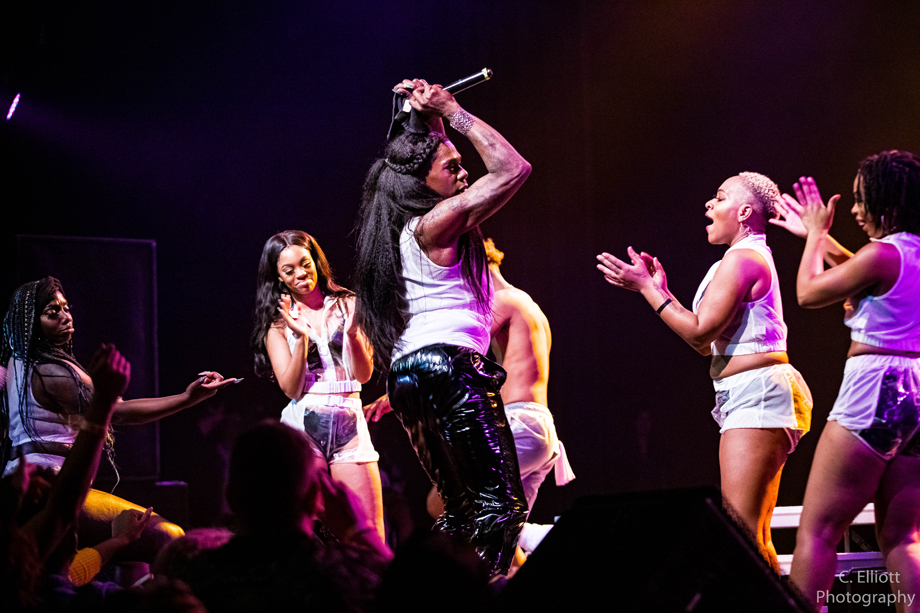 Big Freedia dancing as her backup dancers applaud her. (Photographed by C. Elliot. Photo from Flickr.)

Big Freedia currently has one million Instagram followers and 168,000 YouTube subscribers. She stated that she had support from her mother after coming out as gay, but she said “Some members of my family weren’t so happy about it and they spoke their minds and I spoke mine back. I had to fight in the neighborhood and at school and I had to stand up and be who I wanted to be. That’s just the way it was. And here I am.” Freedia is credited as being the Queen of Bounce and encourages her fans to find their self-confidence by exploring their sexuality and never being afraid of expressing who they are.