Artist John Legend in front of his favorite instrument, the piano. (Photo by: Lunchbox LP)

In a world filled with chaos, turmoil, unjust, and division, everyone needs just a little more love. Who better to provide that inspiration than the soulful legend himself? John Legend’s seventh studio album, Bigger Love, was released on June 19, 2020 amid the Black Lives Matter Movement Protests, a global pandemic, and political unrest. His unifying messages transcend all boundaries to emphasize the importance of needing a bigger love.

Through Legend’s music I feel the intimacy of a new couple. I see two people in love just enjoying the simple things in life. I hear support. I hear comfort. It’s casual, it’s slightly provocative, and it’s oozing with intimacy. It is in every sense of the phrase: a bigger love.

The heavy emphasis on the piano complemented by the optimistic lyrics and the rich vocals places this album into a neo-soul R&B blended genre. In fact, Bigger Love would go on to win the Best R&B Album at the 63rd Grammy Awards. This 16-track album guides listeners on a journey of embracing love. From its opening song “Ooh Laa” to the album header “Bigger Love” to the closer “Never Break,” this album contains strong, consistent pieces throughout its entirety.

The first time I heard this album, I was driving from Atlanta to New Orleans alone. I have a particular playlist labeled “music” that contains my all-time favorite pieces. This list has certain requirements: I must be moved by the lyrics and encapsulated by the melodies. While listening to this album, I found myself constantly adding songs to this very exclusive playlist. Despite being alone in the car, this album drew fond memories of those I adore most. Within those 55 minutes and 57 seconds, I was not alone. I felt that “Bigger Love.”

In Legend’s opinion, Bigger Love takes fans on a trip down memory lane back to his music’s original sexier vibe. Songs like “Ohh Laa” and “Wild” remind fans of the younger Legend who produced songs like “ Tonight (Best You’ve Ever Had).” As he has done in countless of his old songs, such as “Penthouse Floor,” and “P.D.A. (we just don’t care),” Legend’s flirtatious persona bleeds from each of his new tracks. Even by just listening to the music, you can feel Legend smiling and grooving while recording. He seems to almost tease listeners. In his piece “U move, I move” with artist Jhene Aiko, Legend glides through the music solidifying that sometimes you need to just “go with the feeling.” His songs scream sexuality and attractiveness. Legend has a soft belting tone that occasionally drifts into a falsetto. His choice of string instruments, heavy piano, and a splash of drum make these typical ballads uplifted. 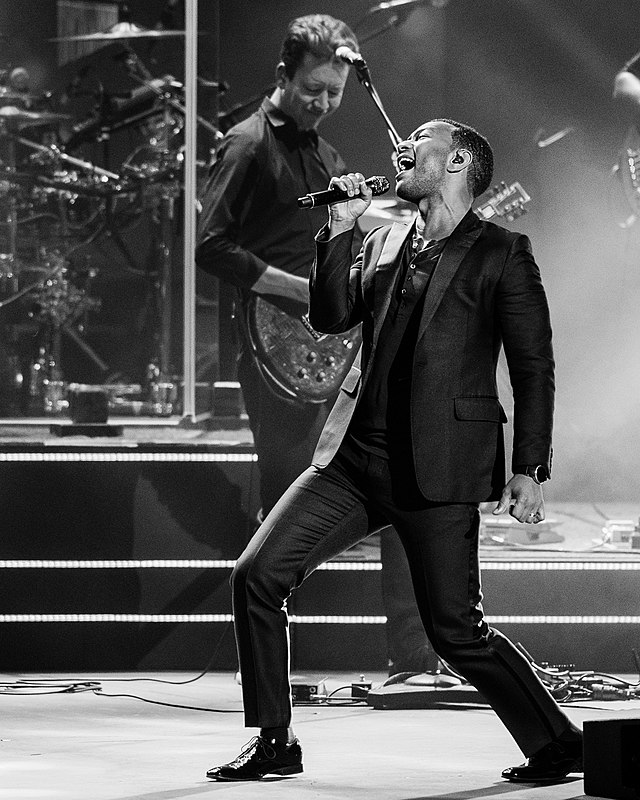 John Legend performs at the Paramount Theatre in Seattle (Photo by: John Lill)

This dynamic combination is enticing and sultry.  As someone who has been open about his more risque experiences in life, this album highlights Legend’s comfort with eroticism. Legend performs these seductive songs through a heterosexual male gaze. He constantly eludes to sex and the lengths he would go for the woman who has caught his eye. As a Black man, his perspective differs from that of a heterosexual white man, even despite maybe having the same sexual preferences. This difference is directly related to the perception of Black men in society, and, more specifically, within the music industry.
Nonetheless, all songs on this album resort back to that common trend of universal love. His message ultimately always ends with love as the remedy for any imperfection. In one of the most popular songs on the album, “Conversations in the Dark,” Legend softly sings  “I will always want the same you. Swear on everything I pray to, that I won’t break your heart” (Legend, 2020). He does not just talk about sex like he does in “Wild” by saying,  “I want to drive you wild,” but also about the respect he wants to and should give to his partner. The song begins on a quieter note. This softness enables the audience and the respective partner to become comfortable “in the dark.” As the song builds up and the beat intensifies, Legends vocals redirect into a stronger belt that exudes passion, desire, and unwavering love.  Legend created an album that beautifully intertwines the elements of pure love with the temptations of passion.

Along with loving one another, the idea of supporting and embracing each other stands as the other most prevalent message in Bigger Love. Despite writing these songs in 2019, the essence of the album was even more necessary on its release date in mid-2020 and beyond. Legends feel-good music is inspirational. Even right before the publication, Legend was unaware of how vital these lyrics would be in the world today. This country is more divided than ever before. Just coming off the brink of the George Floyd Protests and the heart of the Black Lives Matter movement, the country was uneasy and needed political direction that frankly was not coming. The world was quarantined due to a global pandemic and desperately seeking interactions following their social isolation. To make matters worse, we had a president who was contradicting science, being blatantly racist, sexist, and homophobic in his dialogue and dividing the country with his propaganda.

Along with his wife Chrissy Teigen, John Legend became one of the most outspoken celebrities against the policies and actions of Donald Trump. He hence became a Black icon as he was a symbol of hope. According to author Nicole Fleetwood, celebrity icons have an “intimate connection between an anonymous and adoring conglomerate of fans… that take place through the realm of desire, fantasy, and aspiration” (Fleetwood, 2015). Although Fleetwood wrote this piece to honor black female icons, Legend too emulates desire, fantasy, and aspirations.  Throughout the shambles of 2020, John Legend remained optimistic of a better day where bigger love persevered.  He was a motivating and unifying figure who elicited hope within all. As a celebrity and pop icon, he has energized a wave of promise through his work and through this album that was lacking in this country prior.

The final song on the album, “Never Break,” sets this album apart from all others. His ballad intended for his wife, Chrissy Teigen, stands as a battle cry to our shattered country. In the song, he cries that “whenever life gets hard, we’ll never lose our way cause we both know who we are.” Although initially crediting the obstacles a typical couple goes through, these lyrics quickly shift into the importance of togetherness on all levels. Later on, in this slower song, the beat intensifies, and Legend begins to belt, “we will never break. Built on a foundation strong enough to stay.” His cries coupled with the strong presence of the piano appear metaphorical to the country’s yearning for a better day. This song is uplifting and motivating. It can be the song you cry and scream to when alone in your room or the songs you sing together with friends and family to 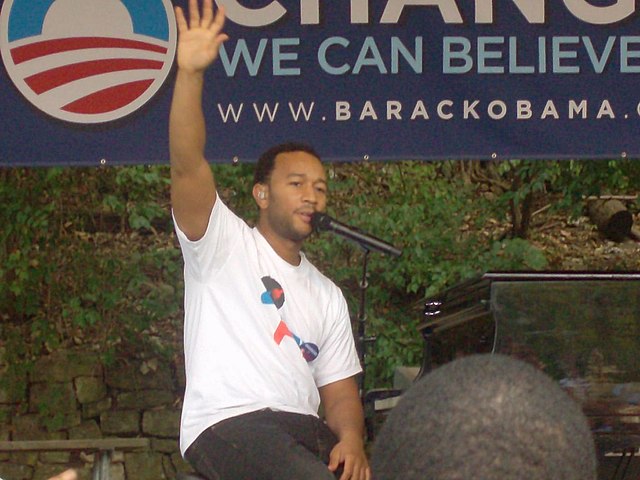 John Legend performing at a benefit concert for former President Barack Obama’s campaign proving that he has always been a Democratic symbol (Photo by: Morhange)

show your support for each other. Whatever this song may be to you it indisputably is one of – if not the – alma mater of 2020. That idea became even more concrete when Legend performed it as the finale of the 2020 Democratic National Convention supporting the nomination of Joe Biden as the Democratic president. This song intends to trigger a positive democratic movement and show that no matter what, we will prevail. Legend became a consistent symbol of democracy going on to perform at the inauguration. Legend’s career consistently represents his values, his opinions, and his morals.

As cliche as his message of love curing all may be to some, to the hopeless romantics and the optimists of the world  (like me) this album was exactly what was needed during 2020. As a long-time John Legend fan, this album did not disappoint me. Rather, it remained my number one played album on Spotify for 2020. Bigger Love to me will always remind me of the resilience and perseverance we all had during this unprecedented time.  Bigger Love stimulates your heart, forcing you to give more of yourself to yourself, to your relationships, and to your community. As the legend himself says it, we frankly just “need a bigger love.”