Miley Cyrus’s Plastic Hearts: There’s certainly nothing plastic about it! 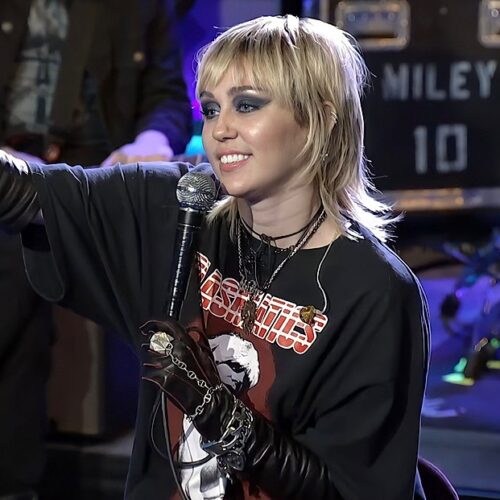 If you were between the ages of 4 and 15, or a parent of a child of that age in 2006 when the iconic premiere of Disney’s Hannah Montana aired, you know who Miley Cyrus is, and you’ve seen her at every stage of her life in the spotlight.

From the “Best of Both Worlds,” to “Wrecking Ball,” to “Malibu,” and “Younger Now,” Cyrus demonstrates that nothing in life is ever set in stone or even perfectly linear and simple. Cyrus has always been somewhat of a storyteller through her music, and Plastic Hearts is certainly no exception.

Both as an artist and as a widely known celebrity, Cyrus has the power to connect with almost every type of person with each song on the album. Each one channels a different musical genre from nostalgic rock, to futuristic pop, and even a hint of country sprinkled in here and there, all while coming into her own more with the raw, authentic, and vintage rock vibes of Plastic Hearts. And the data clearly shows that this album connected with a variety of people, as Cyrus became one of three female-identifying artists to hit 1 billion streams on an album on Spotify alongside Lady Gaga and Taylor Swift in the short weeks after releasing her 15-year anniversary letter to Hannah Montana from Miley on social media. Plastic Hearts epitomizes Cyrus’s connection and peace with the entirety of her past while looking to show off her defiance of the status quo for the foreseeable future.

Cyrus opens the album with “WTF Do I Know,” notably one of two explicit songs on the album (the other being “Bad Karma” featuring Joan Jett), almost to notify us, as the listeners, that she is unapologetically here in this moment as herself, inside and out. She taps into the grittiness that comes with finding your voice and sense of autonomy again throughout the song with the opening lyrics, “I’m not tryna have another conversation // Probably not gon’ wanna play me on your station.” Cyrus poetically pauses between lines as if to say that she couldn’t give a f*** about what others have to say about her or her image. She follows this up by exciting the listener to own and take control of their heartbreak (and by association, their own sense of self) with the lines “You want an apology? Not from me // Had to leave you in your own misery” ringing out through the guitar strums that linger until the beginning of the next note in the climatic chorus.

Maybe it’s Cyrus’s exhausted vocal cords from years of adrenaline-infused performances or maybe it’s just us hearing Cyrus truly express herself through her music for what feels like the first time, but Cyrus gives us an unmatched, raspy, yet almost alarmingly perfect vocal delivery on this album opener along with almost every song that follows. Cyrus leverages the sheer energy from this song to help her listeners believe that it’s the small moments in our daily lives end up comprising our journey as a whole, and even if were not entirely sure what lies at the end of our path, we should be validating each and every “what the f*** do I know?!” moment in our lives.

There is a certain universally shared familiarity behind the beats, instruments, and echoing vocals throughout the album. Cyrus’s Plastic Hearts (in addition to Younger Now) situates itself perfectly in the middle of the aged and the current, and the songs you can dance to and songs you want to sing at the top of your lungs because they tell such authentic stories of heartbreak, finding your voice, and the struggle of feeling like men (or your counterpart in general) hold all the cards (this story more specifically in reference to “Golden G String”). Cyrus made me feel like I was having a “wtf do I know?” moment more than a few times with the transparency she gave us throughout Plastic Hearts. The artist’s sampling of classic 60s and 70s rock songs like the Rolling Stones’s “Sympathy for the Devil” on “Plastic Hearts” and Stevie Nicks’s iconic “Edge of Seventeen” reworked as the backbone beats Cyrus’s “Midnight Sky” in addition to her features of 80’s icons like Billy Idol, Joan Jett, and Stevie Nicks as well as the recording of her smash hit performance of Blondie’s “Heart of Glass” creates a nostalgic magic everywhere on the album. There is an undeniable chemistry between the foot-tapping beats, gritty and passionate classic voices and the listener who craves any sense of familiarity and consistency in the shitstorm that has been the past year of our lives.

Cyrus’s lyrics inspire a universal reminiscence of experiences of love, heartbreak, loneliness, passion, and unapologetic self-expression, as if she is blocking out all of the white noise and stress of just existing in the current moment and transporting us back to the core of our essence with stories about identity and relational challenges through a lens of limitless fire and tenacity. These genderless stories of both peaks and valleys of the human experience are highlighted even more by Cyrus’s universal and androgynous voice heard through her combination of breathy la la’s and almost strained, gritty “oww!”’s, all in addition to black fur-lined coat, tight leather pants and unmistakable blonde mullet. This album’s speedy acceptance into the hall of classics by so much of the general public illustrates how Cyrus’s whiteness provides her with the access code to the room where many BIPOC artists have to wait in line for years to enter.

This is not the first instance in which Cyrus’s skin color has given her some extra room to breathe in her performances. Many of us can vividly draw up visions of Cyrus’s 2013 VMA performance with Robin Thicke. If you’re one of the few lucky ones who didn’t see this performance or have blocked it from mind, let me jog your memory with a couple words: a nude latex bikini, giant teddy bears, tongues out, and twerking. This performance was tacky and unfiltered cultural appropriation, and in 2013 no less. Cyrus was looking to sell something (twerking in this case) that didn’t belong to her in what appeared to be an effort to step out of her family-friendly Disney Channel image. And yet eight years later, she is being so highly regarded for her phenomenal, gender-binary-defying series of live performances and release of a smash hit album, Plastic Hearts. Could it be her whiteness that permits her with a “Get out of jail free” card when it comes to this type of action? It appears that way to me.

Maybe Cyrus looks back on that performance and sees it as a huge misstep, maybe she still doesn’t see anything wrong with it; who’s to say what she thinks about it eight years later. We can only get a glimpse into her personal journey through her music, and it’s visible that the journey to finding herself has been rocky. From musical and personal missteps with Bangerz, Miley Cyrus & Her Dead Pets, to losing her passion and sense of self on Younger Now, we can finally see Cyrus step into her own with Plastic Hearts. We see her raw, gritty, and passionate self, and boy, is it selling!

A key part of what makes this album unapologetically authentic? Cyrus’s honest and enthusiastic indulgence in terms of expressing her sexuality. Amidst the pandemic, Cyrus arguably had a lot of time on her hands like the rest of us did, and in this time she was able to really cultivate her identity and build it up to be something she was genuinely comfortable in, and this album oozes that from every crevasse and breathy pause between lyrics. Right in the middle of the album, rounding out one of the peaks of the lineup is “Midnight Sky.” In Cyrus’s take of the instrumental on Stevie Nicks’s legendary “Edge of Seventeen,” that same grit that we see Nicks display through her grief of the passing of her uncle and John Lennon, Cyrus displays in her passionate singing about her sexuality, belting out “See my lips on her mouth, everybody’s talking now, baby // Ooh, you know it’s true, yeah” with a bone-chilling sense of honesty in her voice. Cyrus calls back to an era of queer liberation in the 1960’s and 70’s here, playing on the androgynous, fellow mullet-wearing, raspy-voiced rock icons of the time to solidify her place in the rock n’ roll world. John D’Emilio’s article, “Capitalism & Gay Identity”, discusses how gay and lesbian communities emerged beyond the confines of the typical nine to five workday, especially in relation to World War 2 factory jobs organized by gender; these workplaces ended up providing a space to further explore queerness outside of the home. Born in wartime factories and bred in the 1960’s and 70’s in a capitalist America with increasingly flexible modes of labor performance, queer communities and the spaces they began to inhabit both physically and in the music and art world blossomed. Cyrus leverages this flexibility in labor performance under capitalism to create a queer space of her own: Plastic Hearts. Although the 1960’s and 70’s ushered in an era of sexual liberation for the gay and lesbian community, this subculture and the social clubs and spaces that opened up were not open for all. These places were exclusive based on race, with primarily white gay men occupying certain bars and YMCAs and other events and spaces such as “annual drag balls brought together large numbers of black gay men” (D’Emilio 470). In this way, Cyrus largely benefits from the larger, more widely accepted existence of white gay and lesbian communities when selling her complete authenticity on Plastic Hearts. In fact, her creation of Plastic Hearts as a socially queer space also doubles as a primarily white queer space.

Beyond sampling from famous white rock bands’ songs, Cyrus also solely features other white musicians. Although this is by no means purposeful or exclusive, Cyrus’s whiteness does permit her more opportunity to move along the gender expression and sexuality spectrum, helping bridge the gap between queer outsider and timeless rock icon, a privelge not everyone is afforded. She profits off of being an ex-star in the Disney media conglomerate that very much catered to the binary; her fanbase from each era of her career arguably follows her everywhere, like a duckling following its mother.

In a world of so much uncertainty, one thing is for sure: Cyrus has arrived, and she is ready to rock as the truest, most unbothered version of herself. With homages to iconic moments and people of the past and the integration of present pop stars like Dua Lipa with a mix of futuristic and melodic country moments, Plastic Hearts will only continue to be streamed beyond its current 1 billion.