The Hot 8 “Get Up” Footloose style: No dancing allowed

The Grammy-Nominated Hot 8 Brass Band is performing on Sunday nights at the Howlin’ Wolf through August. Celebrating a friend’s birthday with a pod of tickets, I went to the May 2nd show as my inaugural Howlin’ Wolf experience and my first live music event since pre-COVID. Ticket holders enter through The Den on the corner of South Peters and St Joseph Street, where people can order food and drinks for the show. Inside and around the corner to the left, past the restrooms, is where the Hot 8 takes the stage, in a dimly lit room facing an empty bar with clusters of chairs set up to encourage social distancing between groups. 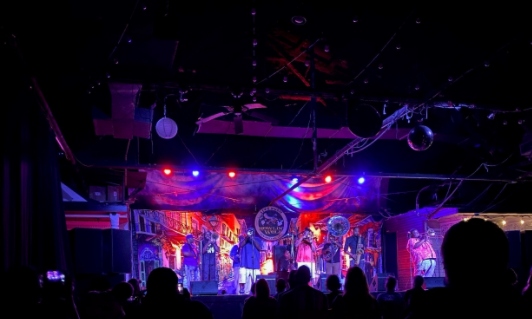 The “footloose rule” was instituted as an additional COVID-19 safety protocol, banning dancing in “open congregate areas.” In other words, dance floors are cancelled for the time being. Imagine the Hot 8, a band known for “second-lining,” telling an audience not to dance. As an audience member who experienced this, it felt like I was in a 2nd grade classroom and the teacher told us we could not get out of our chairs. Except the teacher was a Grammy-Nominated band of ten talented musicians who clearly love dancing and want to be able to dance with us. Then it felt like I was at a comedy show and the comedian just told everyone not to laugh: “but that’s literally the whole point” rang true in my head. Pretending not to dance is pretending not to be a second line band. 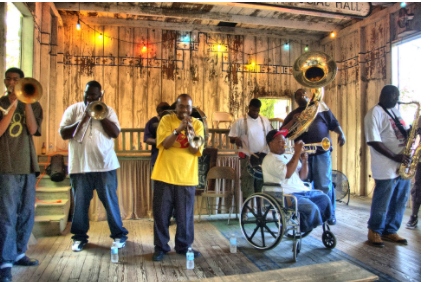 (Photo from Flickr and taken by Peter Clark, showing the Hot 8 performing at Dew Drop Dance & Social Hall in Mandeville taken on April 3, 2011)

Born in New Orleans over 20 years ago, the Hot 8 Brass Band quickly became one of the “most popular and visible” second line bands for jazz funerals and community celebrations where people follow the band dancing in the street. When standing on the Howlin’ Wolf stage, the Hot 8 traded their masks for microphones and an instrumental mix of trombones, trumpets, drums, a sousaphone and what looked like a metal ribbed vest at first glance. In case you’re unfamiliar with what a “frottoir” or “washboard” instrument is, like I was, it looks like a metal vest but is actually a cajun and creole percussion instrument. For a second line band, performing in front of an audience that is not allowed to dance might cause some sort of anxiety.

Any semblance of performance anxiety dissipated when the Hot 8 started playing and soon after, people struggled to stay seated for the show. The music started around 9:30pm and a few people were standing up dancing within 30 minutes. A breaking point for many came to the tune of “Get Up,” when half the audience launched out of their seats while the band sang “Ooh, I love the way you vibe with me, dance with me forever.” The Hot 8’s original request for the audience not to dance was coupled with a sincere apology and a laissez faire enforcement. By laissez faire enforcement, I mean equivalent to when a substitute teacher is asked to enforce classroom rules they didn’t create and might not agree with. There was dancing, but people were not crowded on a dance floor. Some people chose to sway and groove near the front of the stage. However, masks were enforced for audience members unless eating or drinking.

Center stage stood a band member in a gray shirt, who changed to a red shirt for the second half of the set, gyrating along to the beat of “Sexual Healing.” Although an upbeat song, the lyrics “whenever blue tear drops are falling and my emotional stability is leaving me…” allude to darker times. Since forming over 20 years ago, the Hot 8 has tragically lost four original members to murder, street violence, and illness. Also being displaced by Hurricane Katrina and having one of their trumpet players lose his legs in a terrible car accident, the band understands pain and tragedy. Perhaps this is why when the Hot 8 perform their version of “Sexual Healing” by Marvin Gaye, the song feels like it belongs to them.

The show paused for several brief minutes when one bandmate requested water and a random audience member shouted in support “Get the man some water, Jesus!” The trombone player on the front left of the stage took the time as a fair opportunity to empty the moisture that had accumulated inside his trombone, and a flow of liquid slipped onto stage. Although the possibility exists that musical performance is a mask in and of itself, simply a mirrored reflection of what the audience believes the band to be, I look at music as a liberating force that strips away inauthentic expectations, or masks, if you will.

Ironically, we’re living through a time when physical masks are required. Whether this encourages people to be their most “masked” selves or ignites authenticity, sparked by the anonymous courage a mask may bring, is debatable. Performing and attending live music right now, on the cusp of COVID-19, means masking up to get down, and adhering to social distancing as well as “footloose rules” for as long as necessary. 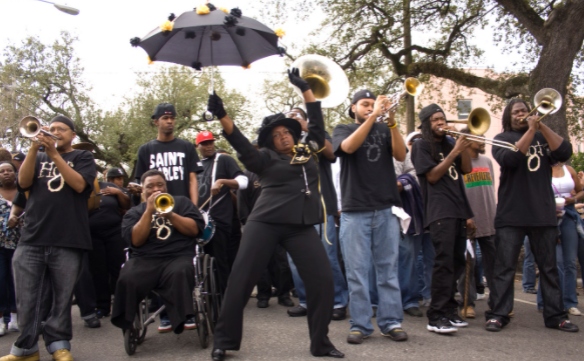 (Photo taken by Derek Bridges from the Hot 8 performing at the Lady Rollers Second Line Parade, originally posted to Flickr and uploaded to Commons on 25 January 2010)

When Harry met Derek and the LPO: An evening with Derek Smalls
Music

Orchestras step up for classical musicians impacted by 2016 flood
Music