Cowboy hats, fur coats, and what it means to lead the life of a heartbreaker. These are the aesthetics of Miley Cyrus’s most recent album Plastic Hearts, the rock album we all knew she was meant to produce. The fifteen-track album offers listeners whiskey scented ballads about claiming freedom, and gritty upbeat tunes with the potential to replace go to “get hype” songs. Cyrus’s transition from pop-country to making rock classic “Heart of Glass” by Blondie sound like her own song was so seamless that you might question which came first, Miley or the mullet? Her new image of thick eyeliner, leather outfits, and short shaggy hair serve more purpose than just looking awesome. Cyrus’s embrace of rock and roll as a pansexual, gender fluid person, is an embrace of rock and roll in its truest form: something that everyone can participate in. Reinforced by her androgynous look, Cyrus is challenging the idea of gender within the genre, and revitalizing a new rock and roll during a pandemic. 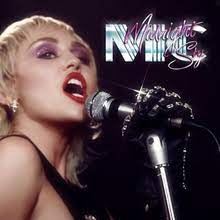 But, for all of the praise we give her for her powerful performances and zebra-print pants, we must balance with accountability, or, a bit of realness. Miley Cyrus is not the first artist to challenge gender and sexuality through entertainment. She is also not the first person to wear zebra print pants; hello, Billy Porter! Cyrus’s decision to challenge gender in rock music through her transformation from teen icon to anti-Hannah Montana is supported by the fact that she is a massively famous white artist, with a fan base that grew up with her. We saw a similar conversation after the November 2020 issue of Vogue featured Harry Styles wearing a dress on the cover. Gorgeous, yes. First-ever, no. There have been many black artists like Prince who have dedicated their entire careers to challenging gender. Diana Ross has been celebrating queerness since the “I’m Coming Out” era. But history has favored the trailblazing men more than the trailblazing women, so there is something to be said about Cyrus using her powerful voice and influence to occupy a space that was mostly masculine.

Cyrus’s rock debut couldn’t have come at a more relevant time. Several months ago, Cyrus’s cover of Blondie’s “Heart of Glass” blew up on social media app TikTok. People just couldn’t stop talking about how cool and hot Cyrus looked. Online audiences were astounded at her powerful grit, surrounded, but never drowned, in upbeat drums and energetic guitars. It was a global “I knew Miley Cyrus could sing, but not like that” moment. Maybe it was the short shag haircut or the head-to-toe black bodysuit, or maybe it was Cyrus’s ability to make a listener feel like they’ve played a thousand poker games with a table of whiskey connoisseurs in just a 60-second clip. Her performance blew up because of the feeling it induced in listeners. Ann Cvetkovich’s An Archive of Feelings considers national tragedies and the emotional side effects as a shared experience, specifically related to queerness (6). The timing of this performance had much to do with the reaction. Plastic Hearts was released during the ninth month of the Coronavirus pandemic. In those nine months, social media saw a renaissance of gender and sexuality. Many young people came out as bisexual, pansexual, and gender nonbinary. Isolation acted as a catalyst for self-discovery, creating a long term chamber where an individual is only performing for themselves. An archive of feeling is, just that, collective feelings, so it is not that young people began publishing theory about sexuality and gender. It is that a whole generation experienced a rebirth simultaneously, with no planned coordination. Plastic Hearts completely embodies this rebirth, as its themes are embracing all genders and all sexualities through performances that everyone is invited to.

Depictions of rock and roll often involve a long-haired heartbreaker who has a soft spot for a young fan with big dreams, but is ultimately “born to run.” In songs like “Midnight Sky,” Cyrus makes it clear that she “don’t belong to anyone,” and in doing so is occupying a space that is historically masculine, or at least, not what was expected of her: a celebrity born out of the Disney factory. “Midnight Sky” sounds like strobe lights. The fast-paced beat that never slows down transports us to the middle of a sweaty nightclub, in the best way. Throughout the song, Cyrus’s voice sustains a powerful belt. She’s not Penny Lane; she’s the rockstar who you’ll never tie-down. The sultry guitar combined with the upbeat drums creates a smoky atmosphere that the listener can’t help but be curious about. In this way, Cyrus creates a sonic archive of feelings that imbed the lived experience and all of the unspoken truths, good and bad, about rock and roll. Toward the end of the song Cyrus belts “I don’t hide blurry eyes like you,” speaking directly to those who disapprove. 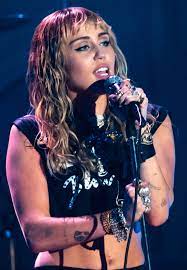 “Bad Karma” gives a similarly steady drumbeat that makes us feel like we’re anticipating something, or perhaps missing out on something, followed by the eruption of guitar that lets us know it has arrived. Between beats, Miley includes rhythmic moans that directly summon the male gaze to let it know that it isn’t a part of the joke. Cyrus’s power in vulnerability in lyrics like “I never learn my lesson so I always do it twice” adds to the archive by creating a new type of empowering break-up song. Yeah, she can’t be monogamous right now and she won’t be made to feel bad about it! Don’t say she didn’t warn you. This authenticity in accepting flaws and being proud of them strikes a powerful chord with Cyrus’s fans: young people trying to find themselves while also navigating what it means to go to college during a pandemic.

Instead of writing lyrics about a post-tragedy resilience, she is writing that she never really cared about the tragedy at all. This theme is solidified in the first track “WTF Do I Know” as Cyrus rhetorically asks us “am I wrong that I moved on, and I don’t even miss you,” presumably talking about ex-husband Liam Hemsworth. It is a version of an empowering anthem that songs like “Truth Hurts” by Lizzo once were, but in a new “I don’t play the nicest but it’s not a fucking crime” way. Cyrus’s embrace of rock and roll is “spontaneous and uninhibited” (Menand). Cvetkovich writes about how traumas are “connected to the textures of everyday experience” (6). Something about the lyrics plus the spin on the classic rock sound of Plastic Hearts is directly related to that idea. However, this embodiment (of sorts) and challenge of toxic masculinity is enabled by Cyrus’s whiteness. In other words, Cyrus can do pretty much whatever she wants, and she will always be supported, whereas artists like Mariah Carey struggled to be allowed to wear “provocative” dresses until several years into her career. Because of Cyrus’s whiteness, she can skip the “proving herself” phase, that so many black artists, female and male, have been forced through just to be themselves.

The togetherness of rock and roll comes largely from the opportunity for an audience to express a shared sentiment in mass groups by screaming lyrics together. Cvetkovich writes that trauma forms a connection between “politics and emotions,”  (6) which is a theme that is directly expressed through the togetherness of rock music. We see this in “Golden G-String,” one of the album’s softer-acoustic songs about the role of politics in the depiction of sexuality. As Cyrus’s career has progressed, nakedness has become increasingly more important. After her infamous music video for “Wrecking Ball” was released, Cyrus was flamed with accusations of exploding her body to appeal to the male gaze and prioritize being sexy, yet, the crowds at her concerts were, and remain, mostly women. She speaks directly to her critics who “told (her she) should cover it, so (she) went the other way.” “Golden G String” is an ode to her career and all of the backlash that has come with it. Cyrus sings of “the old boys hold all the cards and they ain’t playin’ gin” calling out the violence of powerful white men controlling politics and society. Her voice tells us a story during the verses that forces us to watch a mental montage of her career.

In addition to the cigarette smoke claiming your freedom anthems, Cyrus gives us vulnerable ballads such as “Angels Like You” and “Never be Me,” where she sings about walking the line of emotional vulnerability. The soft acoustic guitar picking and airy vocals of “Angels Like You” tell us that she is letting us into a very intimate space. With this, she still upholds the theme of shocking us with her powerful vocals during the chorus where she belts “angels like you can’t fly down Hell with me. I’m everything they said I would be.” A rock album through and through, yes, but if you listen closely, the classic sounds of country steel guitar and rhythm can be found, especially in these softer tracks.

This kissed by “Bad Karma” Cyrus doesn’t give a fuck, doesn’t believe in love, and does what she wants to do. From her Instagram to her covers of rock classics, to her impressive vocals, this seems to be Miley Cyrus’s most committed reinvention, and it seems that most hope to see the mullet stick around.

Tayla Parx and creating space for yourself
Musicians