Protesting through poetry: A new method of organizing young writers in New Orleans

In New Orleans, a new social revolution is forming. Instead of protests and picketing, this one is led by youth writers using words to overcome obstacles. Student writing programs in the city have taken on a new purpose: working to teach young people methods of organizing and the necessary skills to fight racist, oppressive systems around them.

826 New Orleans is a youth program actively making a difference for students of all grade levels. Kyley Pulphus, who was recently named one of Gambit’s 40 Under 40, is the director of the 826 Writing Center. She told Gambit,“reading gives you access, but writing gives you power.” Originally established as a program called Big Class, 826 New Orleans offers programming for children of all grade levels that amplifies student voices and inspires them to embrace writing. Most importantly, 826 New Orleans fosters a sense of community for kids who are missing this aspect in school. Last year the population of the New Orleans public school system, which is made up almost entirely of charter schools, was 89.6 percent students of color and 83.4 percent economically disadvantaged students. At many of the public schools in the city, the school day begins when students enter the building through large metal detectors. Most of the schools have security officers placed throughout the hallways as well. A senior at the International High School of New Orleans told WWNO, “the security guards they have on white shirts with a badge, black slacks, and a belt with a walkie-talkie, and a gun strapped to their waist – kinda like police officers. It just doesn’t make me feel like I’m in a space where I’m welcome, and I feel like I’m in a space where I’m just supposed to be controlled.” 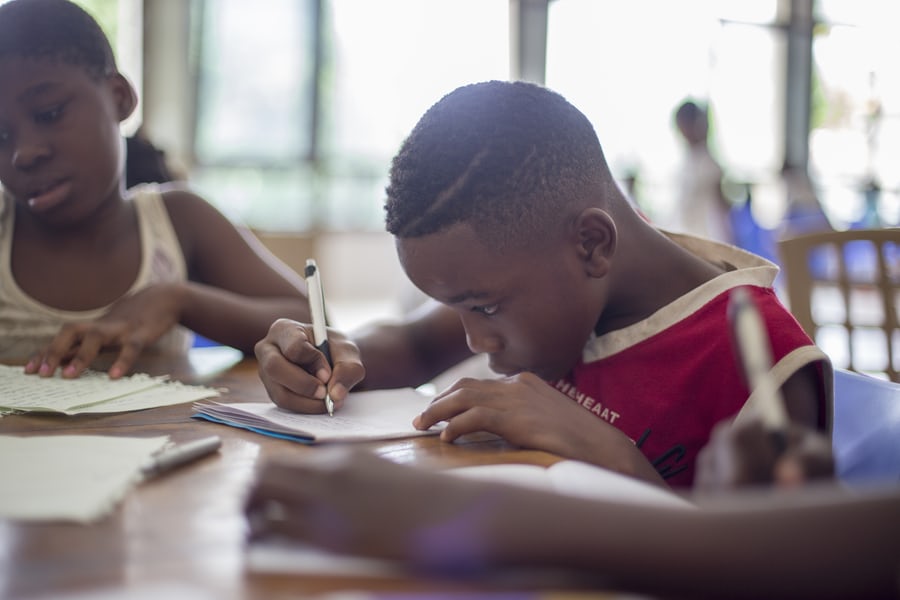 At the 826 Youth Writing Center, students can participate in different programs like after-school writing workshops; the Young Authors’ Book Project, where high schoolers can produce their own books; or the Pizza Poetry Project, which publishes student poems on pizza delivery boxes across the city. In all of 826’s programs, volunteers work directly with students to guide them in creating their work, from drafting to editing and then publishing. For the Young Authors’ Book Project, students get to compose their own stories and develop them over a six-month period, ending in the publication and distribution of their finished books. Programs like this one inspire the students to feel empowered from their writing and allows them to accomplish things that would not be possible in school. Kyley Pulphus told Gambit,“one teacher trying to get to 30 kids on a regular basis is nearly impossible. Kids with good feedback grew tremendously in a short period of time.” The kids feel this disconnect in school as well. One student at 826 explained, “I feel like I’m being constricted in school… but in Big Class I can just say what’s on my mind.”

Through these programs, New Orleans’ youth are also being taught the methods for organizing. By building a sense of community among young writers, programs like Big Class inspire the students to rally around an important cause. Another New Orleanien is building strong communities for students as well. Mwende “FreeQuency” Katwiwa is an author, poet, speaker, reigning Women of the World Poetry Slam champion, and workshop leader. FreeQuency is also a founding committee member of the New Orleans Youth Open Mic (NOYOM) and a festival coordinator of NOYOM’s Youth Poetry Festival. At the Open Mic, middle and high school aged students take the stage and perform, delivering essays and poems in front of their peers. Jasmine Janeé first performed at an Open Mic night in 2019 when she was a senior at Frederick A. Douglass High School. Since then, Jasmine has gone on to perform her poetry at many other poetry festivals and events, such as the Love Your City Gala, and was showcased as NOYOM’s feature performer in February. She even got to perform her poem “She Is A Black Woman But Why Do They Call Her Medusa?”at the Ogden Museum of Southern Art on Martin Luther King Day. Jasmine’s mom expressed her gratitude for her daughter’s experience, “thanks to NOYOM for providing my baby ‘The Jasmine Janeé’ a platform to utilize her voice to penetrate walls of bigotry; to transforms the lies of ignorance; and to instill hope to those were lost.”

The Youth Open Mic chooses outstanding artists and poets as featured performances for open mic nights, and these artists help inspire the students to get on stage and share their writing and spoken poetry. Caren Green, a local singer, songwriter, healer, and poet, was the feature at an open mic in November 2019 and was featured in celebration of National Headwrap Day. NOYOM also showcases guest performances, like the KIPP Renaissance Poetry Club, which often joins forces with New Orleans’ middle and high schools.In 2015, around 33 percent of White 8th grade students in Louisiana were proficient in reading, compared to 12 percent of Black 8th graders and 25 percent of Latinx students. In addition to featured performances, artists also contribute by leadingprograms and workshops that prepare students to participate in the festival and experiment with slam poetry. These workshops can help students with their own writing, as well as introduce them to the poetry slam experience and allow them to improve their skills. One artist, Michael Exodus Seaberry (known as Exodus, The Poet), lead a workshop called Find Your Voice Before You Hear Another’s, which helped students establish their own voice in the midst of the YouTube poets and other sensations they had studied.

FreeQuency told Gambit,“I work with young people as part of my vision of creating a world that we want to live in.” The Youth Open Mic creates an environment where peers support each other and inspires them to come together to fight for what they believe in. Cheers of “you got it!” echo throughout the room as new performers step up to the microphone. If the performer stumbles over a word or needs to restart their sentence, the roars and echoes of support only get louder. NOYOM builds a community of people may be left out elsewhere. At the beginning of a NOYOM showcase, the host states, “we will actively seek to include people of all races, genders, sexual orientations, religions, ethnicities, and abilities while being open to learning from one another across differences.” At the Open Mic, young people can learn from the activists, artists, and writers that they watch perform, and connections can be established that would not happen in a classroom setting. By becoming accepted into this community, New Orleans youth are able to learn organizational rights and are enabled to stand up for themselves and fight oppression head-on.