Summer heat: Plantation tours, what is the true history?

Editor’s Note: It’s officially summer, and we’re putting on the heat! Whether it’s places to explore to escape the humid temperatures that saturate your bones or tourist industries that need to feel the fires of truth, we’re looking at it all for this series. That’s why we’re taking a deeper look at plantation tours.

If you were to google what to do in New Orleans, Trip Advisors fourth suggestion for day trips is to visit various plantations in the surrounding area.  On neworleans.com, the official tourist website of the city, there is a page dedicated to these plantations, describing them as “Beautiful mansions and grounds deserve to be explored.”  These extravagant and whimsical estates may appear to show off the beauty and nature of the Louisiana swamplands, but one might ask, what is the implications of promoting this falsified beauty on these sprawling properties?  Are these plantations truly beautiful in their looks and their history, or is it romanticizing a history full of slavery? 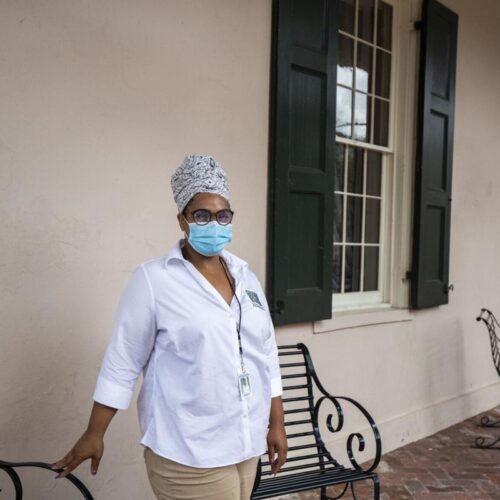 Jessica Smith, an African American tour guide at the Oak Alley Plantation and decedent of slaves (Photo by Sophia Germer)

As slavery was abolished, these plantations were left for the owners and their families to upkeep.  Many have turned to tourism as a source of income for these grand properties but neglect to inform their customers on the horrific injustices that took place on these plantations.  Jessica Smith, an African American tour guide at the Oak Alley Plantation, described the façade created by these plantations to Nola.com, mentioning that even the representation of slave clothing was embellished.  “I can tell you right now, my ancestors didn’t wear dresses like that,” she notes.  Even as an employee to the plantation, Smith has received many racist comments, including questioning her credibility and relatedness to the slaves of the former plantation.  In an article written by the same publication, notes that “a lot of plantation homes are presented today like ‘weren’t these the good ole days,’ which ignores the realities and reinforces clichés that still exacerbate racial tensions.” 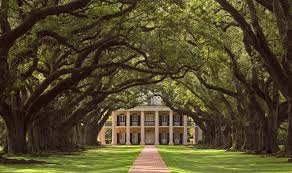 The tree avenue lining the walkway to the main plantation house from the Mississippi River, on Oak Alley Plantation (Photo by Michael Guion).

Like Ms. Smith describes in her experiences as an Oak Alley employee, the lack of transparent history that occurs on these plantations today, glorifies the extreme abuse inflicted upon the enslaved.  Oak Alley Plantation being the most distinguishable and visited plantation in Louisiana, goes a step further with their insensitivity by hosting wedding ceremonies and holiday events, operating a restaurant and inn on their property, and frequently inviting Hollywood to use their property as a backdrop to their fictional productions.  Most notably, productions like Days of Our Lives, Midnight Bayou, Interview with a Vampire, Primary Colors and a Beyoncé music video, chose Oak Alley plantation as a location to reinforce the fictional tale they were trying to portray in their productions.  Within the television series, Days of Our Lives, two characters, Bo and Hope, are seen using Oak Alley Plantation as a venue to their wedding.  The two characters throughout the 1983 series, have a fiery relationship, but finally channel their shared by celebrating the love they have for one another.  In the episode, the plantation is decorated and embellished to highlight the lighthearted and romantic tone the plotline has, disregarding the hard truth of the location.  Ironically, both Hollywood and the owners of Oak Alley Plantation are promoting this fictional façade seen in their fabricated plotlines and lack of historical transparency.

When supporting these types of historical institutions, it is essential to consider and share their negative history, as it would provide many with perspective.  The question is raised, when historic tourism is presented to the public, are all perspectives and truth being told to those who are introduced to these sites?  Whilst these plantations play a pivotal role in explaining our countries history of racial inequality and mass enslavement, glossing over the negative aspects of these historical sites demoralizes the discriminations slaves endured.  Also, while disserving customers who are ignorant to the once abusive environment.  Furthermore, current owners reap the economic benefits of these plantations, based on a false and glorified history.  It is essential for tour guides, events, and representations of these institutions to act as though they are unbiased journalists in the media, portraying a news story.  Storytellers, tour guides, administers, and producers must widen their lens by acknowledging all historical participants and events, otherwise there are doing an extreme disservice to their viewers.

By not acknowledging the way in which slaves were treated, it inadvertently supports the abuse and racism that occurred many years ago.  This exploitation has festered and engrained its way into our culture, seen through the systematic racism and injustices of our world today. When supporting these historic institutions, it is essential to consider and share the full narrative of these plantations, as many would gain a broader perspective of the systematic struggles black Americans have suffered throughout our countries history.