Editor’s Note: Taking a page from David Foster Wallace’s “Consider the Lobster,” writers in Kelley Crawford’s Alternative Journalism class at Tulane University chose objects that are rather ubiquitous. Then, they dove into the symbolic narrative those objects tell. Up first in the “Consider the _____” series is the bucket. 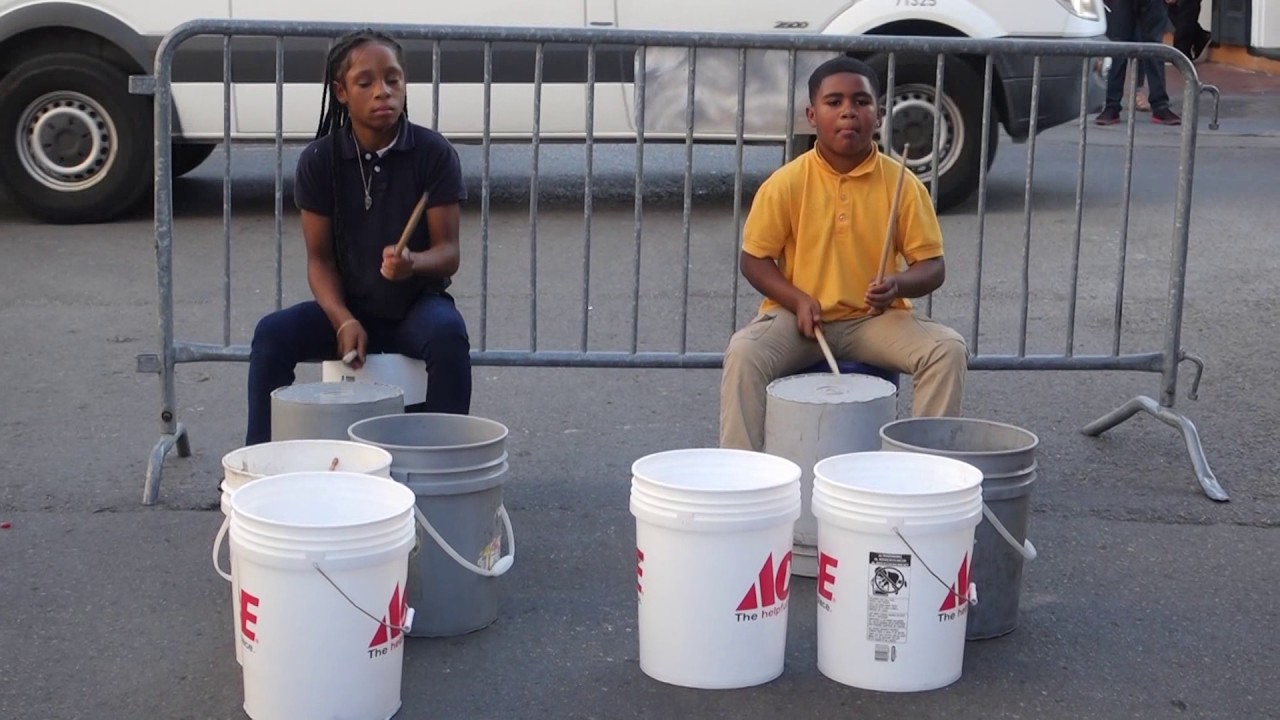 The bucket, which is typically conceptualized as a vertical cylinder with an open top and flat bottom, exists in many forms and is used for a variety of purposes. The traditional bucket can be found in the average household shed, as well as the agricultural and construction industry, where it often serves a purpose of carrying water, soil, and other granular products. In the fashion industry, the bucket comes in different colors and sizes in form of designer bucket bags and sporty bucket hats. In separation from its physicality, the bucket has infiltrated schools of thought and theory within economics and psychology, and has permeated the English language in the form of phrases such as “kick the bucket” and “bucket list”. Even music features the bucket, where in the French Quarter, it is played by street musicians as an alternative to the traditional drum. But for many of these street musicians, the bucket’s purpose is not to play and create music, but a means of survival.

Bucket drumming is just one of many types of street performance offered in the Quarter. Unlike the soloists and bands who are hired to perform at venues such as the House of Blues or Gasa Gasa, street musicians rely solely on the generosity of their sidewalk audiences to make a living. Competition among street musicians for tips in the French Quarter is fierce, and experience and talent do not necessarily guarantee a profit. In fact, according to a 14-year-old bucket drummer named Darius Lindsey, being young and cute can earn you just as much, if not more, than being talented. “I got tips for being cute. It was a lot of tips.” Kids can spend the money they earn from bucket drumming on things such as school uniforms, clothes, candy, video games, etc. However, some children are forced to bucket drum as a means of providing income for their families.

And this is not a new phenomenon. 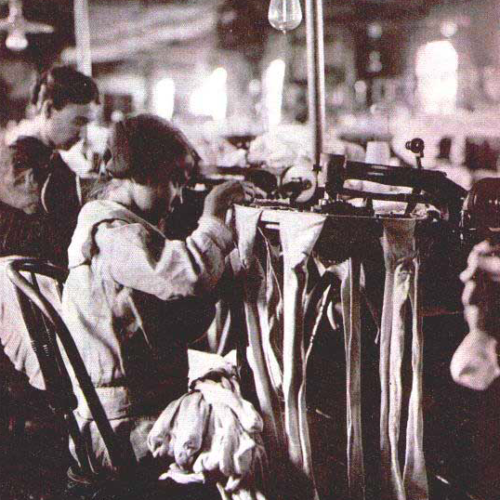 Child labor in America can be traced as far back as the founding of the 13 colonies in 1607, but it reached its peak in the early 1800’s during the Industrial Revolution. Children oftentimes worked with heavy machinery and were exposed to toxic chemicals in cramped, overcrowded spaces that offered little/no ventilation or sunlight. Injuries and dismemberments in factories were commonplace, and children who worked in coal mines were at risk of being killed in gas explosions or buried alive. These children tended to be the sons and daughters of poor parents or European immigrants who depended on their children’s wages for survival. National outcry for social and legal reform during the early and mid-20th century eventually led to heavy restrictions on child labor and improved workplace conditions. Under the Occupational Safety and Health Act (OSHA), employers are now required to provide properly serviced equipment, install warning systems to alert employees of potential hazards, retain records of workplace incidents and injuries, and continually inspect the workplace.

While the enactment of the OSHA led to tangible improvements in workplace conditions and increased employer accountability, the regulations and protections guaranteed under the OSHA do not apply to bucket drummers, as street performance is not considered an official occupation. Oftentimes, child bucket drummers are left alone handling anywhere between $100-$400 in the same environment where tourists are warned to not flash cash so as to avoid being robbed or mugged. Bourbon street is a known hotspot for child sex trafficking–of the approximate 6,800 runaways reported in Louisiana each year, two-thirds will be approached by a pimp within their first 48 hours of being on the streets. The most coveted spot for a bucket drummer is directly outside a bar, as heavy drinkers are the best tippers. But heavy drinkers also tend to be more aggressive and prone to violence, as alcohol lowers inhibitions, impairs judgement, and increases emotional reactivity.

Prior to the enactment of the Fair Labor Standards Act (FLSA) in 1938, there was no minimum age requirement for children to begin working. Children were often hired not just because they could crawl into the tight spaces that adults could not fit, but because employers could get away with paying children significantly less than their adult employees. In fact, there are estimates that children’s wages were only 10-20% of that of their adult coworkers. The enactment of the FLSA established both a minimum age-requirement as well as a baseline minimum wage. However, because street performers are not technically employed, these regulations do not apply to bucket drummers. While Louisiana law prohibits children under the age of 14 from being employed, technically, a 5-year old whose parents want him to bucket drum for profit is legally allowed to do so, so long as the child can provide a permit upon request. In addition, profits made from bucket drumming rely completely on the audience’s generosity. Depending on the size of the crowd, a child can make $100 during a single performance, and experienced bucket drummers may make upwards of $300-$400 a day. Compared to a minimum wage job, which in Louisiana pays $7.25 an hour, an experienced bucket drummer could work his/her way up to a $25-$30 per hour payrate. However, these profits are atypical and unlikely. Part-time, rookie bucket drummers may only make $15-$30 dollars in one day. 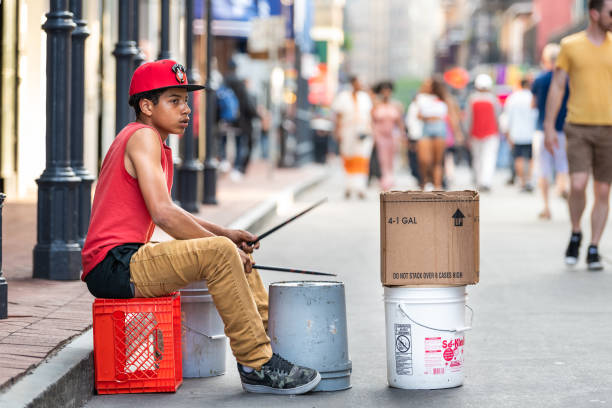 In addition to regulating workplace conditions, enforcing a baseline minimum wage, and establishing a minimum age requirement, the FLSA was implemented to protect and promote youth education. Because there were no limits on the number of hours employees could work in a day, employees often worked as long as 14 hours a day, 7 days a week. As a result, children were forced to drop out of school, creating a vicious cycle of generational poverty. Today, Louisiana’s strict school attendance and drop out policies are designed to keep children in school for as long as possible. Children cannot legally drop out of school before the age of 17, and if a child racks up 5 or more unexcused absences, the parent is called by the school and brought in for a parent-teacher conference. While these policies do prevent children from skipping school to bucket drum during daytime hours, it is of little consequence because the most profitable hours to bucket drum are from 5-10 p.m. After combining the hours spent in school and the time spent bucket drumming during the evenings, a child may have as long as a 16-hour workday.

While profits earned from bucket drumming may be used to supplement family income, for some children, profits earned while bucket drumming may be used to pursue a higher education. For others, the experiences and skills gained from years of bucket drumming may be a pathway towards stardom. Historically, some of the most well-known names in the jazz community, such as Louis Armstrong, Uncle Lionel Batiste, and Derrick Shezbie, all started their careers on the streets of New Orleans before making their ways into the spotlight. More recently, New Orleans local Darius Lindsey gained national attention after he was discovered in the French Quarter by Questlove, the drummer for the Grammy-winning hip hop group The Roots. Since Questlove’s Instagram post of Darius bucket drumming went viral, Darius’ bucket-drumming talents have been featured in 3 films, 2 television shows, and 1 commercial. While Darius’ discovery and success was a combination of sheer luck and talent, his story and achievements offer hope to children who envision a future not on the streets, but on the stage. And to think it all began with the 5-gallon plastic bucket, an item so cheap it only costs $3.25 at the local hardware store.

Lindy Boggs: “She’s the only widow I know who is qualified, damn qualified, to take over”
Extra/ordinary