Newcomb Art Museum’s current show,  “ Supposed 2 Be Here,” poses several questions, not limited to, what qualifies as art. Is all art beautiful, and should it be meaningful? What form can it take? Who is allowed to produce it and where does it belong? The show explores four different takes on inclusion and identity drawn across notions of art, race, place and accessibility.

Brandan “BMike” Odums, who emerged post-Katrina as a social activist, using public art as his medium, is showcased in the museum on the former women’s college campus founded in the liberal arts. One might wonder if Odums’ first solo exhibition in a museum setting was not “supposed to be” since the forces of nature have seemingly conspired against it. Opening on Jan. 18, 2020, the exhibition was closed several months due to concerns about Covid-19, reopening to the public only last week. “ Supposed 2 Be Here” is now open, free of charge and by appointment until December 13.

Newcomb Museum pays tribute to the creative legacy of Newcomb College, whose art students were outsiders themselves. The now famous Arts & Crafts pottery was designed by women, 1895-1940, although the potters who worked the clay, threw the pots, fired the kiln and handled glazing were men. The pottery design was intended to serve as a potential livelihood for many graduates at a time when women usually did not work outside their homes. “We are all products of the people who came before us,” Odums says.

“The systems that we live in are the byproduct of someone’s imagination and now it’s going to take some type of imagination to get us out of those systems,” Odums says.

The exhibition follows his artistic evolution, attending New Orleans Center for Creative Arts (NOCCA) and studying film and video at the University of New Orleans. Later, as a camera operator for New Orleans Public Access Television (NOATV), he was exposed to important social and political issues of the day, which he credits as his “real life civics class.” In 2005, he founded 2-Cent Entertainment — a hip-hop oriented, grassroots, entertainment company that addressed problems in the community. 2-Cent created videos, “using the camera as a tool, as a weapon,” employed pop culture as a vehicle for positive change.

In 2008, Odums and 2-Cent Media produced “New Orleans for Sale,” a nationally recognized short film that argued Katrina-ravaged neighborhoods were victimized by the tourism industry to generate profits. In 2013, Odums gained more attention after illegally painting murals throughout the flooded and abandoned Florida Housing Development Project.

During Prospect 3, 35 artists took over Degaulle Manor, a 360-unit apartment complex on the West Bank that had been empty since Katrina, drawing 30,000 visitors. Street art appealed to Odums because it was accessible to the nearby residents. He began painting murals and portraits of people that mattered to him, including civil rights leaders, musicians, personal mentors, family members and friends.

At Newcomb Art Museum, his portraits include Black leaders such as Dr. Cornel West and W.E.B. Du Bois, grandparents, colleagues and bible subjects, as well as heroic action figures. A fan of comic books, Odums examines what it takes to be a hero. Basic survival today requires heroics. Super powers are required just to exist and do the work of democracy to make the world a better place, he says. “Heroism does not require a cape.” 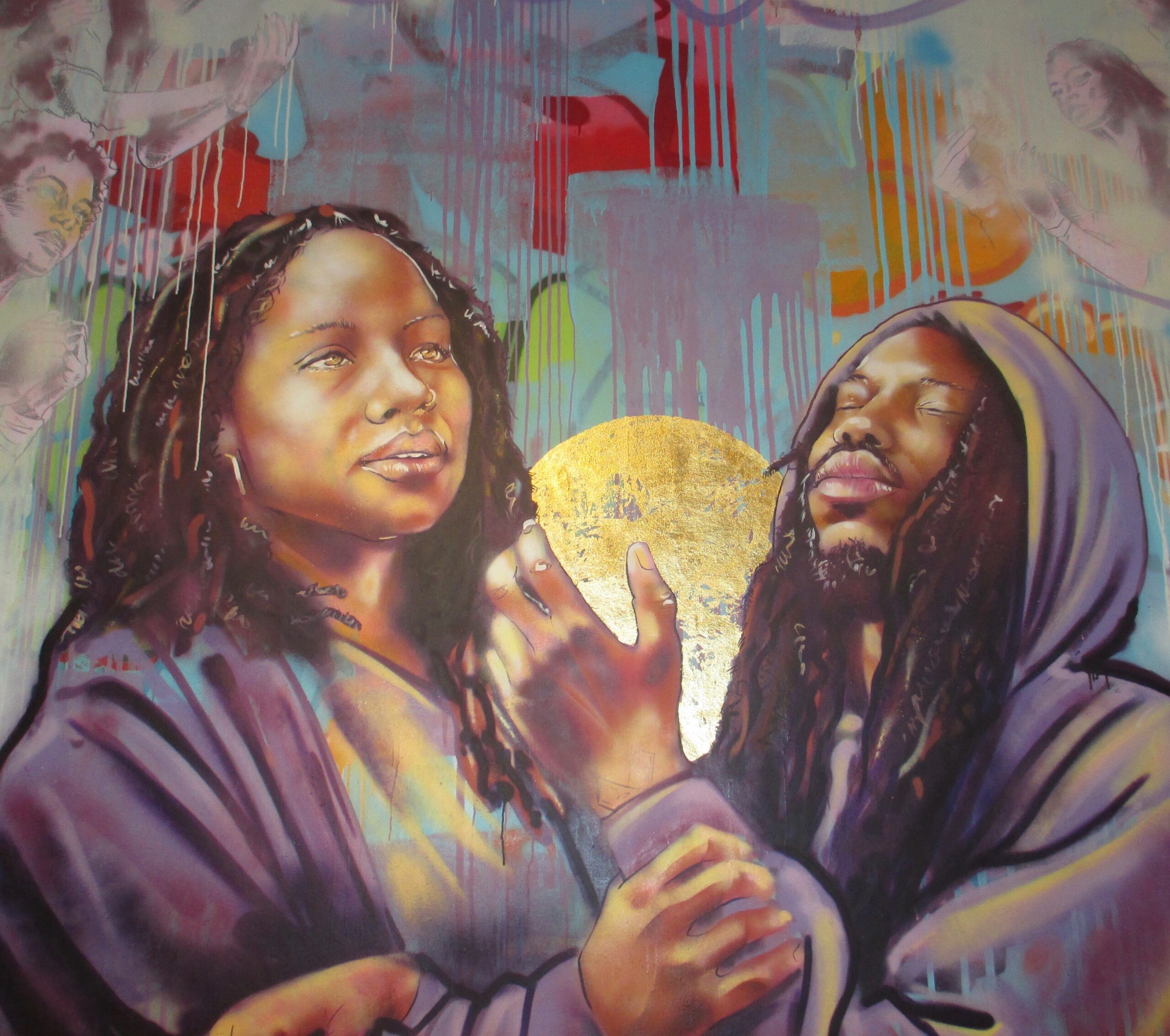 “John the Baptist” by Brandan Odums

The exhibition’s centerpiece is an enormous painting, Family Tree, showing a boy in the position of flying, lifted up by many hands. We may believe we are successful on our own merits, but Odums, who has researched his genealogy, credits preceding generations, post-enslavement. “You are where you are because of the sacrifices of those that went before you.”

Radical imagination is required to see beyond where we are to have hope beyond the horizon, he says.

If “ Supposed 2 Be Here” closes before you can get there, Odums’ Bywater museum, Studio BE, located at 2941 Royal St., is open Wed.-Sat., 2:00-8:00 p.m. Its show, Ephemeral Eternal features larger-than-life murals and room-sized installations focusing on the intersection between art and resistance.