More than a decade after renaissance-man Donald Glover initially experimented with his musical alias Childish Gambino back in 2009 with gritty rap mixtapes, he graces us with his fourth and most recent studio album, 3.15. 20. The fifty-seven-minute album was dropped without warning on 3/15/20 to Gambino’s website donaldgloverpresents.com, only to be taken down and “properly” released a week later on streaming platforms. With the album art amounting to a white square and song titles representing the time at which the track starts in the album, he entices audiences to dive in. Not to be disappointed, Gambino gifts us an album in a time of revolution that was meant for heavy unpacking, leaving audiences feeling the duality between a grim reality and love for the present. The narrative on 3.15.20 uses lyrics that expand across multiple genres to express the black experience in an experimental way, daring listeners’ to let the sound speak for itself.

The album opens to “0.00,” an intro track that manipulates frequencies and synthesizers to make one feel like they are drifting in space, inviting both listeners and Gambino himself into an immersive healing experience. “Algorhythm,” a very tech-oriented track, is one of only two songs on the album that is named rather than timestamped. Gambino relies on heavy spoken word with distorted vocals to highlight his vision of the present corrupted with human robots. 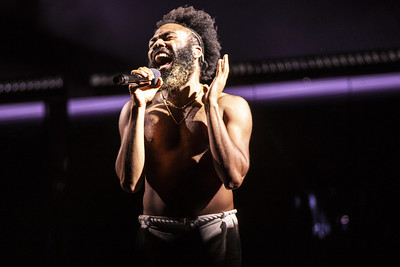 Gambino soulfully invites audiences to belt out his new tracks with him at a performance in Manchester, Tennessee.
(ctto: Dan Garcia)

The track critiques that there is an “Algorhythm” that influences people’s behavior simply because they see it online, suggesting that in this decade people do not properly think for themselves. While the vocals of the track are warped sometimes past recognition, the catchy pop sound of the chorus leaves the line “Everybody, move your body, now do it/ here is something that’s gonna make you move and groove” stuck in listeners heads, forcing at least a head nod and a foot tap – highlighting exactly the message Gambino hopes to get across. Packed with satirical messages about the state of the world–specifically the plague of racism–Atlanta native Gambino writes the line “I dream in color, not black and white”, criticizing the concept of overt “colorblindness”, by speaking power to the black experience during the crisis of anti-blackness in America.

While Gambino clearly has a point to make in the first two tracks through synthesizers and distortions, the third track, “Time”, completely catches listeners off guard if they expect the rest of the album to mirror the initial tracks. Even with the heavy production backing, the intoxicating melodies from both Gambino and featured artist Ariana Grande paired with the dreamy filter on the guitar create a serene space to question our place in the world as they duet about running out of time. In the funkier “12.38”, featuring rapper 21 Savage, INK, and soul singer Kadhja Bonet, Gambino embraces his NYU writing roots to remind us of his past works that summoned so many listeners, such as “I. The Worst Guys” on his 2013 album Because the Internet. As he raps through a tale about a trip on psilocybin with a girl he questions his love for, the sound of Gambino’s comedic past shines. His witty lyrics, vocal range, and psychedelic soul beats take listeners on a journey into Gambino’s reality. He nods to black creatives who have influenced him throughout his life: actress Tracee Ellis Ross and author N.K Jemisin, and R&B/ soul singers SZA, Chaka Khan, and Toni Braxton. He even goes on to mention bell hooks’s 2001 work titled All About Love, speaking to the audience about love in a modern-day society, stressing the importance of compassion and unity. While the majority of the song makes us feel like we are on a date with Gambino, the verse from featured artist 21 Savage stops this love affair with harsh bars to make us question the reality of our world, checking Gambino and forcing him back to earth. He raps “The police keep harassin’ ‘cause I’m rich and I’m black/ they mad ‘cause I made myself a boss without crack,” directly referencing the ongoing Black Lives Matter movement, specifically the disproportionate rates at which black people are murdered by law enforcement. “12.38” serves listeners, setting the rest of the album up for more commentary on the scared yet proud experience of being black in America and what it means to Gambino.

Transitioning into a faster-paced track featuring 808s and bouncy soul beats, Gambino explores the beauty of blackness on “19.10”. He shares the wisdom of his father when he recounts: “You’re so gorgeous/ nothing’s really worth your time/ but someday soon you might find/ the truth about the world’s design”. Further in the song, Gambino sings to us with a high pitch “to be beautiful is to be hunted”, using a soothing and stressed voice to refer to the harrowing persecution of black people in America embedded in the nation’s very structure. Another track reminiscent of his past work “Redbone” from his 2016 album Awaken, My Love!, “24.19” uses neo soul and p-funk with raspy vocals to further entrance us with melodies about love with sounds that cannot fit in a box. It’s a track of admiration and gratitude, working to unite listeners through inspiration, rather than a Gambino-esque track of rage and anger such as “32.22” aggressively fuses house music with loud and distorted drums creating industrial hip hop to intensify the moment.

While much of Gambino’s album is centered towards a black experience, for black listeners, with traditionally black styles of music, his attempt at unification comes from “35.31”. Gambino effectively mixes hip hop and country to draw people together from under the constraints of oppression. If Gambino is an expert at using computer sound technology, then “39.28” is his proof he can master a take at acapella featuring smooth piano. Referencing his short film Guava Island, set on a fictional island to convey the forces of capitalistic oppressions, we’re left with a passionate and candid piece depicting the outcomes of falling victim to the forces of capitalism. In a way to counter this raw take, Gambino follows with “42.26”, again creating a sanctuary of psychedelic soul to talk about another grim reality: climate change. With a consoling voice, Gambino layers beachy instruments with sound bites of birds to transport us to his world where he recognizes all the beauty around him. Following with more sincerity drawing audiences closer, he features audio from his son on “47.48”. Conveying the importance of living in the present with layered harmonies behind the experimental funk sounds make one want to slow dance despite the message the lyrics give off. As Gambino serenades us slowly “Little boys playing ‘round, shot down/ the violence, the violence”, the contradictions draw the audience in even more, singing distressing lyrics with a heartwarming instrumentation as he goes on to leave us with a message of hope “Don’t worry ‘bout tomorrow”, urging us to not take anything for granted. As Ann Cvetkovich would describe as an “archive of feeling”, Gambino permanently solidifies his canonical influence in this moment in history as one of despair and passion (Cvetkovich 2).  Leaving audiences full of emotion debating the realities of 2020, Gambino gives us an album that cements the trauma and healing of this point in time forever. Gambino uses his personal construction of the present to help cope with the strive surrounding him.

As the album concludes with “53.49”, Gambino leaves us with messages of tenderness as he sings and raps over Funkadelic-esque sounds, singing “there is love in every moment”. My personal favorite of Gambino’s ever, he mixes funk, hardcore rap, and harmonious soul to prove he knows how to finish an album. In a record filled with messages of today’s struggle in America, Gambino shines through with love. With grim realities crashing down around us, Gambino offers listeners an original take at the violence against black bodies by providing us with a lasting effect of tenderness and legitimacy. Intertwining hip hop, nu jazz, classical music, rhythm and blues, gospel, and a splash of 80’s pop solidifies the album as an immersive creative experience. As a comedian, actor, writer, director, producer, singer, songwriter, rapper, and DJ, Gambino utilizes all of his talents to offer his listeners a vector to hear about the black experience in America with the raw and untouched emotions on 3.15.20.

Jackie Venson and the lure of dystopia: Album review of Jackie the Robot, Vol. 1,
Music