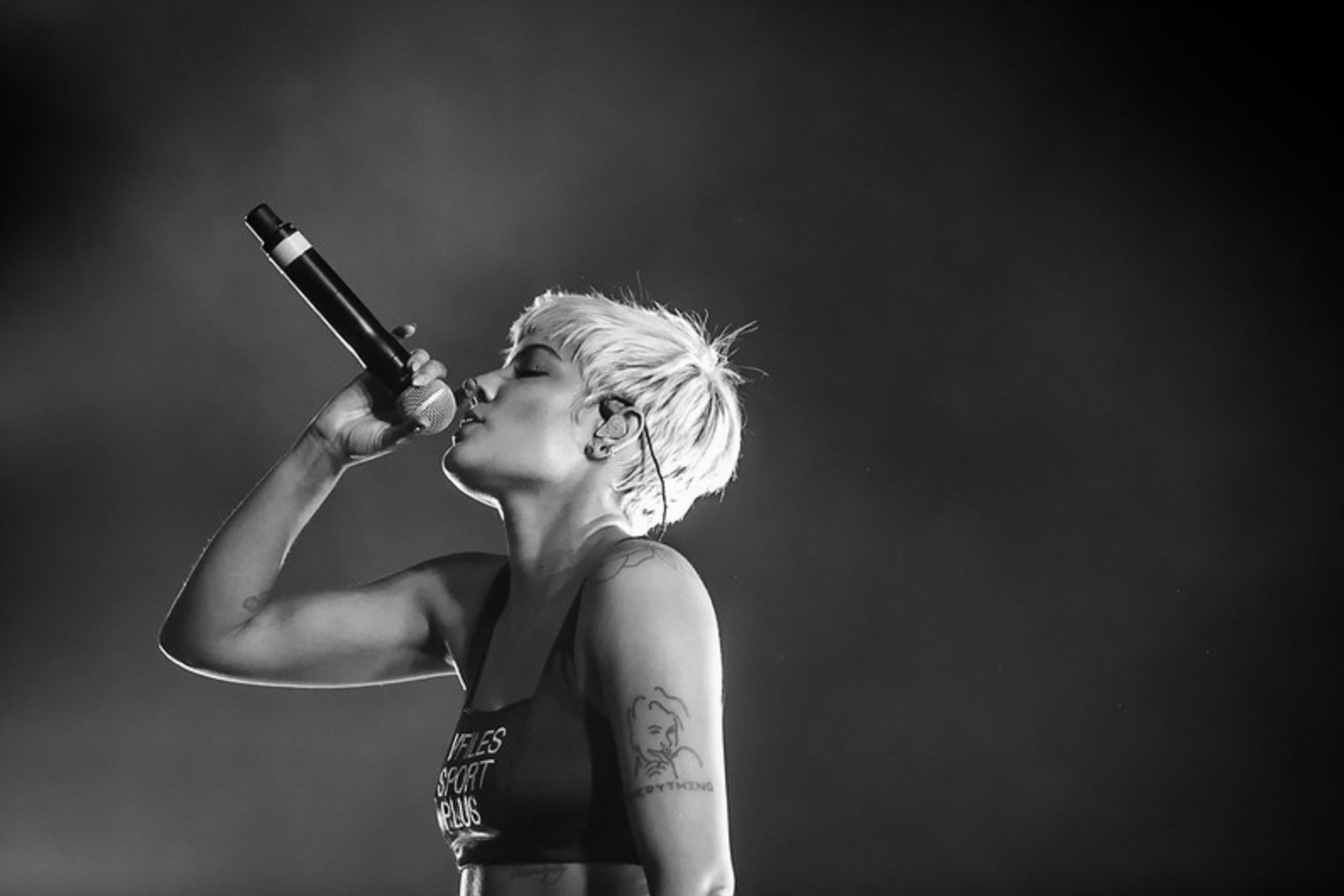 Halsey’s newest album, Manic, is a celebration of her mania and an homage to her journey through heartbreak, loneliness, and healing. The album is a sampling of “hip-hop, rock, country, fucking everything,” with features from Dominic Fike, Alanis Morissette, and South Korean rapper Suga of BTS. While the album may initially sound like a random collection of songs, it is a complete body of work produced during a manic episode of bipolar disorder. Unlike her previous albums, Badlands and Hopeless Fountain Kingdom, which were written during depressive states, Manic is an album created by and for Ashley Frangipane, offering a heartfelt and personal window into her life.

After being diagnosed with bipolar disorder at 17, Halsey spent most of her senior year of high school in a psychiatric facility. Since finding music, she has been given the tools to properly express herself and explore her cyclical emotions. Now, at 25, after spending years in therapy, Halsey is able to recognize when she needs help. When she released her second album, Hopeless Fountain Kingdom, she began to feel elements of her adolescent struggles bubbling up again and alerted her team. Her personal mantra is a reflection of her mental health journey that, “Achieving mental health doesn’t happen. You never arrive at mentally healthy. It’s a perpetual journey that takes constant care, attention, and energy” (Halsey, 11:25).

Through Manic, listeners are offered a chance to understand Halsey’s complex and emotional journey through mania in a safe and educational space. The album begins with “Ashley,” a comfortable entry point in her introspective journey. By using her birth name as the title of the song and not the name she created for the stage, it is clear from the outset this is a very different version of the singer people have become familiar with. Until this point, Ashley hid behind the character she created, Halsey. She is painfully coming to terms with her true self, singing, “Took my heart and sold it out/To a vision that I wrote myself/And I don’t wanna be somebody in America/Just fighting the hysteria/I only wanna die some days,” in a robot-like fashion with almost no background noise before belting the next lyric as if she is losing control. While realizing her time on Earth is finite, she is accepting the choices she has made thus far to make peace with the manic side of herself. The track ends with audio from one of Halsey’s favorite films, Eternal Sunshine of the Spotless Mind. The antiheroine, Clementine Kruczynski, says, “I’m just a fucked up girl/Who’s looking for my own peace of mind/Don’t assign me yours.”

The audio is a flawless transition to her next track, “clementine,” which is also a nod to one of her biggest influences, Clementine Kruczynski. In the film, Kruczynski is a strong woman that embraces her nonconformity. Seeing such a liberated woman on film inspired Halsey to build her entire personality on Clementine’s character. Originally released as a single, “clementine” is a stripped track, driven by simple piano chords and the clattering percussion of what sounds like a drumstick being struck against the steel shell of a drum. In the song, listeners hear two voices. The first voice is Halsey, who remains calm and collected while performing. The second is Ashley, who is impulsively screaming in an attempt to silence Halsey. In “clementine,” Halsey states, “in my world, I’m constantly, constantly havin’ a breakthrough/Or a breakdown, or a blackout,” while Ashley cackles in the background. As only the second track in a 16-song record, Halsey is introducing herself as the antiheroine, or the anti-popstar she identifies as, who refuses to be pigeonholed to one genre and succumb to the expectations of being a female popstar.

In her single “Graveyard,” which feels most similar to Halsey’s trademark pop sound, she captures the desperation she feels on a daily basis. With a rhythm that simulates a rising heartbeat, Halsey states she was prepared to follow her toxic lover “all the way to the graveyard” until she developed the resolve to remove herself from the destructive relationship. She has previously discussed how difficult it is to maintain relationships as someone with a cyclical mental health disorder. But in a piece so autobiographical as Manic, Halsey is mostly discussing the relationship with the different versions of herself, specifically the manic side.

Halsey pays tribute to idols such as Lady Gaga, Shania Twain, Christina Aguilera, and Carrie Underwood in “You should be sad,” a country ballad inspired by “Before He Cheats,” followed by a feature from Alanis Morissette, an LBGTQ+ inspiration to Halsey. In “Alanis’ Interlude,” Halsey sings “Your pussy is a wonderland/And I could be a better man” and “Cause he and she is her/And her and he are loved.” The song is a playful reference to John Mayer’s “Your Body is a Wonderland” and subverts conventional gender norms. Although the song is about women loving women, Halsey expresses her inability to feel the differences between genders by lowering her voice to make it more difficult for listeners to decipher whether a man or woman is singing.

Throughout Manic, Halsey allows herself to be vulnerable and tells an authentic story of love, heartbreak, loneliness, and healing, which all come to a head in “Still Learning.” She sings, “But I’m still learning to love myself/I’m still learning to love myself/Oh, I try and I try to remember sometimes.” The song is a reflection on her past and her ongoing journey to true self-acceptance. She also repeats previously referenced ideas with “You think I’m swimmin’ in green/But it’s passed around my family tree/No man really wants to commit.” Although Halsey is a wildly successful singer, songwriter, and performer, she financially supports her entire family. But the idea she returns to for the umpteenth time is her struggle with relationships. Due to self-sabotage or the inability for her partners to support her during an episode, her relationships always fail. In addition, it is her relationship with herself that is the most complicated. Throughout the album, she is fighting for self-acceptance, which includes her manic self. Manic is ultimately a celebration of her mania because Halsey struggled with that part of herself for so long. She considered the manic girl irresponsible, untrustworthy, unreliable, and too loud; however, the manic girl is also whom she owes her successes to because she is the most compassionate and most creative while manic.

The album was released on January 17, 2020 as a love song to Ashley, but is also a statement on mental health and the LGBTQ+ community. As a bisexual, bipolar, and androgynous figure, Halsey has endured her fair share of trauma. Over the years, she has disclosed her abuse, mental health struggle, and drug and alcohol addictions. She has experienced homelessness and living on the fringes of society. And before she found music to channel her energy and trauma, her mental health struggle was much greater. As a member of the LGBTQ+ community and a bipolar person, the histories of her people have been plagued by trauma. For Halsey, her “trauma serves as a point of entry into a vast archive of feelings, the many forms of love, rage, intimacy, grief, shame, and more that are a part of the vibrancy” of her music (Cvetkovich, 7). Her songs are a window into her past and a celebration of the histories of her communities. “Alanis’ Interlude,” has been named a queer anthem, and Manic as a collection is an example of the complex emotions felt by someone with a mental illness. Although progress has been made, mental illness is still largely stigmatized, especially for women, who experience mental illness at a greater rate. The LGBTQ+ has recently experienced additional traumas, such as rollbacks on healthcare and the merciless killings of several black trans women.

Although Halsey’s journey will never be complete, Manic has aided in her healing process.  Manic pushed Halsey to dive deep into the parts of her that were not yet healed and forced her to love every piece of who she is and every mistake she has ever made. Manic is her most raw, honest album to date that wrestles with issues of self-loathing, regret, and all the emotions between. Her heartfelt and meaningful album was written as a love letter to her manic self, whom she learned to embrace by creating Manic.

Jazz Henry: Portrait of an artist
Musicians
3.15.20: Gambino’s State of the Union