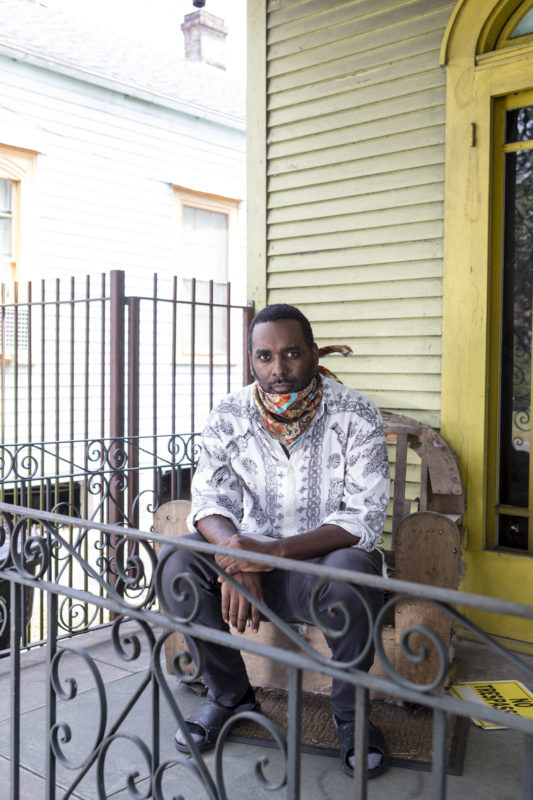 Walton in front of his New Orleans home.    Photo by: Amber Ford

As the common saying goes, “write what you know.” John Isiah Walton, a native New Orleanian, is just one example of someone whose hometown experiences are reflected in his art.

For those working in a creative industry or who make a living based on what creative work they produce, being original is everything. This creativity or inspiration can come from anywhere, but oftentimes it comes from the artist taking personal experiences to shape and define their art. For many creatives, the city in which they live and their experiences as a community member can not only shape their personal lives but their art as well.

Walton, now 35 years old, originally wanted to be a comic book artist. He only took his first painting class to get high school credit, but after receiving positive feedback from teachers and friends on a painting that “wasn’t even dry yet,” he decided to make painting a full-time job with work exhibited in Los Angeles, New York, and Tokyo galleries. His paintings, somewhat influenced by Basquiat, are characterized by fast brush strokes and “stinging social commentary.” For instance, his Zulu portraits feature American politicians in blackface similar to that worn by the Krewe of Zulu.

“I really felt like I needed to not do paintings of a carriage, some plants, or people playing instruments. I needed to catch people robbing restaurants or a building burning down… I had to depict the real going on because it can always be swept away,” Walton said.

For example, Walton did one painting entirely focused on potato chip bags. “You go anywhere in the world and you’ll see litter,” said Walton. “But in New Orleans there’s a certain type of litter. The grass is so wet, it’s one of those messy cities. I just try to catch everything… I catch my own vision of what it was for me to be here.” For Walton, this type of creativity and drawing from grounded, personal experience is what separates him from the rest of the pack.

“It’s all about making it your own… the struggle forces you to be creative.” Walton has had to forge his own path by running his Instagram account and making connections with art curators to make a living. Through Walton’s constant ability to adapt and stay true to himself, he is able to make art as lively as the city he calls home.