Times are trying. The Coronavirus has forced us to question all the elemental aspects of a society we thought we knew, but it has also shown us the immense adaptability that we possess as humans. The interesting reality of a disastrous disease with no known antidote is that all parts of our lives are being affected, including sex.

To the couples lucky enough to undergo this seemingly endless COVID-19 quarantine together in the same home, enjoy. We look forward to the impending baby boom that you all have the chance to participate in, coming sometime around January 2021 (Yes, I counted out those nine months on my fingers; it’s like clockwork people!).

For everyone else, all the singlets and physically separated spouses with barren beds and desolate dreams, this stay-at-home order has brought forth a prolonged reliance on alternative means of sex. Masturbating, consumption of online pornography, use of sex toys, and virtual/video/phone sex are all extremely prevalent as we enter our however-many-weeks of isolation, but where will the world of one-sided sex wander next? Is this shift toward sex an opportunity to explore new avenues of one’s own pleasure through the use of electronics (and in the safety of one’s own home) just a form of foreplay for the ultimate peak in cybersex: the sex robot? And despite the obvious concern that shrouds a technology boom such as this one, could these bots that bang be good for us? Regardless of whether you are getting laid or just plain laid off during this worldwide pandemic, it pays to think about the possible societal impacts of introducing sex robots into regular life.

Doge’s reaction to sex with a robot. A meme. by Hope Abbott

Even though there is another body added to the equation when having sex with a robot (in other words, the human no longer has to perform the sex acts to themselves), a sex robot is merely an outward artistic expression of the person who configured it, thus retaining the masturbatory nature of the product.

The latest bots are completely customizable, and companies like AI Robot Companions allow their customers to take complete control over the creation of their companion, from the placement, shape, size, and color of a nipple all the way down to the color of its toenail polish. Men and women can reach into the deepest corners of their darkest fantasies to craft something they are wildly sexually attracted to, or they can simply design it after the ex-lover with whom they yearn to share just one more intimate moment.

Every sexual encounter with the robot can be hand-programmed and personalized to its owner. The only limit is one’s own imagination, and therein lies the beauty: it’s their choice, and for once (and for the rest of forever), they can have sex with exactly who they want to have sex with, however they want, and consent from another living being is not required for this to happen. 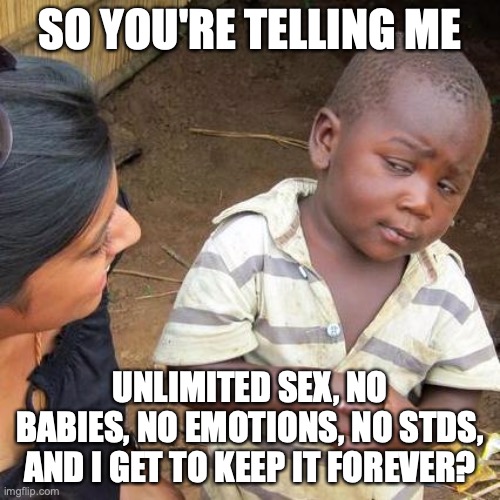 What’s the catch? A meme by Hope Abbott.

Dealing with more than just consent, sex robots also eliminate several of the other common concerns associated with participating in sexual intercourse. Think about this as the human half of a bionic relationship: no accidental babies (it is biologically impossible to conceive with or as a robot, though maybe not for long), no risk of infection with STDs or STIs (unless people go and start sharing their robots, yikes), and no untimely break-ups or emotional discord that can leave you sexless for some amount of time (you own the robot…if it does somehow manage to hurt your feelings, you can literally throw it away).

Regardless of the gender one prescribes to or the sexuality he or she identifies with, the possible advantages of robotic sex are real. Despite coming wrapped in an ominous facade, the Coronavirus has brought positive change; much like it has enhanced the creativity and mindfulness of those it has encountered, sex robots could unveil a new realm of sexual and social awareness and expression in the people.

Coping with corona: Oversharing during COVID-19 has evolutionary merit
Health

Want to do it during quarantine? Your sex questions answered
Gender and Sexuality
Road Wave music review