Coping with corona: Oversharing during COVID-19 has evolutionary merit

Editor’s Note: The following series “One Year Later” is a week-long series curated by Sarah Fox as part of the Digital Research Internship Program in partnership with ViaNolaVie. The DRI Program is a Newcomb Institute technology initiative for undergraduate students combining technology skillsets, feminist leadership, and the digital humanities.

As we enter March in 2021, many of us can’t help but feel like we haven’t even processed the events of last March. The COVID-19 pandemic quickly went from a small news story thousands of miles away to up close and personal as we packed our offices, dorms and apartments to move inside. Marking the one-year anniversary, “One Year Later” is not meant to further highlight things we miss or how our lives have been negatively affected, but to demonstrate the resilience of human nature and how we’ve adapted to extraordinary circumstances.

This article discusses the rise in social media posting during the pandemic and how it has brought us closer together. The level of oversharing we have reached on the internet would be unheard of years ago, but now it has become a staple of maintaining human connection. This article was originally published on ViaNolaVie on April 9, 2020.

The other day, I caught myself revealing to all 1278 of my Instagram followers – my account is private, but is anything on the internet actually private? – that I was midway through my fourth day of not showering or changing my clothes. Under ordinary circumstances, that would be an outrageous (if not just simply embarrassing) statement to utter. So why did I feel totally comfortable and completely prepared to share it with ‘the world’ in these new conditions presented to us by the unprecedented coronavirus?

Much like the internet and social media were when they rose to stardom and continue to be, COVID-19 is an undefined territory that has subjected the entire population to large amounts of uncertainty, pressure, and exposure. However, much unlike the tempting openness of social media (first it was mySpace, then Facebook, Twitter and Instagram, and now TikTok), coronavirus prevention practices very much encourage closed and clean spaces and faces. There is no doubt that the strict social sanctions associated with softening the blow of this sickness have puzzled the population. Social distancing and self-quarantining tactics have been implemented practically everywhere in the country — separating, isolating, and alienating hundreds of millions of people. Regardless of our direct relationship with the virus, we all have been forced in one way or another to tap into our survival instincts to make it through the various challenges associated with flattening the curve. Interestingly enough, it turns out that one of those survival tactics may be posting personal information on the internet. So it follows logic that in the midst of this enduring and intense physical lockdown we are learning the most about each other; we are oversharing, and we do it because it feels good. 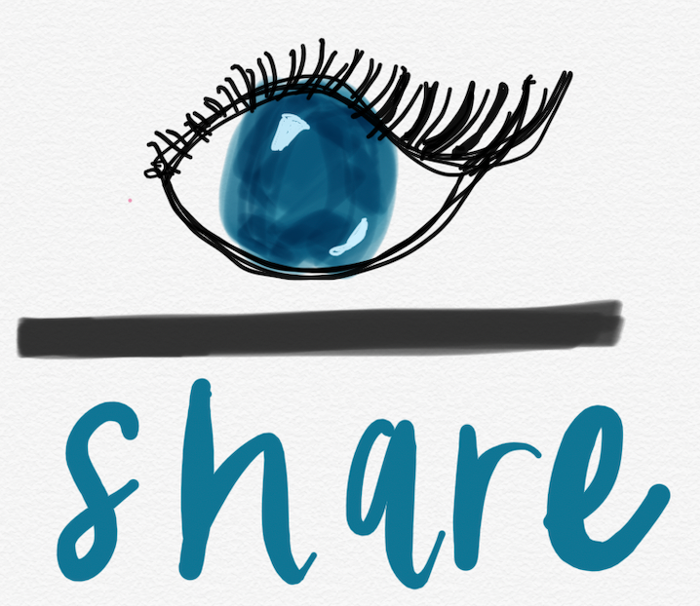 A drawn omission of my own participation in the oversharing that is taking place on social media as a result of the COVID pandemic.

It is important to note here that “oversharing” is a highly context-dependent concept, in the end determined on an individual basis by the viewers of one’s content. But a clarifying question – originally posed to me by my older (and apparently much wiser) sister upon viewing my fleeting IG Story regarding a four-day-old outfit – that may help you define oversharing is as follows: “Are you equally comfortable with your high school English teacher, your ex-boyfriend’s mother who still follows you, and your current boss all knowing this information about you?” Obviously, feel free to insert your own obscure followers into the question, then see if you still want to post that Story. Given this new boundary we have established for the concept, the following are explanations as to why we are exceptionally prone to breaking said boundary during this period of our lives.

That oversharing on the internet is a result of more stringent face-to-face social allowances is a phenomena well supported by human’s neurochemical makeup. According to a study done at Harvard University, parts of the brain implicated in the mesolimbic dopamine reward system show greater stimulation and activity when people talk about themselves and are markedly less engaged when that person is talking about someone else. In addition, there appeared to be an immediate change to less of a reward sensation the moment a person was notified that their thoughts would be kept private, a notion that lead researcher Diane Tamir feels has led to the continued success of social media.  Individuals were even willing to forgo money in order to self-disclose!

This biological penchant for rewards that we all possess links back to several aspects of human nature. We are all pleasure-seeking individuals, but oversharing has a certain vitality to it was well. Originally, this age-old reward system was the very mechanism that kept earlier, more rudimentary versions of the human motivated to embark on suspense-filled scavenges: it was a part of a survival instinct intended to keep hunters and gatherers alive. Now, it has been reassigned to keep us alive in a different way. By effectively storytelling, a person is able to gather social feedback, forage for more profound bonds with other people, and hunt down a higher social status.  According to Carolyn Cole, a licensed family/marriage counselor, when people post an abundance of personal or otherwise unnecessary information on the internet, “they are often desiring very much to connect with someone,” a feeling that most are deprived of during this state of emergency.

So though we as a collective human race are in uncertain times, many of us have found a means of coping with this novelty by sharing and absorbing more than we ordinarily would on social media. COVID relief campaigners have capitalized on this, releasing trending hashtags such as #AloneTogether and even partnering with Instagram to publish a ‘Stay Home’ sticker that automatically posts your in-house content to a shared story for all users to see despite everyone being physically separated. The token naysayers and whistleblowers who criticize one’s participation in such social movements might reference a failure to self-regulate or narcissism as the reasons for oversharing, but admitting something intimate or exclusive (such as my temporary lapse in good hygienic habits) may be necessary, now more than ever, to keep relationships, friendships, and acquaintances thriving, where without constant and in-depth updates on social media they may otherwise become extinct.

[…] are high; the isolation we’re feeling during this forced quarantine is driving many people to share more of their thoughts and sentiments than has historically been typical, even for a tech-connected […]

[…] high; the isolation we’re feeling during this forced quarantine is driving many people to share more of their thoughts and sentiments than has historically been typical, even for a tech-connected […]

Why We Need the “Social” Part of Social Media More Than Ever (Part 1)
Recent Posts on ViaNolaVie
Footprints: An interactive public art map Kelley Crawford, Steven Melendez, and Emma Fick worked together to create a custom interactive public art map for New Orleans. This project was made possible through a grant provided by EPNO (Emerging Philanthropists of New Orleans)! Take a walk and click away!