Big (un)Easy Living: We are what we watch

“I’ve been told I should open every Zoom meeting with a question,” said my sister, Allison, who teaches computer skills to public elementary school students in Houston. Of the 900+ kids who once passed through her classroom each week, about half have access to smart devices for the virtual lessons she is giving daily. But that’s a story for another day.

“So today’s question is, ‘What has been your biggest accomplishment during quarantine?’ ” she continued as our family Zoom got underway.

“I’ll go first. Mine is that I have watched 96 episodes — all eight seasons — of Homeland. I’m pretty sure I could be a CIA agent at this point.”

“We’ve done the entire run of The Americans,” chipped in my brother, Ned.

“I’ve done all of Billions, Ozark, The Tiger King and most of Mad Men,“ my husband, Stewart, offered.

And there you have it. Quarantine accomplishments summed up succinctly according to what (and how much) we watch. It’s as apropos a measurement of how we are coping as I’ve heard in all of my own TV news and talk show binging and online deep dives. These days, “you are what you eat” has morphed into “you are what you watch.”

Screens, small and large, have become not only our portals to the world, but also our survival mechanisms. He’s seen more TV in the past two months, my brother mused, than he’s watched in the past two years. According to Adweek, Americans in April doubled their online streaming time compared to a year ago.

And what we watch, I would offer, says something about us. Not in a news-show/politics way –the Fox versus CNN, reopen versus stay-at-home mentality indicated by where you point your remote. No, I’m talking about something more basic: Your choice of diversion TV is a better indicator of personality and attitude, I would suggest, than any online personality quiz. (The current fave around my household is the Enneagram Personality Test, but again, I digress.)

I’m currently watching all 22 Avenger movies, in order. Because … well, why not? What does that say about me? Some thoughts on one’s predilection for certain genres:

I have no expert credentials on TV consumption, beyond a fair number of years in the ‘90s as TV Focus editor for The Times-Picayune, when I had the enviable job of watching television for a living. But it doesn’t take much of a scientific leap to figure out that what we choose to watch in self-isolation reflects not just our cultural tastes, but also how we are dealing with the pandemic.

Sixty-four million households worldwide tuned in to Netflix’s The Tiger King when it dropped, without much fanfare, on March 20. It was just so much more fun to watch someone else’s train wreck than contemplate our own. 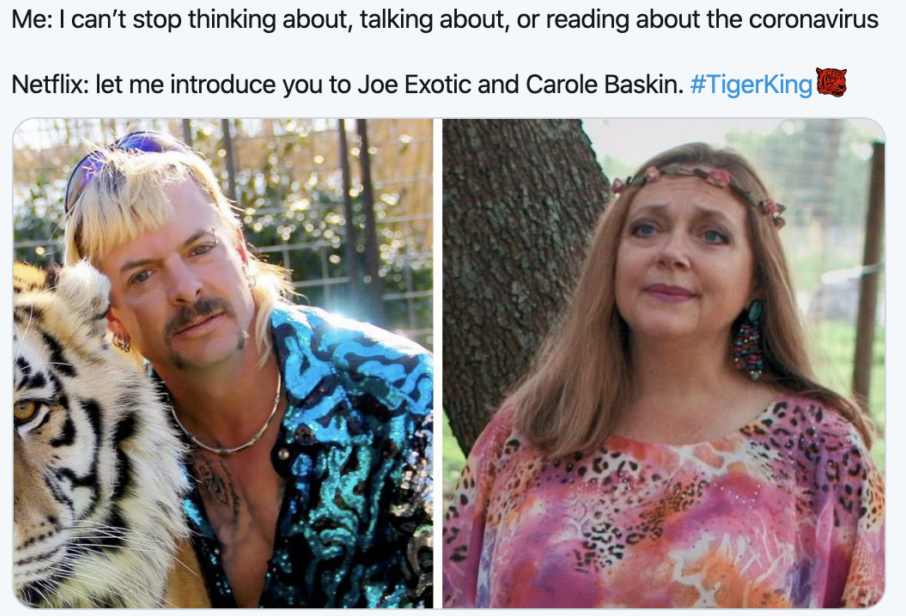 So what is this binging behavior doing to us? Is it beneficial escape or damaging psycho-trauma?

Before the pandemic, research focused on the dangers of too much TV. A July 2019 story in the New York Times cited a Norwegian study that estimated that 10 years of exposure to cable TV had lowered IQ scores by almost 2 points. I hate to think what the current TV-watching excess is doing to dumb down America. Judging by the headlines, it already has started to happen.

But there’s solace in our small screens, too. A way to live, if only for the moment, in someone else’s universe. Research has shown that TV watching, like other pleasurable activities, can trigger a release of dopamine in the brain, causing a sort of natural high. The more you do it, the more you crave it. Perhaps that’s not a good thing in normal times, but acceptably prophylactic in these.

I keep thinking that, when shows ramp up again, episodes are all going to be weirdly pandemic-specific – will The Conners be able to gather around the kitchen table, or huddle on the couch?  Will the NCIS: New Orleans team all be wearing face masks? We’ve already seen game shows without studio audiences and talk shows filmed from home. The possibility of more yet Zoom screens plastered across my TV makes me shudder.

Major league sports broadcasters made a splash last week by ruminating on adding digitally-added fans to empty sports stadiums. The potential for this “augmented reality” caused controversy, but I understand the allure of giving viewers the kind of experience they are accustomed to having. We’ve already lost so much to COVID-19, after all.

I don’t really want new shows that reflect our new normal. For me – and millions of other viewers — TV offers a welcome respite from reality.

So please excuse me while I go watch the next episode of Dead to Me. We’re halfway through the first season.

Everyday Wonder: Lessons learned in an era of virtual education
Audio and Podcasts