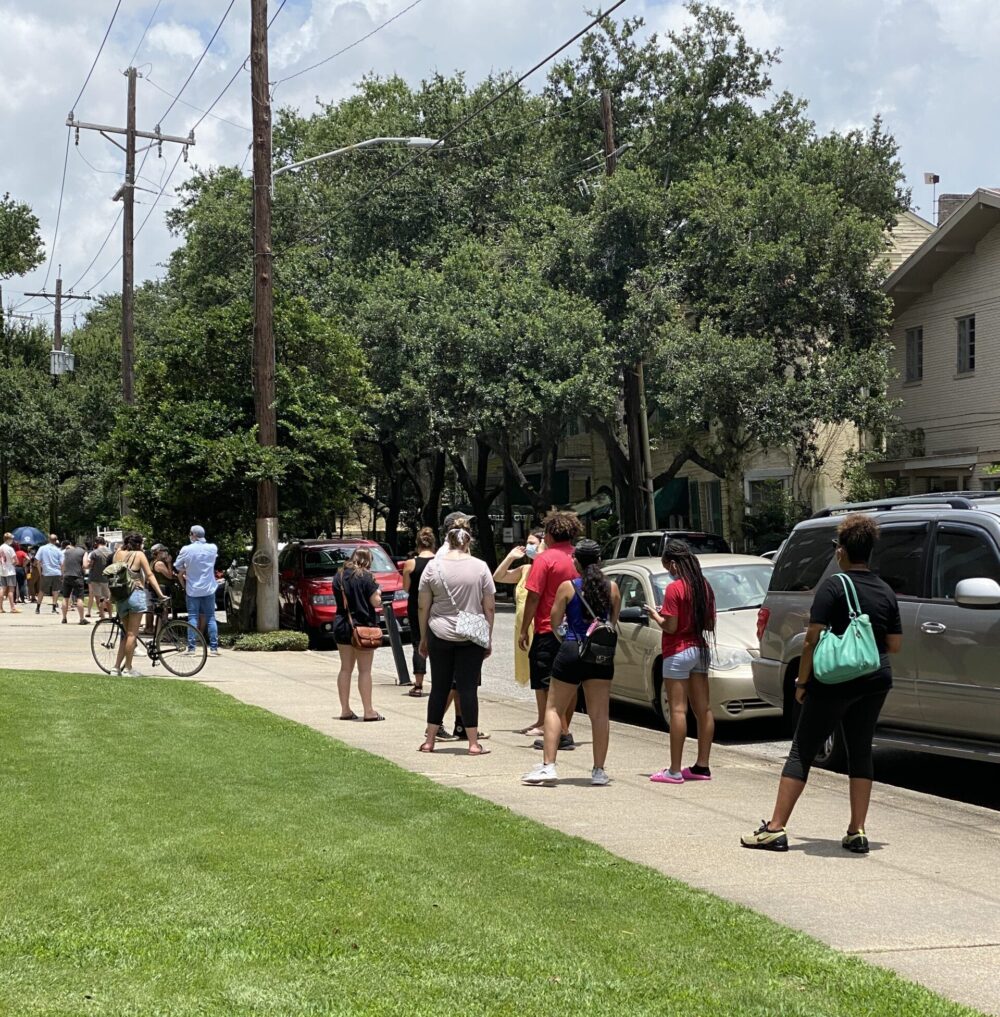 The socially-distanced line at a city COVID-19 testing site this week stretched for more than three blocks. (Photo: Renee Peck)

On Monday, I went to a bar for the first time in four months. But no rounds of beer or glass of pinot grigio were in the offing for me. I was there to get a COVID-19 test.

It seemed fitting that one of Monday’s free COVID testing sites, co-sponsored by CORE and the city health department, was held at the Avenue Pub on St. Charles Avenue. What better gathering place than a popular watering hole with an outdoor to-go bar all set up and waiting?

There were few imbibers Monday afternoon, however – the hordes that arrived were interested in only one thing. A test.

It’s not easy these days to get one. If you’re signed up with nolaready.gov (and you should be), you’re getting daily advisories that include city testing sites and times. Problem is, with COVID-19 spiking, more people are wanting tests, and there’s a limit to how many each site can offer. On Monday afternoon, the line reached 250 – the number of tests available – before testing had even started. My daughter and I had gotten in the already snaking line at 12:45 for a 1 p.m. start; a CORE worker came by soon after, counting the crowd (we were numbers 156 and 157). How long would the wait be, we asked? Maybe 30 to 45 minutes from here, he replied.

He lied. We finally reached the pub overhang, where three registration desks and two self-administered mouth swab stations were set up, 2 ½ hours later. The test took three hours in all, most of it standing in a thin, socially-distanced line that stretched four blocks along a hot sidewalk in near-100-degree heat. If you were actually sick, you certainly couldn’t have done it.

We weren’t. Sick. Two days later, we each got an email telling us we do not have the coronavirus. We didn’t think we did, but we do buy into the idea that the more people get tested, the better we can get a handle on this pandemic. I was convinced by a comment making the rounds from New Orleans actor Wendell Pierce:

“I discovered most of my family and friends haven’t been tested for COVID-19,” he wrote (@wendellpierce). “I get tested weekly. Here in NOLA the testing is available daily. People don’t understand that it is our most powerful weapon to stop this. Mass testing. It stops the virus and opens up society.”

A powerful weapon, perhaps, but not one you can necessarily get your hands on. A survey of free testing sites reveals more demand than supply. The Walgreen’s in Harahan does drive-through testing by appointment; a check this week found that the earliest available slot is five days away. The CVS on Claiborne also does drive-through testing by appointment; they’re more readily available, but a worker there told me that, because of high test numbers, the turnaround for results is now eight days instead of the usual two or three. 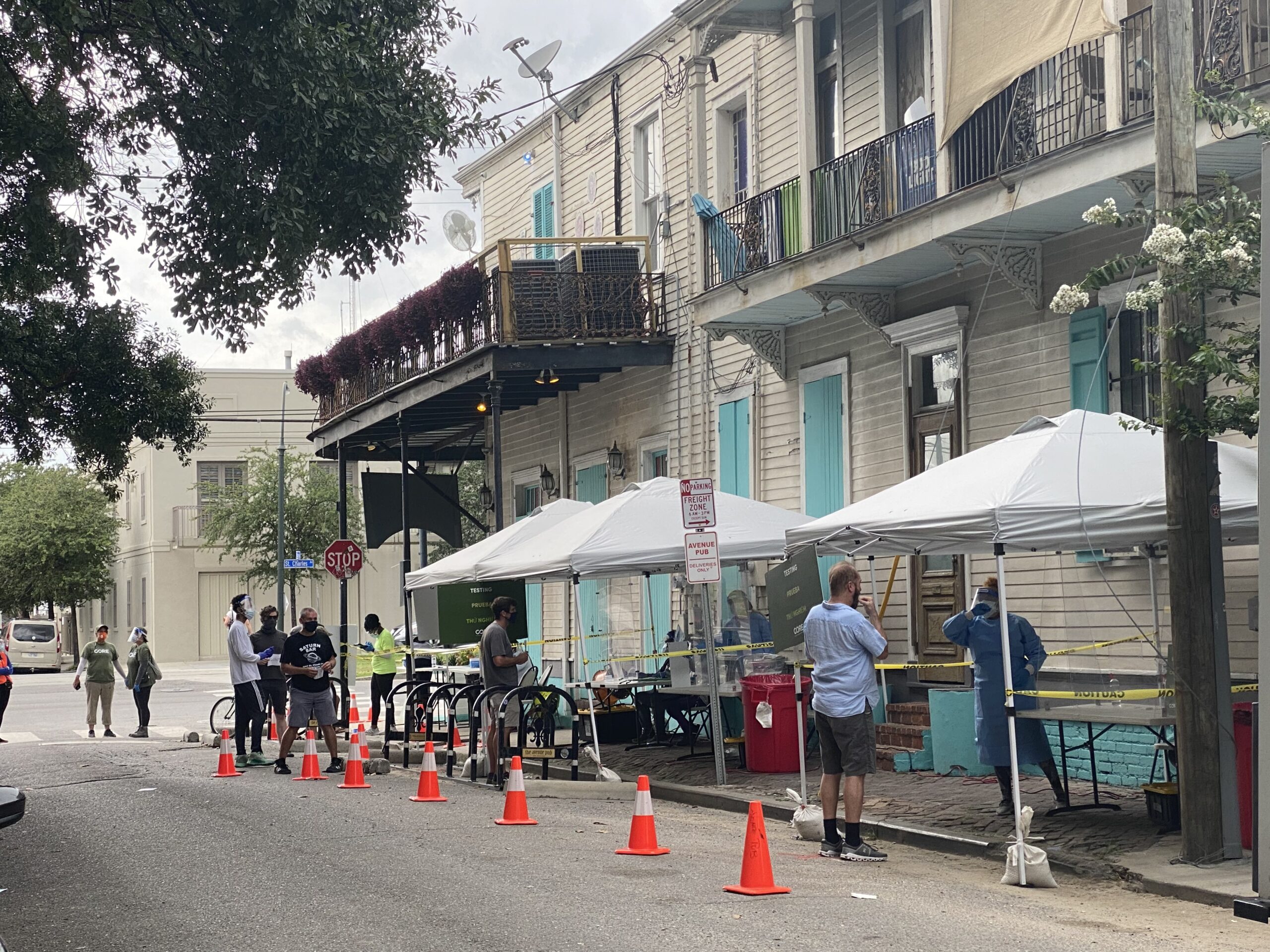 Where better to wait for a COVID-19 test than a local pub? Photo: Renee Peck)

NOLA Ready refers overflow to CrescentCare on Elysian Fields Avenue, where outdoor, air-conditioned tents are set up for walk-ins. Yesterday I got a text alert at 1:39 p.m. saying that the facility had already reached its daily quota.

We are not alone. In Texas, where demand for testing is also soaring, Texans “report problems with almost every facet of the testing process,” according to an article this week in The Texas Tribune. It went on to detail website glitches, unanswered phones, lengthy lag times in test results and hours-long waits at test sites.

There are many reasons for this, from test-implement shortages to red tape. A CORE volunteer told me Monday that 250 tests per site is all they can get, and afford. Tests are expensive, and stories already are reporting that costs even for consumers willing to pay are skyrocketing: The New York Times profiled two Austin, Texas, friends who were tested together. One paid $199 cash for the test, while the other used insurance – and eventually received a bill for $6,408. 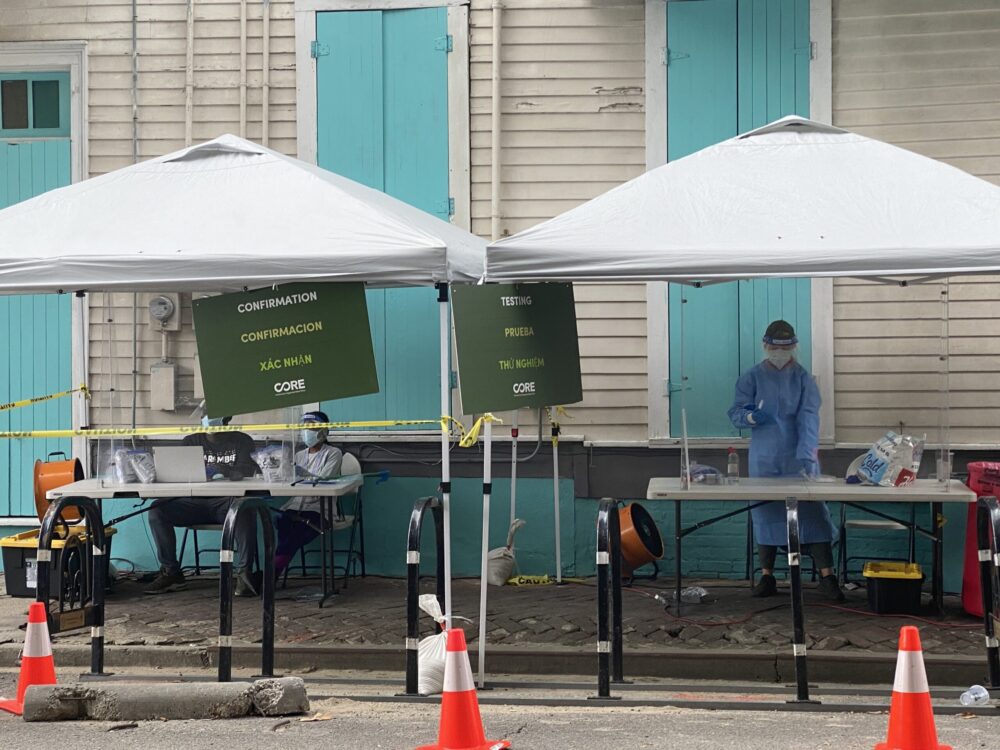 I will leave it to the pundits to debate the lack of a coordinated federal response, the anti-mask movement and the economics of supply and demand. But I wonder, in my head, why the “greatest country in the world” can’t develop a home test, a self-test or even supply vendors with enough tests for us to combat this thing.

I’m driving to Houston next week to see my 88-year-old mother. I wanted to make sure I am virus free before I do. A friend wants to get on an airplane, but wonders if she can get a test before or after her flight to make sure she hasn’t spread, or gotten, COVID-19. I’ve written before about the hardware store owner who, when asked why he wasn’t wearing a mask, snapped back, “Because I’m not sick!”

The truth is, he doesn’t know if he is sick or not. And neither will any of us unless we can easily get tested to find out. Based on current events, that won’t happen any time soon.