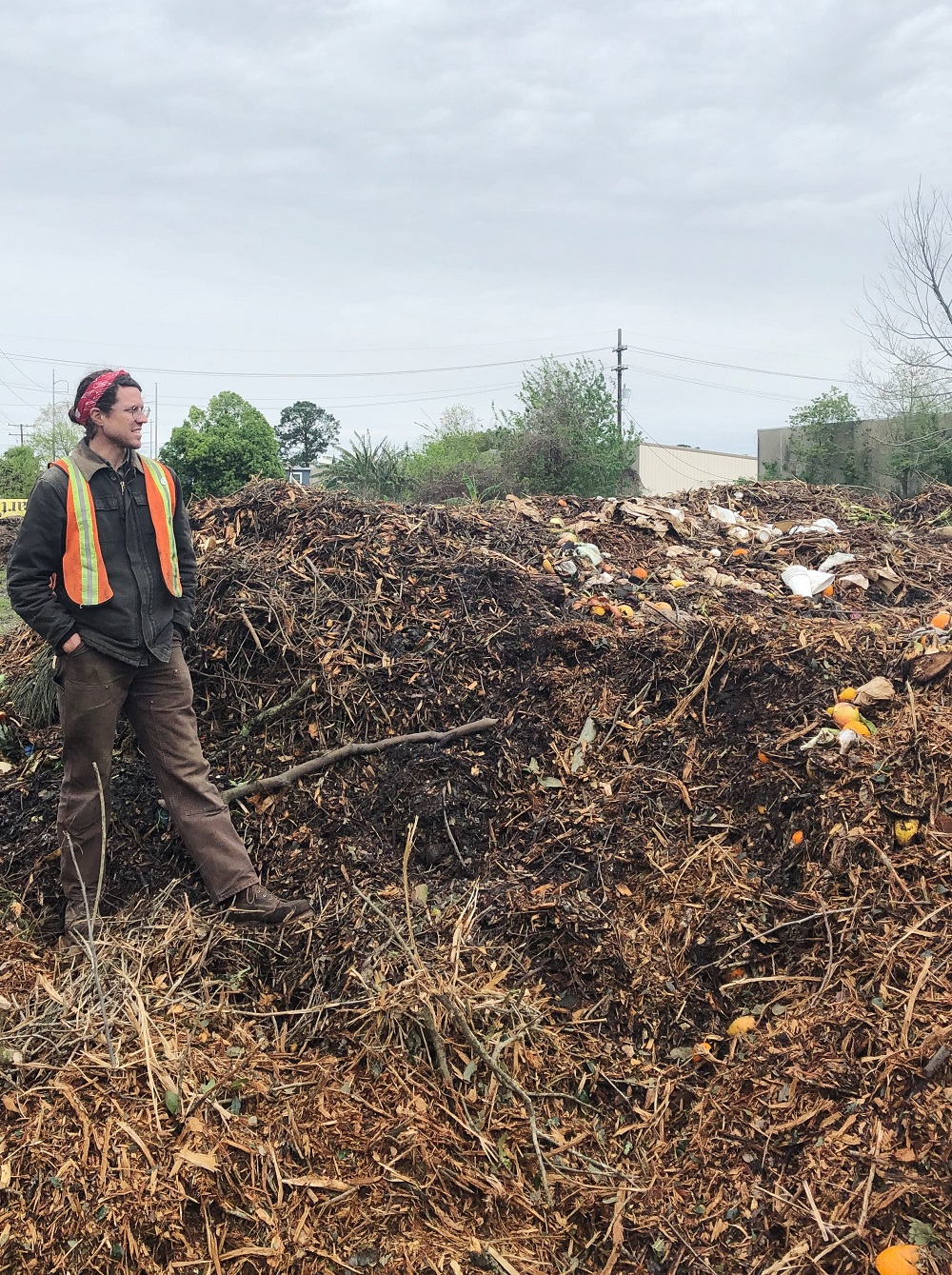 The horizon looks good over a compost pile. (Photo provided by: Susan Sakash)

Like the old saying goes, “One person’s citrus peel is another person’s treasure.”

It’s no Golden Rule. But this underlying principle of composting, or decomposing organic matter into plant fertilizer, still holds true.

“Compost is one of the best ways to enhance your soil to make it be able to produce healthier plants and vegetables,” said Susan Sakash, operations manager at Schmelly’s Dirt Farm. “It’s this full-cycle idea of taking food scraps out of the waste stream and instead returning them back into the soil as soil amendments to be able to grow healthier food.”

These two categories of benefits that composting provides are distinct and key to environmental preservation today: removing food scraps from the waste system and enhancing soil for gardeners and farmers.

But the benefits contained within these two categories are more vast than many may realize. This article focuses on the benefits compost brings by reducing waste in garbage cans and landfills, and the next composting feature covers the additional benefits of using food scraps as soil amendments.

As it turns out, composting may be even more important during quarantine and going forward, for many reasons.

Every fruit or vegetable peel, every core or pit, every tip of greenery left out of the cooking process ends up in a waste bin, either a trash can or one set aside for compost. While each individual fruit peel may not seem like much, over time, food scraps become a significant portion of what ends up in our garbage collection.

Those trash bags — and everything in them — then head to a landfill elsewhere in the region. For now, it can be easy to forget those piles of food scraps that could have been diverted to a community compost donations bin. But in time, it will become increasingly difficult to ignore the towering piles of waste and pollution that result from excessive trash, plastics, and food scraps.

“Landfills are essentially a finite amount of land — we will run out of them,” said Lynne Serpe, founder of Compost NOW. “This current crisis has been showing us that people are increasing their use of single-use disposable plastic, which means that that precious land or landfill is being taken up by food scraps. That can be a problem down the line.”

Vulnerable communities are increasingly susceptible to health and quality of life issues associated with the landfills so often built in or near their neighborhoods.

“Landfills are always put near vulnerable and marginalized communities,” said Kelly Haggerty, chair of the Food Waste and Recovery Working Group for the New Orleans Food Policy Advisory Committee and site director for Food Rescue US – New Orleans. “So the less that we put into landfills, the less that we’re actually contributing to environmental racism. You’re also creating less waste in these landfills, which are extremely harmful and hazardous.”

Take-out orders from restaurants and fears of spreading the virus through reusables have led to the increased distribution of single-use plastics during quarantine. This means more single-use plastic utensils, bags, and containers end up in trash cans and, eventually, landfills.

“It is important to offset all of these single-use plastics and these takeout containers, on top of all of the PPE [personal protective equipment] and the gloves and things we’re seeing being used in excess right now,” said Brynn Comeaux Hutzler, program manager for the New Orleans Food Policy Advisory Committee. “I think it’s important to offset, and even if you don’t have the means to offset it yourself, there are also efforts in the community regarding food waste and recovery and composting.”

But individuals can at least try to divert compostable matter out of their own trash cans to make room for additional single-use plastic waste, if not avoid nonbiodegradable plastics entirely. 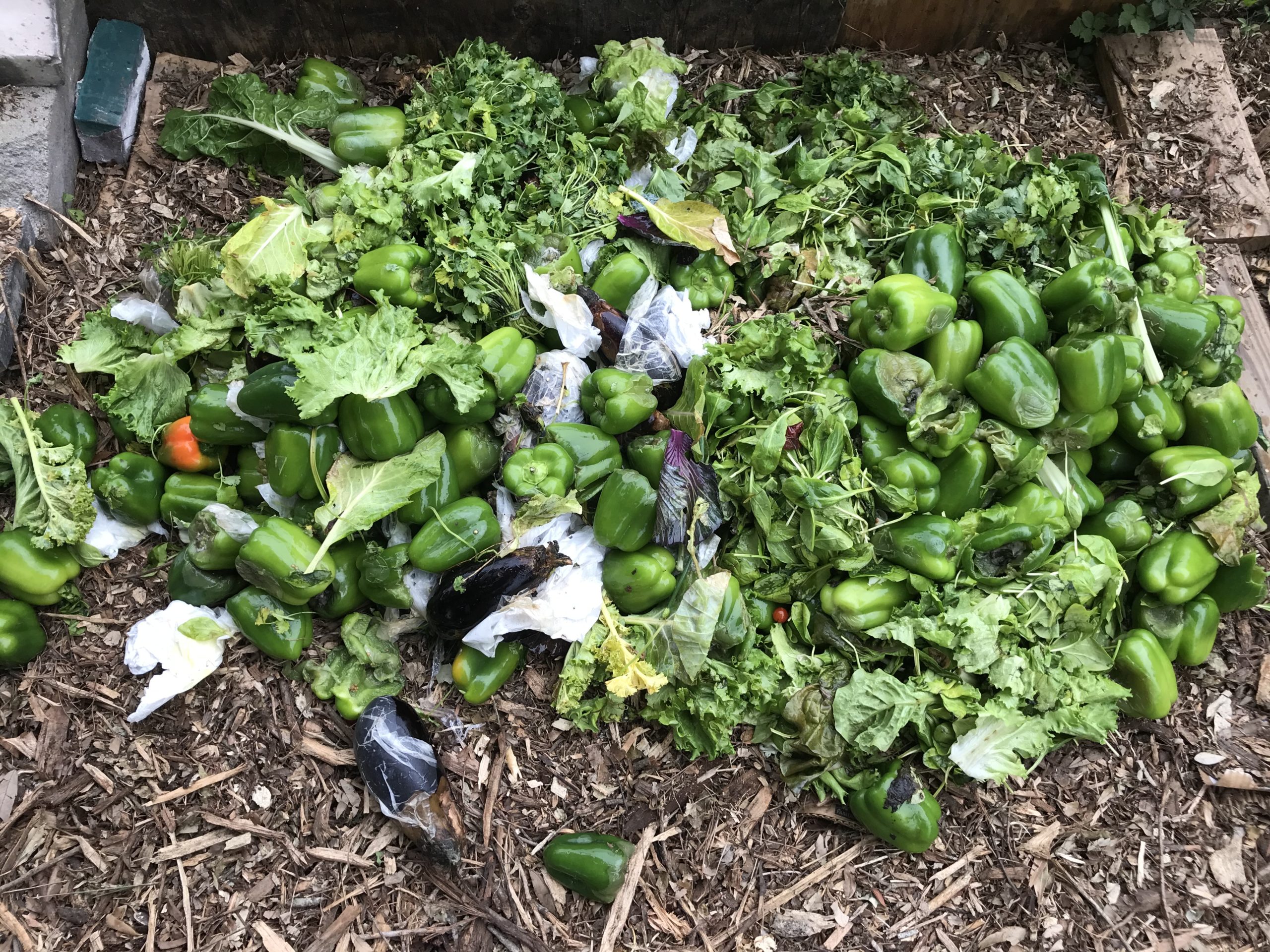 Food waste that can turn into powerful soil. (Photo by: Kelly Haggerty)

Landfills pose more of a public health threat than the waste itself. Over time, organic waste present in landfills can threaten the air and water quality for nearby communities, and the ozone layer in general.

“Landfills can present several environmental hazards once they release methane into the air which then depletes the ozone layer and amplifies and accelerates climate change,” said Haggerty.

“When the food scraps go to a landfill, they are typically decomposing anaerobically without oxygen, and that process creates methane,” said Serpe. “And methane is a greenhouse gas that is several times more potent than carbon dioxide. So the diversion of the waste from the landfill has a massive impact on greenhouse gases.”

5. More people are cooking at home

Being stuck at home for quarantine, many New Orleanians have been using this time to experiment in the kitchen and broaden their cooking and baking skills.

“Many more people are cooking their own food in a way that maybe they haven’t before,” said Sakash. “And when you’re preparing food from whole ingredients, you’re generating more food scraps.”

More cooking and more food scraps in the kitchen means the potential for creating more waste than usual. Ultimately, this can mean either more waste ends up in the trash can or you have more contributions to your own compost bin or for community compost donations.

While people are home and have the time to create new and better systems within their kitchen and at-home lifestyle, composting is a relatively simple but beneficial way to help the planet and local community.

You can reduce instances of some of the more common kitchen annoyances like smells and bugs just by separating compostable food scraps from the regular trash you can keep in or near your kitchen. And with the summer heat beginning to set in, this is the time of year to be mindful.

“When we throw food into our trash bin, we can attract bugs into the household and odors that we don’t really want,” said Haggerty. “So, if you separate your food waste from the trash cans, then you’re throwing your trash out less, you’re creating less odor in the household, and you’re attracting less bugs.”

The greater metro area will begin to slowly open more businesses and amenities in the coming weeks and months, and more New Orleanians will return to work, find new jobs, or otherwise seek a sense of new normalcy. With the time still left, beginning a composting practice in your home can offer many benefits to yourself, your community, and Mother Earth–both now and going forward.

Composting, then, at its core is paying forward the love and appreciation we have for enjoying and maintaining the great circle of local food life.

“It’s about taking this idea of something that has been seen as trash and thinking of it as a treasure, a benefit for food growers,” said Sakash.

Click here for an interactive map of where to drop off saved food scraps for community composting.

[…] Part 1 of this two-part series on composting during and after quarantine focused on benefits associated with diverting food scraps from the trash pickup and, ultimately, landfills in the region. This article breaks down the additional benefits of transforming compost into fertilizer for the enriched soil that local gardeners and farmers can then use to grow their own food. […]