The foreign side of COVID-19: Graduating international students and their OPT year

“[The alternative] deals with subjects not given regular coverage by publications generally available at newsagents.” — Chris Atton 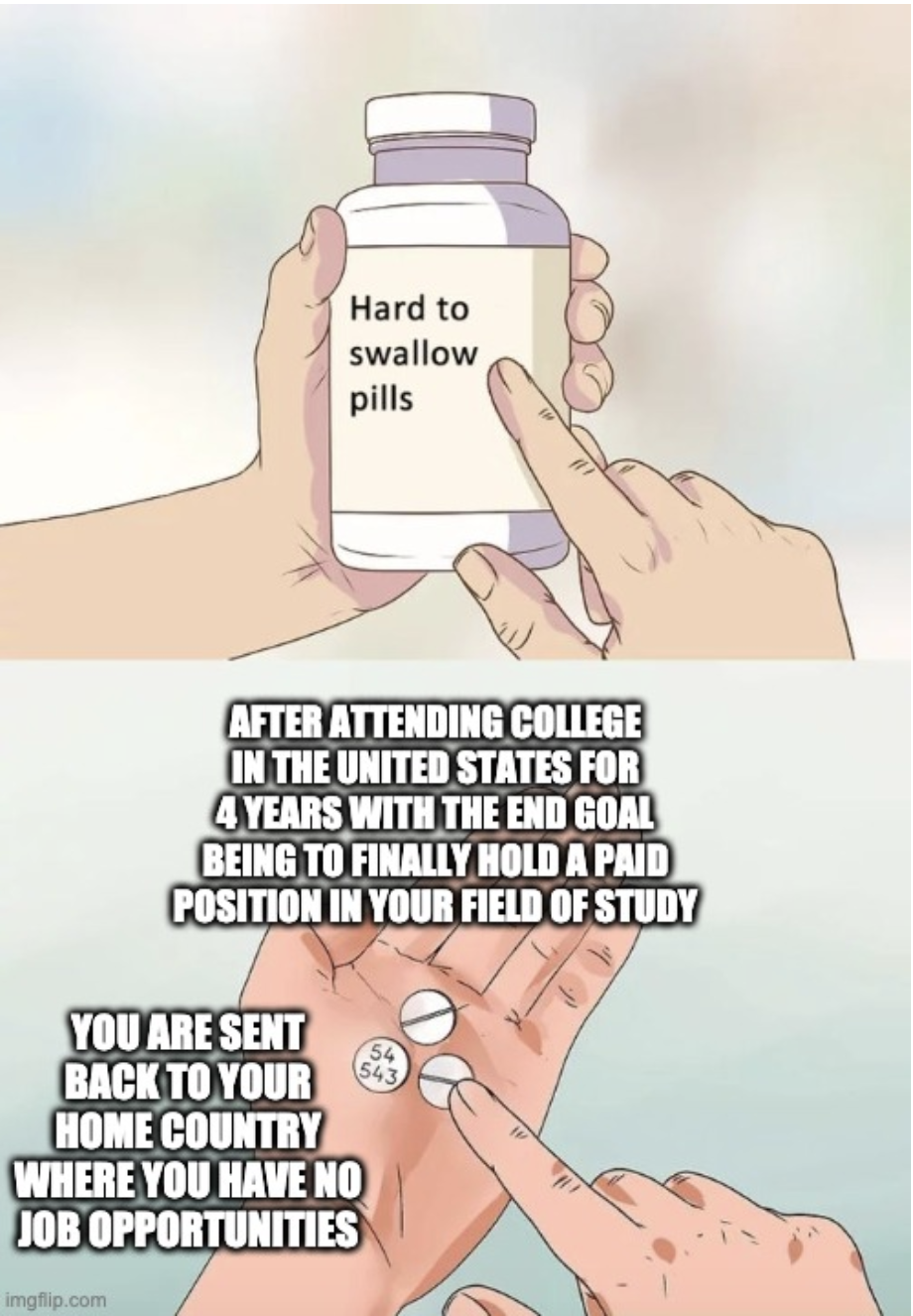 The realization that they will not be able to complete their OPT year is a hard reality for countless graduating foreign students. (Meme by: Emma Van Wynen)

Whether you’re a carrier or not, COVID-19 has infected all of us, in different aspects of our lives. From everyday activities to more permanent conditions, the precautions that we are being urged– and forced– to take during this global pandemic have not only affected our current state but our future plans. Soon-to-be university graduates across the country have remained an important part of the conversations hosted by mainstream newsagents. Major news sources like CNBC have made statements suggesting that current college seniors, the oldest members of the Gen Z generation, will sadly be following in the footsteps of the millennial generation— entering the job market at one of the worst economic states in history. However, the subject of foreign soon-to-be graduates has not been given equal or regular coverage across United States newsagents.

International students graduating from American institutions are given a period of up to 12 months where they are permitted to live and work in the United States; this is called an OPT year (Optional Practical Training). The period is extended to 36 months for students graduating from science/engineering/mathematics programs. There are numerous rules and regulations one must follow in order to be eligible, properly apply, and perhaps be granted this work opportunity. The outbreak of the coronavirus and the United States government’s reaction to it has made many of these impossible.

Under the Trump administration, it has been declared that embassies and consulates will cancel all routine immigrant and nonimmigrant visa appointments as of March 20, 2020. This means that, even if an international student is somehow able to submit their OPT application during this time, it can be assumed that it will not be processed. In order to be eligible for an OPT year, the foreign student needs to be inside the United States at the time of applying and should remain there over the course of the 2-3 month processing time in order to receive their new travel document (an EAD card). This rule has posed major issues for international students who have traveled back to their home countries after the closures of universities and the fear of further US border closures.

After Tulane University was shut down in early March, I (an international student) sat on the phone with my parents for hours. We discussed over and over the pros and cons of me returning home or staying in my apartment in New Orleans by myself to ride out the virus. Countless foreign students like myself have been forced to make the impossible decision of staying in America and potentially not being able to see their families for months on end, or traveling home to be with their families and not being able to complete their OPT year. This decision is so difficult to make because even if the international student is granted eligibility for their OPT year, there is still no guarantee that they will be hired during these bizarre times. Unless the US government is able to alter its policy, students who didn’t file for OPT before leaving the US won’t be authorized to work in the US.

After reaching an economic state across the United States that looks better than it has for the last fifty years, the coronavirus has majorly thwarted the success. CNN Business declared that nearly 17 million people have filed for initial unemployment benefits since mid-March. When the economy begins to reopen, and with millions of Americans having already filed for unemployment, businesses will be giving their first available jobs to American citizens, not to foreigners. It only makes sense for a country to prioritize the needs of its citizens before those of immigrants and/or visitors, but it is because of this that soon-to-be international student graduates are not receiving regular coverage in mainstream newsagents. While it must be extremely harrowing for these American citizens who find themselves unable to get a job directly out of college, they at least have the right to remain in the country. For the 2018-2019 academic year, there were over 1 million international students enrolled in US universities. This should make the graduating international student population a viable part of this conversation.

It’s a deceiving process: living and attending school in the US for four years, eight if you also went to an American boarding school like I did, and then being smacked in the face with the reality that your time in the country is over. Everyone is discussing how hard this pandemic will hit young Americans attempting to enter the workforce– but what about the students who only had this one year of opportunity to legally hold a paid position in the United States, and now they are being sent back to their home countries? Hopefully The Department of Homeland Security will be able to relax the regulations on OPT year applications, but until that time, international graduates wait in fear.

Free to affirm your own stereotype: Is Pabllo Vittars ‘111’ gay liberation? An English speaking listener may not fully realize the unabashedly sexual content of...

Tiana Hux: Portrait of an artist
Musicians
Free to affirm your own stereotype: Is Pabllo Vittars ‘111’ gay liberation?

New Orleans—not your average creative capital for Lauren Delaney George
Artists
We use cookies to ensure that we give you the best experience on our website. If you continue to use this site we will assume that you are happy with it.Ok