As a hub of artistry, creativity, and live performance, New Orleans was hit particularly hard by a stay-at-home mandate that caused hundreds of bars and restaurants to close citywide. The COVID-19 quarantine as a public health crisis is unprecedented in scale and impact, save for larger hurricanes.

The local live music industry is one of many struggling to regain footing while practicing social distancing and self-isolation. Luckily for many solo and ensemble artists, livestreaming technology has offered a new tech-savvy avenue for connecting musicians with their fans. Attendees can safely partake in virtual live performances from the comfort of their own couches.

Perhaps most importantly, what this livestream boom has come to remind us all in these uncertain times is that a community that supports each other rises together. Fans and artists are showing love to one another while venues and musicians are co-hosting livestreams. This crisis demonstrates that, once again, nothing can stop New Orleans from serving up live music to the masses in the spirit of unity and strength of character.

A Focus on Local and Underground

Receiving the spotlight in many of these livestreams are lesser-known and underground artists in the New Orleans music community. These include artists ranging from traditionally uncelebrated and underappreciated genres like electronic dance music (EDM) to local favorites in the jazz and improvisational scene that have gained national notoriety but are not yet household names.

“We have a lot of friends in the music industry that are, say, up and comers–they’re new, but they, you know, they still lost their jobs too, so we’re trying to sort of help everyone in every realm,” says River Beats CEO and cofounder Ben Dills. “It all spawned from us just trying to help keep the music community alive and keep some live music going into people’s homes while they’re sitting all cooped up for quarantine.”

“100% of [fan donations] goes either to the artists for a relief fund or the artist chooses a charity of their choice,” Dills continues. “And so for us, it’s just a chance to give back and to utilize our platform for some good.”

Offering financial support and energizing the New Orleans music community tends to be the primary motivations for local livestreams. Several promoters and organizers of underground artist collectives are utilizing livestream technology during the current quarantine.

“We were really just wanting to focus mostly on local music,” says Kristen Friedrich, cofounder of bass music collective Earthbound. “It’s really a big passion of mine to help enrich the local culture and showcase people from here, especially when they’re not getting the gigs that they’re used to getting, and people are just kind of struggling.”

“I’m not opposed to reaching out on the bigger platforms and trying to find more artists in a wider range outside of the southeast,” says Friedrich. “But yeah, it’s just been very underground and grassroots–just like us.”

Artists are also using this opportunity to support each other in unique ways. Whether it’s boosting attendance on their friends’ and music cohorts’ livestreams or spreading digital tips to those in need, the local live music scene hasn’t lost its community-centered touch.

Here’s what a handful of these artists and promoters had to say:

“I haven’t been depositing digital tip money in my bank account yet and kind of leaving it in [Venmo] for when I need it, but also just so I can easily send it to other artists who are doing the same thing,” says Tristan Gianola, composer, guitarist, and production manager at Carnaval Lounge. “We just have a pool of Venmo accounts with whatever money in it that we’re just passing off to each other, and someone will deposit when it’s appropriate.”

“I can intermittently check out my friends who are doing their live streaming, and I’ve gotten to hear my friends play more in the past couple of weeks than I typically do in a year,” says self-employed musician and part-time fiction writer Beth Patterson.

“I think the coolest part is that when you get to work with a group that you haven’t worked with before, it’s kind of like being let into a family because they end up having a whole array of artists that they’re all really good friends with,” says Dills. “As soon as we get a chance to work with someone we have never worked with before, it kind of opens the door to work with a whole bunch of their artists. It’s like a grassroots network across the internet that’s bringing us all together right now.” 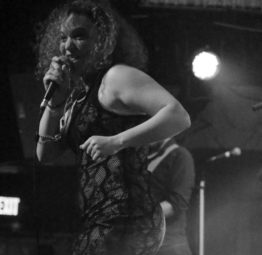 “I don’t really try to see it as a competitive thing–I like to build other people up,” says DJ and producer Sean McConnell, stage name Skooby McMurda and organizer of Murda Mystery, a collective of local EDM artists. “[We coordinate time slots] so nobody’s overlapping and we’re all getting on the same platform, and just playing at different times. So, you know, everybody gets a chance to have their moment instead of trying to compete.”

“It has been really positive, and I was able to reach a couple new people,” says Daria Dzurik, performing artist and founder of Daria & the Hip Drops. “Just because I noticed Tipitina’s, for example, shared my last livestream, and so did the YLC, the people that put on Wednesdays at the Square. I think through both of them sharing it through their pages, I feel like I was able to reach a couple other people that maybe I normally wouldn’t have.”

In addition to artists themselves, music venues are also exploring livestream technology. This helps them raise money to at least keep their virtual doors open until they can officially reopen their establishments to the public.

“I had a feeling before they closed the bars, and I was like, ‘I gotta put something in place,’” says Keith Magruder, founder of SideBar Nola in Mid-City. “Because obviously financially we can’t skip a beat. Number two, I don’t want to stop providing music to the masses. So we set up a cool little pay structure to where you can pay your virtual admission, tip the musicians, buy a virtual imaginary drink, and then tip your bartenders, and it’s been really cool.”

Uptown’s Maple Leaf Bar has been regularly livestreaming sets from solo artists as well as sharing livestreamed sets from other popular local musicians. House of Blues New Orleans has also been livestreaming artists in conjunction with its Foundation Room venue.

“And if it’s something that can benefit both the venue and the artist–one thing is that it’s nice to see that a lot of the musicians are remembering their favorite bars that have sustained them,” says Patterson. “They want people to know that a portion of their proceeds are going to go towards their regular bartender who’s completely out of work.”

This combination of artist livestreaming and venue hosting and promotion offers both sides of the livestream a truly symbiotic relationship. These efforts support the togetherness-focused community vibe that New Orleans has become famous for throughout decades of overcoming hardships. Natural disasters, public health crises, and other difficult situations seem to serve New Orleans’s reputation as a united and loving citywide populace. 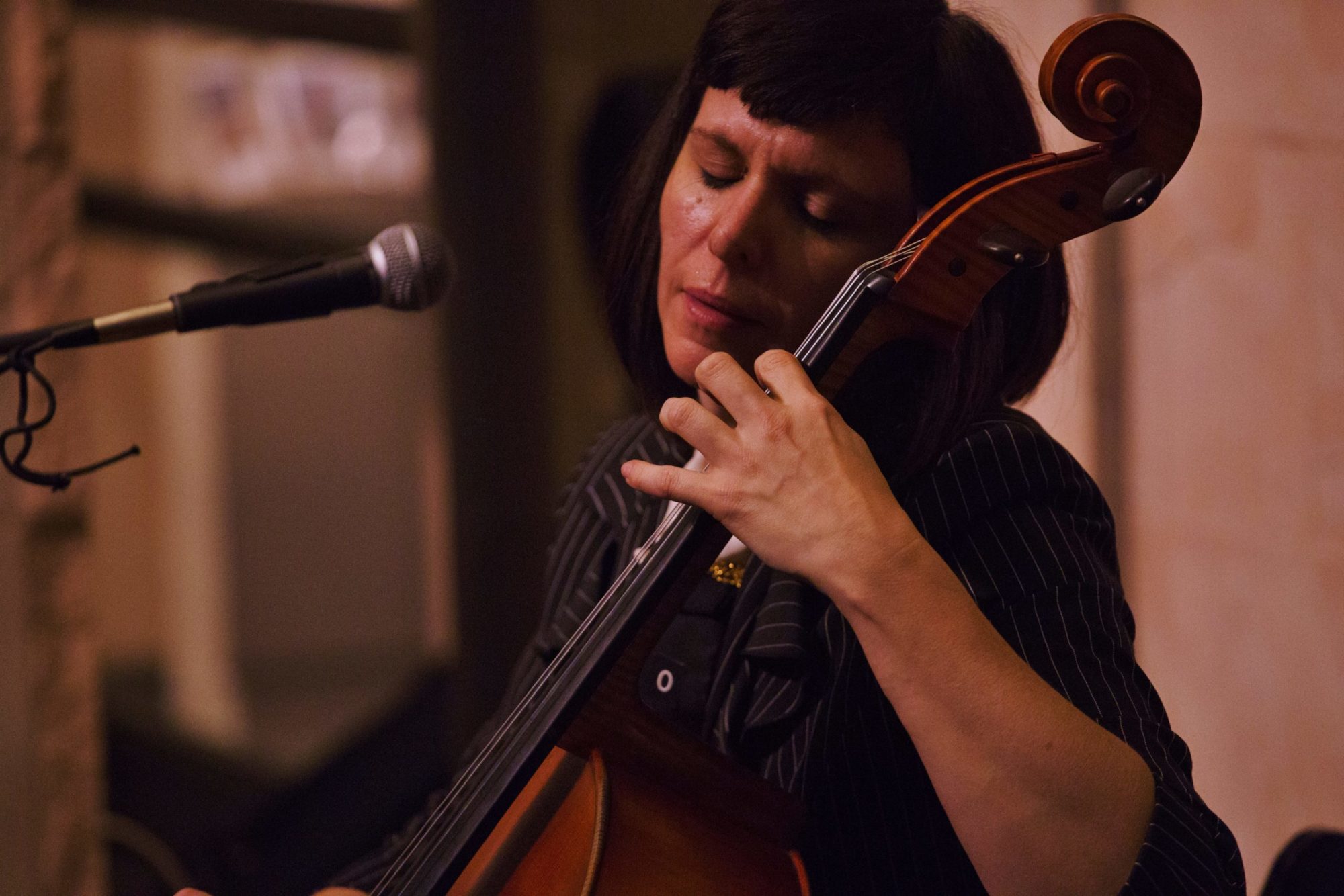 Helen Gillet at The Ogden. (Photo by: Steven Hatley)

Though it may be obvious, no livestream can fully replace the physical sensations, emotional moments, and good vibes experienced by fellow music lovers at a live musical performance from artists in New Orleans.

“And there’s vibrations in a room,” says Gillet. “There’s sonic vibrations in a room, whether it be from people clapping or stomping or screaming or shouting or talking. And then the musicians, you know, playing through amps that are vibrating off the back wall, and then the bar and the clinging of the glasses, and all of that is a vibration. And we don’t get that through live streaming, no matter how hard we might try.”

New Orleans’s live music scene will continue to make the most of the current COVID-19 quarantine. And artists and fans will all gladly welcome the day when we can be reunited in those sonic vibrations once again.

[…] this community of artists and fans continue to support each other, join in their enjoyment of what New Orleans’s live music […]