Footprints: The tree of life

The Tree of Life

I Saw in Louisiana A Live-Oak Growing by Walt Whitman

The massive, mystical, looming oak tree known as the “Etienne de Boré Oak” or “The Tree of Life” located in Audubon Park at 6500 Magazine Street in New Orleans, Louisiana (3), embodies the surreal nature of the fine city. With its branches spreading 160 feet wide and low hanging Spanish moss that looks like drapes of evergreen lavender, the tree stands against a backdrop of a bright blue sky in the middle of Audubon’s blossoming green park. As the low dreamy green branches drop and hang from the wooden sturdy branches of the tree, the humid wind of New Orleans blows a sweet breeze of air that smells like sweet floral perfume. Standing underneath the tree, one can be grazed by the Spanish moss that grows on the massive oak. While looking up at the branches and leaves swaying, one can feel the cool shade of the tree blocking the sun; however, one can see the sun shine through the cracks within the draping moss – intensifying the green of the branches of the tree. The stump, 35 feet in circumference, is rooted into the ground and sprawled with bumps, right beside its enormous base is a piece of wood that reads “Enjoy My Shade! Don’t Trash My Roots”(3). 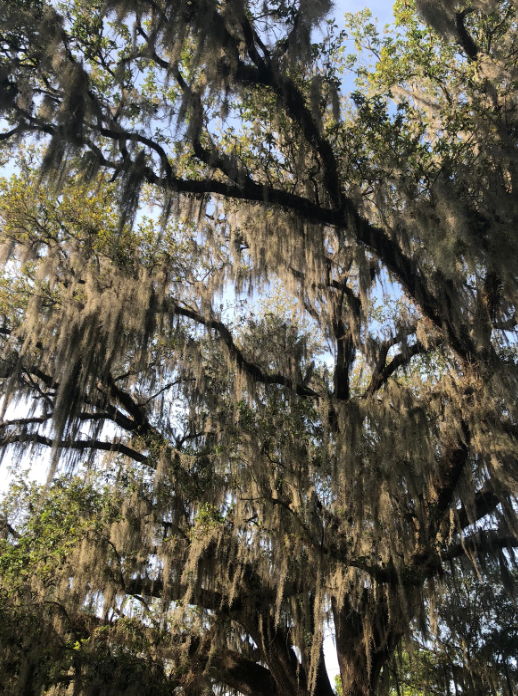 Spanish Moss on The Tree of Life. Taken by Ellen Sekhniashvili

The physical stature of the tree is impossible to miss as it stands amongst smaller trees that surround its dominating presence. Children love to play around the oak, putting one foot on the trunk and sprawling out their hands to climb the branches of the tree and look over Audubon from above – laughing and smiling. The historical significance of The Tree of Life to the city of New Orleans has transcended hundreds of years, stemming from around 1740 (3) – which is almost as old as the city itself. The Live Oak Society chose the tree to be one of the original inductees based on its old age and the magnitude of size, proving its existence and survival to be extraordinary (3). Surviving through natural disasters as grand as Hurricane Katrina, surviving over 100-500 years (3), and surviving for the people of New Orleans – The Tree of Life has remained rooted in the grounds of the Audubon Park soil. The Tree of Life encapsulates the resilience and beauty of New Orleans nature and its physical beauty has been the source of many poems, stories, and fictional writing such as “I Saw in Louisiana A Live-Oak Growing” by Walt Whitman. Giving the trees in New Orleans human characteristics capable of friendship reveals its magical qualities that blend the lines of reality and imagination. The Tree of Life acts as a beautiful resting place for all those that come across its enormous embrace of sweet, long, draping Spanish moss.

The qualities of the tree have also encouraged a fictional and dreamy way of perceiving its existence and significance. The elements of beauty, fragrance, and ambiance that the Tree of Life radiates in person weave into the stories of others who have come across it’s long, strong and refined branches. Author Ellen Gilchrist, for example, wrote: “The President of the Louisiana Live Oak Society” in 1978 to tell a charming story of two young friends Robert and Gus who personally interact and find their meaning to the “Tree of Life” (2). Although the story is fictional, it tells a believable story of two friends who find comfort in the Tree of Life amongst struggles and obstacles. Similarly to the children that can be seen playing on The Tree of Life’s low hanging branches on any given day, Robert and Gus’s adventure encapsulates the beauty and innocence of playing on such a remarkable oak tree. She describes, “Imagine a brilliant day in early spring. It is the middle of the afternoon and under the low-hanging branches of the oak tree the air is quiet and cool and smells of all the gardens on the boulevard; confederate jasmine, honeysuckle, sweet alyssum, magnolia, every stereotyped southern flower you can imagine have mingled their individual odors into an ardent humid soup” (2). In her depiction of the adventure between Robert, Gus, and the tree, Gilchrist alludes to intense magical feelings of enchantment and freedom by the symbolism of the oak. The way that Gilchrist describes the mix of wonderful floral smells that the tree gives off parallels the oak’s divine odor when coming across it in real life. The humid “soup” that she references can be felt and smelled in the New Orleans heat. The density in the air makes the smells of the oak incredibly potent and creates a dewy atmosphere. 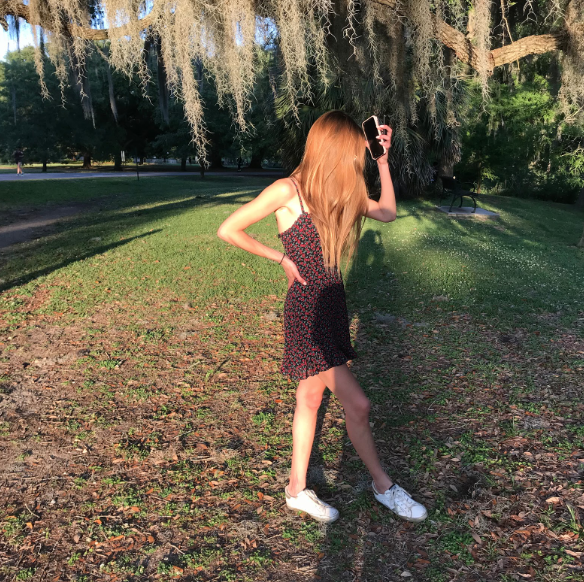 The person underneath the Tree of Life

New Orleans is often portrayed as a dramatic and theatrical city full of surprise, passion, and culture. In the article “New Orleans, Where the Stage is the Street”, Nathalie Dessens explores the idea that New Orleans is ultimately set up like a stage in a theatre. Comparing the balconies to boxes in a theatre where the audience overlooks the show, Dessens encompasses the ethereal energy of the city and how it mimics fictional life (1). She reveals that the expression of the city is manifested through its architecture and dramatic appeal, further exemplifying its unique enchantment. The thought of New Orleans mimicking a “show” full of events, characters, stories, and props speaks upon its undeniable magical elements. The Tree of Life’s massive size acts as a stage to Audubon Park, in which all the people that play, observe, and sit under its inclusive waving branches are the actors or characters in the “story.” Such as Gilchrist’s story, Gus and Robert share an adventure in which they are the characters in a story with the oak tree as their main stage (2). In this case, Dessens specifically explores the significance of how the New Orleans oak trees “participate in the dramatization of the New Orleans space” (1). The significance of oak trees to the New Orleans community has caused groups such as the “Restore the Oaks: Art Under the Overpass in Tremé” project to form as a result of the uprooting of oak trees in the late 1960s to build Interstate 10 (1). The New Orleans African American Museum asked local artists to paint murals of the historic Tremé to memorialize the traditions, history, and the African American experience within the city in 2002, ultimately leading the “Restore the Oaks: Art Under the Overpass in Tremé” to form and bind the people of New Orleans together (1). Since the project formed, it has become a permanent art exhibition encapsulating life in the Tremé between Orleans and St. Bernard Avenues. The preservation of these beautiful, endangered, symbolic trees speaks upon its importance and vitality to all those that witnessed its presence. The extremely rare 160 foot wide Tree of Life exudes strength that is essential in preserving (3) while it’s mystical long braids of green moss flow around swiftly with dignity. Due to the rare beauty and age of the tree, the tree motivates people to advocate to keep them safe and commemorate their contribution to the New Orleans stage. The “Restore the Oaks: Art Under the Overpass in Tremé” project stated that their artwork depicted “the people, places, and events that have defined the area’s soul” (1). With the preservation of culture and nature being so essential to the people of New Orleans, it’s remarkable that Hurricane Katrina’s destruction still did not damage the city’s exceptional Tree of Life.

With its swinging branches glazed with green moss, the Tree of Life invites love, friendship, and prosperity under its shade. Acting as a playground, a place of rest, a place of union, and as a symbolic artistic monument – the Tree of Life embodies the soul of New Orleans in all of its glory. Further, the strength, size, and age of The Tree of Life makes the tree a resilient symbol in New Orleans culture – having survived through the uprooting of New Orleans oaks along with floods, disasters, and hurricanes. It is a magical landmark and “stage” with its roots deeply planted into the soil of the city, refusing to be uprooted, no matter what the obstacle.

What are the Best Spots for Photos in New Orleans? Check out this Location Guide! - New Orleans Family & Newborn Photography
Recent Posts on ViaNolaVie
Become a ViaNolaVie Patron!     Your donation supports the work of ViaNolaVie to: Provide a platform...