Editor’s Note: May we Mayke a suggestion? No, our suggestion is not that we stop using cringeworthy puns, but it is to think ahead! We know what’s coming: the summer. The time when the air is heavy, the tourists have abandoned ship, and us locals are left to enjoy our city, heat and all. That’s where we come in! All the month of May we are going to prepare you to “Ban the Boredom” by giving you the best places, the best restaurants, and the best event, but since we never do anything “normal” at ViaNolaVie, we are basing these suggestions around various psychological states! If you’re a total introvert, we’ve got a spot for you! If you have a disability, we’ve got the places that actually don’t discriminate and let you get down the way you want to get down. We’ve got something for everyone because New Orleans is the city for everyone! Up next, maybe you’re sick and tired of staying in your house and streaming shows; yet, you love those shows. Have no fear, writer Ella Siev has your best city reality TV show, and it takes place in Audubon Park.

According to The Prindle Post, in college, “students are exposed to, live with, and befriend people from different regions, with different customs and worldviews. Ideally, this experience teaches them how to interact with other members of society after graduation.” Yet, in the wake of Covid-19,  a student at the University of Michigan explains that after the pandemic, “[she] started thinking about the term ‘social battery’ a lot more … and it feels like I’ve now acquired one. I feel that before I hang out with people I need to take some time for myself, either by taking a walk around campus or listening to music alone. I have to ‘charge’ my ‘social battery’”.  At Tulane University, a university located in the city of New Orleans, and ranked #1 party school in the country by publications such as Niche.com and Newsweek, there is an abundant need for students to recharge their social batteries.  Along with the need to recharge, however, comes the fear and anxiety of loneliness – the word being defined as “the negative emotional response to an experienced discrepancy between the desired and actual quality or quantity of one’s relationships” (Perlman & Peplau, 1981). However, there is an answer for how to be alone and recharge while also not feeling lonely; it’s called “the act of people-watching.” 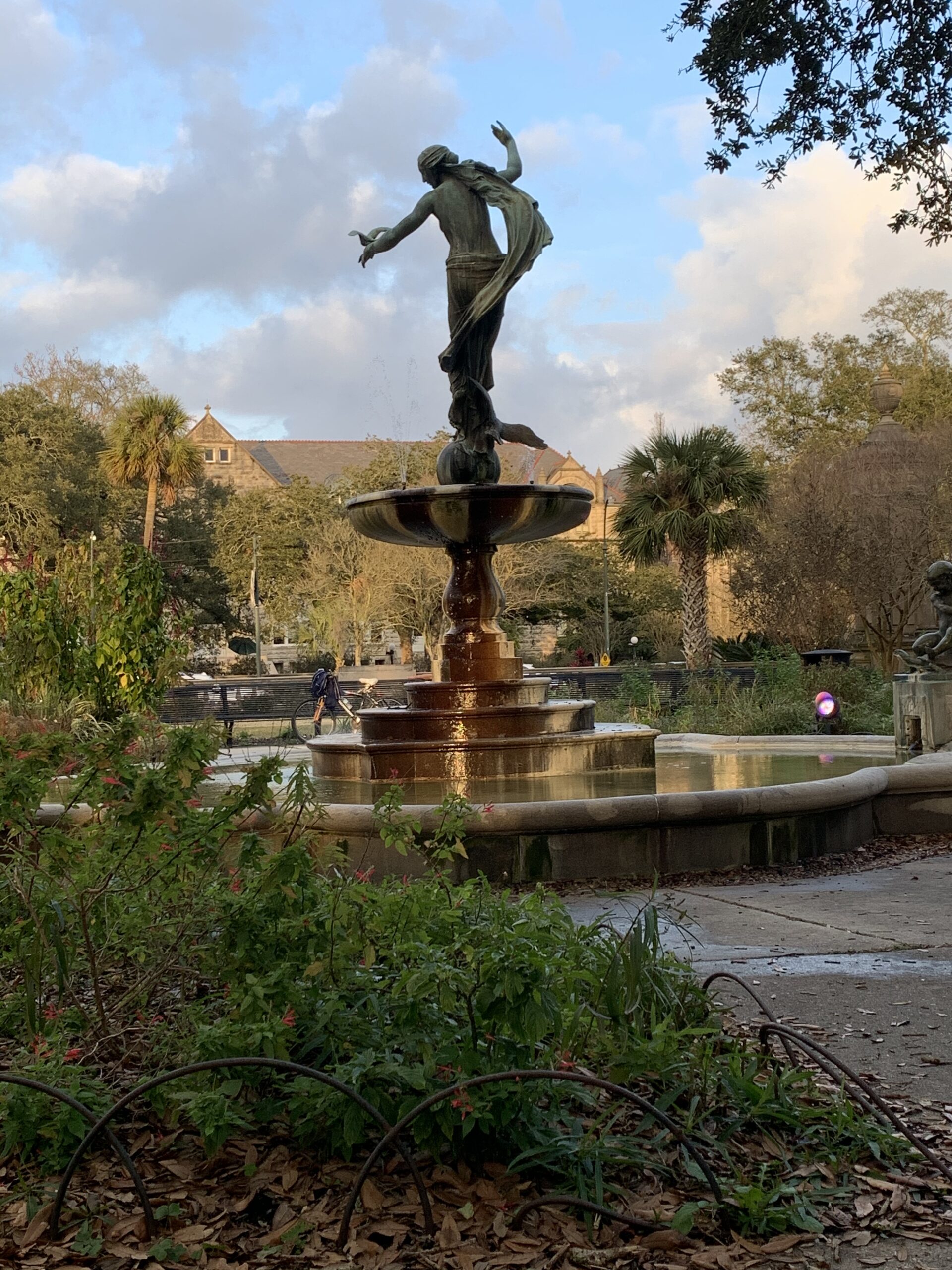 A fountain alongside the loop in Audubon park

While “Observing people in each other’s company and making sense of their encounters, an endeavor sometimes referred to as people-watching, is widely known as an entertaining pastime. From a psychological perspective, however, this activity also signifies an impressive cognitive feat”, and right across the university’s admissions building, on historic St. Charles Avenue, lies Audubon Park, aka, the mecca of people-watching (Quadflieg, Penton-Voak). The park is home to almost 300 acres of public greenery including sports fields and lounging areas, a golf course, a zoo, and most notably to me, a 1.7 mile walking, jogging, and biking loop.

Though Audubon Park is located near Tulane, it also lies within uptown New Orleans in the neighborhood known as Audoubon. The neighborhood spans over 2.28 square miles and, as of 2010, boasts a population of 7,319. This population breaks down into 47% male, and 53% female. Additionally, the neighborhood is made up of 89.99% white collar workers and 10.01% blue collar workers with an average yearly income of $100,041 which is a stark comparison to the rest of New Orleans whose average yearly income is just under $30,000 less than the residents of the audubon neighborhood. While observing along the man-made pedestrian trail, the viewer gets a glimpse into the privileged lives of those who make use of it. Much like when watching reality TV shows like Keeping Up With The Kardashians, I have found that the demographic surrounding the park creates a cast of characters that makes me feel like I am watching the most realistic episode of a reality show. On the sunny and crisp winter day of February 13th 2021, I set out to recharge my social battery the only way I know how; by tuning in for another episode of my favorite reality show- People Watching in Audubon Park. 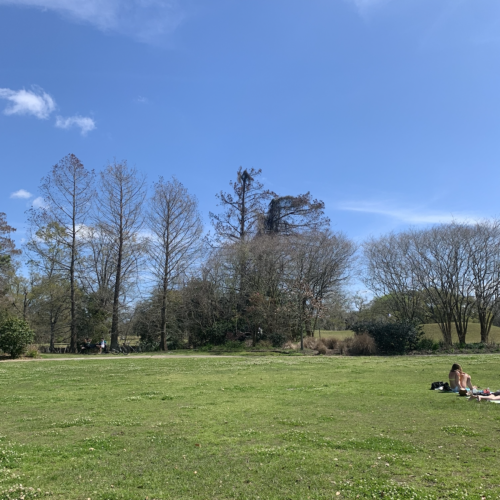 An open field in the park

The first act of February 13th’s episode brought in a character from Tulane University. I first caught a glimpse of him when the bright green wheels on his rollerblades graced the pavement in front of me. I looked up to find him donning green and red plaid pajama pants, as well as a bright green sweatshirt with his fraternity letters stitched onto the front that matched the wheels on his blades. Though I knew nothing about him, I was able to get out of my own head for a few minutes and began thinking about what possibly could have compelled this college-aged boy to roll out of bed, keep on his pajamas, but go for a solo blade in the park. Being able to think about something other than my own life, I felt my social battery recharging. This idea is known as the practice of catharsis, which is defined as “the process of releasing, and thereby providing relief from, strong or repressed emotions”. Furthermore, esteemed psychologist Mehmet Eskin explains that “If cathartic reactions are evoked by observing emotional scenes and processes in the environment, this is called dramatic relief. The individual’s experience of catharsis by observing the scenes in the external environment and feeling a great relief as a result is as old as the history of humanity and it is very common.”

During the next act, I was really able to distract myself as I observed a character who was clearly not a college student. .He was an attractive man who ran past me with a few wrinkles on his face as well as a dark brown head of hair that was beginning to gray with age. He was taking a phone call on which he yelled “yeah.. My ex-girl friend” in a rather condescending tone. He wore a vintage looking NYU alumni sweatshirt and the rest of his outfit was marked in Lululemon logos. The headphones he conducted his phone call through cost just under $250, and all of his Lululemon pieces cost at least $80 each. Furthermore, a year at NYU costs just under $55,000. Based simply on all of these things, I made the safe assumption that he belonged to the white-collar majority of the neighborhood. My mind flooded with hypotheses of what happened with his ex-girlfriend, what he did for a living that enabled him to live his life the way he does, and even what brought him from NYU to New Orleans. The reason for being drawn to watching those who are more successful than us, whether it be on TV or by people watching is simple;” it is based on the desire to be part of a specific crowd of people.”

Though recharging one’s social battery is usually thought of as a socially isolating activity, that is not always the case. As many sociologists before me were able to discover, “Humans are inherently social” (Young.) This means that for some, myself included, recharging can be done in a way in which one is alone, but not lonely. The location of Audubon Park attracts a mix of New Orleans locals as well as Tulane students.. I know that whenever I get overwhelmed, I can always head to Audubon park and tune into another episode of my favorite reality show.